A Vegan Foodie’s Guide to Jordan 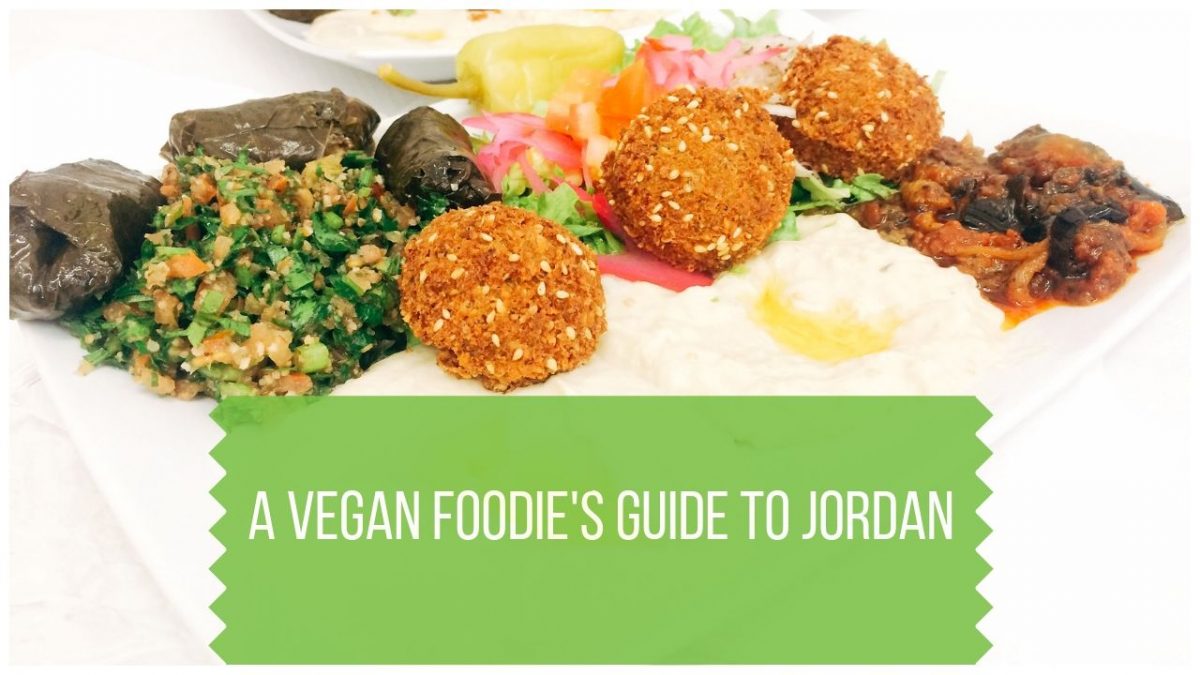 The traditional foods of the Levant region are a perfect match for a vegan diet. Jordan is no exception and is a wonderful destination for any foodie, including vegan ones.

Historically, food from this part of the Middle East was very light on meat and other animal products, with legumes, rice, fruit, vegetables, olive oil, and bread making up the bulk of what people ate.

Read More: Vegan Food in the Middle East -- A Match Made in Heaven

By sticking to the basics of Middle Eastern cuisine, though, you can follow a very healthy and varied vegan diet. Even though a lot of Jordanian dishes today can be meat-heavy, there are also plenty of options for vegans traveling to Jordan.

Of course, veganism is still a new concept to many Jordanians, but it’s something more and more people are coming to understand.

Read More: How to Be an Animal-Friendly Tourist in Jordan

So, since the majority of the cuisine here is inherently vegan, there is plenty on offer. And the best part? It’s all flavorful and delicious!

In this post, I will show you how following a vegan diet while travelling in Jordan is not only possible but also satisfying, fun and tasty. 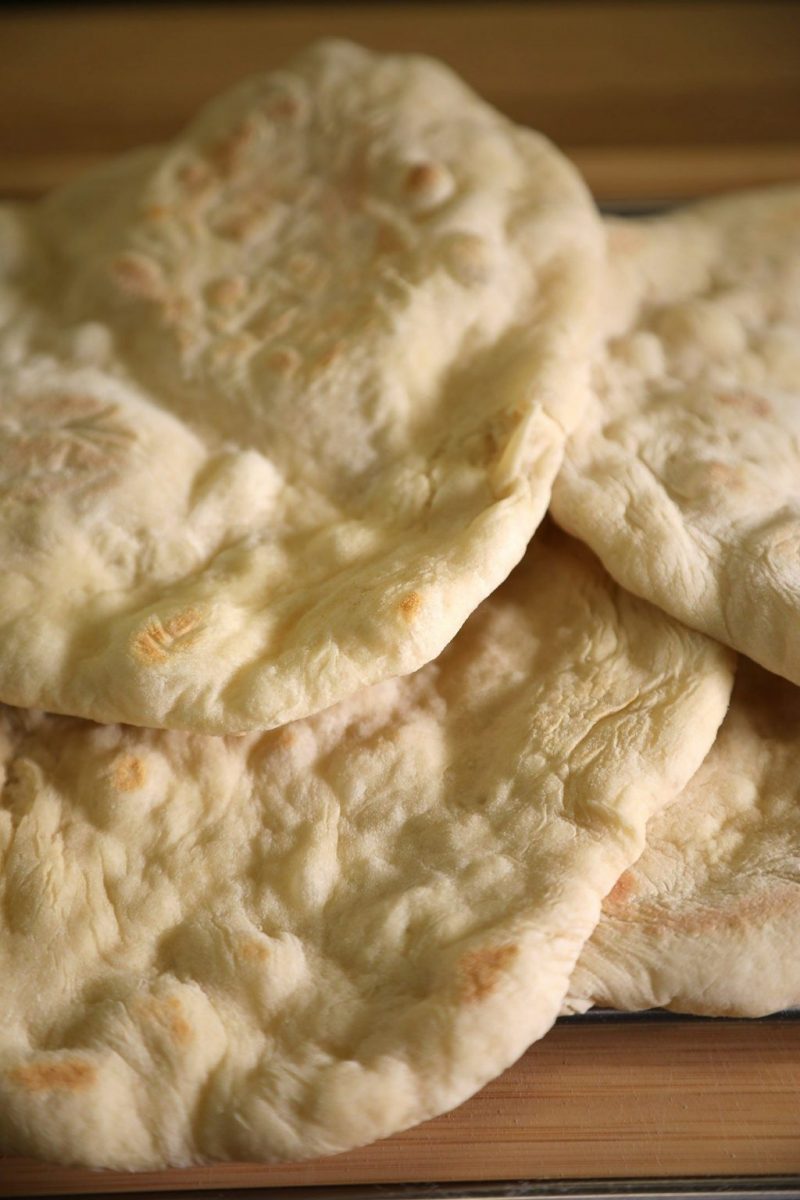 Traditional breakfasts in Jordan are hearty and substantial affairs. Like in many places, these breakfasts evolved during the time when most people still worked the land and needed the right kind of fuel to keep them going.

For many Jordanians, breakfast consists of a selection of protein-rich dishes. One of the most popular dishes is ful - a warm dish of fava beans, garlic, lemon juice, olive oil and chili (with many variations on this theme depending on personal preferences).

Ful is often paired with delicious taboon bread, which is made by baking dough over hot stones. This is what gives the bread its signature bumpy look and exquisite taste. This dish will definitely keep you feeling satisfied until lunchtime.

Other options for breakfast will very often include hummus, falafel, olives, pickles, fruit, baked breads with olive oil and za’atar. Za’atar is a very popular herb mixture that is often eaten on bread with olive oil.

A popular place to eat these foods is at one of the branches of Abu Jbara, a restaurant that serves one of the very best breakfasts in the capital.

Another very popular place is Hashem restaurant in downtown Amman. This one has been around forever and is a favorite of many locals.   are all commonly found on the dinner table, both in Jordanian homes and at restaurants. 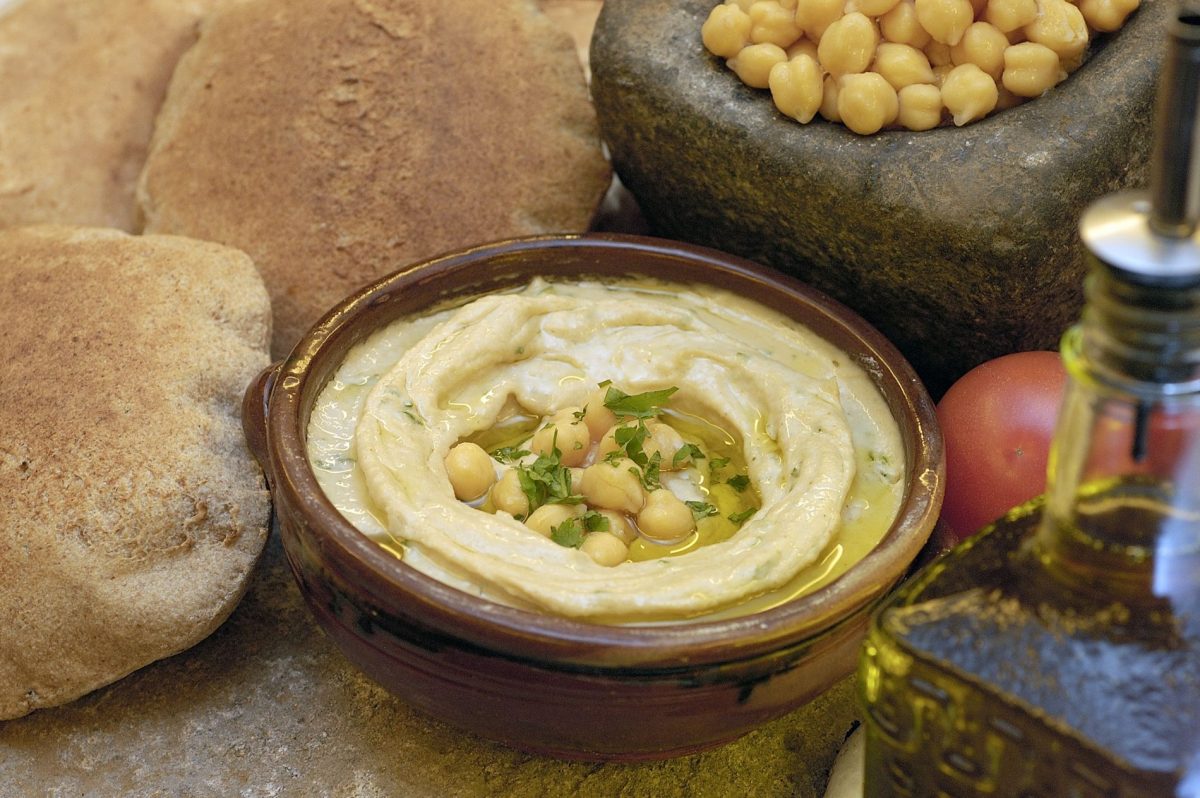 Hummus, a worldwide vegan favorite, is a staple in Jordan.

There are so many vegan friendly dishes when it comes to the main meal of the day in this part of the world. Often the simplicity of the dishes is what makes them so tasty.

One of my favorites is as simple as split lentils cooked with cumin and made into either a soup or something more like dahl and served over rice. Another great dish is bamia, which is baby okra cooked in tomato and olive oil.

And so many salads, such as tabbouleh, fattoush, or a simple salad of tomato, cucumber and onion with olive oil and lemon juice, are found in local restaurants.

If you’re on the go, a tasty lunch option is a falafel sandwich like the ones they make at a takeout place called Jerusalem on Rainbow Street. Many Jordanians swear that this is the best falafel in Jordan.

I can concur, and I encourage anyone who comes to town to try it for themselves. In fact, the king of Jordan is often spotted there with his kids as they collect falafel sandwiches to go. Whether eaten in a palace or on the sidewalk outside the restaurant, these are truly glorious sandwiches.

Other foods include mujadara, a dish of rice and whole lentils with fried onions and salad. Or there’s koshary, a meal of rice, lentils, and macaroni. 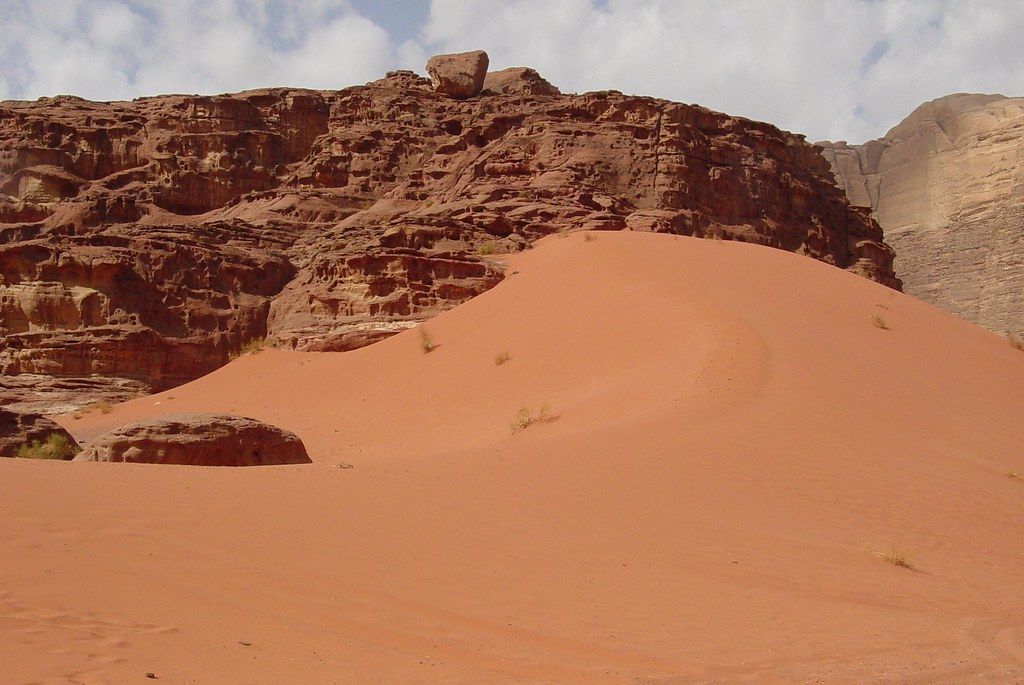 The gorgeous desert scenery at Wadi Rum in Jordan

Baba ghanouj, a dish of baked eggplant mixed with tomatoes, garlic, peppers, and tahini, is a very popular food for lunch. Hummus is also a popular lunchtime food, and pita bread stuffed with lettuce, tomatoes and pickles and topped with hummus is a delight to eat.

Green leafy vegetable dishes abound, including mulukhiyah, more commonly known as nalta jute, which is packed with nutrition and goodness. It’s traditionally cooked with chicken but can easily be made using chickpeas as a substitute.

Freekeh is made with green wheat and can be loaded with lots of legumes and vegetables to make it a heartier option. Squash and peppers stuffed with rice and bulgur wheat and flavored with garlic and spices is one of my favorites. The list of delicious vegan dishes in Jordan goes on and on.

Want to explore more of the Middle East? Beirut in Lebanon also has a great vegan scene. 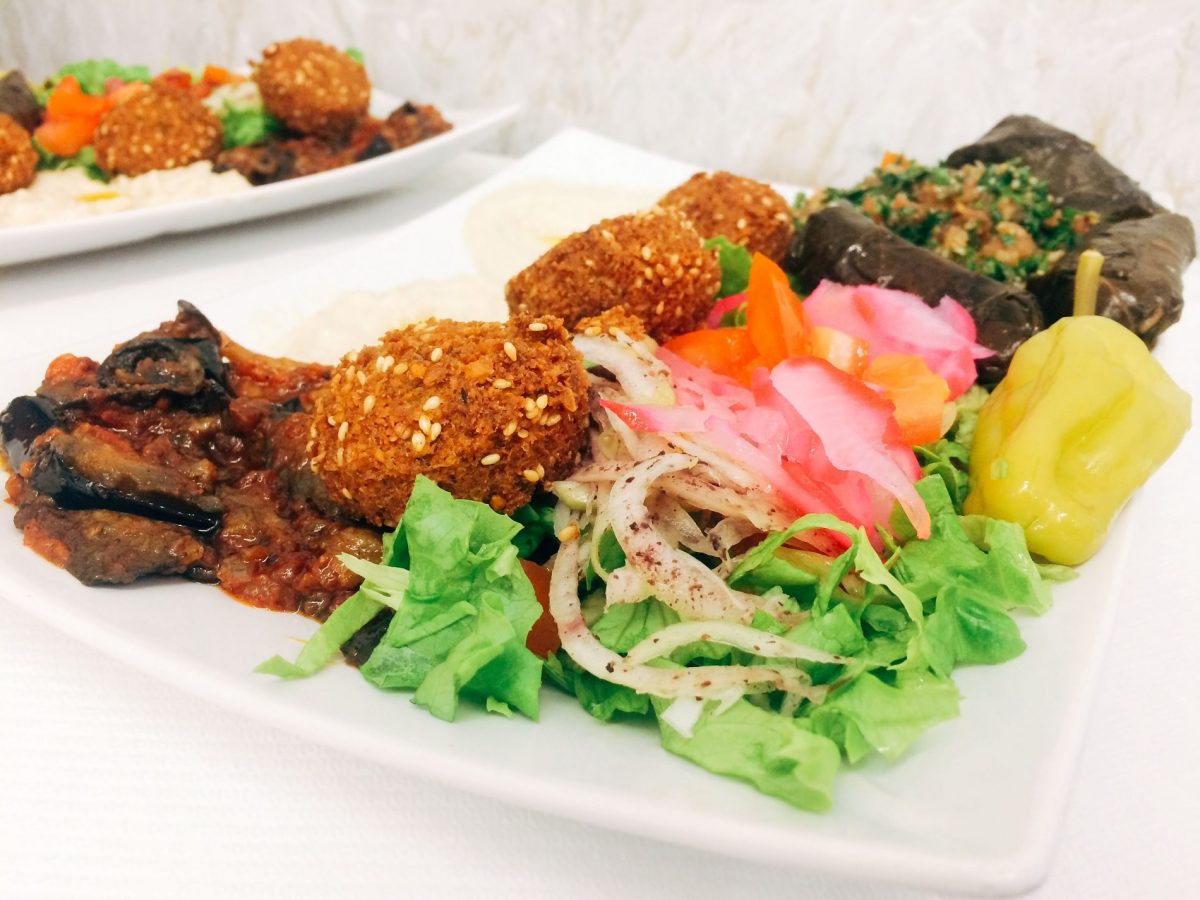 Dinner in the Levant is the lightest meal of the day and is usually a combination of small plates known as mezze. One vegan example is a dish of green beans cooked with onions and kidney beans in olive oil served cold.

A mixture of tahini and pomegranate molasses is a sweet yet nutritionally dense option. Or you could try sliced, baked eggplant flavored with sumac and a little bit of salt and olive oil.

Muhammara is another local favorite. It’s a dip similar to hummus but is made with red peppers and nuts and served with bread. Flatbreads flavored with herbs and spices are eaten alongside salads that feature vegetables such as beetroot, fennel and spinach.

Hashem has been attracting many visitors to Amman since 1952. Located in downtown Amman close to many hotels and attractions, it’s one of the most popular restaurants in the city. Most of the seating is outdoors, so you can get the full feel of the bustle of downtown eating here.

There is no menu, but they serve traditional dishes that won’t disappoint. The best part is that Hashem is a vegetarian restaurant, so it’s very vegan friendly!

Jafra is hidden at the end of a stunning old archway off the main street in downtown. If you’re not paying attention, it’s easy to walk past and miss it!

The menu is extensive and caters well for both vegetarians and vegans. It’s popular with locals, which is always a good indicator of the quality of the food.

Situated in a beautiful old building, Shams el Balad sports an impressive terrace overlooking the city. The meat-free menu is creative and will take you on a culinary journey of Jordan.

This is one place where you can taste the freshness of the ingredients. The chefs here work with local producers and really focus on the farm-to-table concept.

Primal is the first paleo restaurant in Amman, which may not seem like an obvious choice for a vegan. However, they have a wide variety of fruit and veggie dishes as well as an impressive vegan dessert menu.

It’s based in posh Abdoun, so visiting this restaurant will take you into a neighbourhood most tourists wouldn’t see. The area is home to many embassies and expats and offers a unique take on Amman life.

Sufra is a must-visit for anyone traveling to Amman. The restaurant embraces Jordanian food culture better than anywhere else. Be sure not to miss sitting out on their beautiful open-air terrace.

It also has plenty of vegan friendly options, and one not to miss is their delicious eggplant salad!

My favorite thing at the Wild Jordan Centre, apart from the view, is their seasonal menus. You’re always guaranteed a wholesome and hearty meal here! And the views over downtown Amman are truly unbeatable.

Their menu has plenty of vegan options and is clearly labelled in English, making it an easy option for foreign visitors.

Most restaurants will have English speaking staff and an English menu. But in case they don’t, here are some key Arabic phrases you may need:

People in this region of the world will go out of their way to help you find what you need if you just ask. Hospitality is prized as one of the highest honors someone can bestow on another, especially on a visitor from a foreign land.

If you explain your diet, you can rest assured that whatever establishment you visit will do their best to accommodate you.

You will have a wonderful time trying all the vegan food that’s on offer in Jordan. The spicing, combined with the flavours of fresh produce, makes the food here quite unique, delightful, and delicious.

Please don’t let being a vegan deter you from visiting this country. In addition to enjoying great food during your visit, you may very well influence Jordanians to join you in the benefits of a plant-based diet. 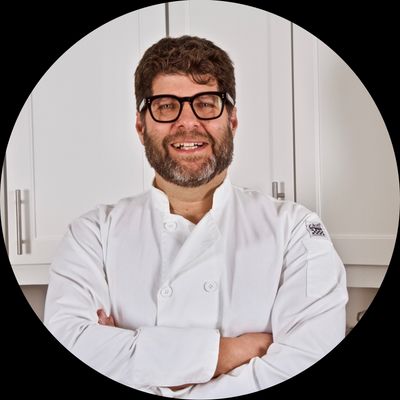 Tariq Nasir is an American-Palestinian food blogger and the founder of ChefTariq.com. He empowers the everyday home cook to bring Middle Eastern cuisine to their table. 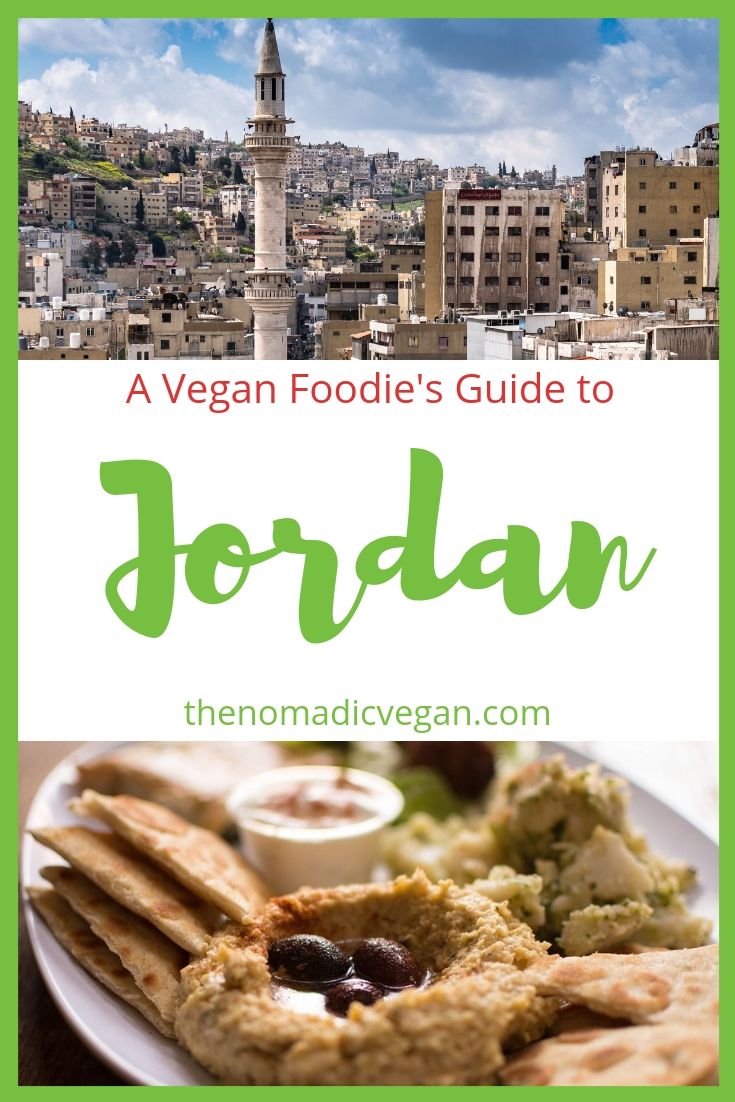