How to Eat Well as a Vegan in Mexico 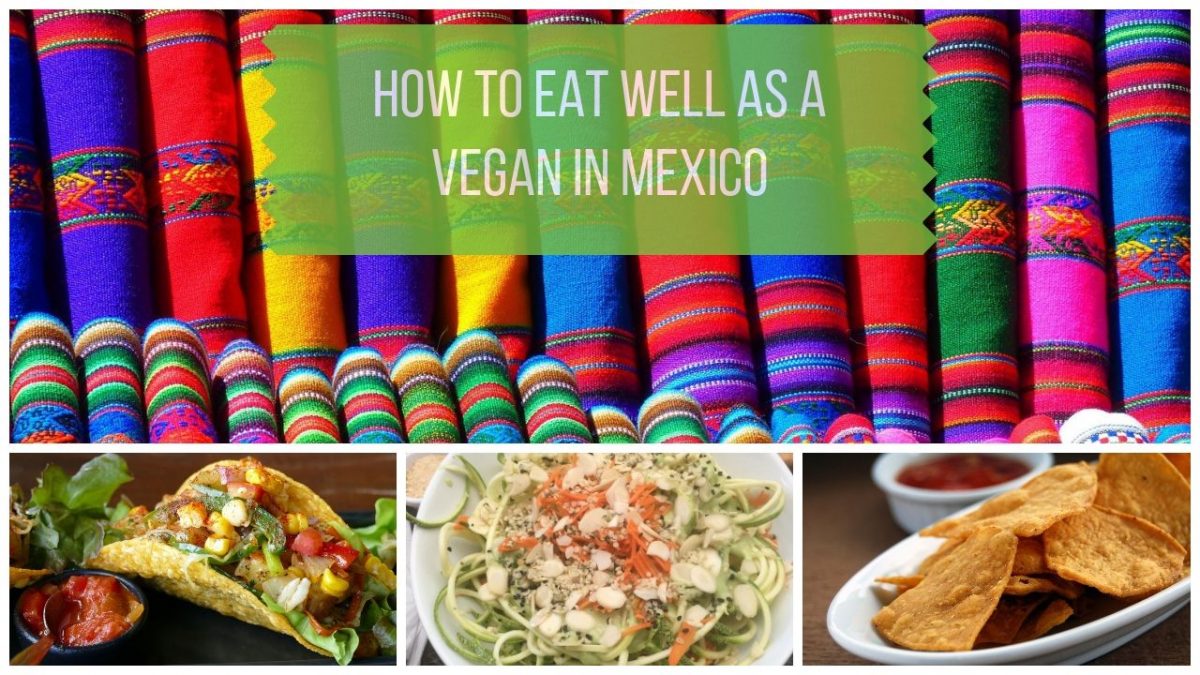 The Growing Vegan Movement in Queretaro

Vegan tacos? In Mexico?? Seriously?? Absolutely! And those can be found on virtually any block. You just need to know what to look for.

The last time my husband, Alejandro, and I traveled to Mexico as vegans, it was a short trip and we spent most of our time with family and friends. That was in 2010, and Querétaro wasn’t exactly bustling with vegan activity.

This time, however, we are here for two months and are definitely settling in for a bit. Six weeks into our stay, we’ve had ample opportunity to get out and explore the scene, and we can honestly say that we’ve been more than pleasantly surprised by the variety of vegan Mexican food available.

Lucky for us, days after our arrival Veggie Fest Querétaro was happening. Once a month, on either the first or second Sunday, Veggie Fest Querétaro takes place right in the historic downtown, which is the perfect way to get acclimated to the local Mexican vegan food scene, including products, foods, and businesses that cater to vegans. 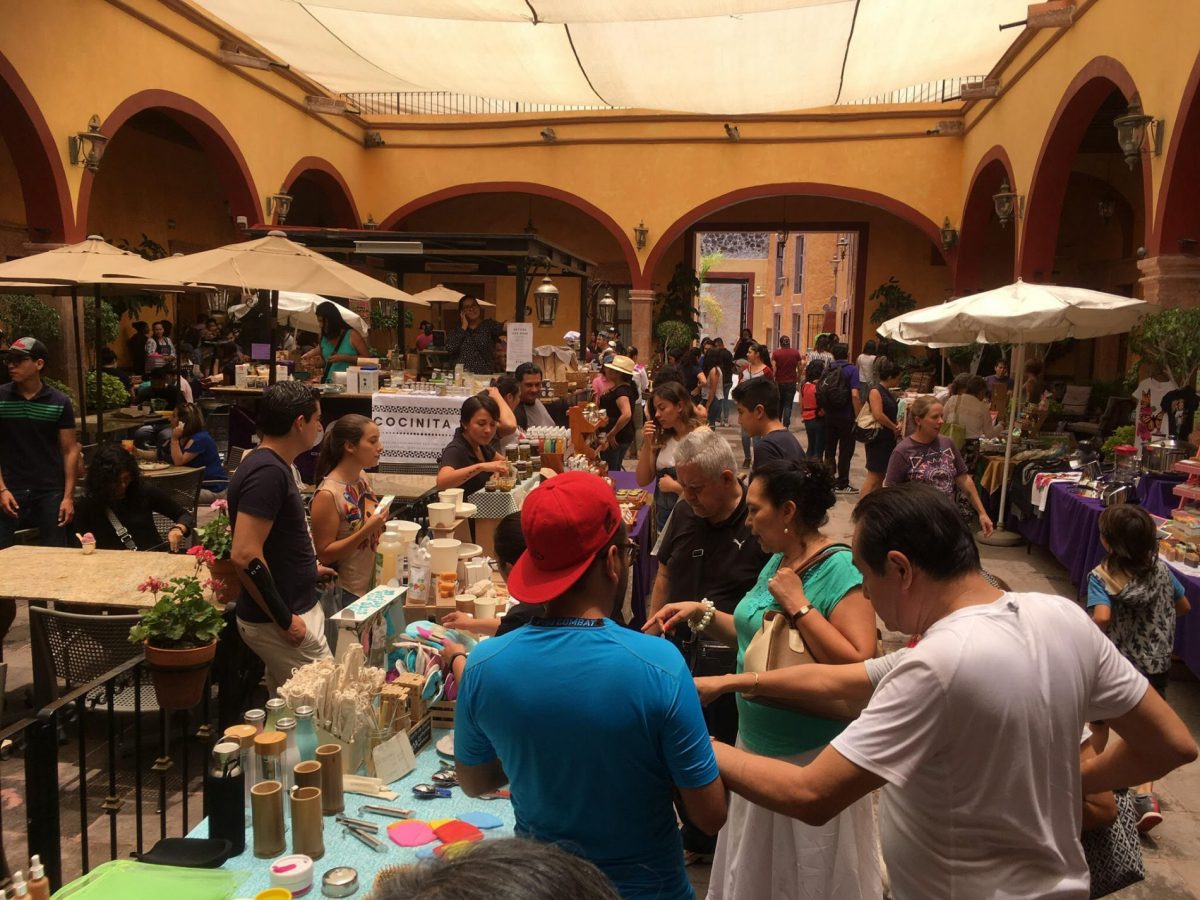 For any vegans visiting the area, Veggie Fest Querétaro should be on the top of your list of things to do in Queretaro Mexico.

VFQ is held in the courtyard of a sweet little vintage hotel and seems to me to be just the right size to spend a couple of hours perusing the natural and organic products, sampling artisanal foods, attending a talk or workshop, and making your purchases. And of course, enjoying a delicious vegan Mexican dish for lunch!

The organizers also put on a similar event in nearby San Miguel de Allende on or around the third Sunday of the month. You can find all the details on the event’s Facebook page.

I used the Facebook group Veganos en Querétaro to make contact with locals and find the most popular recommendations. The number of restaurants in Querétaro offering either a full vegan menu or at least vegan options is pretty impressive. Let me share with you some of our favorites that we’ve found so far: 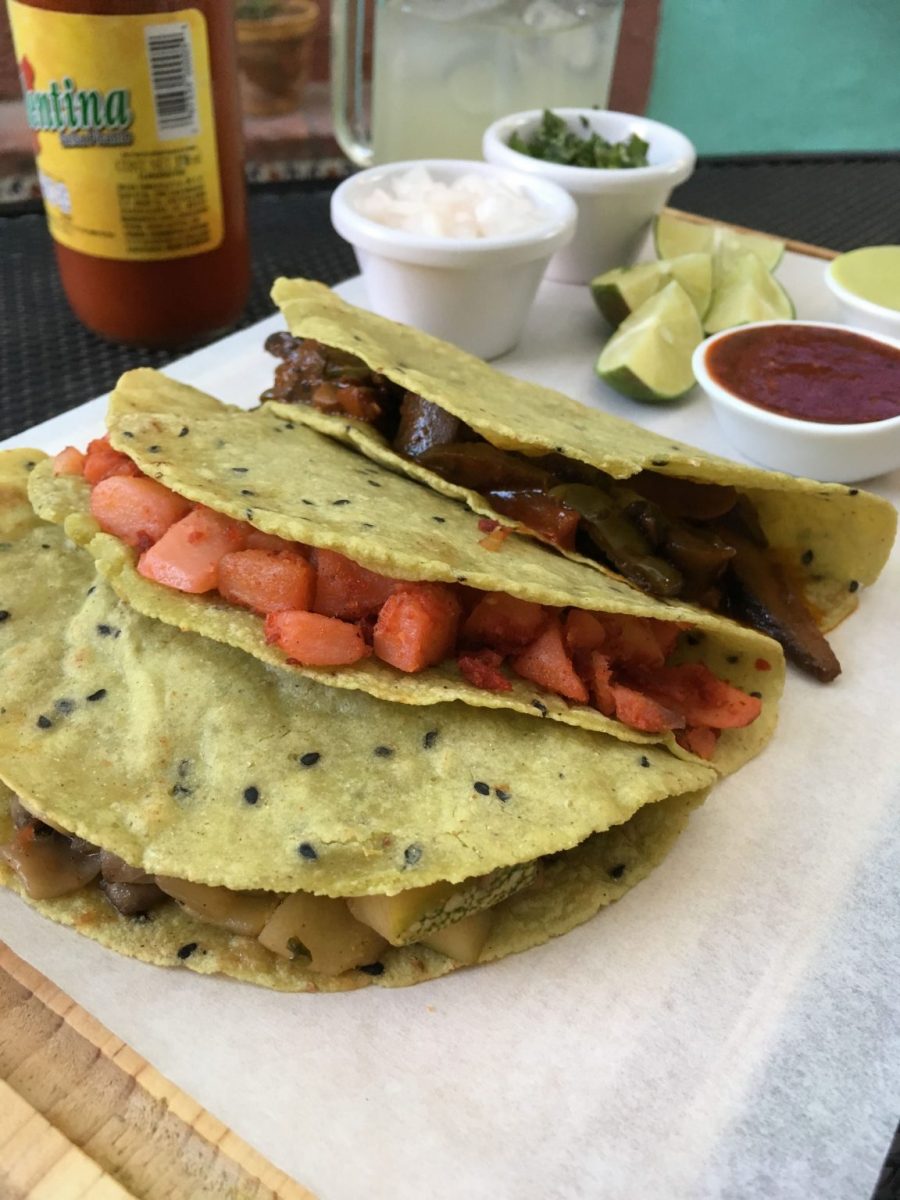 A sweet little spot in the historic downtown tucked away in a courtyard with some other restaurants and a tiny theater. It’s a great place to go if you’ve got some omnivores in the bunch, as each person can order from the restaurant of their choosing and everyone eats together at a table in the courtyard.

TacoGreen specializes in, of course, tacos, but don’t let that stop you from trying something else on the menu. The veggie burgers are super satisfying, and if you need a serious hit of veggies, don’t miss the raw zucchini noodles bowl.

Oh, and be sure to leave room for dessert, as they’ve always got half a dozen options, including at least of couple of raw items, although we are partial to the chocolate cake (not raw). Gluten free also available. 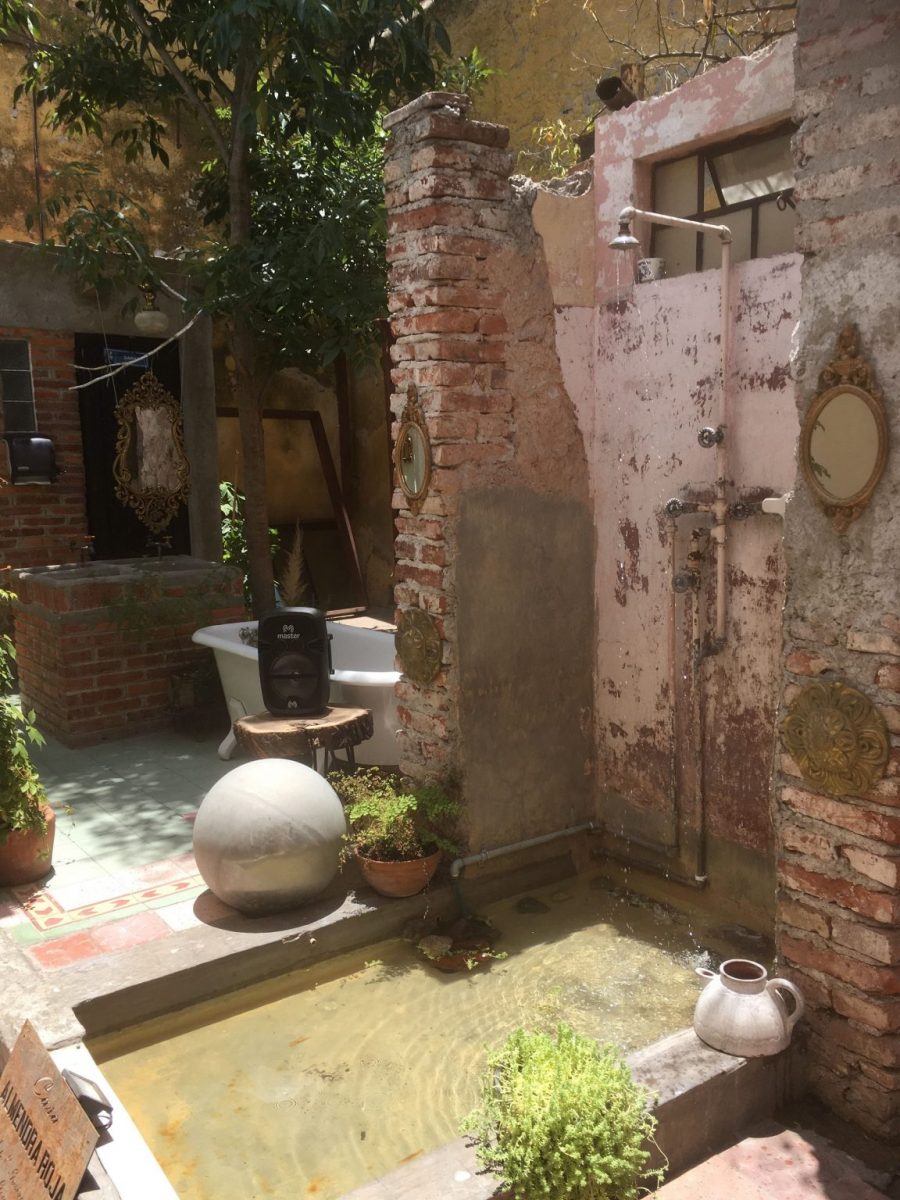 Talk about an idyllic location! Coco Amor is in another beautiful courtyard downtown on bustling Cinco de Mayo Street. The day that we went, the owner was short on help, so the limited menu available included burgers, hot dogs and sandwiches.

However, normally they offer lots of typical specialties including enchiladas, ceviche, and chiles rellenos. And the decor is sweet and relaxing, a perfect spot to kick back and relax while you wait for your food. Cinco de Mayo Street is filled with shops, theaters, bars, hotels, etc., so you can have lots of fun poking around the area.

Located just a few blocks west of the city center, Suwa is a tiny place that offers breakfast and lunch. Considered to be one of the best vegan restaurants in town, their focus is on local, organic, and sustainable food.

Breakfast includes chilaquiles (corn tortilla chips lightly fried and covered with a spicy sauce), oat pancakes, and house-made chorizo. The lunch menu is always “comida corrida,” a set menu that changes daily and includes an appetizer, soup or salad, a main dish, a raw dessert, and a glass of fruit-flavored water.

As part of their sustainability efforts, Suwa doesn’t offer single-use packaging or do UberEats. You can, however, bring your own containers for carry out.

For the best tamales with a great selection of vegan options, look no further than Envuelto en Hojas (“Wrapped in Leaves”). They’ve got both sweet and savory tamales and two locations in town. Simply the best!

Querétaro also has an abundance of Tiendas Naturistas, which are handy for vegans who wish to self-cater while traveling. These are natural food stores where you can pick up most of your staples for cooking at home or snacking on the road.

Super Naturista is conveniently located right downtown on Juarez Street. City Market is the upscale version of a traditional grocery store in the swanky suburban Antea Lifestyle Center. While it’s certainly no Whole Foods, you can find a decent selection of gluten free and vegan products, Asian products, essential oils, and wine and liquor. Don’t expect a lot in the way of organic produce, however. 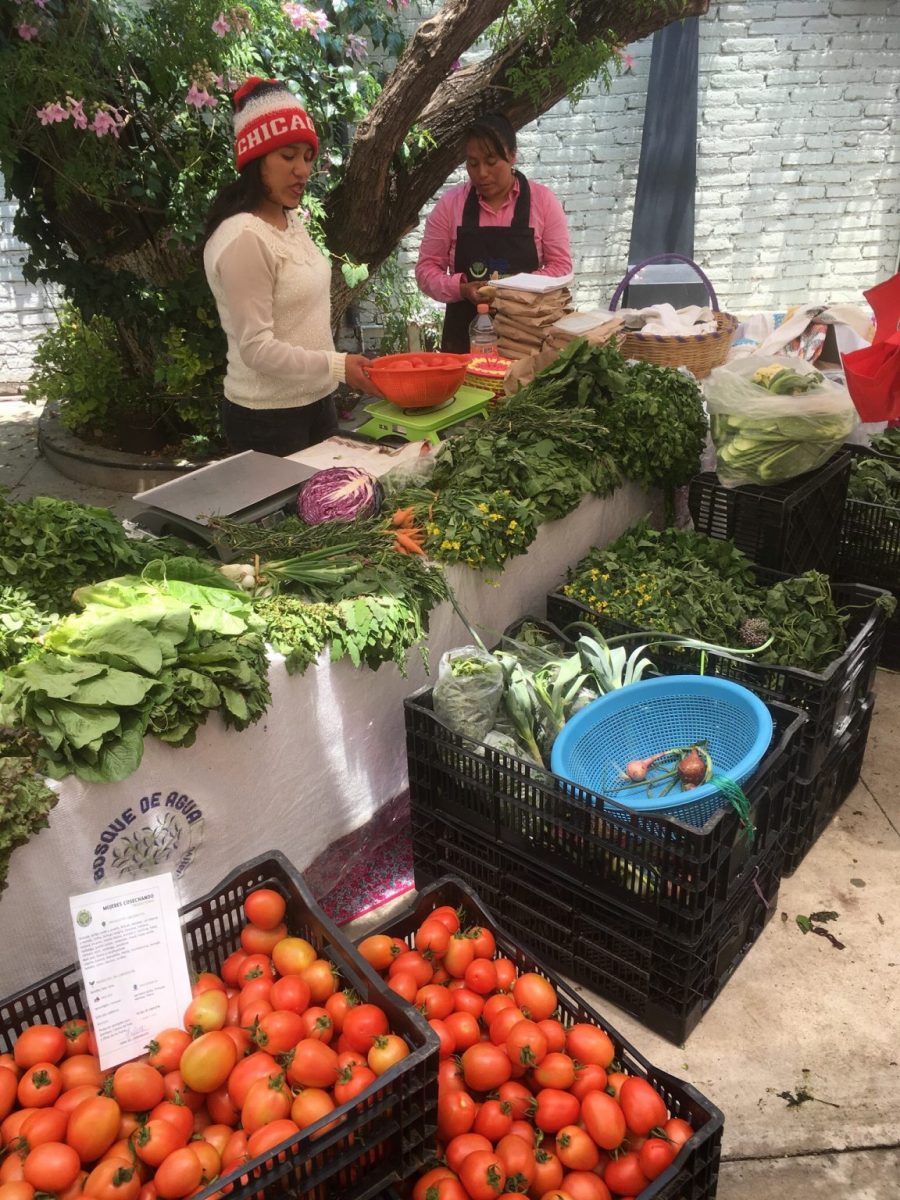 For organic produce, the place to go is Tianguis Bosque de Agua on Saturdays from 9am to 3pm in the Los Alamos neighborhood. It’s an American-style farmers’ market where all the vendors are certified organic, with certain products in transition to organic.

We were able to find fruits, vegetables and fresh herbs, bread and sweet treats, tortillas and other corn products, plants, freshly ground flour, jam and agave nectar, personal care products and even wine.

If the Saturday market doesn’t work for your schedule, there’s always Costco for organic produce.

The regular markets (including Mercado de la Cruz and Mercado Escobedo) have very little as far as organic produce is concerned, but they are definitely lively places to shop with excellent prices. Vegans will want to steer clear of the meat sections, however.

Top Things to Do in Queretaro Mexico 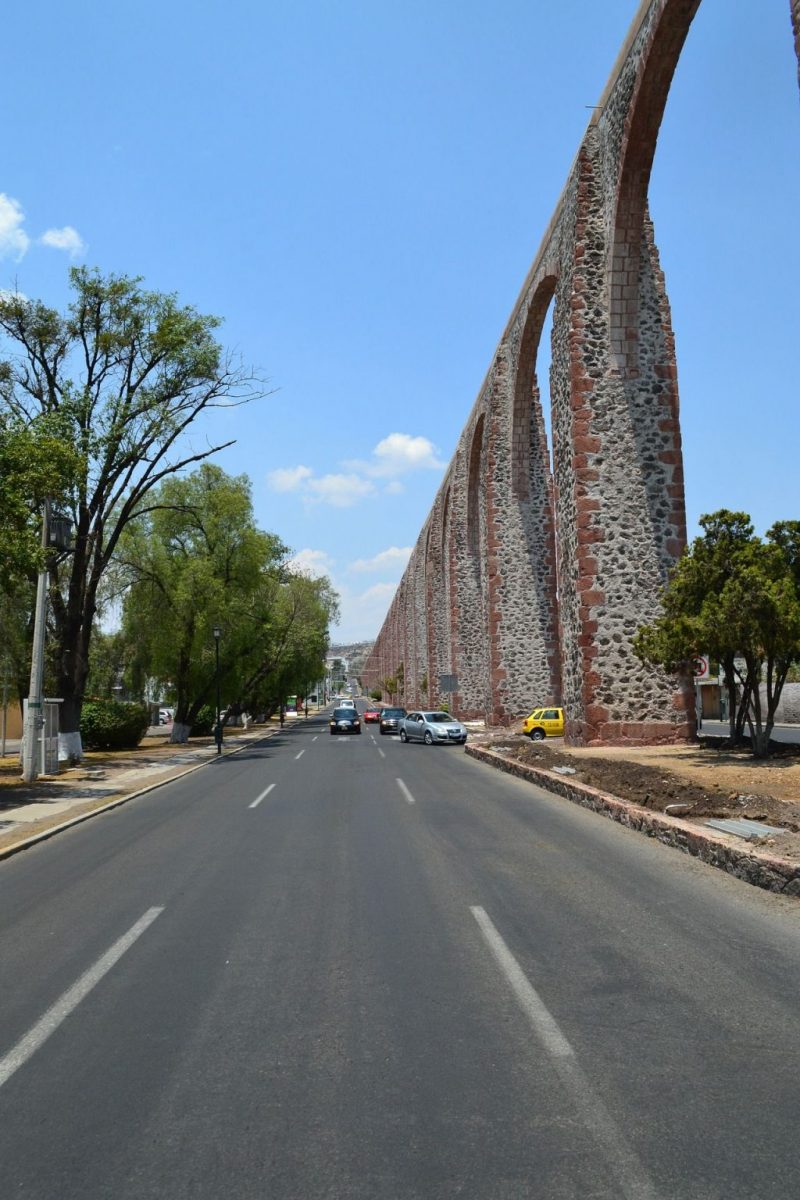 Now, why would you want to come to the middle of Mexico as opposed to the beach? Lots of reasons! If you’re wondering what to do in Queretaro, check out these activities that are available in the area:

●        Explore the history. Queretaro was where the fight for Mexican independence started, and it is a UNESCO World Heritage Site. The Aqueduct is one of its most notable features.

●        Check out the wineries and arts and crafts in charming Tequisquiapan, less than an hour’s drive away.

●        Experience the arts and crafts of San Miguel de Allende, a shopper’s paradise with a lively expat community.

●        Spend a day at one of the spas located just a short drive north of San Miguel de Allende. Your body will thank you! 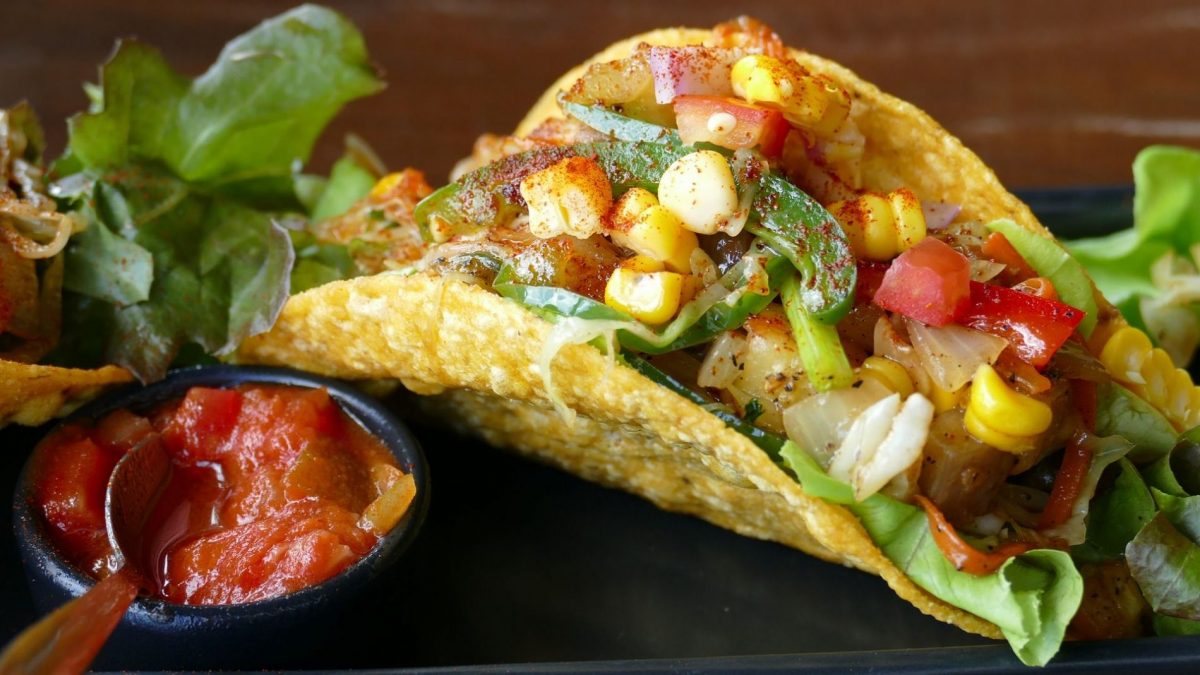 So, about those vegan tacos that I mentioned...It wouldn’t be Mexico without tacos, right??

The easiest way to scope out the vegan ones is to look for the sign “tacos de guisos,” which means stew tacos, and they will likely have at least one of the following three varieties: champiñones (mushroom), nopal (cactus paddles), or papa (potato). Cebolla (onion), arroz (rice) and frijoles (beans) are also common taco fillings.

There are also a few places that make a “meat-style” vegan taco from soy. The best vegan street tacos we’ve found are at La Take near El Mercado de la Cruz.

Some other naturally vegan foods that you can find most anywhere in Mexico: 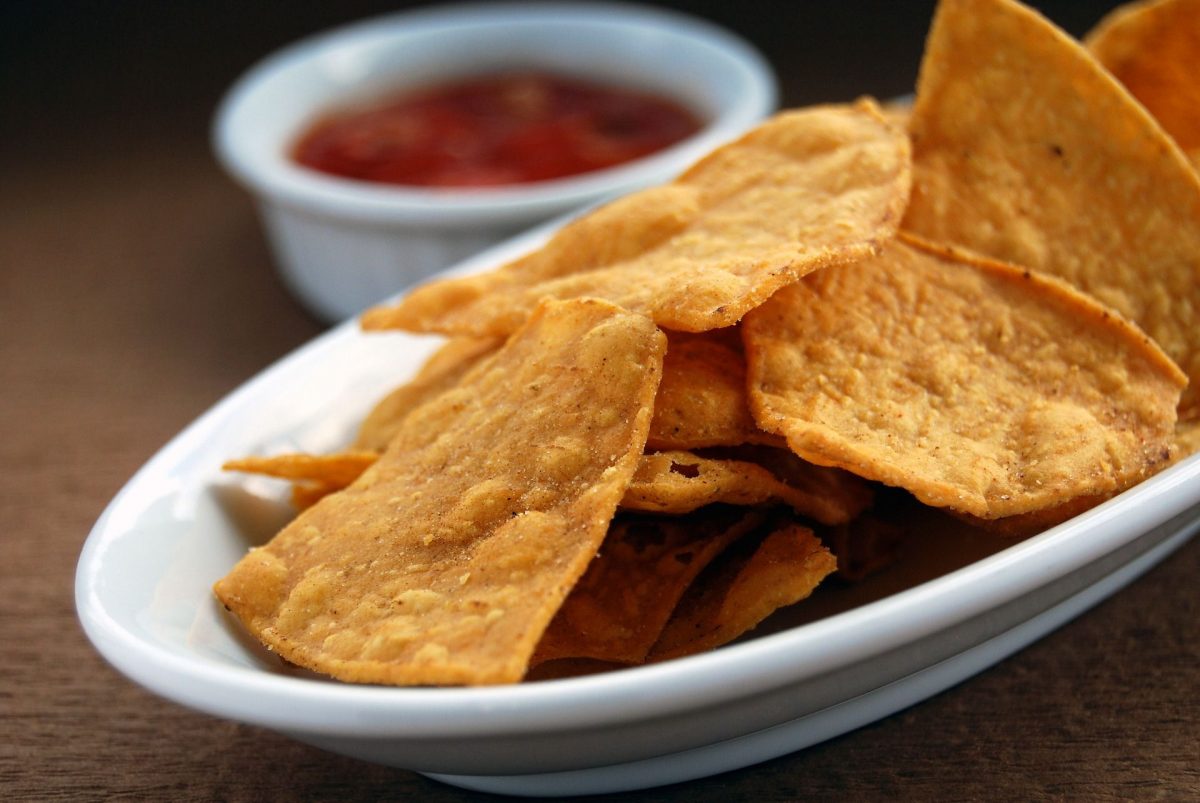 Still not convinced that Querétaro is the place to be in Mexico? Or perhaps you’re looking for some quiet rest and relaxation, and maybe even a little bit of pampering. Here are a couple of resorts in Mexico that cater for vegans.

This raw and vegan retreat center in the Yucatan Peninsula offers personalized hospitality and an intimate atmosphere in a historical, colonial house.

This wellness center in Cabo San Lucas offers a number of amenities, including a gym, jacuzzi, and a traditional temazcal steam bath. The hotel runs a fully vegetarian kitchen and offers lactose-free, raw and vegan options. 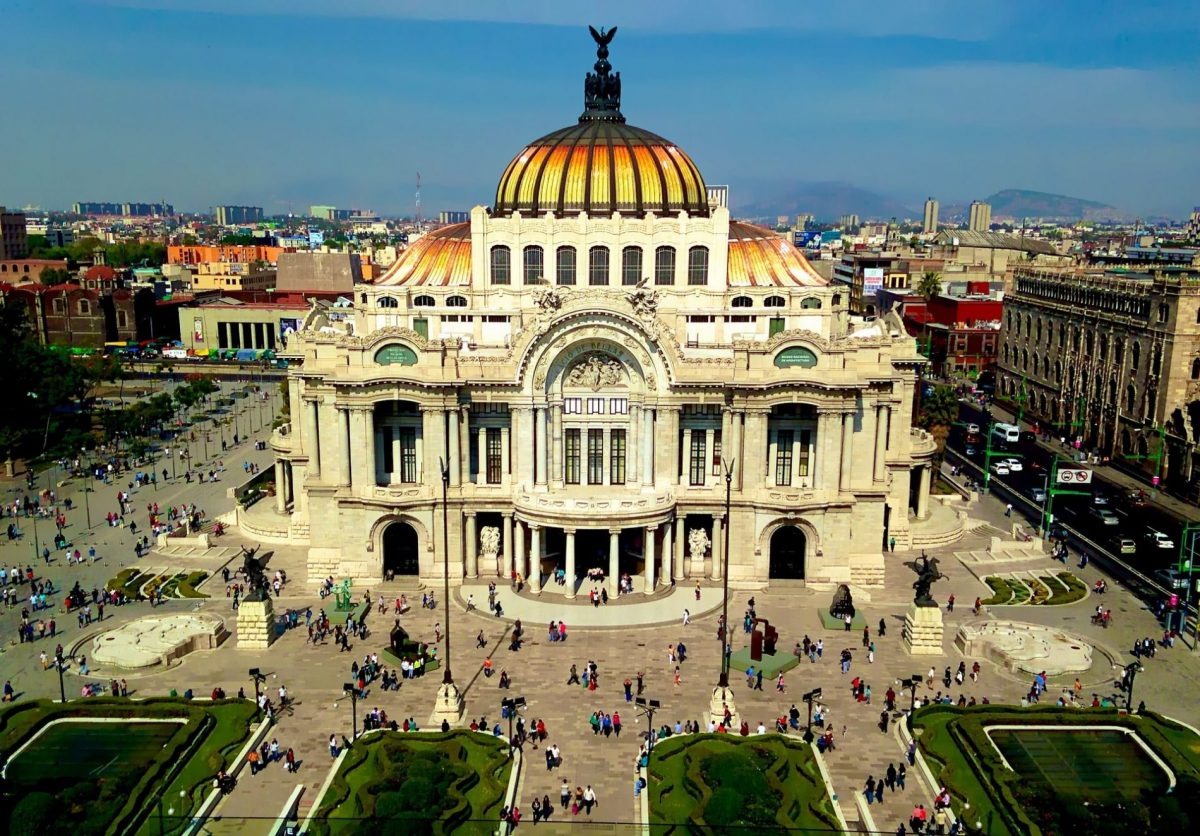 Or do you want to experience the buzz and excitement of the big city?

If there's one place in Mexico that should be singled out as a vegan foodie destination, it has to be Mexico City. Much has been written about the exploding vegan scene in the Mexican capital.

From a vegan bakery serving chocolate cookies and red velvet cake to a fully vegan taco stand offering plant-based versions of meaty fillings like al pastor, Mexico City really does have everything you could possibly want as a plant-based eater.

For more recommendations on the best vegan eats in town, check out this Mexico City vegan guide by my friend Sam at Indefinite Adventure.

Want to create easy Mexican dishes in your own kitchen? The resources listed below are full of delicious vegan and vegetarian Mexican recipes.

Vegan Mexican Food. A website created by the Food Empowerment Project that features plant-based Mexican recipes that have been contributed by food lovers from all over the world. 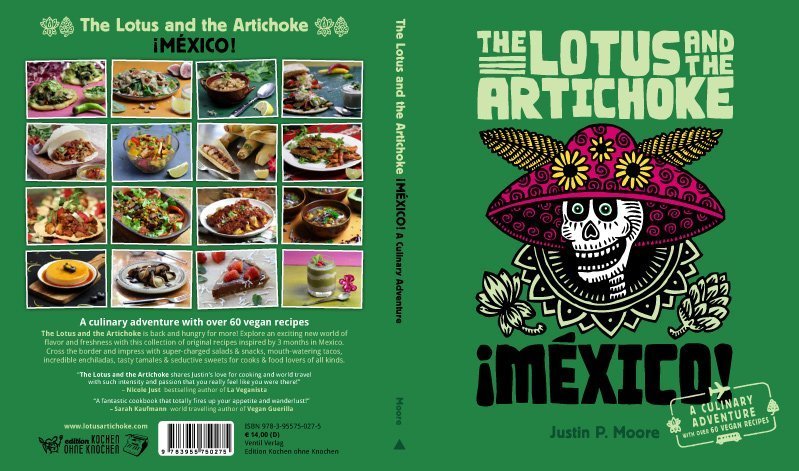 The Lotus and the Artichoke ¡Mexico!. A cookbook written and illustrated by Justin P. Moore, who combines stories of his own travels in Mexico with recipes that he learned from local cooks or concocted on his own from local ingredients while living in the Mexican seaside town of Lo de Marcos.

¡Salud! Vegan Mexican Cookbook: 150 Mouthwatering Recipes from Tamales to Churros. A new book by Eddie Garza, who combines innovative cooking techniques with traditional Mexican staples, creating recipes that are both delicious and healthy.

The Taco Cleanse: The Tortilla-Based Diet Proven to Change Your Life. A tongue-in-cheek parody of all the detoxes and cleanses on the market these days. The book contains 75 vegan taco recipes.

Viva Vegan!: 200 Authentic and Fabulous Recipes for Latin Food Lovers. A recipe book by Terry Hope Romero that covers every aspect of Latin cooking across the Americas, including a number of Mexican recipes.

Decolonize Your Diet: Plant-Based Mexican-American Recipes for Health and Healing. A lacto-ovo vegetarian cookbook by Luz Calvo and Catriona Rueda Esquibel, who encourage Mexicans to ditch the fast food and return to their own culture's food roots for both physical health and spiritual fulfillment. 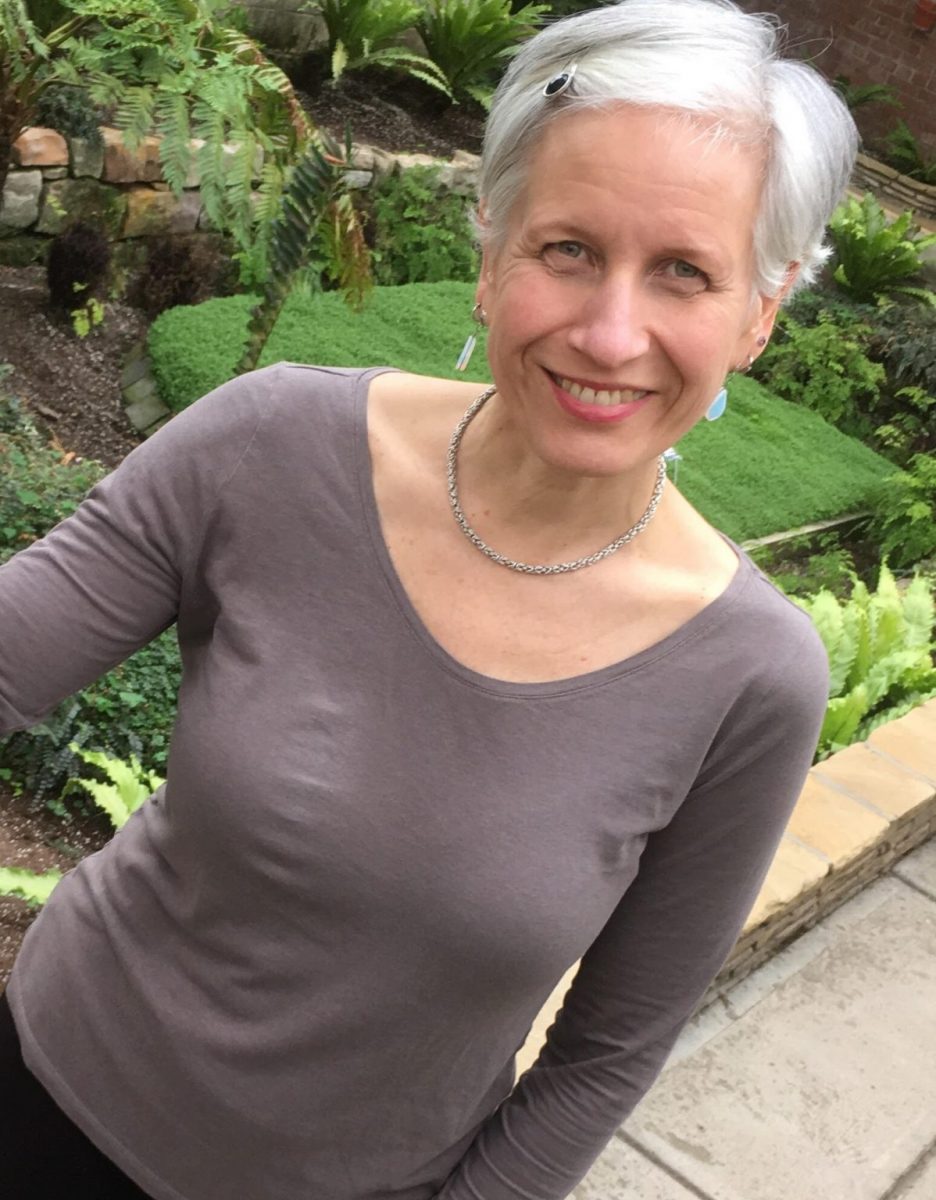 After founding a vegan food company in 2014, Jeanne Petrus-Rivera decided to take her life in a different direction. Combining her passions for travel, healing, and the vegan lifestyle, she’s setting off on new adventures while inspiring others to do the same. Follow her on Instagram at @geeneedoesearth. Website coming soon! 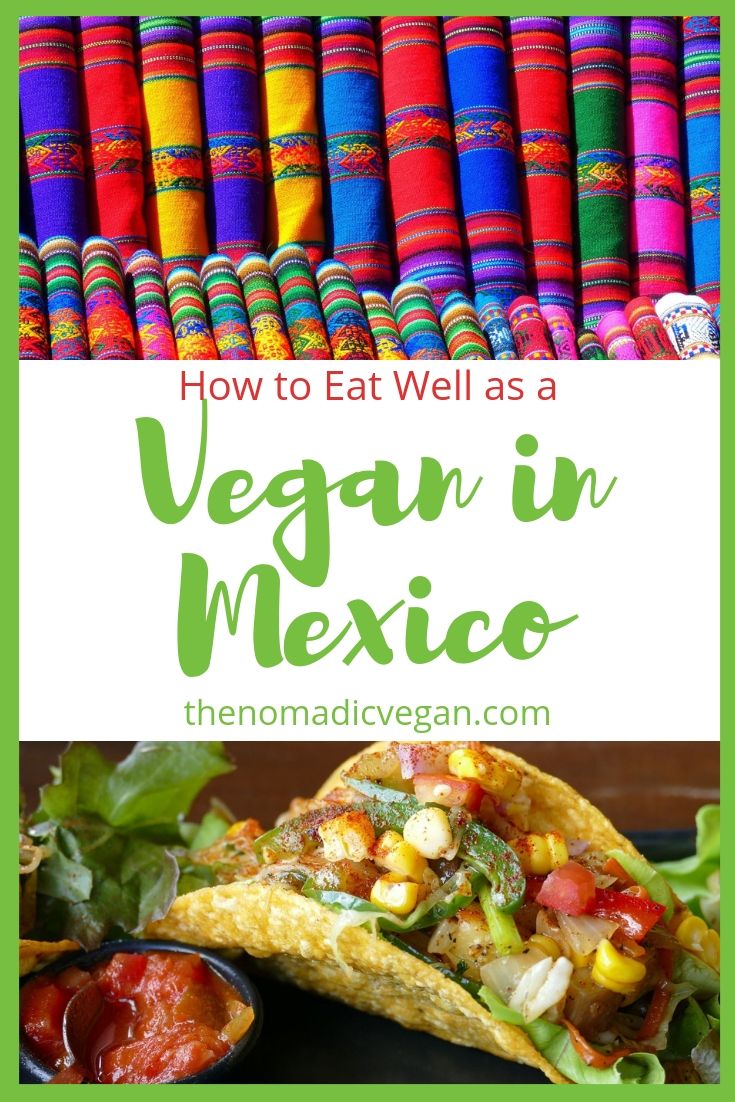