Home Travel Africa What to Eat in Morocco as a Vegan

What to Eat in Morocco as a Vegan 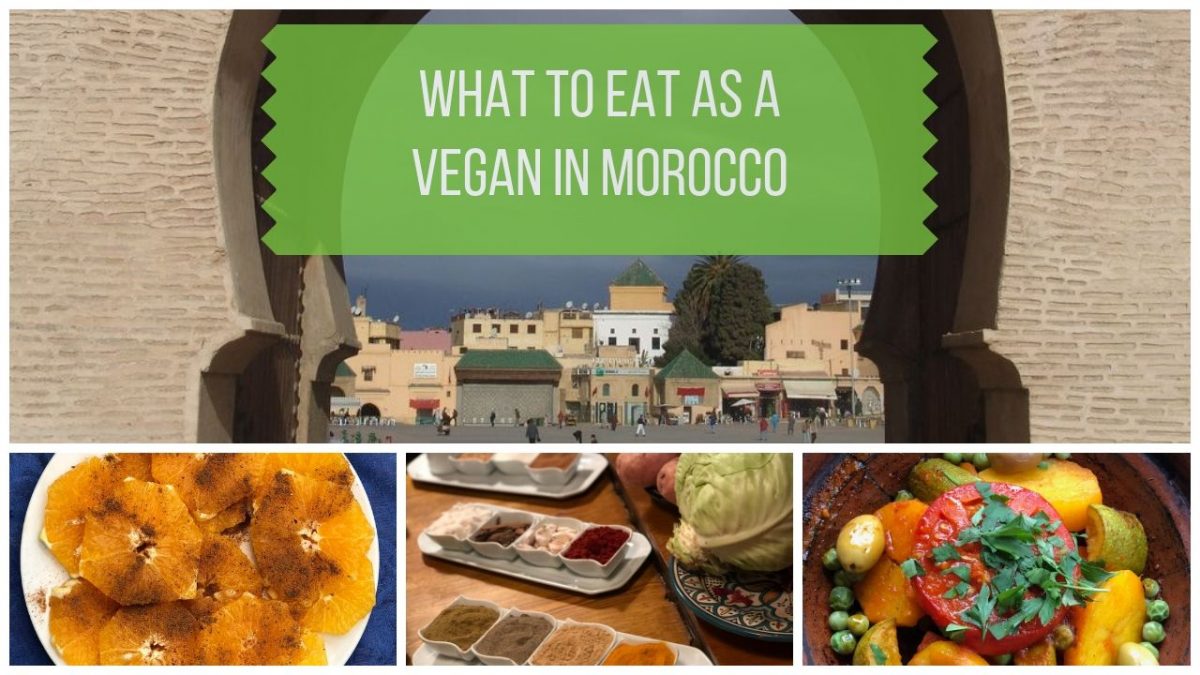 There's plenty to love about Morocco. Wandering the narrow alleyways of the imperial cities, sleeping underneath the stars on a desert tour, and hiking in the Atlas Mountains are all amazing experiences that make Morocco a top travel destination.

The city of Marrakech is just a quick, low-cost flight away from several cities in Western Europe, and this has made it a popular choice for Morocco travel. There are some great day trips you can take from Marrakech if you have the time.

Tours are available to the Ouzoud waterfalls and the Sahara desert, and Essaouira can easily be reached either independently or with a tour operator. But even if you only have a weekend, Marrakech itself is totally worth the trip.

But here's the big question: What is Moroccan food like for vegans? Is Morocco vegan-friendly??

When I first arrived in Morocco, I had expectations of lamb and couscous. As someone who eats a vegan and mostly gluten-free diet, needless to say, I wasn’t stoked. Then I learned about the Moroccan salads. Oh, the Moroccan salads! Let me explain. 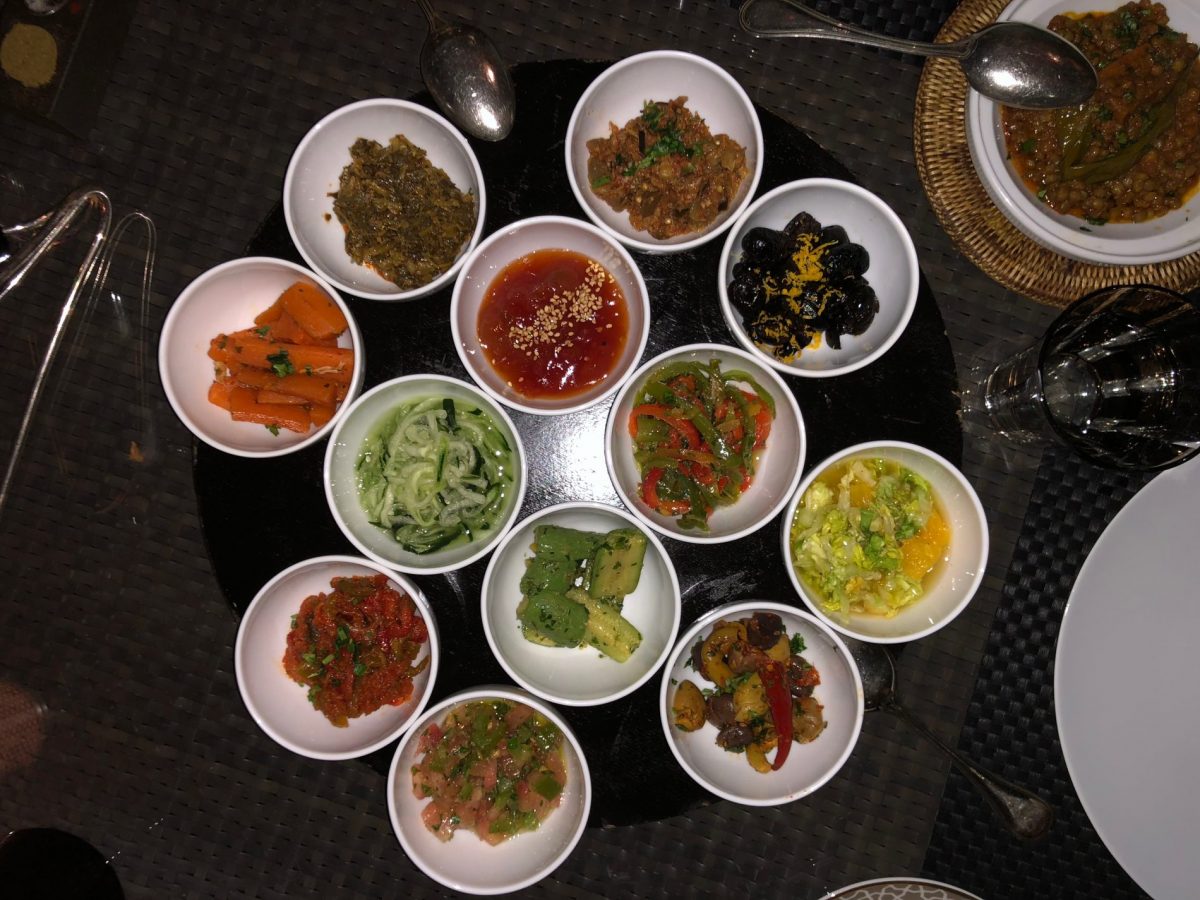 “Moroccan salads” is served as an appetizer, and it's plural. It is not a Moroccan salad. It is many Moroccan salads. When you order this dish, you will receive 4 to 12 different salads. They are small, 2 to 6 bites each. All different. All delicious.

Now for the really rad part. Every single one of them is VEGAN! I ordered this appetizer at least 10 times while spending two weeks in Morocco. There was never an ounce of animal product in them.

For fat, Moroccan cooks use argan oil, which is made from a nut. You know the blue-labeled “Moroccan Oil” used to smooth out hair? That's argan oil. Aside from being used cosmetically, it is the go-to salad dressing in Morocco.

The spices ranged radically. Most of the time, the flavors were so new that I wasn’t sure of the seasonings. I took a cooking class in Marrakech to learn more. Surprisingly, the spices were not so new; just in combinations and doses that were not familiar to me. 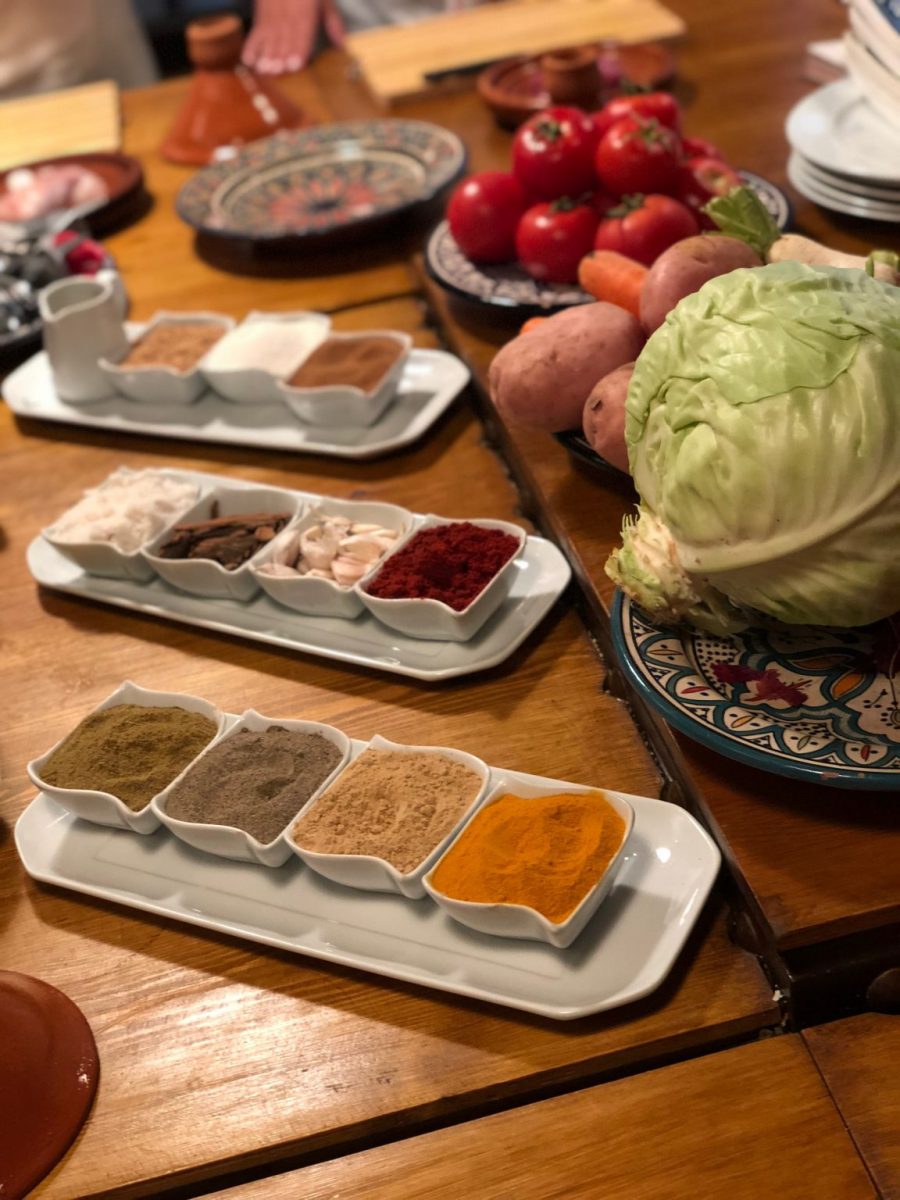 Moroccan dishes are flavored with unusal combinations of spices.

Salt, pepper, garlic, paprika, turmeric, cinnamon, cayenne, cumin, and saffron. Then, familiar herbs like parsley and cilantro (known to the rest of the world as coriander). All of these flavors harmonized in various ways in the Moroccan salads. It did not disappoint.

Now, enough of the salad salivating session. Let’s move on to my main squeeze. Tagine!!! 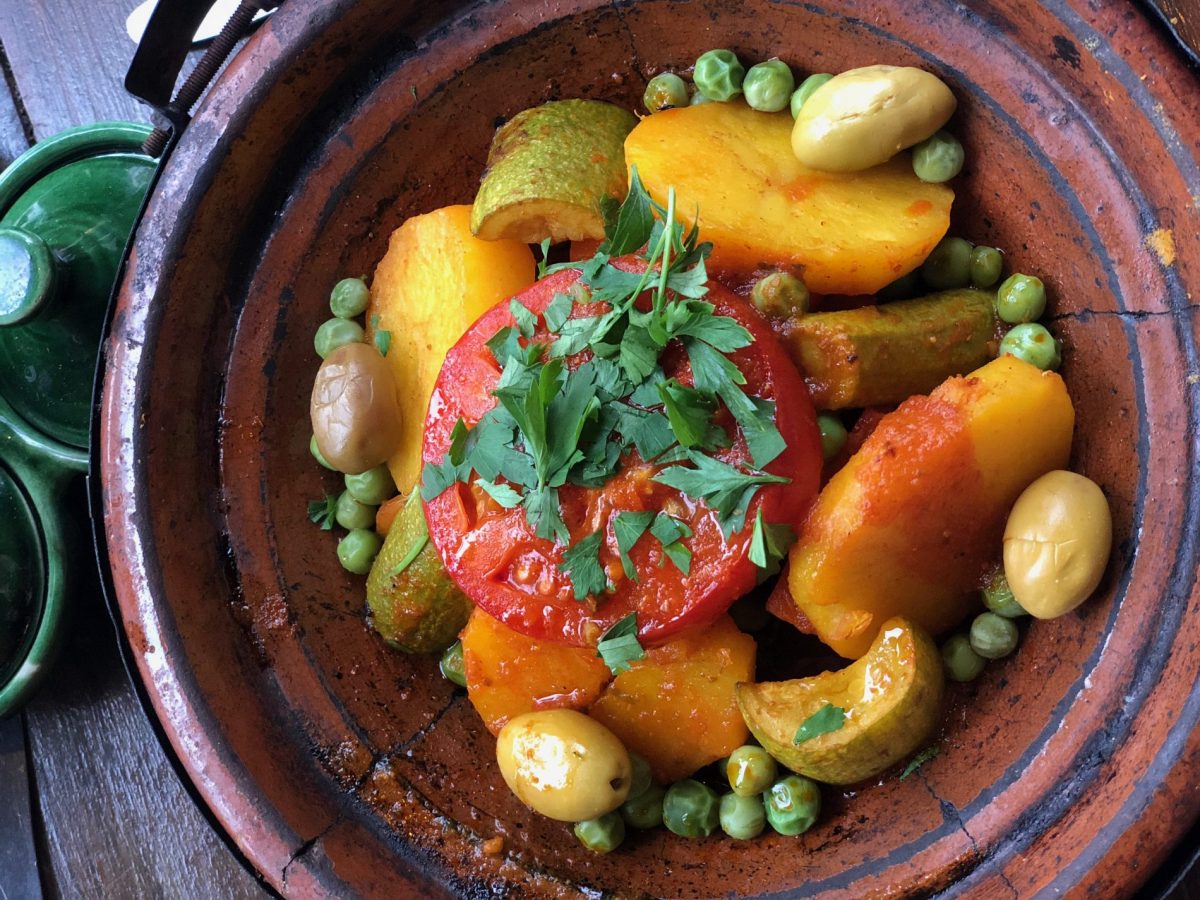 A tagine is a traditional Moroccan clay pot used for cooking. The bottom is a plate with a large lip, similar to a shallow bowl. On top of the plate is a triangular top. Food cooks on the stove, inside the plate covered by the triangular top. Covering accentuates the flavors because they are unable to escape; consequently, they meld together magnificently.

Tagine, the meal, is cooked inside the pot. This is another dish that I ordered at least a dozen times. Lamb and chicken are the two primary tagines, but there are others. I never sought out a vegetarian restaurant while in Morocco. I didn’t have to. Vegetarian tagine was everywhere. Since there was no honey, eggs or dairy in the dish (I checked), it was vegan tagine!

So, what goes inside this dish? Most of the time it was the same vegetables. Potatoes, carrots, turnips and zucchini topped with a slice of tomato and small slivers of preserved lemon.

To preserve lemons, they are cut in half, filled with salt and squeezed back together. Several lemons are pressed tightly into a jar that is covered for 30 days. The product is a sweeter version of the lemons you're familiar with.

FYI about tagine….it's usually made ahead of time, since it is served in the clay dish it’s made in and takes an hour to cook. On two occasions, the restaurant where I was eating was out of vegetarian tagine. Luckily, there is another vegan item on the menu — couscous. 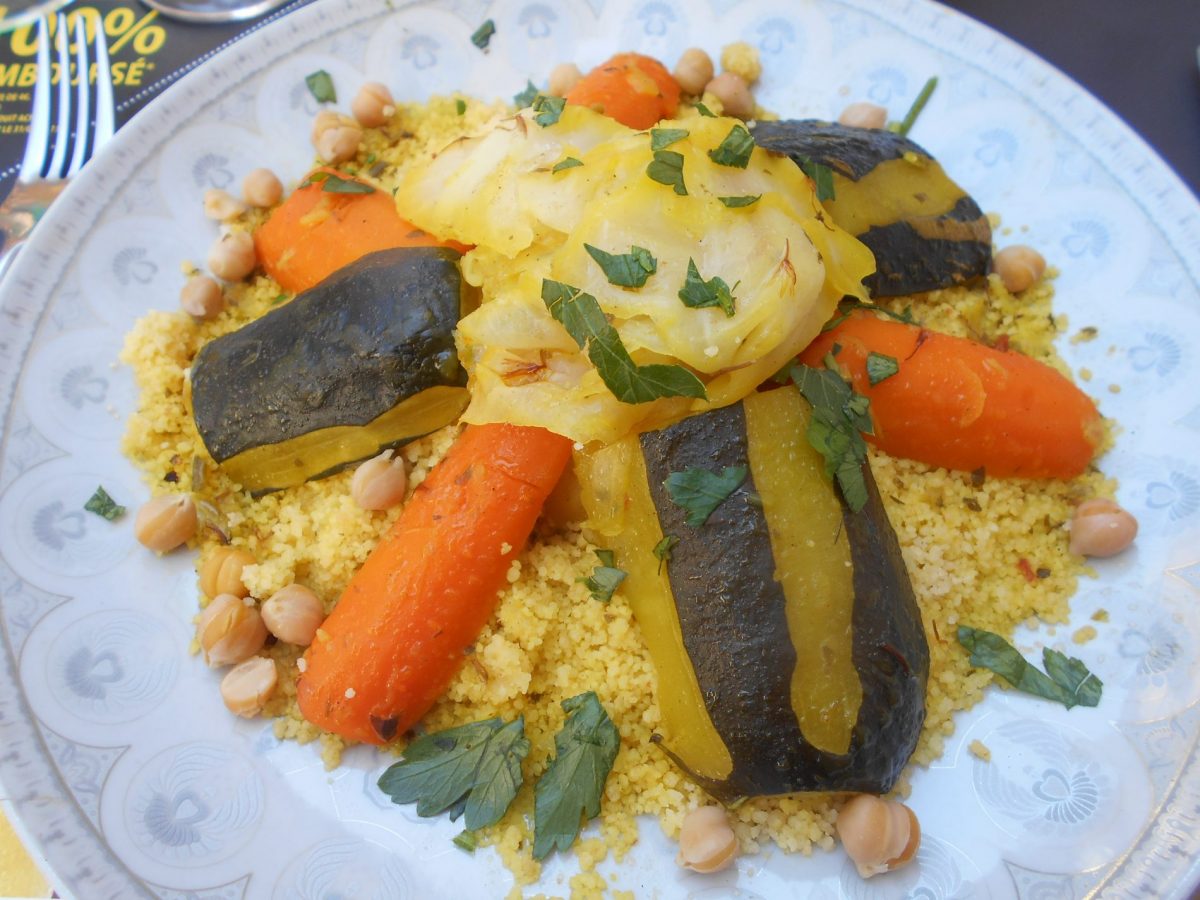 Morocco is covered in couscous. Like tagine, there are meat couscous dishes, but, almost always, there was also a vegan version. The veggies in the couscous were the same as the tagine.

If you are avoiding gluten, you do not have to limit yourself to the tagine. Since I limit gluten, on the occasions where the restaurant ran out of vegetable tagine, I asked for vegetables and rice. “Just like the vegetable couscous but with rice instead of couscous.” They got it.

Whether it’s rice or couscous, plain veggies with grains can be boring, but believe me, in Morocco it was anything but. Apricots and prunes are two fruits that are indigenous to North Africa. Vegetable dishes are often served with these two fruits, cooked down to become even sweeter. They resemble a primarily intact jam; still whole but soft and spreadable. 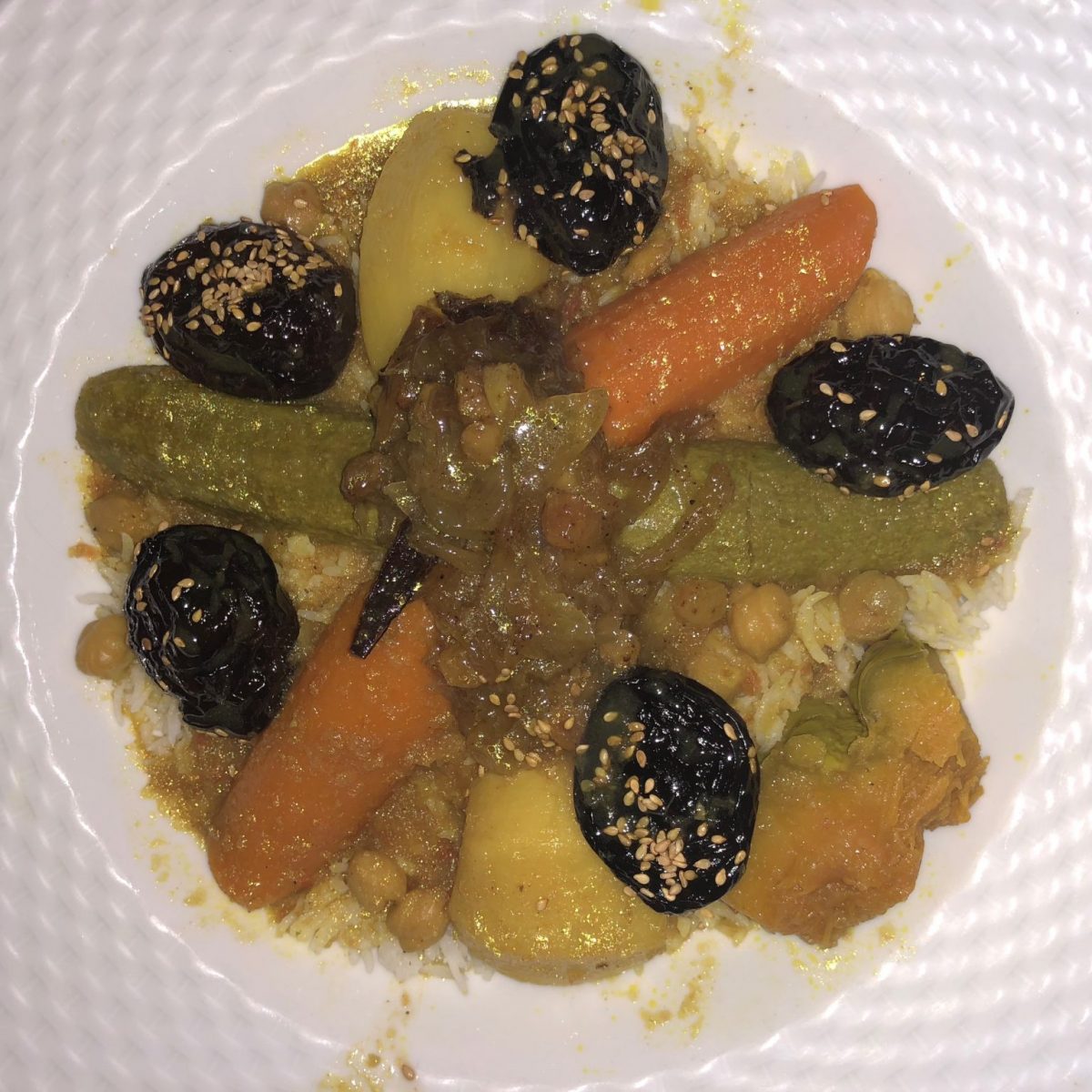 A gluten-free version of couscous. All the veggies, prunes and apricots, but with rice as a substitute grain.

If you don't have a problem with gluten, then you're in luck when it comes to the bread in Morocco. The typical flat, round loaves of bread known as "khobz" are served at every meal. This bread is generally not baked with any eggs or milk. You can ask the restaurant staff to be sure, but in most cases Moroccan bread will be vegan.

This traditional bread is commonly eaten with jam for breakfast. If you prefer savory options, try dipping it in olive oil or argan oil instead. And be sure to wash it all down with a hot cup of Moroccan mint tea.

The locals jokingly refer to mint tea as "Moroccan whisky" (since Morocco is a Muslim country, alcohol is not openly consumed here). It's made with fresh mint leaves and plenty of sugar.

Another common breakfast offering is pancakes, or "msemmen" as they are called in Morocco. This thin, fried bread is similar to Indian paratha and should be vegan, as it's typically made from just five ingredients: flour, yeast, sugar, salt and oil. Since msemmen are pan-fried, you might ask the restaurant staff to fry them in oil rather than butter, just to be sure. 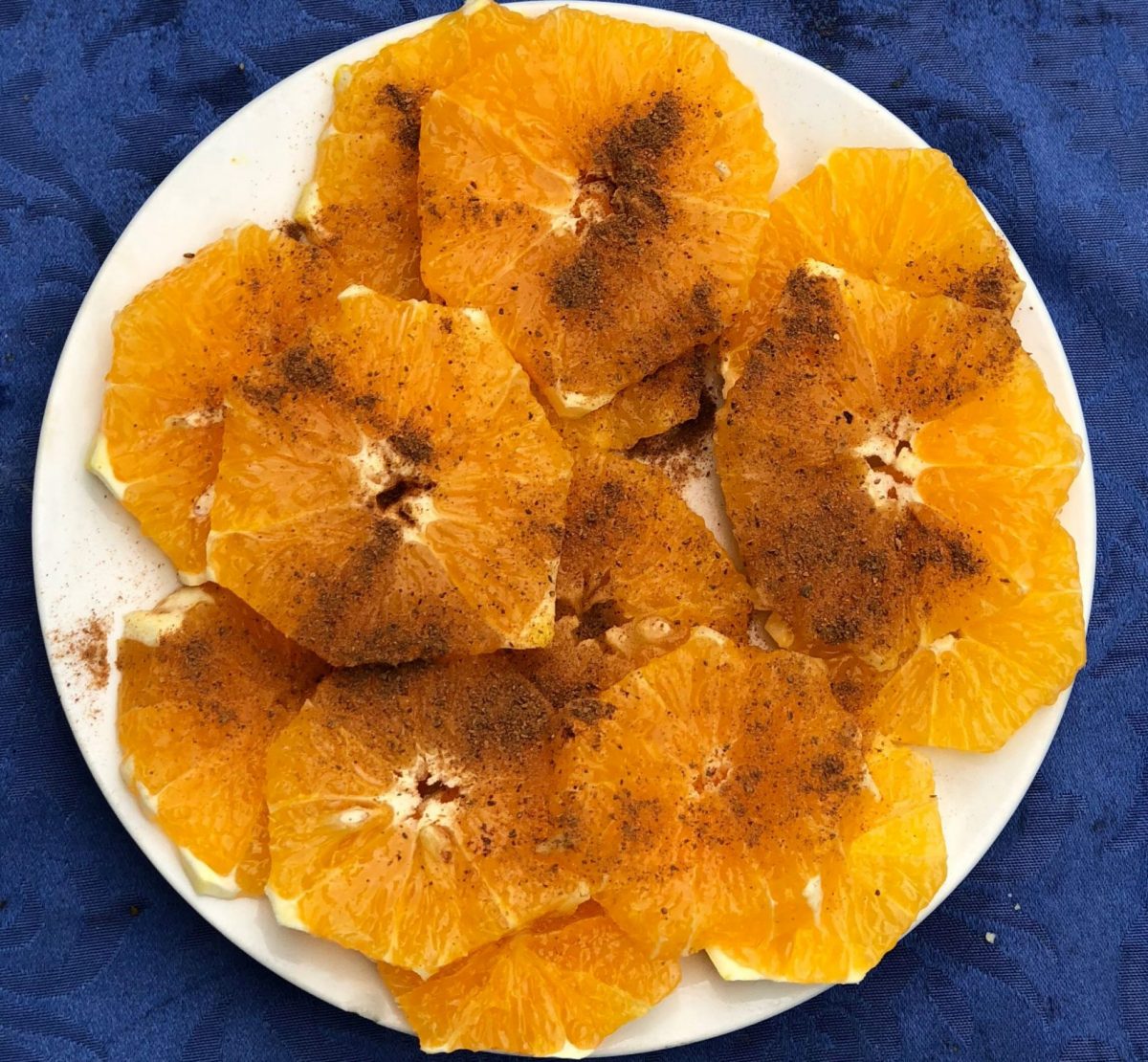 Oranges sprinkled with cinnamon is a popular dessert in Morocco

You will find fresh fruit sold at market stalls all throughout Morocco. It can also be found on restaurant menus as a healthy (and totally vegan!) dessert option. Sliced oranges sprinkled with cinnamon is a very common dessert in Morocco, and any restaurant will be able to serve you some fresh fruit on request.

Freshly squeezed fruit juices are also a common sight and are not to be missed. Orange juice is by far the most popular and is an inexpensive way to cool down and refresh yourself on a hot day.

If you happen to be in Morocco between November and January, you're in luck! This is pomegranate season, and you will find street vendors selling freshly squeezed pomegranate juice.

Another popular drink in Morocco is what's known as a panaché. This is essentially a smoothie, but it was popular in Morocco long before the smoothie trend caught on in the West. Panaché can be made with either cow's milk or orange juice as a base, so be sure to ask for the latter. An unusual local specialty worth trying is the avocado panaché.

Vegan and Vegetarian Restaurants in Morocco

Like I mentioned, I didn't feel the need to seek out any vegetarian restaurants while I was in Morocco. But if you do want to, there are a growing number of restaurants specializing in vegetarian and vegan cuisine.

The Happy Cow Morocco listings include vegetarian and even fully vegan restaurants in Casablanca, Essaouira, Imi-n-ifri and Marrakech.

One of the most well-known is Earth Cafe Marrakech, which is a Moroccan vegetarian restaurant that serves up a variety of vegetarian and vegan dishes in a central location just off the famous Djemma Al Fnaa square.

Earth Café is actually just one of four fully veg eateries in the city, which means you have plenty of options for eating vegan in Marrakech. Of course, if you are planning to explore more off-the-beaten-path destinations in Morocco, don't expect to find many fully veg eateries.

To be honest, even some of the major cities in Morocco do not yet have any veggie restaurants.

So if your Google search for " vegan restaurants Agadir " or " Fes vegetarian restaurants " comes up blank, don't worry! Just go to any restaurant and ask for one of the dishes described in this article, and you'll have a delicious vegan meal. Moroccan cuisine is one of many vegan-friendly cuisines in Africa and around the world, so there's no need to limit yourself to veg restaurants.

For more on vegan travel in Africa, check out these articles: 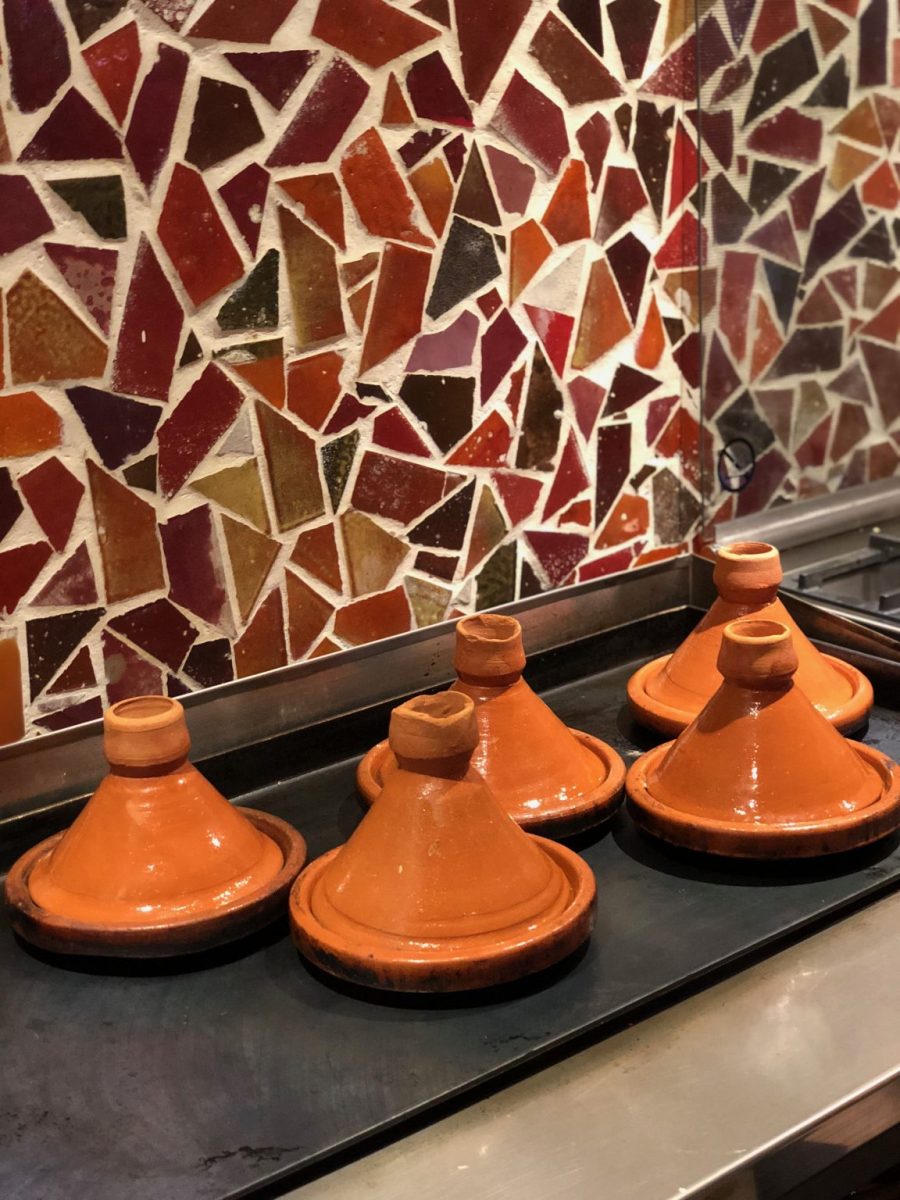 These are the tagine pots that all tagine dishes are cooked in.

I recommend staying at a riad, which is a traditional Moroccan home that has been converted into a guesthouse. The service at riads is more personalized than at hotels, and those riads that serve food will happily accommodate your needs. Plus, staying at a riad is a great cultural experience in itself.

It still amazes me how simple it can be to eat vegan around the world. Originally from Mississippi, I spent most of my life in the South. Mississippi, Louisiana, Texas and Georgia. All lands of meat-lovers.

In Texas it's beef, and in the Deep South, its seafood. Aside from the house salad and French fries, veganism at restaurants is nearly impossible there. Not like Morocco though. Not like Morocco. All the salads. All the tagine. All the couscous. All the time. Enjoy the newness and embrace the culture. 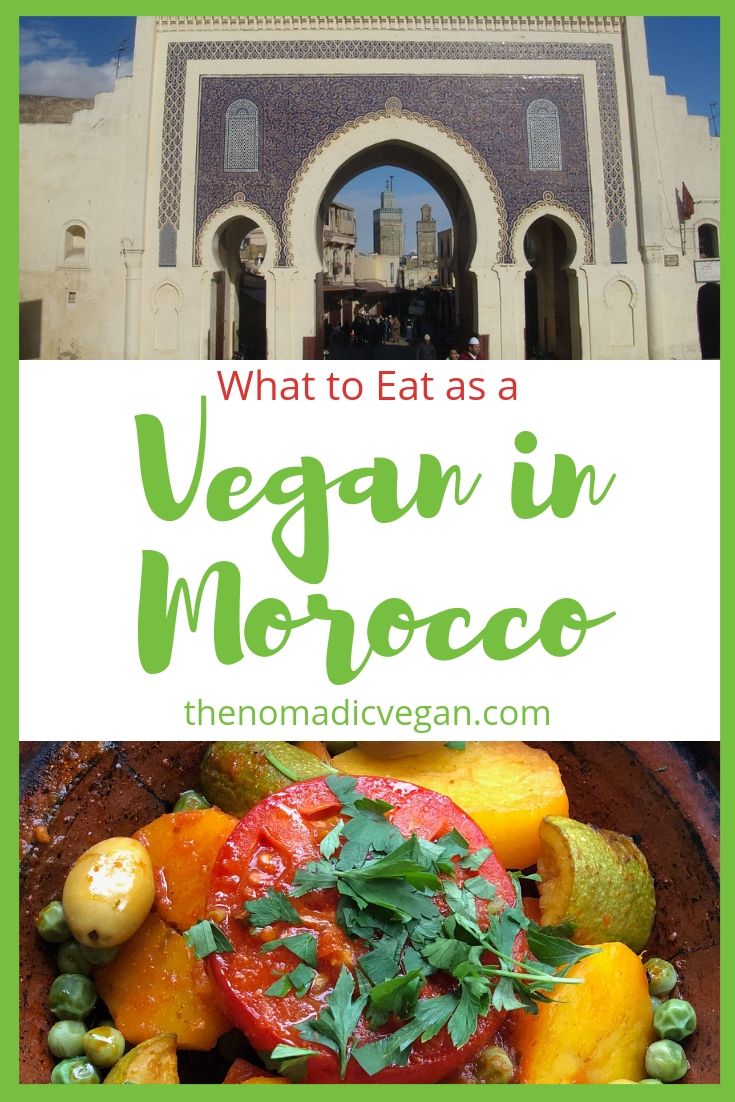 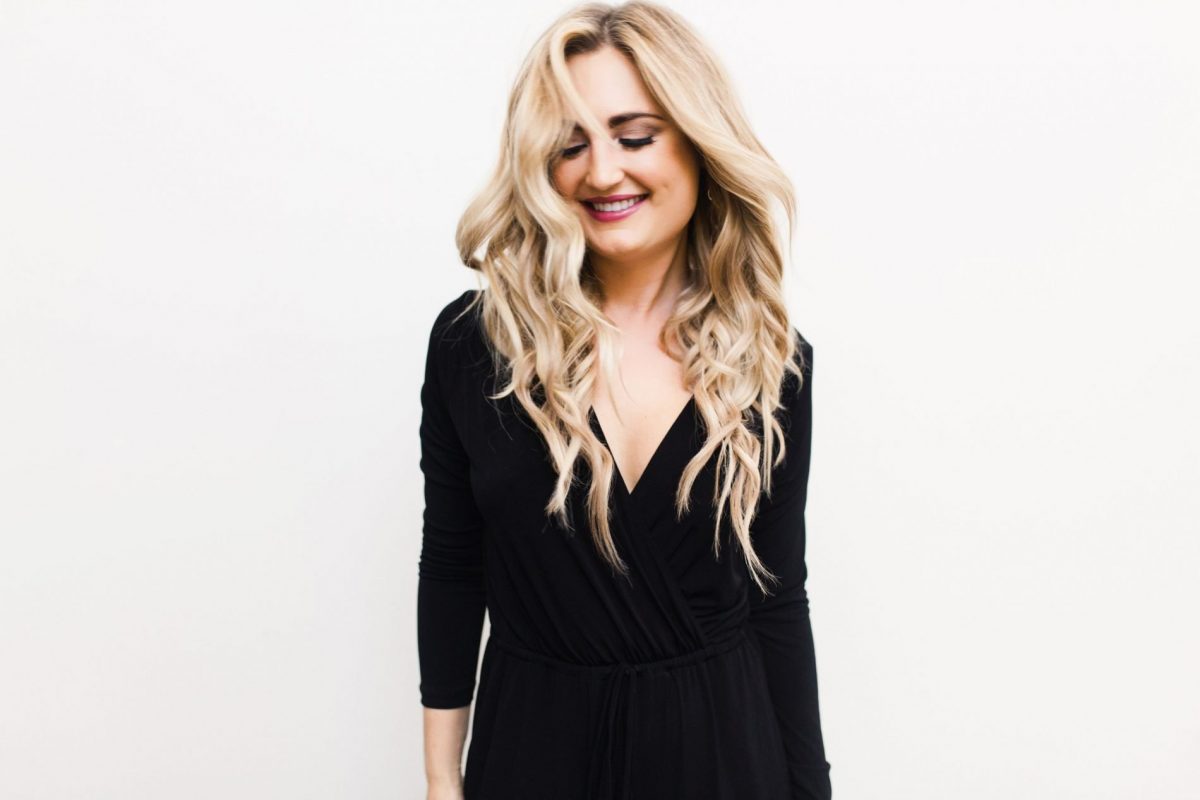 Carly is a certified holistic health coach with a Master’s degree in health communications and a B.A. in Journalism. She attended the Institute for Integrative Nutrition where she was trained on over 100 dietary theories by the world’s top nutrition experts.

Originally from South Mississippi, Carly now lives out of a suitcase, traveling full-time and experiencing all the vegan treasures of the world. She loves to practice yoga, cooks and help others navigate the journey to better health. Check out her website and follow her on Instagram and Facebook.