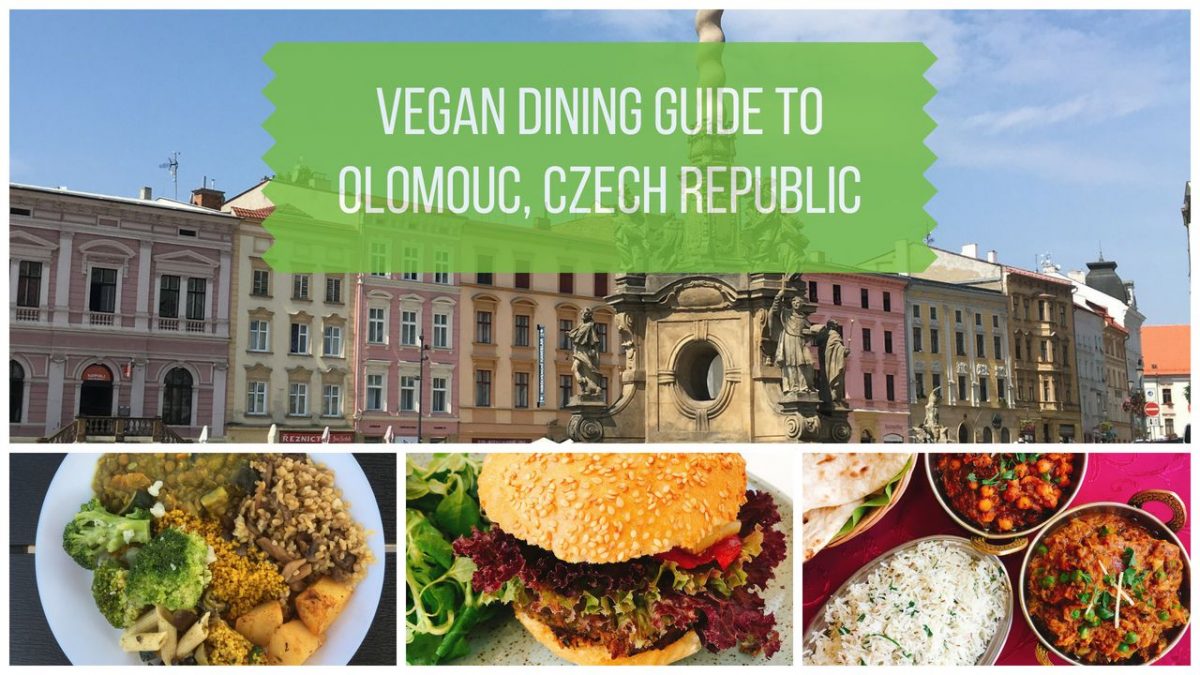 This vegan guide to the best Olomouc restaurants highlights the top vegan, vegetarian and veg-friendly eateries in Olomouc Czech Republic. There are quite a few choices in this small city!

If you’re wondering whether or not you should visit Olomouc, the answer is definitely yes. It’s one of the most beautiful places in Czech Republic, without the hordes of tourists that have taken over Prague.

Restaurants Open for Lunch and Dinner 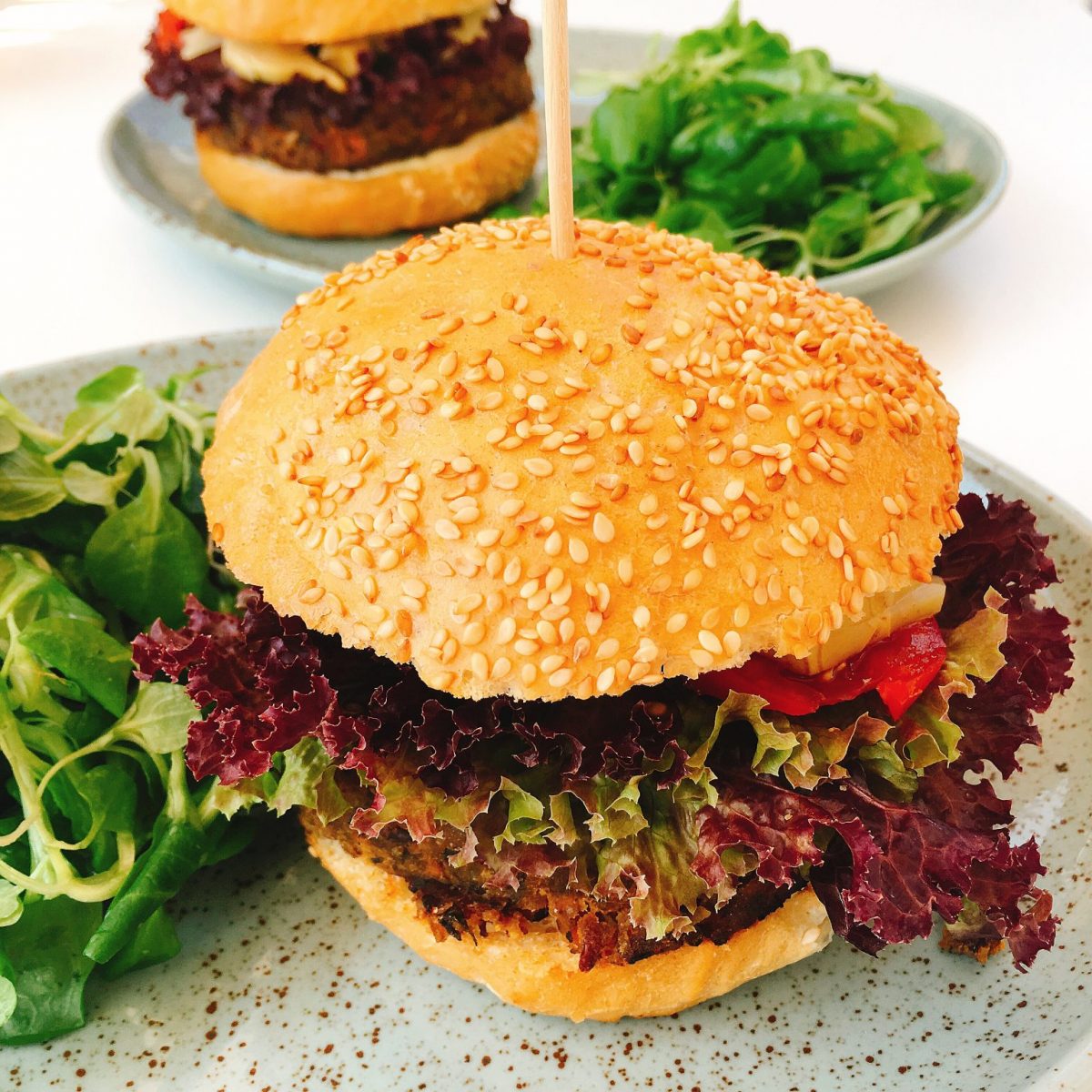 The Long Story Short Hostel Olomouc is a relatively new hostel housed in an old brick building with a long culinary history. The building was a bastion in one of the city’s old fortifications and used to function as the military bakery, where bread was baked for the soldiers.

The lunch and dinner menu at the Cooking Bar is small but vegan-friendly, as three of the seven menu items are vegan. I tried the summer rolls and the vegan burger, which were both delicious.

The lovely seating area out on the deck of this Olomouc hostel is very popular with locals in the evening. The hostel sometimes hosts themed events, too, such as a salsa night or swing night. 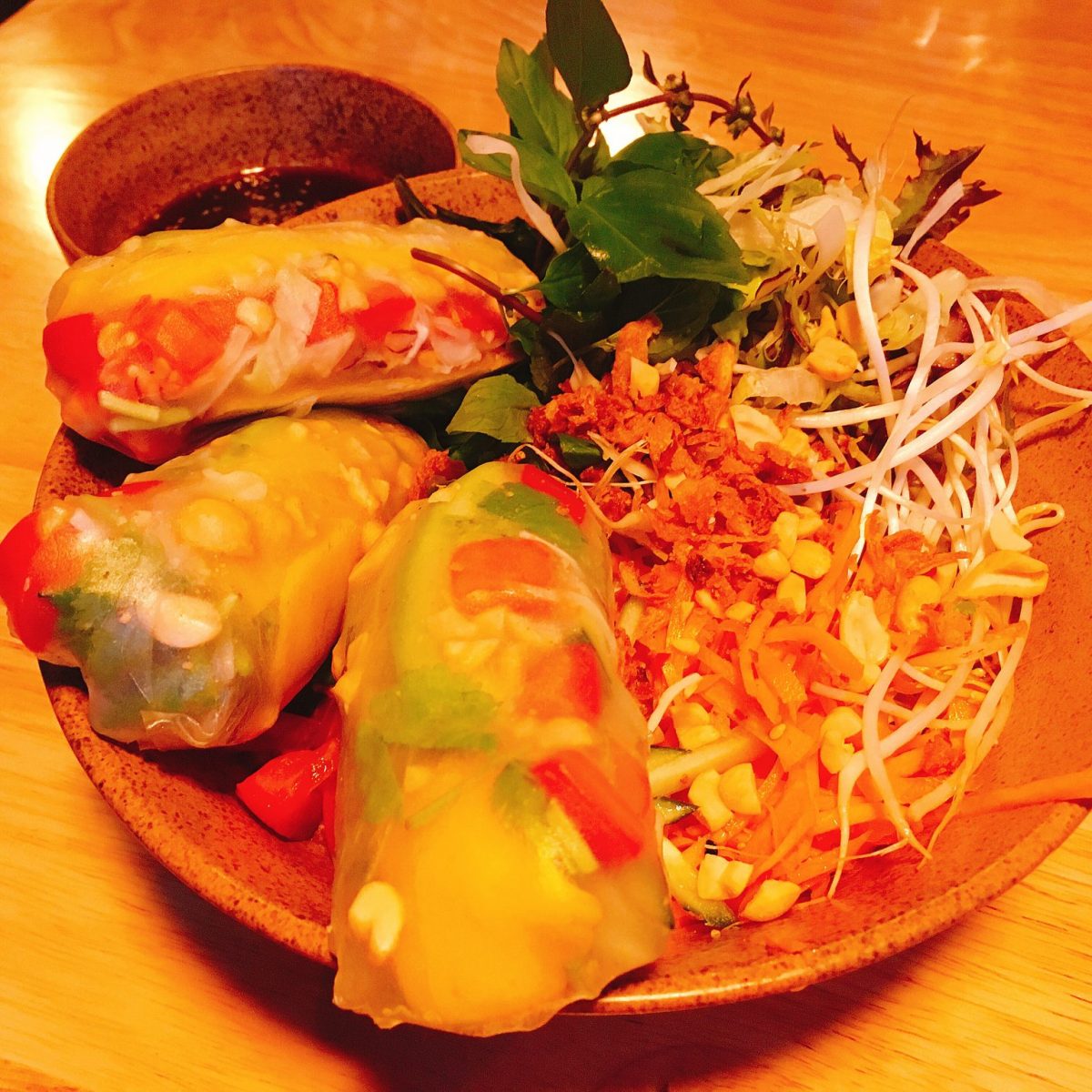 This restaurant serves authentic Vietnamese food in generous portions. The menu is in Czech only, but the staff are happy to translate and tell you which items can be made vegan.

On our server’s recommendation, I ordered the bun nem. These were fresh spring rolls filled with tofu, mango and avocado, served with a large bowl of noodles. It was delicious! The rolls normally include shrimp, so be sure to let the staff know you want the vegan version.

One menu item that’s already vegan by default is the rau dau phu, which is a flavorful dish of tofu and vegetables served with rice. 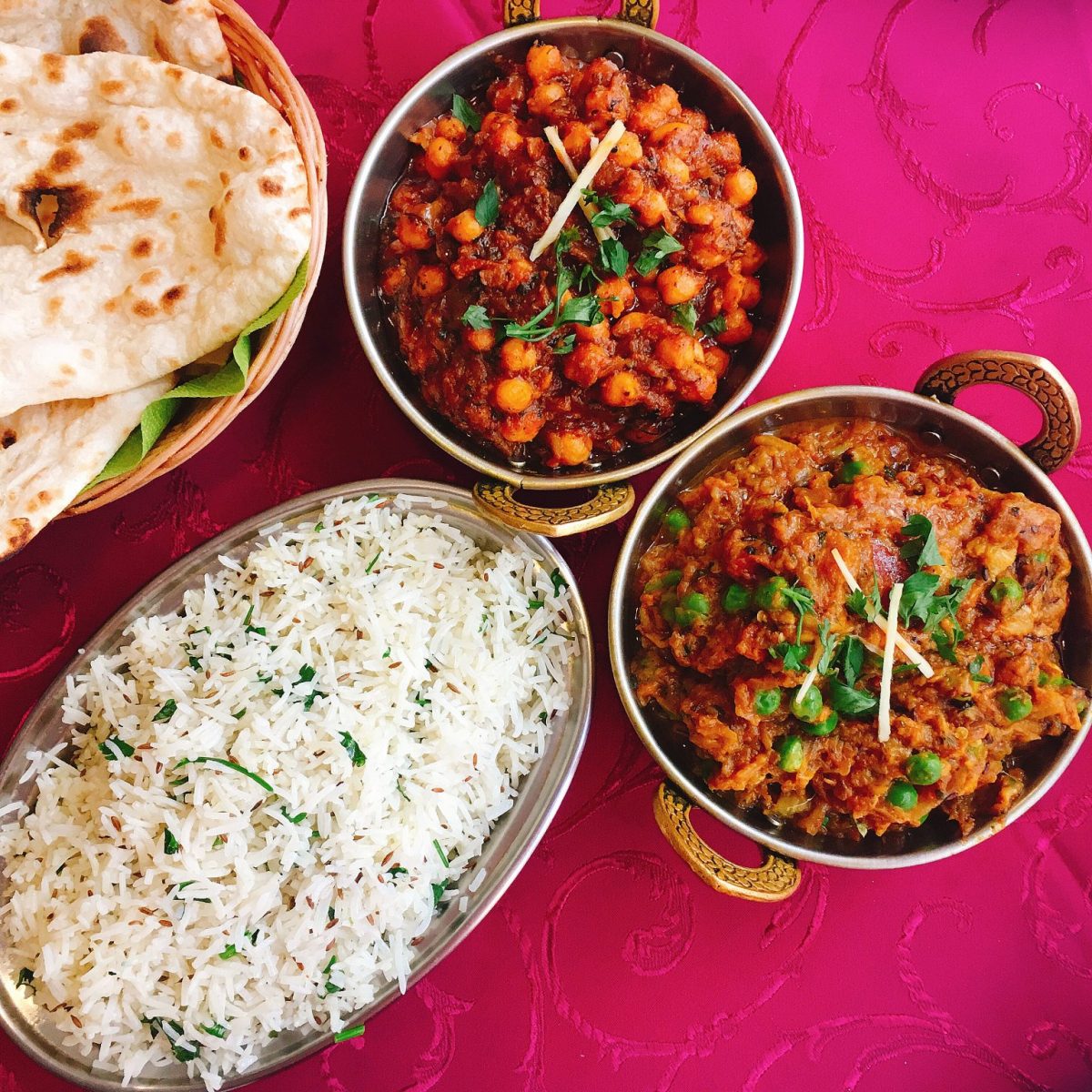 The menu here includes a vegetarian section of typical Indian favorites, four of which are vegan: aloo gobhi, channa masala, baigan bartha and dal tadka. The mixed vegetable curry can also be made vegan on request.

I was thrilled to find that the plain naan bread is vegan here too, which is pretty unusual (most Indian restaurants add yogurt to their naan). The naan is huge; one piece is enough to share between two people.

Dairy products are the one thing that can be tricky to avoid in Indian restaurants, but here in Olomouc it’s easy. Just look for the items without the number “7” next to them.

You will see this same numbering system used by many restaurants throughout the Czech Republic and neighboring Slovakia, so it’s really useful to know what it means.

The numbers next to each dish indicate the allergens they contain, so this is a quick way to tell whether a dish contains milk, eggs, fish, crustaceans or mollusks – all of which are classified as allergens by the European Union.

So as long as there’s no meat or honey either, the dish is vegan! This makes things much simpler than when dining out as a vegan in India, where meat and fish items are clearly marked but dairy typically is not.

Taste of India also offers a buffet at lunch time, so if you're looking for an all you can eat Olomouc dining option then this could be a good choice.

Just down the street from Taste of India, this is another Indian restaurant that has a reputation of being vegan-friendly. Reviewers on HappyCow have reported that the staff are willing to replace cow’s milk with coconut milk in some dishes.

But I heard from locals that Taste of India had better food, so I went there instead and was very happy with it. Like Taste of India, Aroma also offers an all you can eat buffet for lunch.

Restaurants Open for Lunch Only

There are several vegetarian restaurants in Olomouc, and even a couple that are fully vegan and raw. The catch is, almost all of them are open only for lunch, not for dinner, so plan your schedule accordingly if you want to eat there.

The only vegetarian restaurant in Olomouc that’s open for dinner is Vegg Go, but it’s inside a shopping mall food court, so not exactly atmospheric. 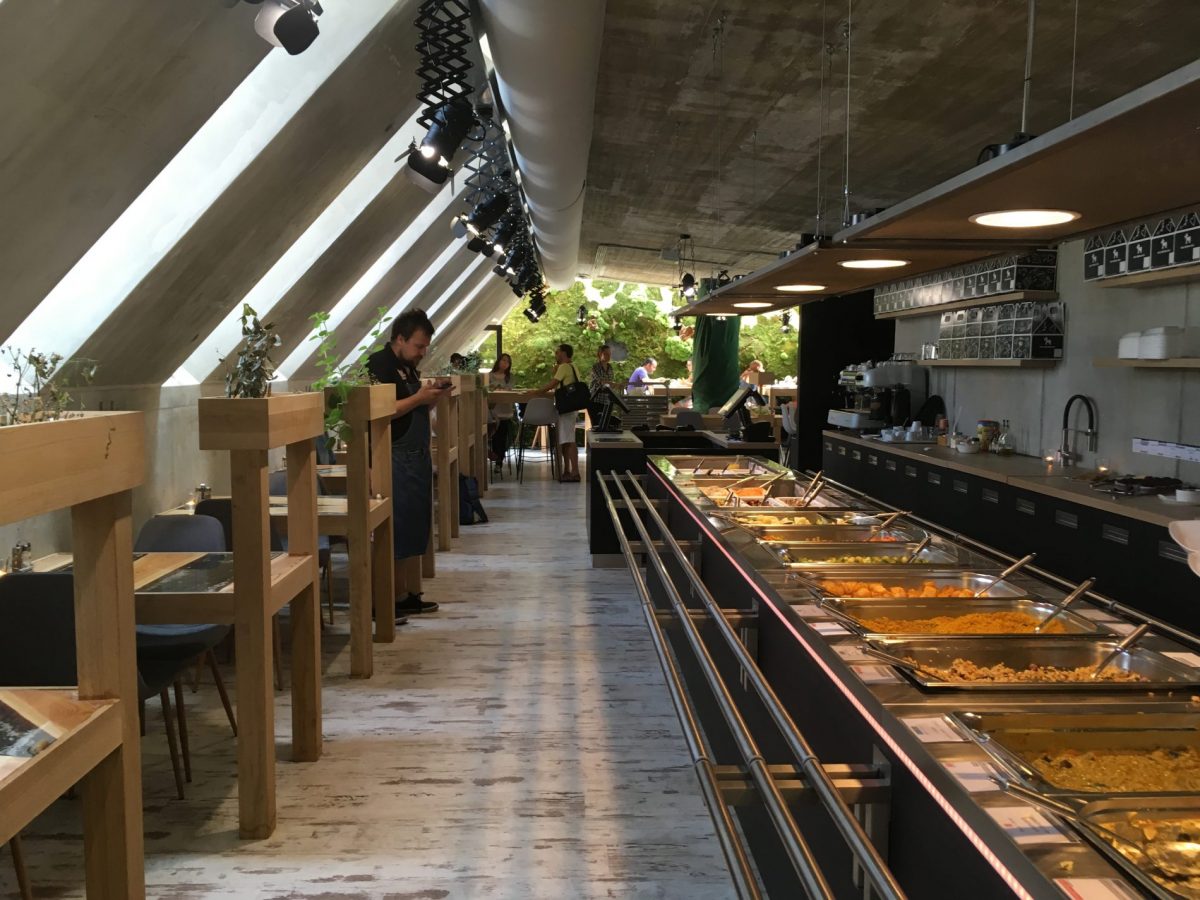 This restaurant was recommended by locals as the standout of the vegetarian lunch buffets in Olomouc, and it did not disappoint. All vegan dishes are marked, so you just choose the ones you want and then weigh your plate at the cash register. A full plate should come to about 110 CZK (4.40 euros), which is quite reasonable.

Like the Cooking Bar at the Long Story Short Hostel, Koza also has an atmospheric location inside a bastion of the old fort that once guarded the city. The building is known as the “water casemate” because it was built in a moat filled with water.

The restaurant can be hard to find, because it’s at the level above the other restaurants in the same building. Head up the stairs at the end of the street to find it.

There’s a nice seating area both inside and outside on the terrace, and the buffet includes a good variety of different dishes. I was happy to finally have the chance to try kuba here – a traditional Czech dish of mushrooms and barley that I had heard a lot about. 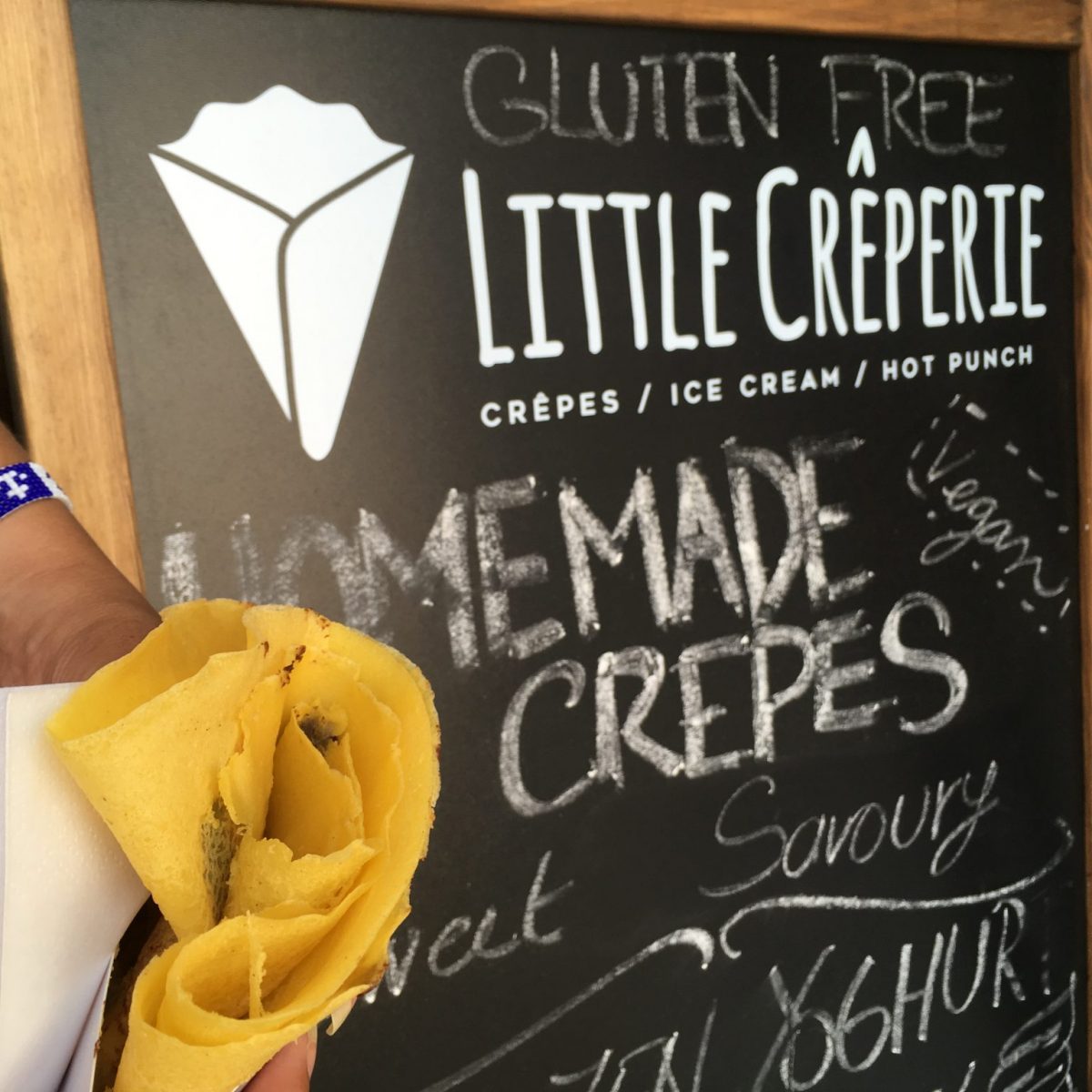 This crêpe and ice cream stand offers vegan crêpes for takeaway, and you can watch them being made while you wait. Since the savory fillings are not vegan, you’ll want to stick to the sweet crêpes filled with dark chocolate and/or fresh fruit.

To be perfectly honest, I wasn’t that impressed with the crêpe I had here. It was a far cry from the crêpes I've enjoyed in Paris.

The woman who served me seemed to have a hard time making it, as the batter kept sticking to the iron.

Once she finally got it off the iron, it also kept sticking to the cardboard cone it was served in, making it a pretty messy snack. It definitely wasn’t the best vegan crêpe I’ve ever had, but I appreciated the effort to offer a vegan option nonetheless. 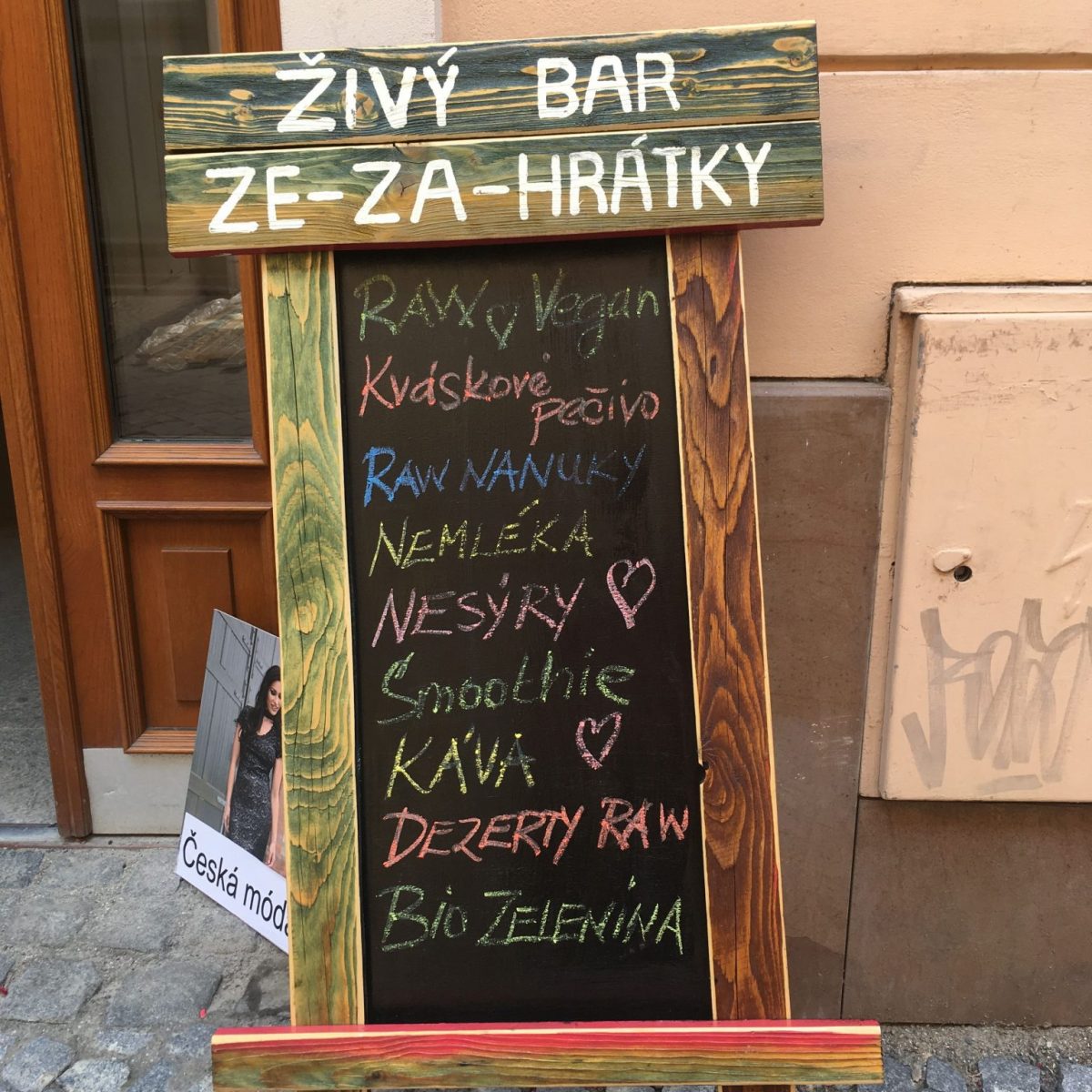 Živý - a raw vegan café that's open only for lunch

Since most of the vegetarian and vegan restaurants in Olomouc are closed for dinner, I wasn’t able to try as many of them as I would have liked. The places listed below were recommended to me by locals. If you try them, let me know!

This is a small, vegetarian bistro with a changing menu that always includes some vegan options. The focus is on light, healthy fare.

I stopped in briefly at this veg-friendly bistro, which has a pleasant upstairs seating area. I arrived around 6pm hoping to catch an early dinner before they closed at 7pm, but the cook had already left. Outside of lunch hours, they just have cakes and snacks.

This vegetarian bistro is very close to the train and bus stations, so it’s convenient if you’re arriving in or leaving Olomouc around lunch time. The daily menu always includes a vegan option. 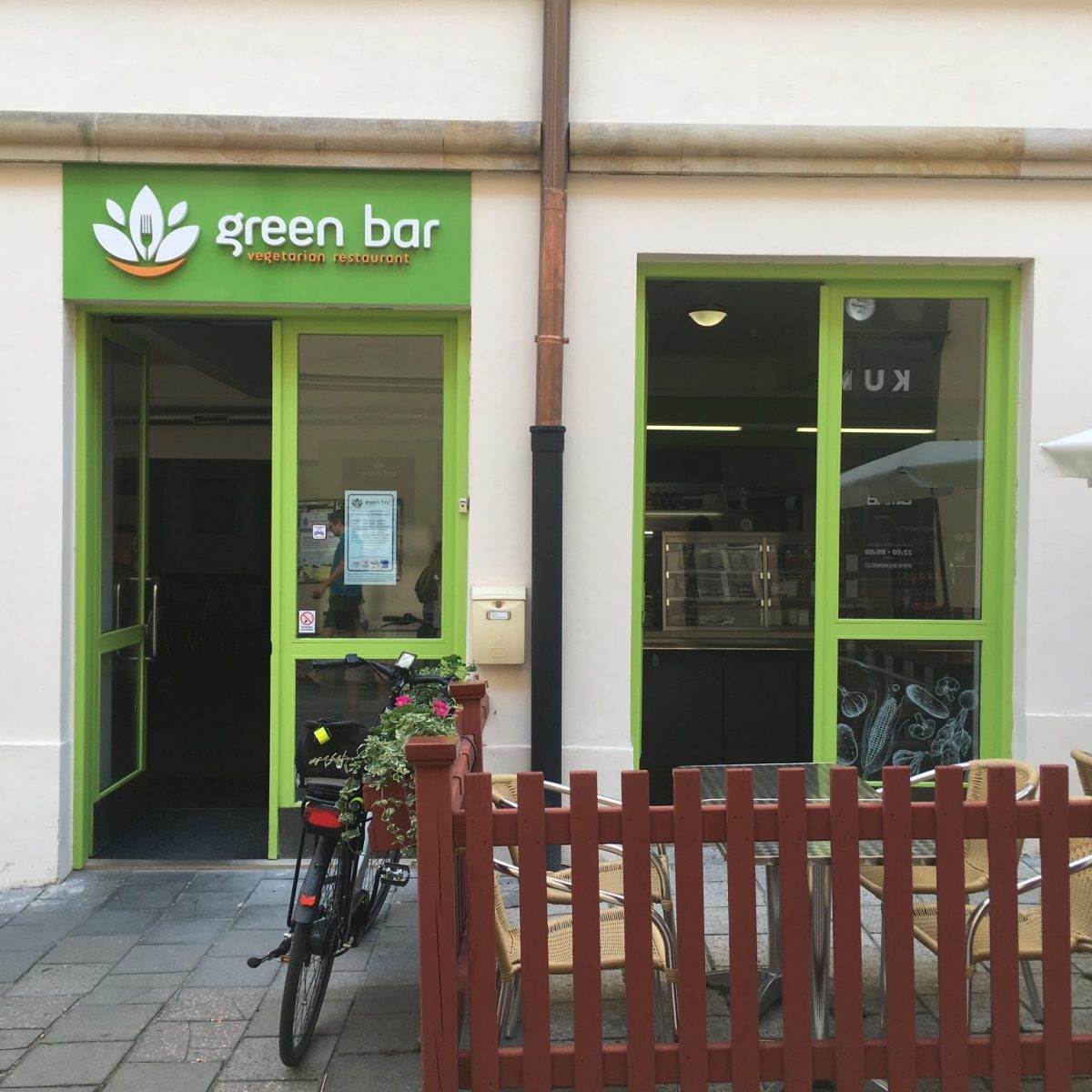 Green Bar is conveniently located in the city center

Like Koza Zustala Cela, this is another pay-by-weight vegetarian buffet and is right in the city center. I was told by locals that it’s pretty good, but not as good as Koza. 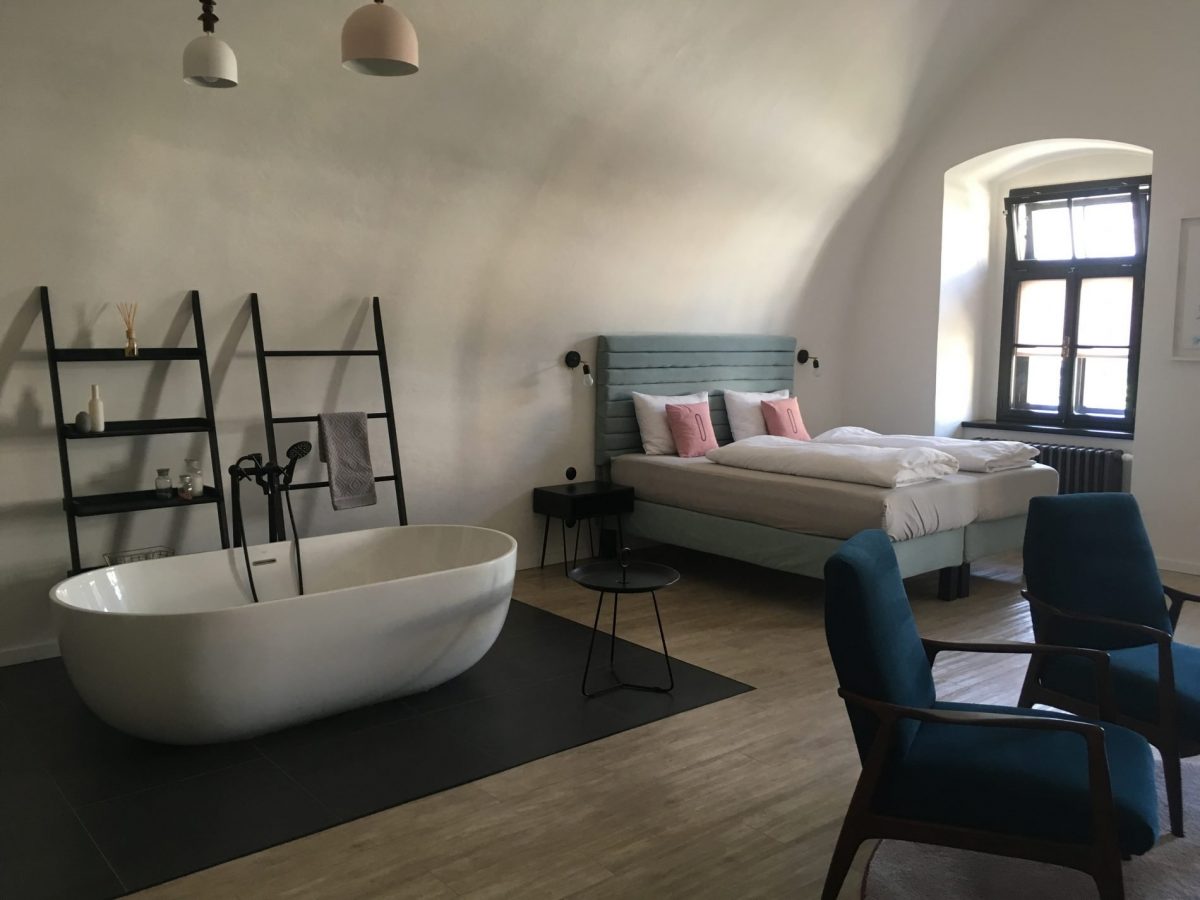 The Big One - not your typical hostel room!

Long Story Short Hostel & Café was my base during my stay in Olomouc, and it is quite possibly the nicest hostel I’ve ever stayed in. Even if you don’t normally stay in hostels, you will love this place. You can forget the image of grungy backpacker haunts that the word “hostel” often evokes. That’s not what this is.

The interior design is sleek and minimalist, with a Scandinavian feel. They offer something for every budget, from dorm beds to the deluxe private suite known as The Big One, which is worth the splurge!

Yep, you get your own personal bathtub when you stay in The Big One.

I don’t have a bathtub at home, so relaxing in the deep tub with a complimentary bath bomb was a huge treat for me. But if that’s not your thing, there’s also a shower in the en suite bathroom.

The breakfast spread includes homemade hummus, fresh fruits and vegetables, bread and jam, and granola with plant-based milks. Let them know you’re vegan, and they will also make you “vegan eggs” (tofu scramble) to put on your toast. How’s that for a vegan-friendly hostel? 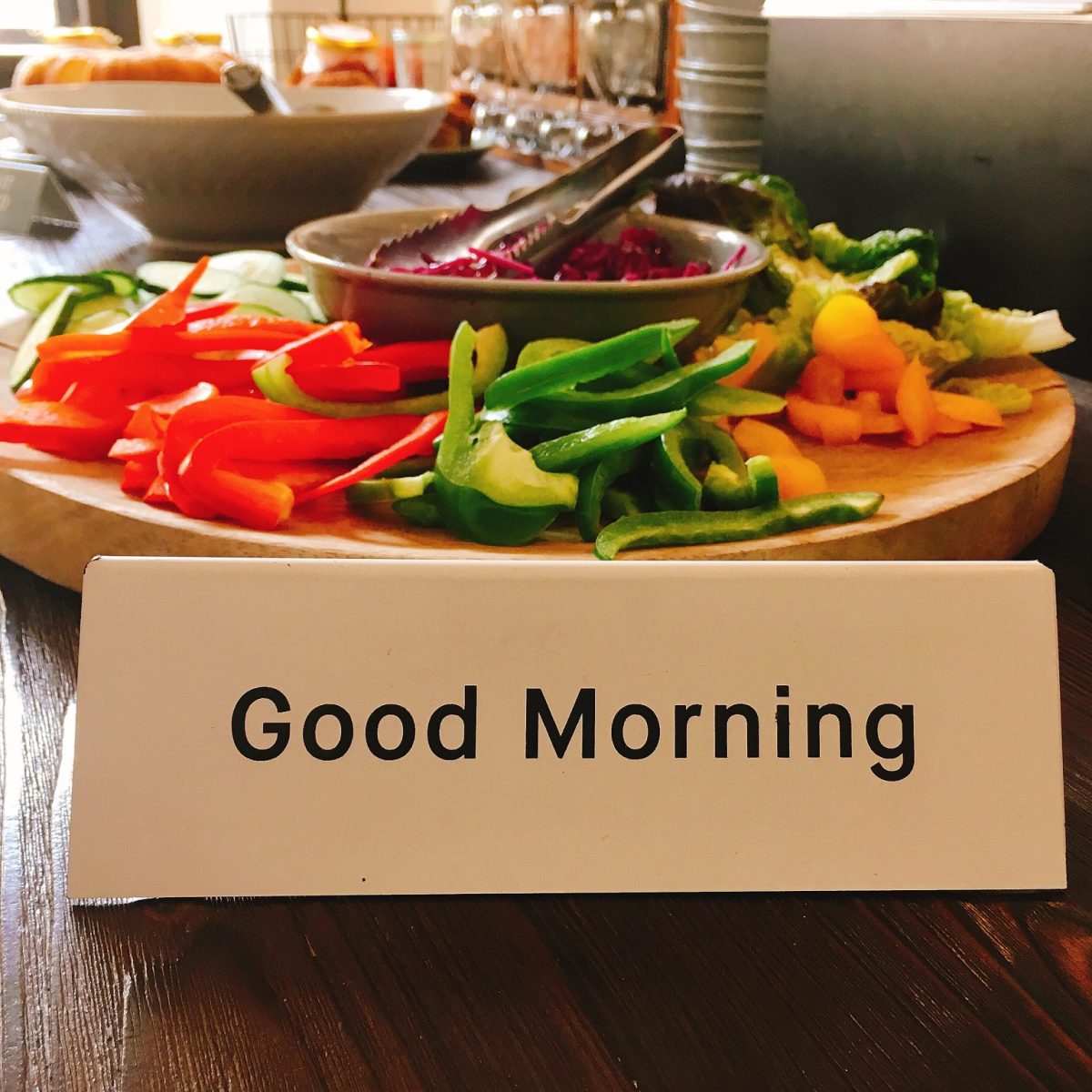 What a way to start the morning! 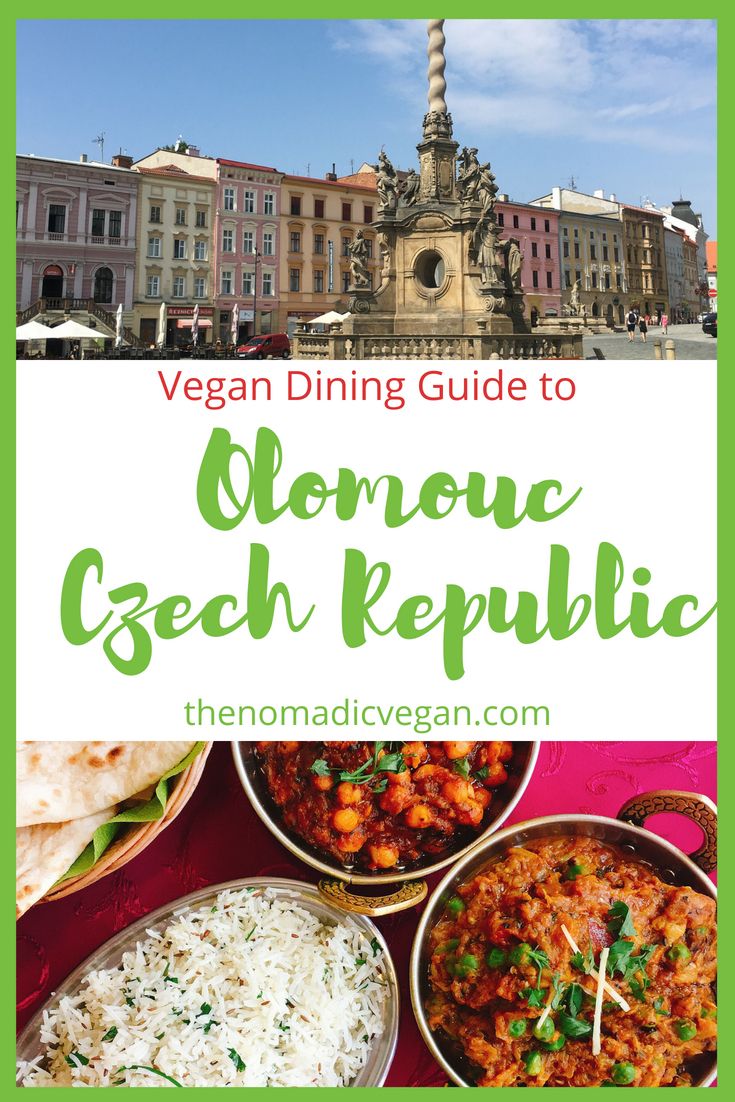 Many thanks to Long Story Short Hostel & Café for hosting me. As always, I only post honest reviews on this blog, and all opinions are my own.