Home Travel Asia How to Eat Vegan in Iran

How to Eat Vegan in Iran 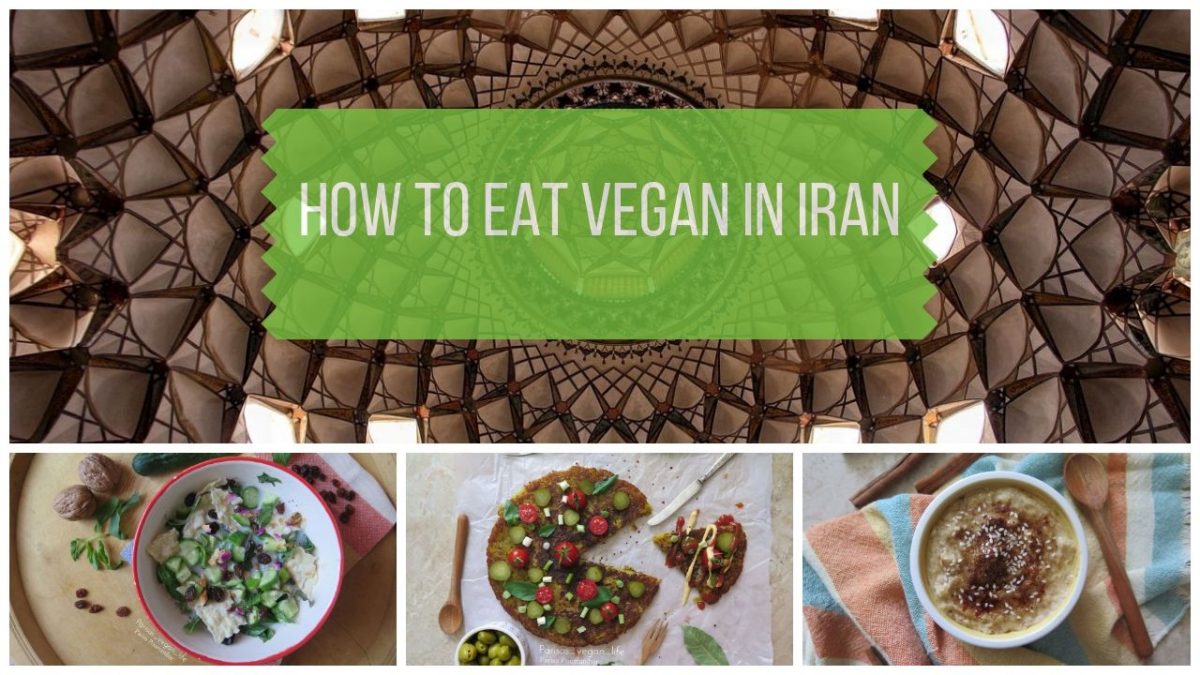 Vegan Persian Food: How to Eat Vegan in Iran

While today many people worldwide know about Iran and its culture, art, philosophy, and architecture, few know about Persian cuisine, much less vegan Persian food. This Middle Eastern cuisine is full of unique, tasty dishes. It’s rich in flavor and incomparable to any other type of cuisine.

Thanks in part to its strategic location along the ancient Silk Road, Iran gained access to ingredients from every corner of the old world. Its diverse climate, ranging from lush, humid forests in the north to arid desert lands in the center, also contributes to the wide variety of agricultural produce. 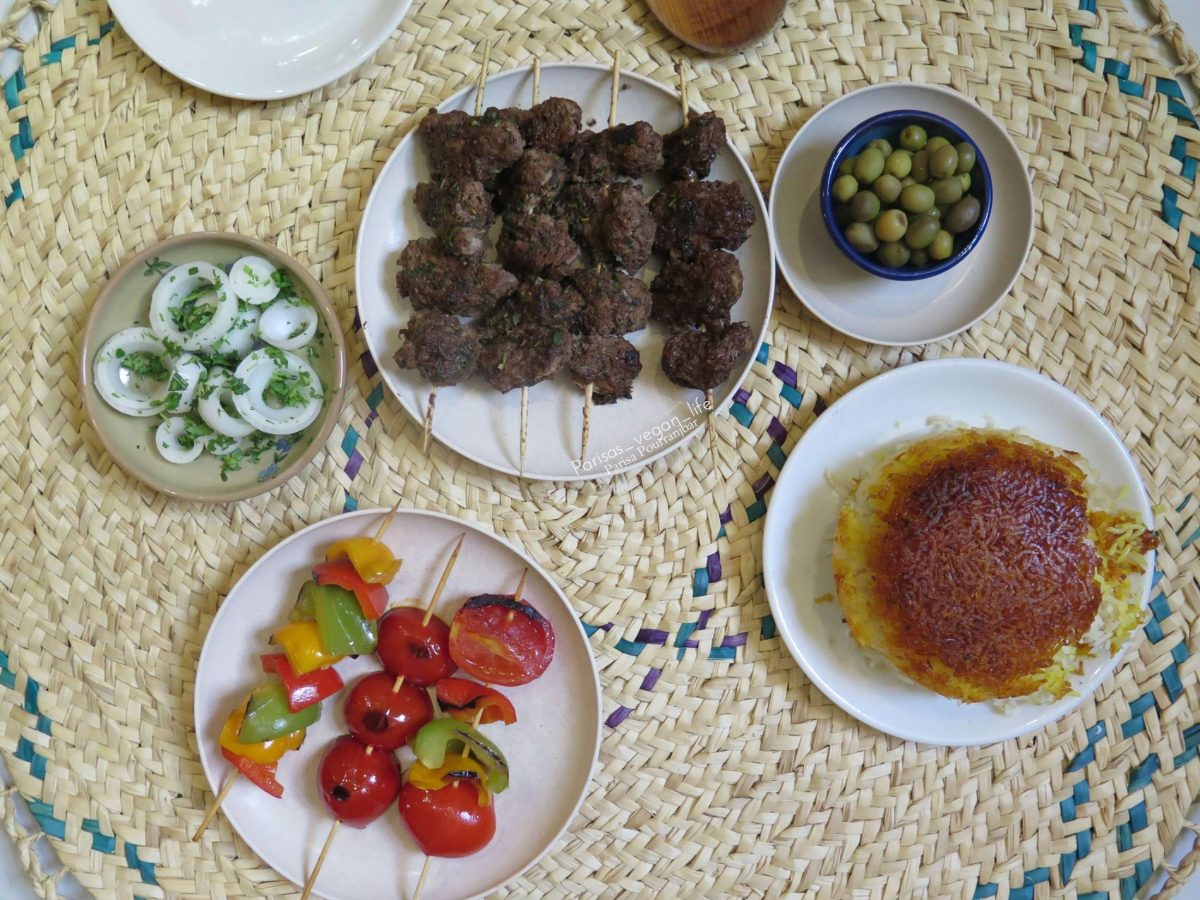 People who have heard about Persian cuisine immediately associate it with kebabs. This is a shame, because, not only do kebabs constitute only a tiny fraction of Persian cuisine, they are also something that Iranians very rarely make at home.

There are two reasons for this misunderstanding. Although the cultural integration that resulted from several invasions of Iran enriched Persian cuisine, it also brought kebabs, mainly from Turkish culture.

Since kebabs were considered a luxurious dish fit for kings and the wealthy, Iranians nowadays serve them to guests and in ceremonies and picnics as a must-have to show respect.

Since modern-day tourists are guests in Iran, Iranian hosts welcome them with this dish, thereby perpetuating this idea. Moreover, most restaurants only serve different types of kebabs with rice.

Those that do serve a few other dishes see them as low-budget options and usually serve a low-quality version of them.

Restaurant owners justify this odd tradition by saying that, if people want every day Persian food, they don’t go to restaurants, because they can simply make it at home. The same goes for fast food restaurants or cafés, where mostly Western favorites are served. 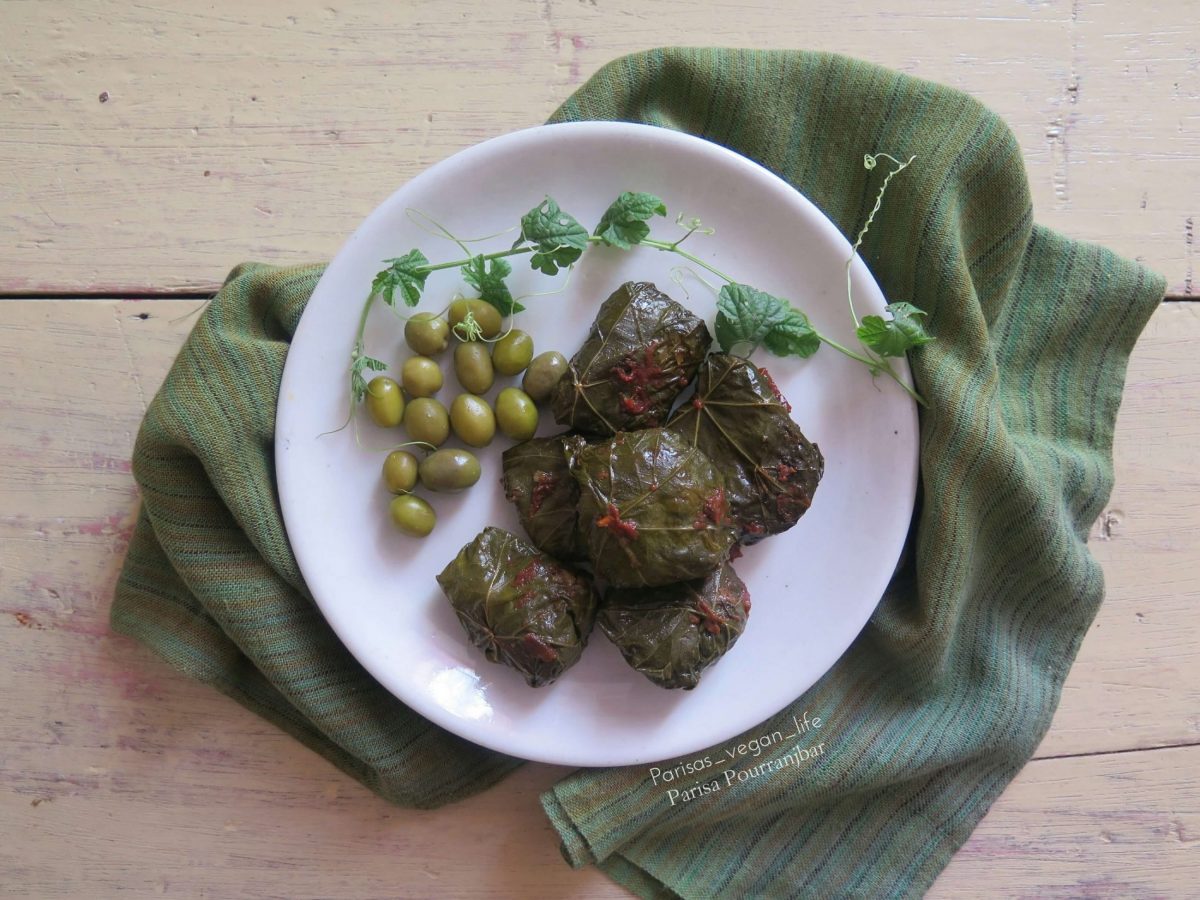 Vegetarianism has a long history in Iran and ancient Persia. In short, Persian prophets like Zoroaster, Mazdak and Mani, as well as many other famous figures throughout history, were vegetarian or vegan and promoted this lifestyle in their spiritual teachings or epic poems.

The impact of these cultural movements, alongside limited access to meat, resulted in a wide diversity of vegan dishes in Persian cuisine. Today, however, the influence of the media and Western nutritional misinformation about protein has spread worldwide.

Like others around the globe, most Iranians think of meat as a must-have ingredient for survival. The good news is that the global movement of veganism has also reached Iran in the past decade.

Although vegans and vegetarians are a small minority in this country, they are ever increasing in number. Also on the rise are vegan activists and NGOs that are freely promoting the vegan lifestyle, mainly via social networks. 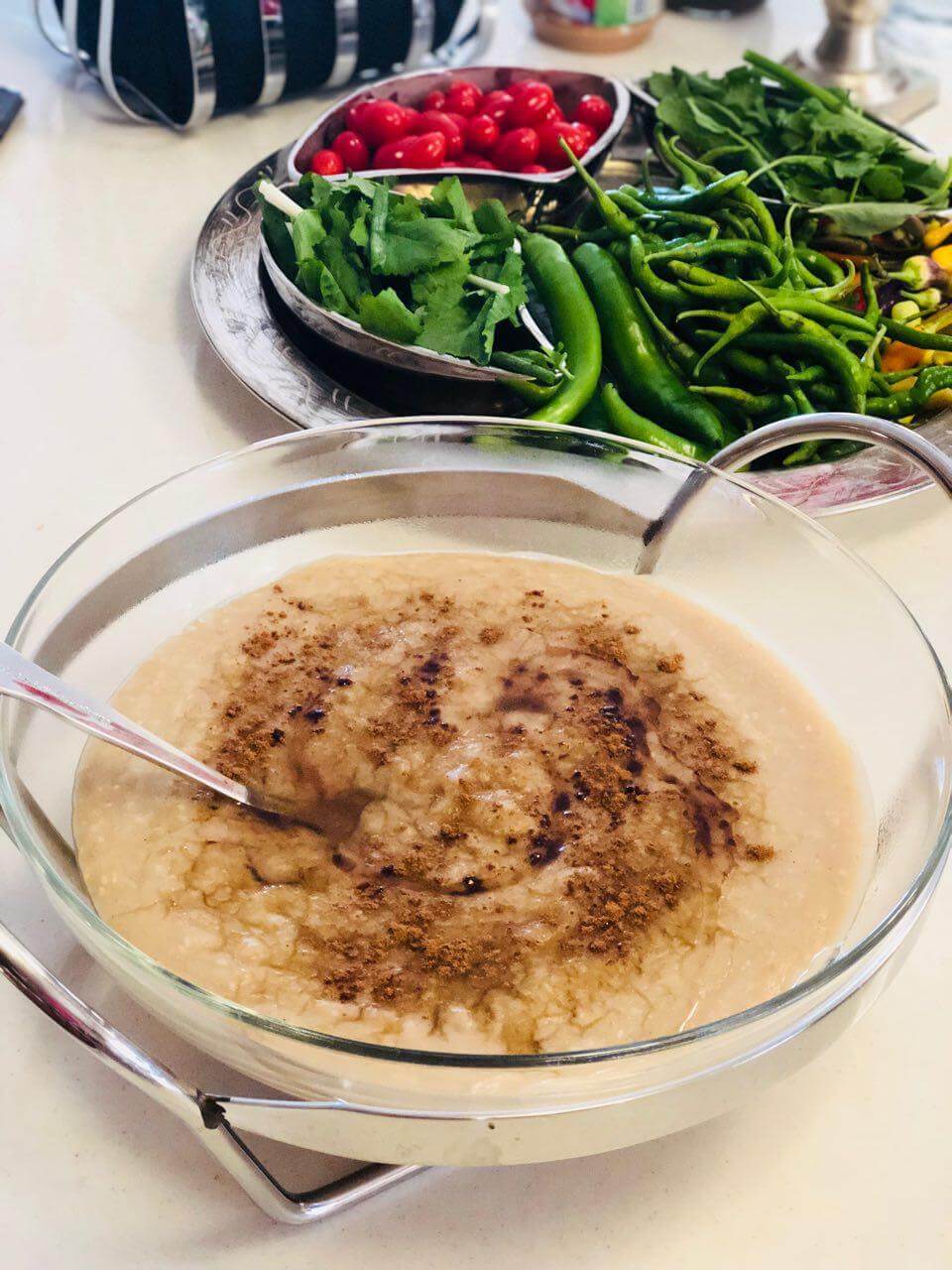 Persian cuisine includes a great number of vegan dishes. Even the well-known non-vegan Persian cookbook “Joon: Persian Cooking Made Simple” includes more than 50 vegan Persian recipes. Many dishes that include meat today were originally cooked vegan about a century ago. 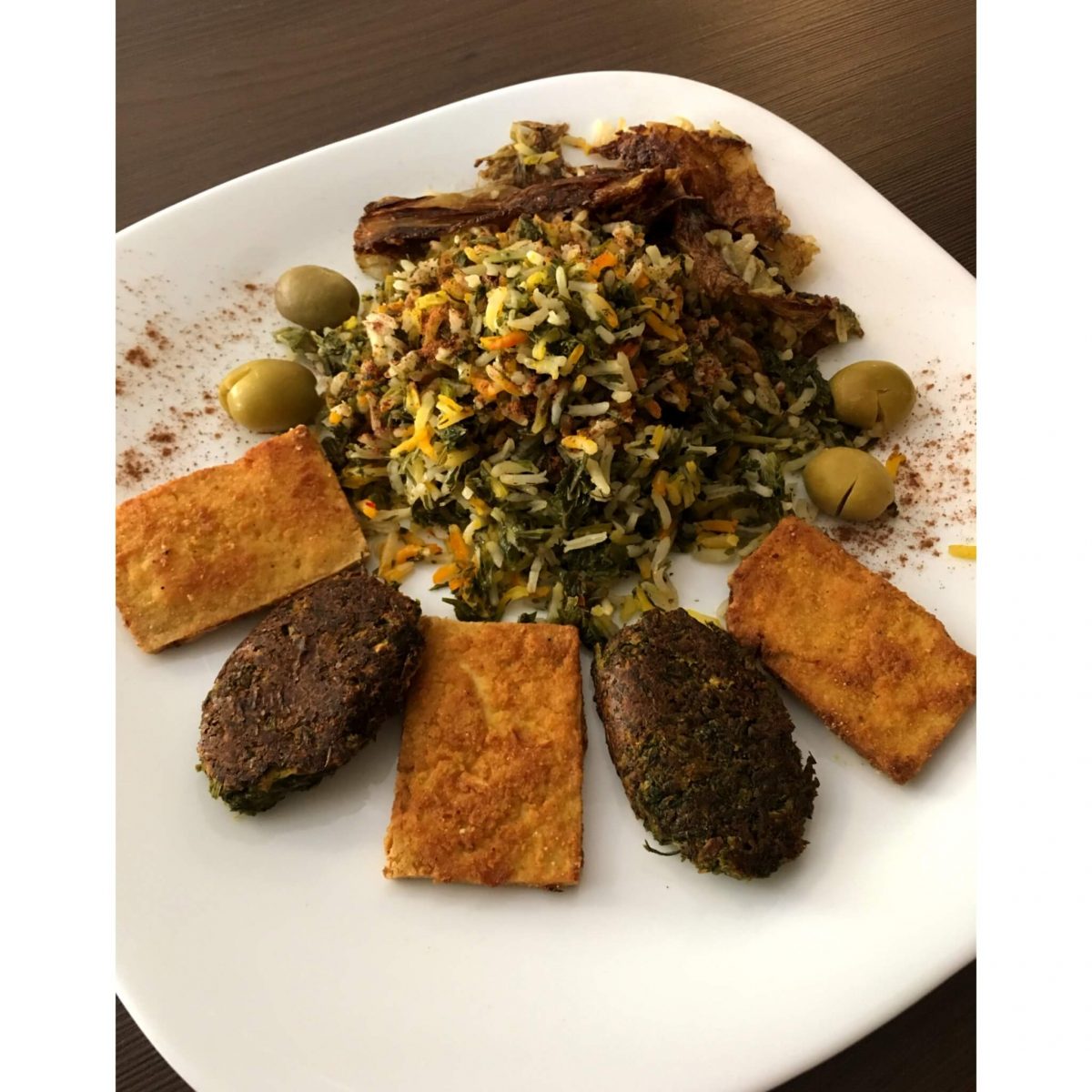 Polo, or polow, is Persian-style steamed rice cooked with herbs, vegetables and other ingredients. This dish is generally cooked vegan.

Depending on the special type of ingredients and spices used, there are plenty of different kinds of polo, such as adas polo (lentil rice), baghali polo (dill and fava bean rice), lubia polo (green bean rice), tahchin (rice cake), dampokht goje (tomato rice), and many other dishes.

All of these include rice as the main ingredient, but each has its own unique taste.

Adas polo, for instance, is something every foodie must experience. It’s a delicious combination of lentils and saffron-scented rice with fried raisins, onions and ground walnuts.

Iranians almost always cook rice in a way that forms a crispy golden layer at the bottom of the pot, called tahdig. Tahdig is a specialty of Persian cuisine that Iranians are crazy about. It’s usually made with thin slices of potato, flat bread, or the rice itself.

Want to taste these delicious Iranian dishes for yourself on a vegan tour of Iran? Mention the code "NOMADICVEGAN" when booking to get 5% off your tour with Iran Vegan Travel!

Check Out the Tours 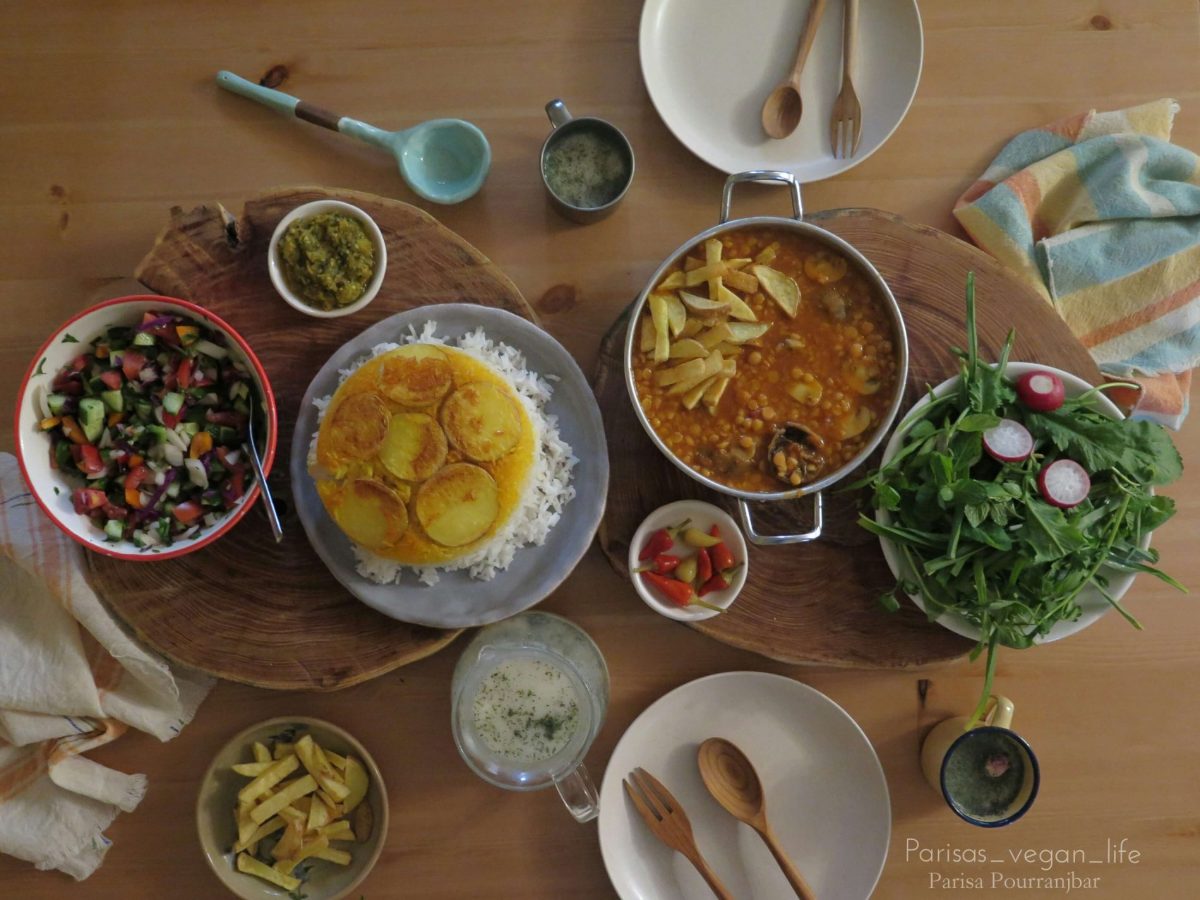 Khoresh is the general term used for various Persian stews, each with a unique taste. It is the most frequently cooked dish in Persian cuisine and is always served with plain rice, which is often decorated with fried barberries and saffron liquid (zereshk polo).

All kinds of khoresh were usually cooked vegan about a century ago, but today Iranians add meat or chicken. They now consider these to be essential ingredients to the point that, if you asked them to cook a vegan khoresh, it would leave them totally baffled.

Vegan Iranians, however, enjoy cooking all kinds of vegan khoresh, like gheimeh (split peas stew), ghormeh sabzi (herb stew), fesenjan (pomegranate stew), and many more. You won’t be able to guess the flavor of the khoresh based on the ingredients.

In vegan fesenjan, for example, there are pomegranate molasses and pomegranate juice, walnuts, sugar, butternut squash and quince. The result, however, is an amazing creation of a new flavor. 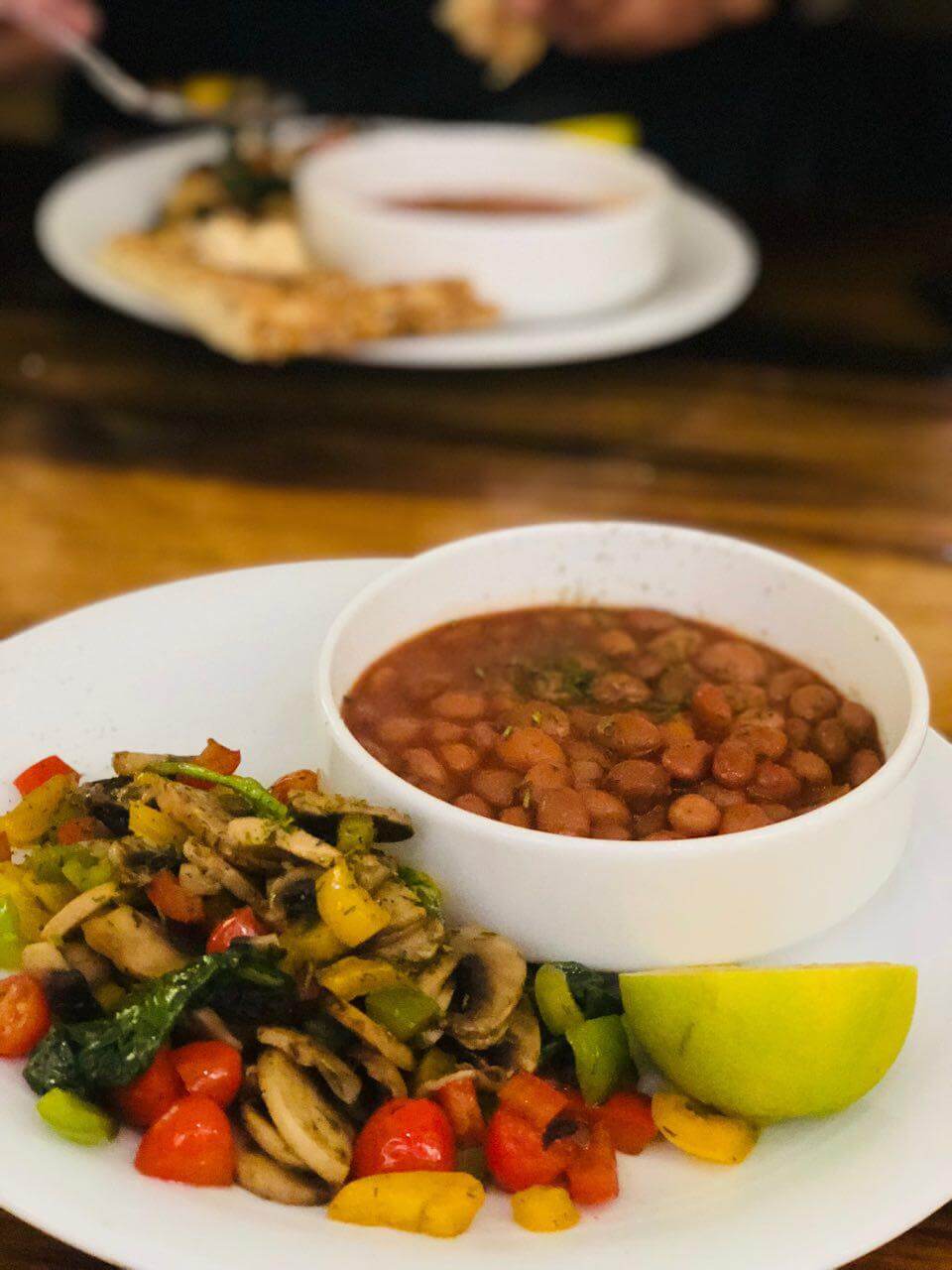 Khorak is very similar to khoresh (Persian stew) but is not served over rice. Instead, it’s eaten with flat bread.

Khorak lubia is a dish that you might underestimate for its simplicity, but when cooked using the Persian method it’s something you’ll definitely want to taste again and again.

Iranians make soups, but aash (also spelled “aush” or “ash”) is different. It might resemble soup, but it has a totally different taste and texture.

Aash consists of a subtle blend of various beans and/or green herbs or thick Persian noodles and other ingredients, depending on the type. It’s served with vinegar, verjuice, or kashk (drained sour yogurt that’s usually animal-based, but plant-based alternatives are available in Iran).

Among the most popular types of aash are: aash-e reshte (vegetable and noodle aash) and aash-e kalam (cabbage aash). Aash is much more than just a dish. It’s a culture, a cause for family gatherings, and a reminder of friendship and happy moments. 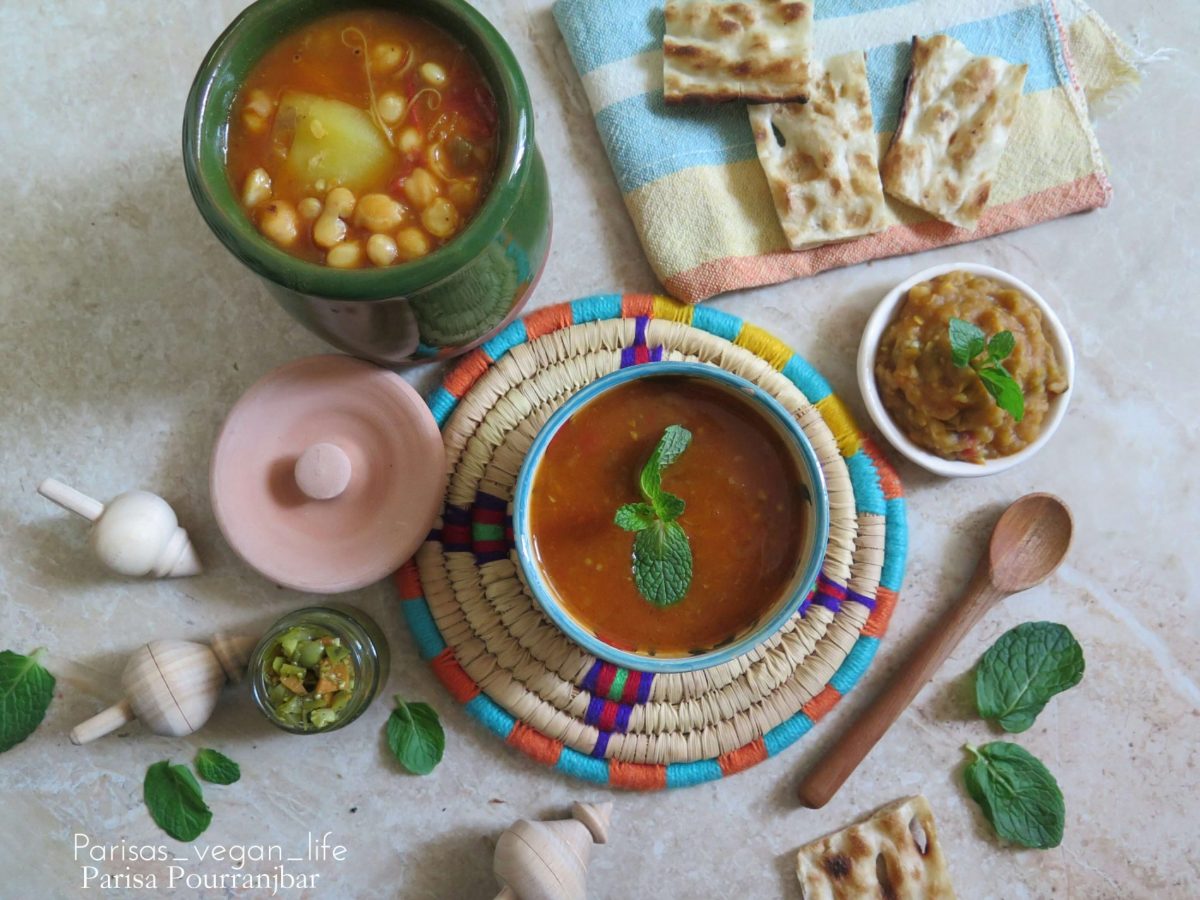 The latter two are generally considered to be meat dishes, but they get their taste mainly from the texture, method of cooking and other ingredients. When I mention vegan abgoosht or vegan halim to non-vegan strangers, they always chuckle. But I return the same chuckle when I tell them the halim or dizi I just shared with them was vegan and see the surprise on their face. 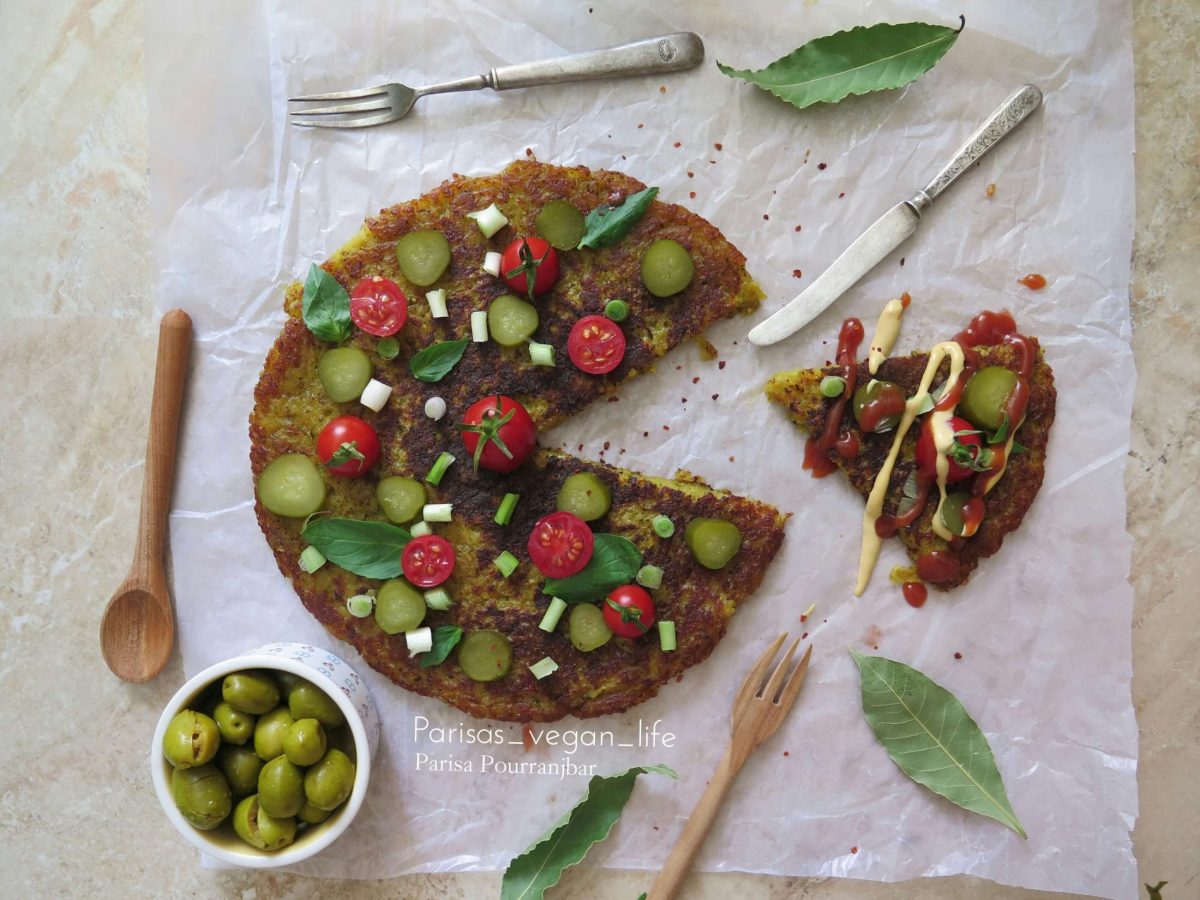 About 20 years ago, the idea of falafel shops as a cheap, outdoor fast food was introduced in Iran, and today they are plentiful all around the country. While typically vegan, they do tend to be unhealthy. 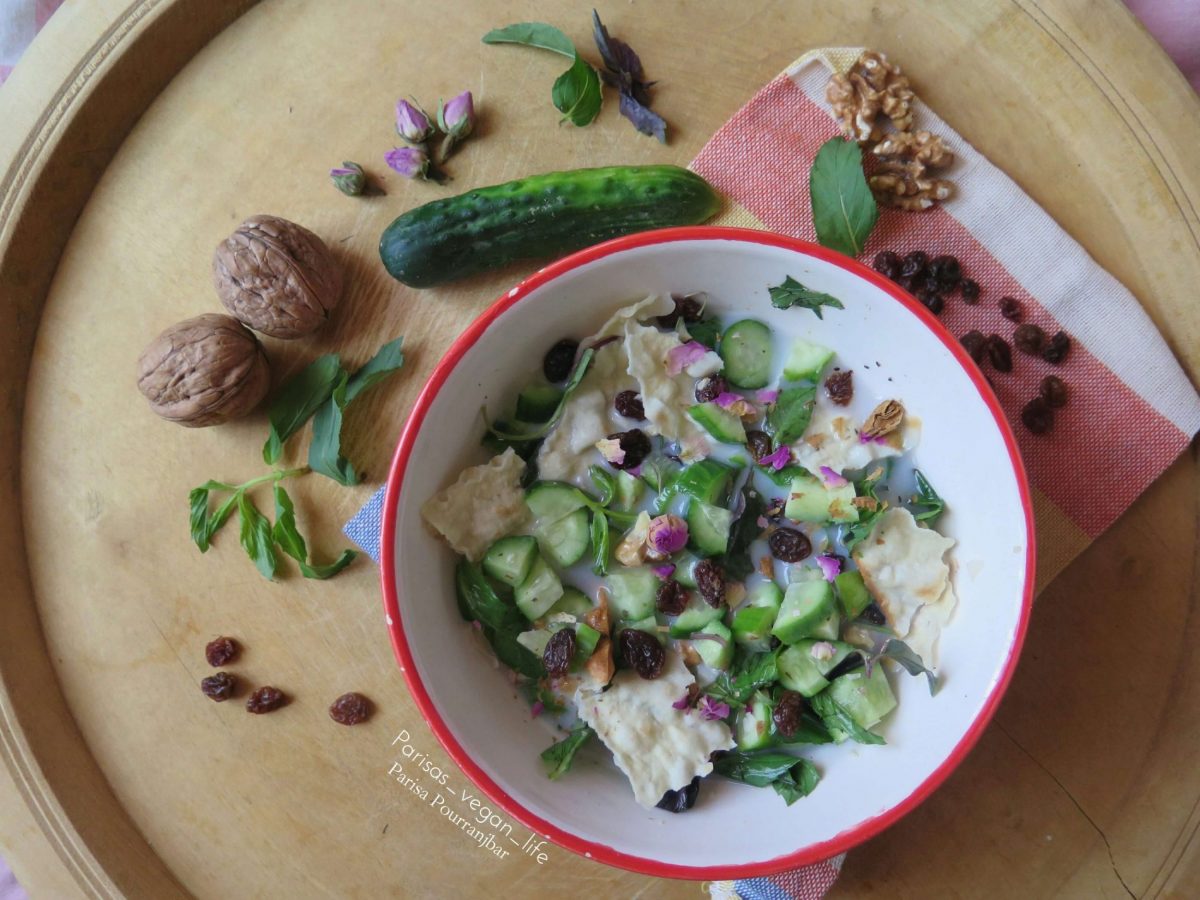 Although Iranians don’t traditionally eat desserts at the end of a meal, there is a whole world of Persian desserts to discover. Iranians have them as snacks or sometimes with their tea.

Some Persian desserts are special souvenirs of particular cities, like gaz (Persian nougat) and goshfil from the city of Isfahan, sohan (Persian brittle toffee) from Qom, masghati (rosewater and starch sweet) from Shiraz, or pashmak (Persian cotton candy) from Yazd.

Some other Iranian desserts, like sholezard (saffron rice pudding), halva, or samano (wheat pudding), are cooked on special occasions and during religious months.

Zulbia and bamieh (Persian jalebi) is a must-try dessert only available during the fasting month of Ramadan. In Iran, some people partake in a sacred ritual called nazri whereby they ask God for a favor. Then, as an offering, they make and distribute free food or desserts among neighbors or the needy. 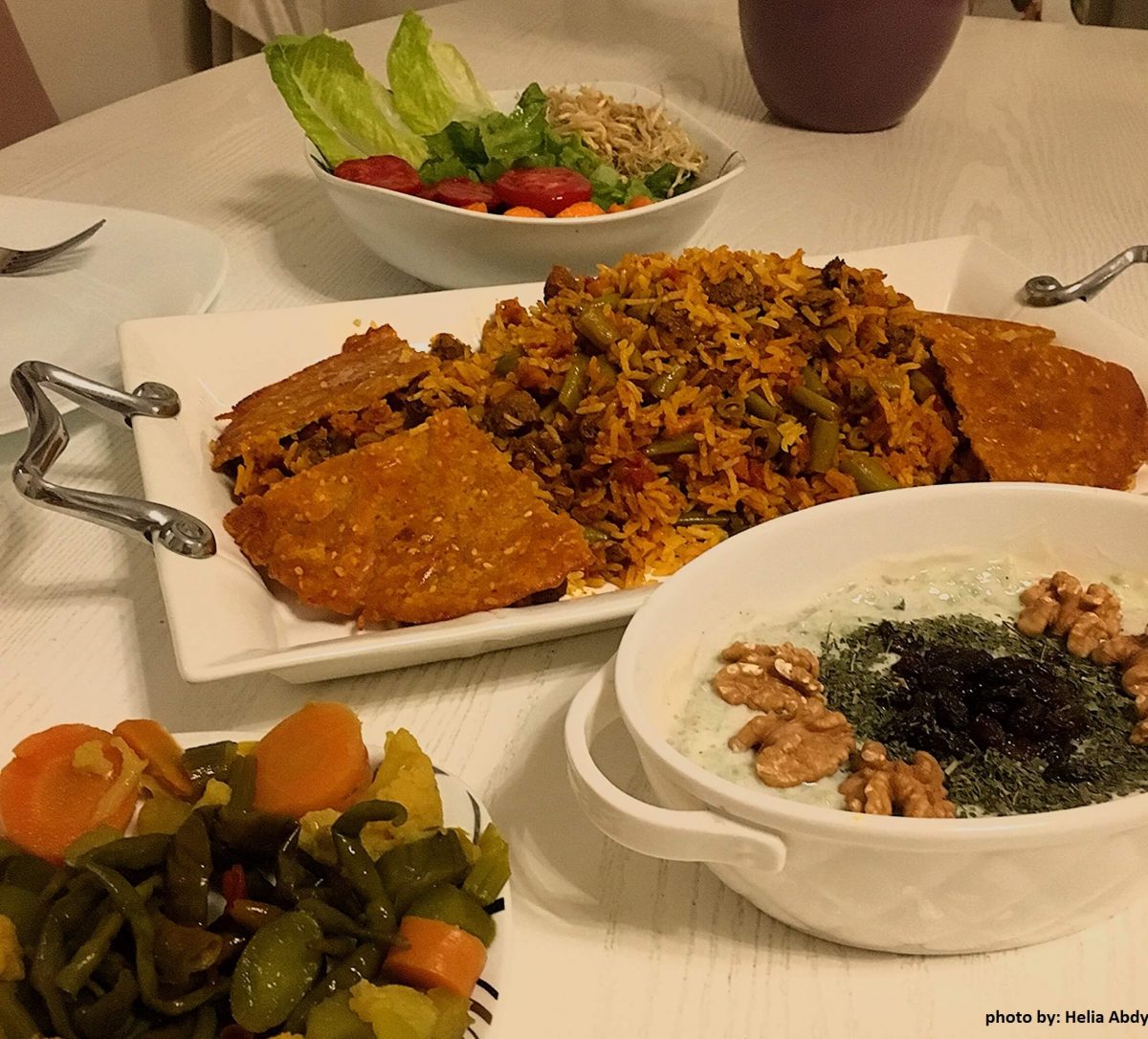 Lubia polo with persian side dishes

Experience the joy of standing in long lines of customers to buy sangak from a bakery in Iran, where the bread is traditionally baked with a sesame topping in brick ovens on the surface of small pebbles.

Iran is also a heaven for pickle lovers and has a wide variety of them. A palate of fresh herbs is a typical side dish at Iranians tables and includes an assortment of chives, Persian watercress, basil, parsley, cilantro, tarragon or other edible herbs and red radishes on top.

Apart from some vegetarian restaurants in the capital city of Tehran, you cannot count on restaurants in Iran for vegan food. Their only vegan option is typically plain rice and sometimes one or two particular dishes that are vegetarian but not vegan.

It is also very likely that you will end up with pieces of meat even if you order a vegetarian dish. This is due to a general lack of understanding and is definitely not a language issue. No matter how fluently you speak Farsi and explain the concept to the waiter, there are still the rest of the staff who won’t understand.

How to Eat Vegan in Iran?

Firstly, you need to decide whether you want to savor real vegan Persian dishes and have a deeper travel experience or just try to survive as a vegan in Iran! If you’re just trying to survive, there are some survival guides on the Internet listing a few vegan options, like street falafel sandwiches.

But the best way to enjoy vegan Persian food is in vegan Iranian homes. You could try asking your non-vegan host to cook vegan for you, but it would be a tough task for them, since they can’t imagine cooking dishes without meat.

Alternatively, there is also the option of choosing a 100 percent vegan tour operator that offers real vegan tours and also vegan services to solo travelers.

Want to taste these delicious Iranian dishes for yourself on a vegan tour of Iran? Mention the code "NOMADICVEGAN" when booking to get 5% off your tour with Iran Vegan Travel!

Check Out the Tours 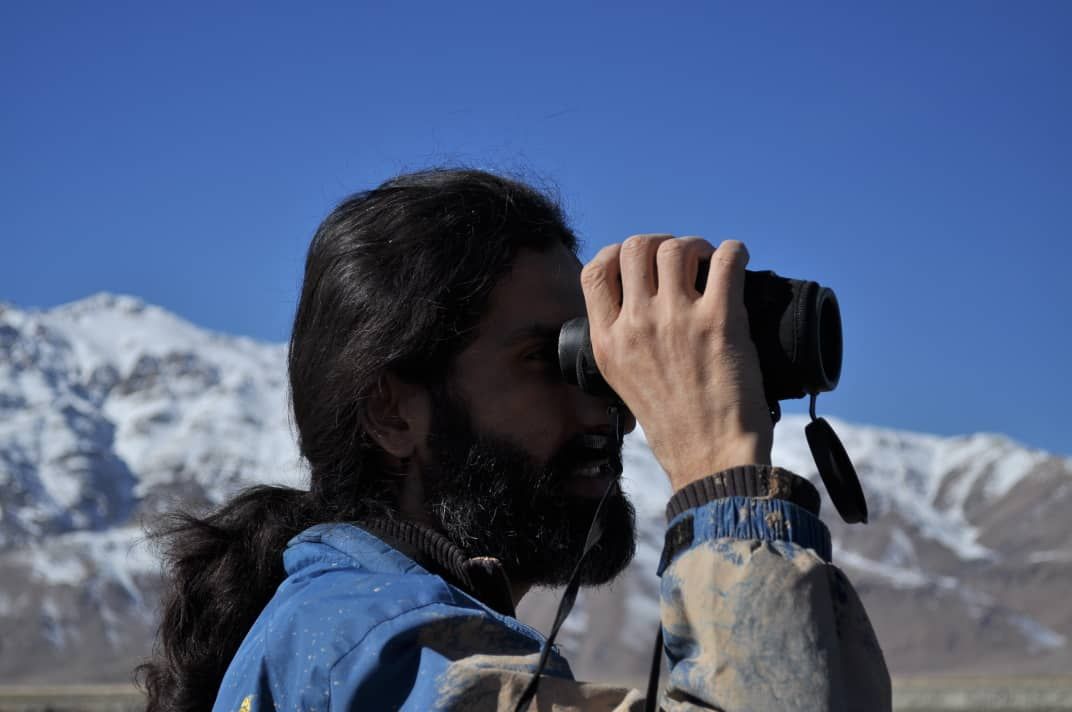 Sina is a passionate vegan and tour operator. He has a dream to make Iran travel a more enjoyable experience for vegans. Read more about his vegan Iran tours at his website, Iran Vegan Travel. You can also contact him at his email address: sinapoureshagh[at]gmail[dot]com. 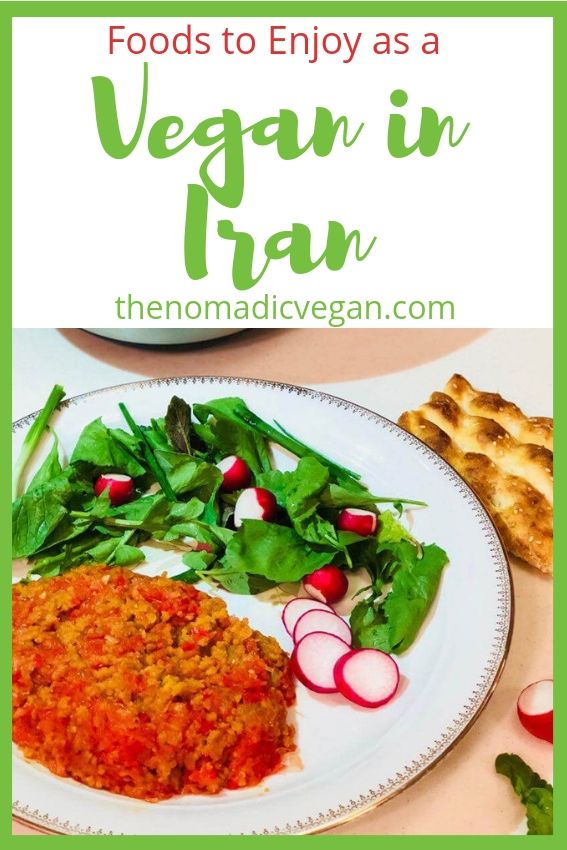