What to Eat as a Vegan in the Philippines 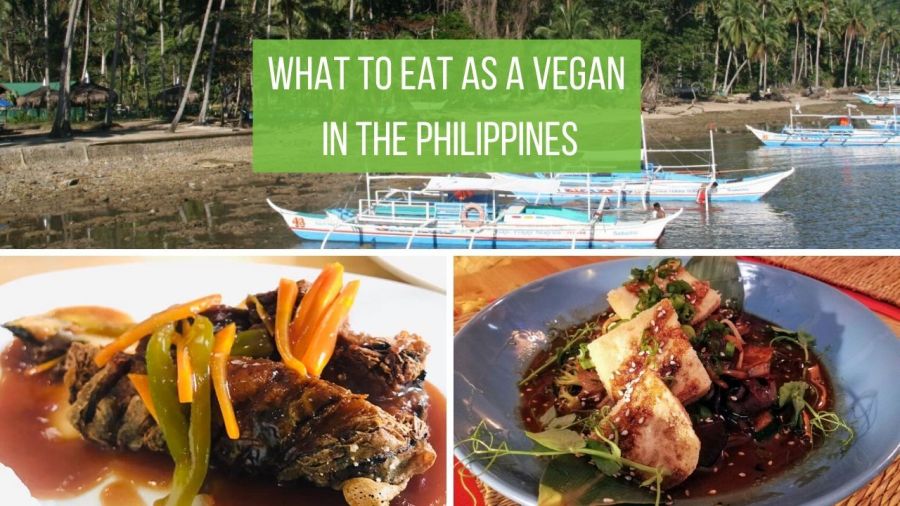 The Philippines is an archipelago known for its amazing beaches, fantastic diving and friendly locals. It’s a tropical paradise like no other. But what’s it like to be a vegan in the Philippines?

Filipino cuisine offers a unique mix of Chinese, Spanish, and Malay influences, as diverse peoples have settled here over the course of several centuries. Unfortunately, it’s not known for having many vegan options.

The Philippines has a reputation as a meat-loving nation, and this is largely true. But don’t despair just yet!

Nevertheless, Filipinos are always keen to try out new things. Recently, the vegan movement has really taken off in the country.

What is the Vegan Scene Like in the Philippines? 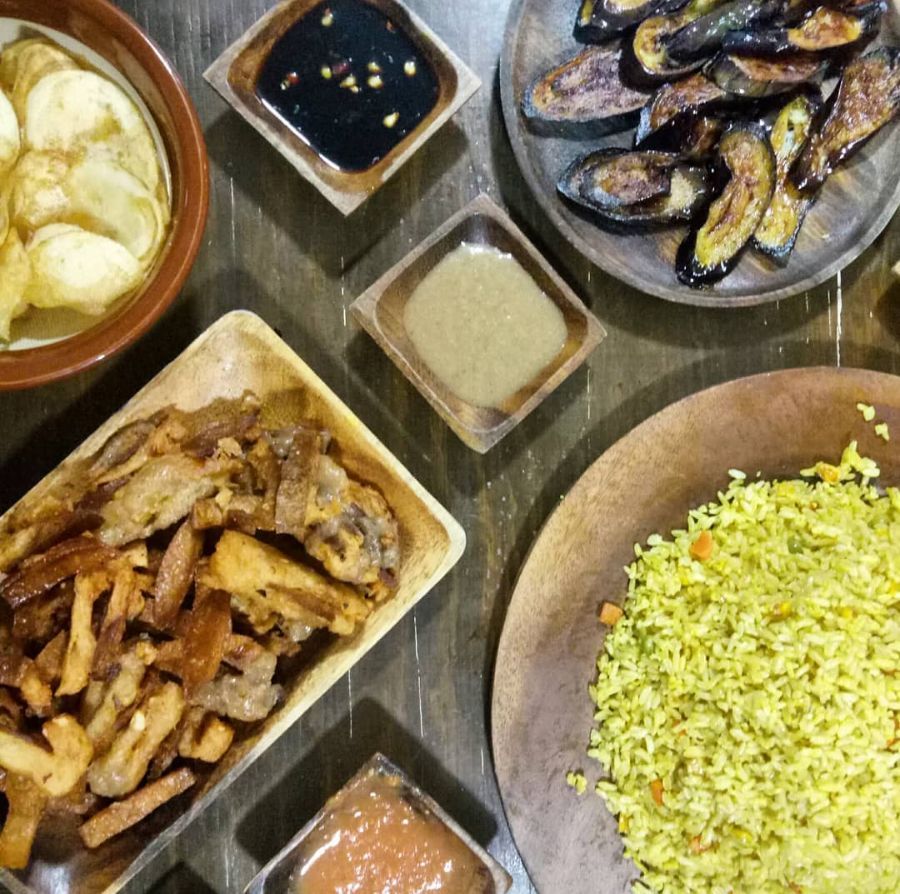 These days, you can find pretty much any traditional Filipino dish in a vegan version.

In Manila and other large cities especially, you’ll find enthusiastic groups of vegans and animal rights activists spreading the message of compassion for all animals. And quite a few of them have opened vegan restaurants.

According to Happy Cow, there are currently 52 fully vegan restaurants and 110 lacto-ovo vegetarian restaurants in the country. The largest concentrations of veggie restaurants are in Metro Manila  and Cebu, but every province has its own dedicated vegan community.

Vegan travel in the Philippines is easier now than it’s ever been. And don’t worry about missing out on authentic Filipino food either.

It’s true that Filipino cuisine is not one of the most vegan-friendly cuisines in Southeast Asia. You won’t find as many naturally vegan dishes here as you do in Thai cuisine, Vietnamese cuisine or Malaysian cuisine, for example.

And I’m certainly not going to claim that the Philippines is a vegan paradise like Bali.

But with a few adjustments here and there, it’s possible to make any Filipino dish vegan. While some of the vegan restaurants in the Philippines focus more on international dishes, others specialize in veganizing traditional Filipino specialties.

Here are a few to seek out: 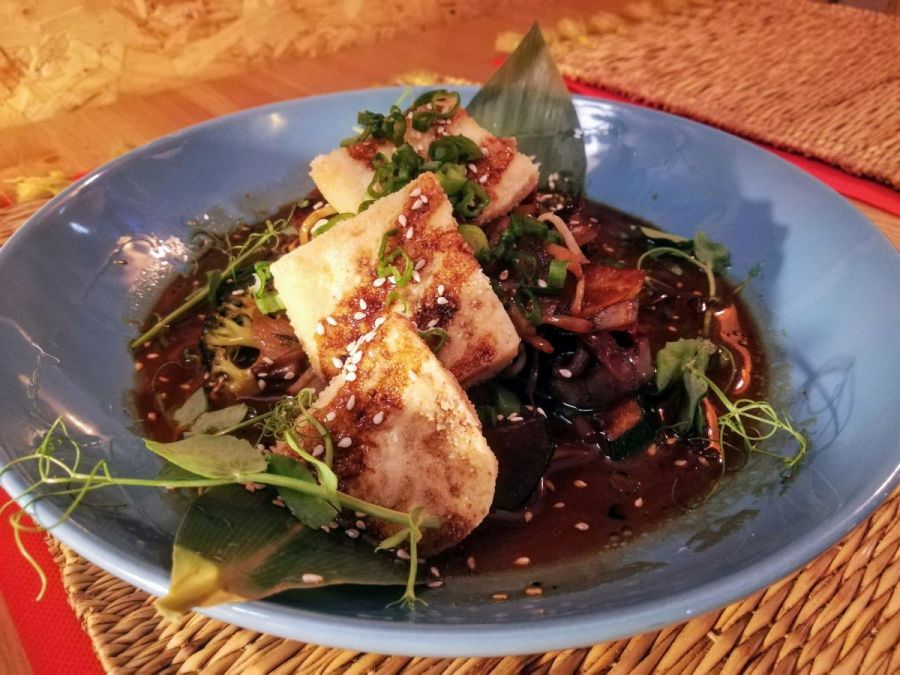 Cosmic serves adobo and many other Filipino dishes in vegan versions.

Cosmic is a hole-in-the-wall restaurant found in the heart of Poblacion – the Friday night and red light district of Makati City. A stairwell behind a convenience store found at the corner of P. Burgos and Gen. Luna leads up to a glass door.

The picture of an eye design popular with New Age followers is your only clue that you’re in the right place.

Cosmic’s signature dish is their homemade vagnet – a term coined for veganized bagnet, which is seasoned pork grilled to make it crisp. The texture and marbling colors of the vagnet makes it reminiscent of pork slices, yet it’s made without harming any animals. Most of the dishes in Cosmic are paired with these crispy pieces.

In addition to vagnet, beanuguan is also a popular choice. This is vegan vampire soup – a Filipino dish of stewed innards in chicken blood.

As horrid as that may sound, vegans can relax knowing that the chicken blood is replaced by a genius mix of pureed black beans and spices. The innards, meanwhile, are replaced with crispy tofu slices.

During the COVID-19 pandemic, Cosmic is open for takeaway with a limited menu, and they also sell some frozen products that you can heat up at home. These include frozen vagnet, sisig, BBQ isaw and longganisa. Check their Facebook page for the latest updates on reopening for dine-in. 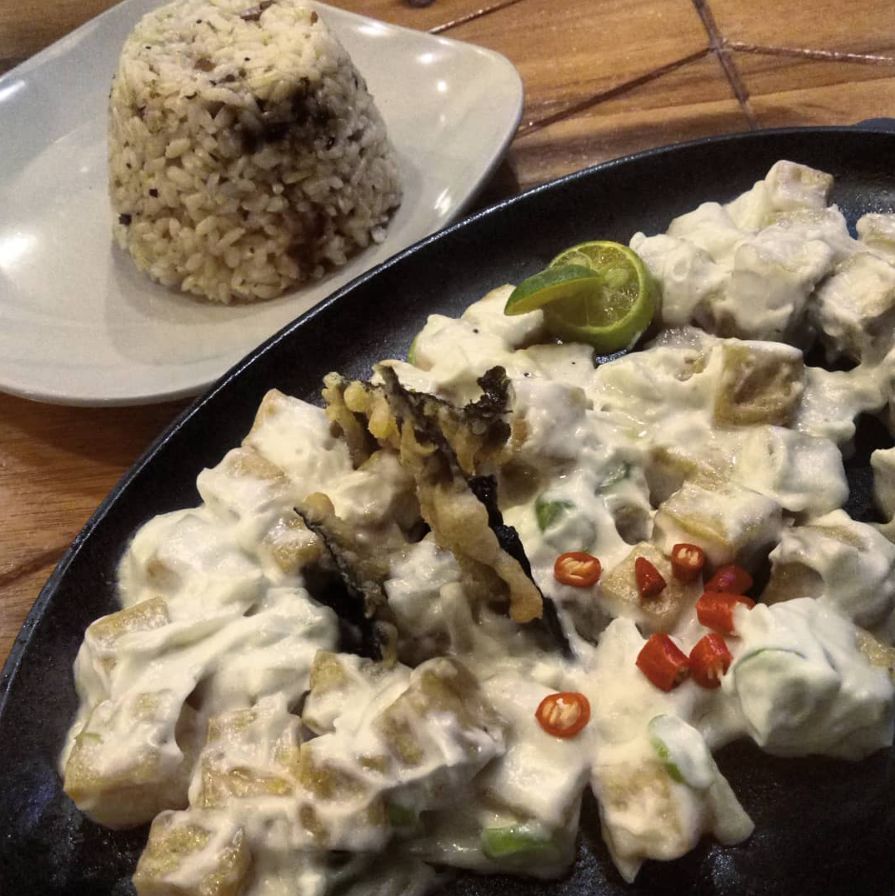 While the original sisig recipe calls for pig's head and chicken's liver, this one is totally vegan.

Also found in Makati is Greenery Kitchen, just a stone’s throw away from Circuit Makati. This family-owned restaurant serves up a wide array of Filipino dishes, replacing what are traditionally meat slices with either tofu or vegetable-based protein.

With bright and simple interiors and a cheerful staff, you’ll feel right at home in Greenery Kitchen.

Their menu is well-rounded, so that each item is a personal favourite of any Filipino at any given time. Notable choices are the sinigang, sisig, and kare-kare.

Sinigang is a tamarind-based soup with vegetable and meat slices. The soup has that distinct sour flavor that makes your taste buds tickle.

Sisig is a popular dish that used to be a drinking session staple and has now become a main course meal. And kare-kare is a hearty peanut stew. 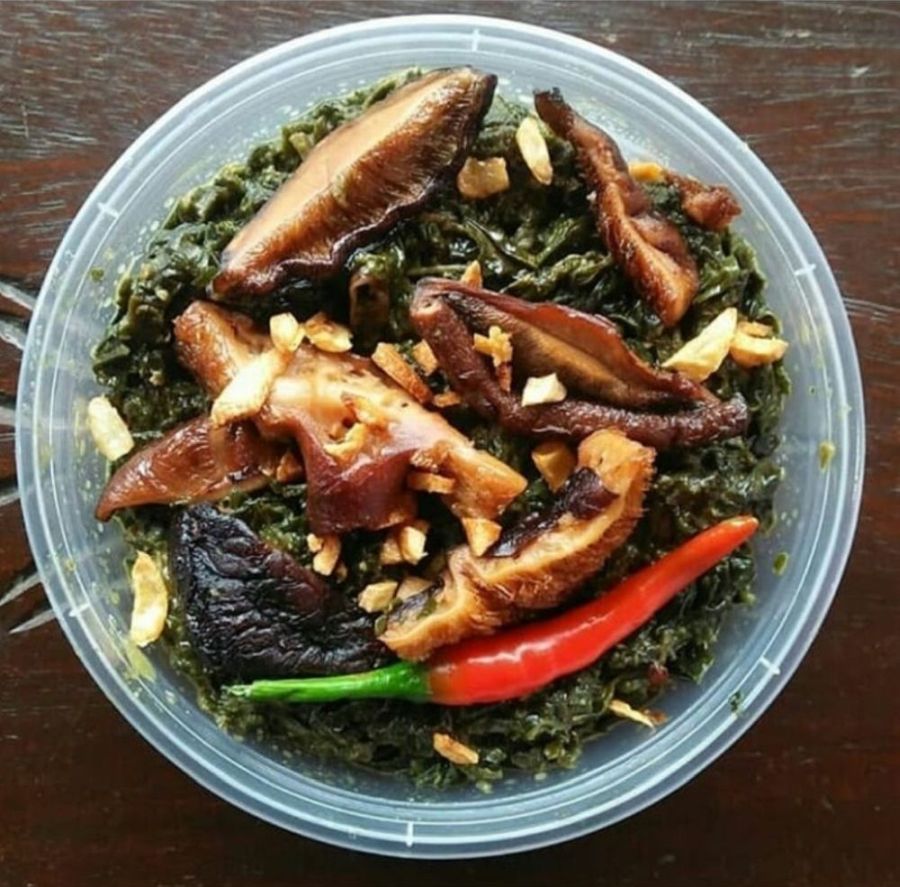 Gulay Lang is a fully vegan meal and dessert delivery service based in Quezon City. Like Makati, Quezon City is also part of Metro Manila. You can order a full weekly meal plan, or simply order the dish of the day.

They also offer party trays, in case you happen to make a bunch of new friends in the Philippines! Which is not unlikely, considering how friendly and outgoing Filipinos are.

The menu changes each week but often includes veganized versions of traditional Filipino dishes, such as adobo, bistek, laing, menudo, sisig and tokwa’t mushroom. Check their Facebook page for the latest offerings. 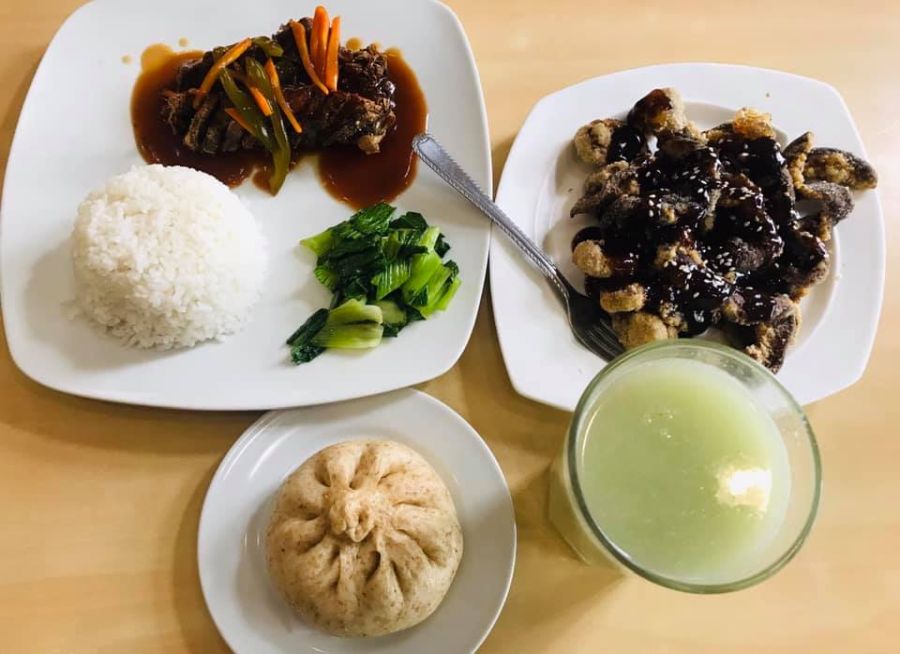 This ovo-lacto vegetarian restaurant in Quezon City has been around for 20 years and has developed a loyal following in that time. They are happy to adjust their dishes to cater to vegans and those with food allergies.

Their dishes include fried mushrooms, sipao (hot stuffed buns) filled with mushroom adobo, and a mock sweet and sour fish dish made from seaweed and soy.

On-site there’s also a shop that sells specialty vegetarian and vegan dry goods and frozen foods. During the pandemic, they are open for takeaway and delivery. Check their Facebook page for the latest updates. 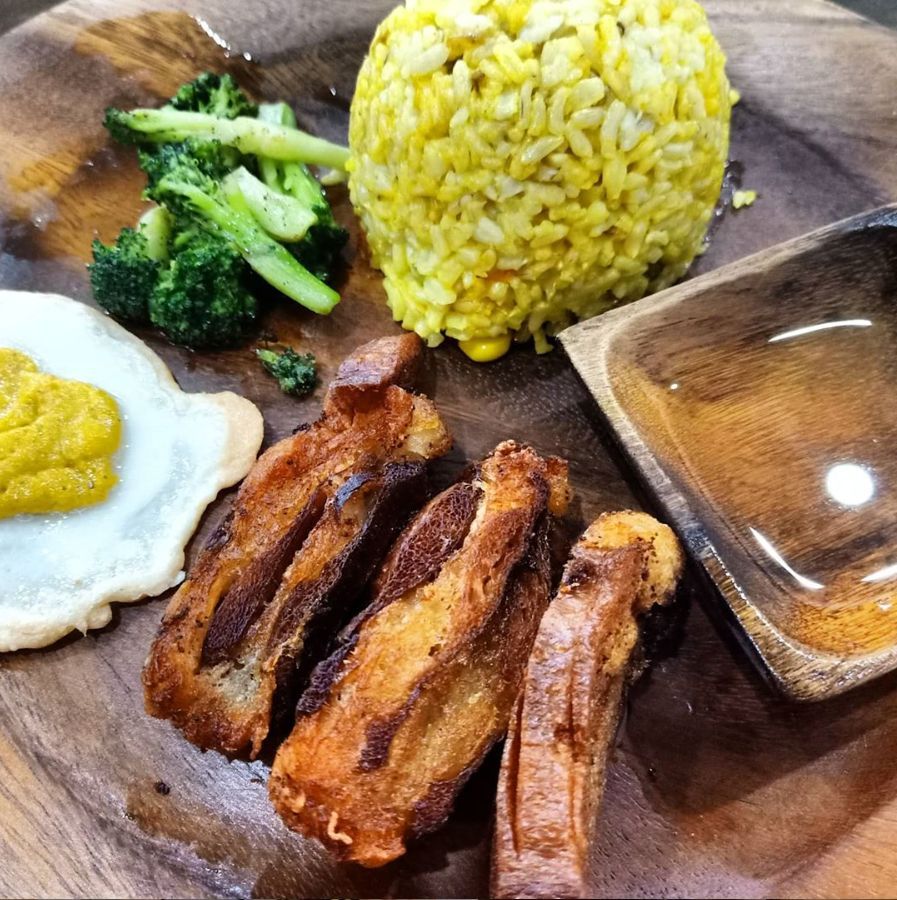 The very first all-vegan pizzeria in the Philippines offers a unique Filipino twist on this Italian classic. Their “You’re Adorable”, for example, is adobo on a pizza, with toppings that include onions, mushrooms and marinated “vork” belly.

Or you can order the “Breakfast Delight” topped with vegan tocino, a Filipino cured meat similar to bacon. They also serve their “vork” belly separately as a finger food with lechon sauce.

And they even offer rice meals with a vegan sunny side up egg! During the pandemic, Indulge is open for pick and delivery only. Check their Facebook page for the latest updates.

Vegan Street Food in the Philippines

Of course, no trip is complete without tasting the local street food enjoyed by the locals. While most Filipino street food consists of barbecued meat or fried seafood balls, traditional pastries and other delicacies are naturally free of all animal products. 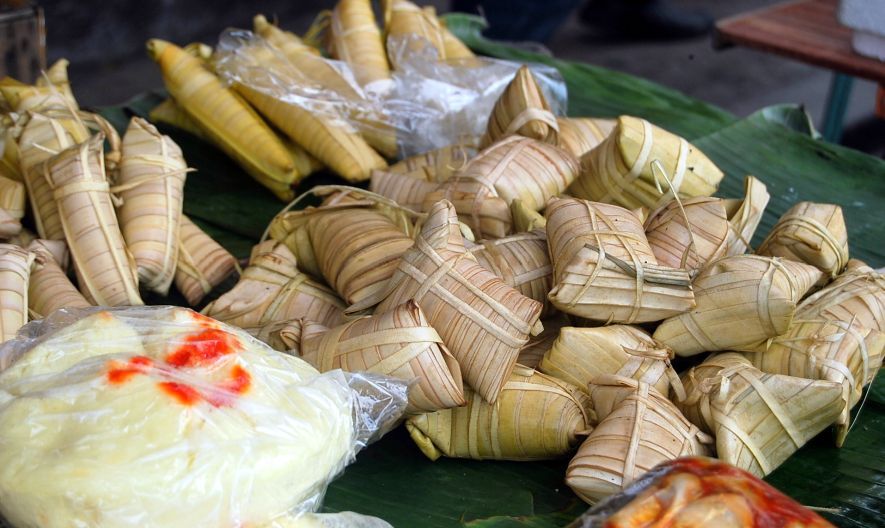 A crowd favourite are assorted rice cakes. They are collectively called kakanin; meaning “based on rice” as most of the pastries are made with sticky rice. Common ones are puto, kutsinta, and sapin-sapin.

The vendors are most easily found on Sunday mornings around a church courtyard as they try to sell to passing churchgoers. Look for the large rattan trays (bilao in Filipino) filled with colorful rice cakes.

Although kakanin is also sold in commercial bakeshop franchises, buying one from a street food vendor will give you the full experience. Plus, the ones sold on the streets are also more likely to be vegan.

Just make sure to ask if there is butter (or margarine) in it to be sure, as some kakanin are smothered with butter on top. Unfortunately, most margarine in the Philippines also contains dairy. 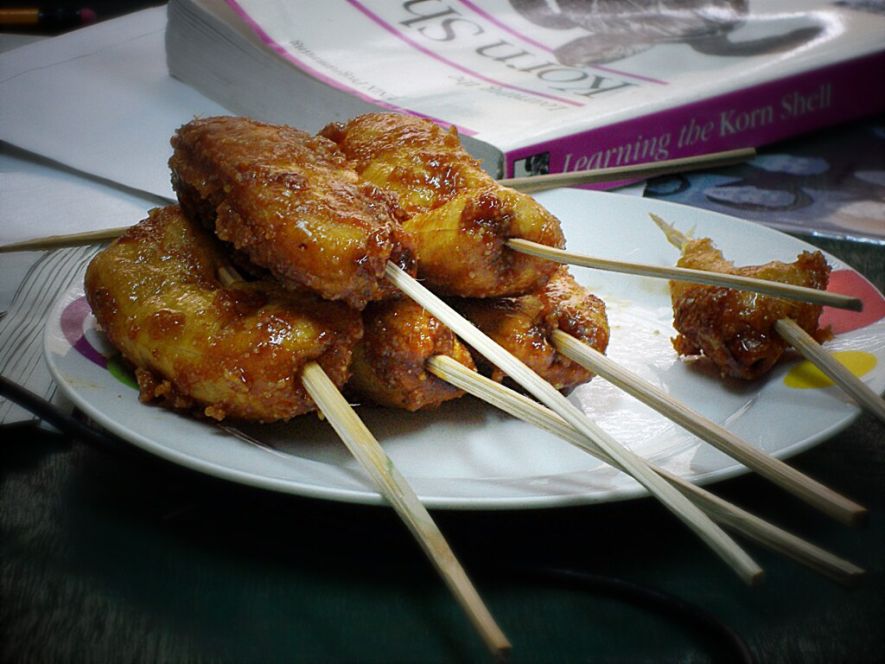 If you fancy eating something off a stick, try banana-que and kamote-que. These are sweet plaintains and sweet potato, respectively, that are skewered and coated in sugar syrup before being deep-fried.

The plaintain used to make banana-que is called saba, a variant unique to the Philippines. It’s also a key ingredient in a lot of other treats and desserts like maruya, turon, and minatamis. 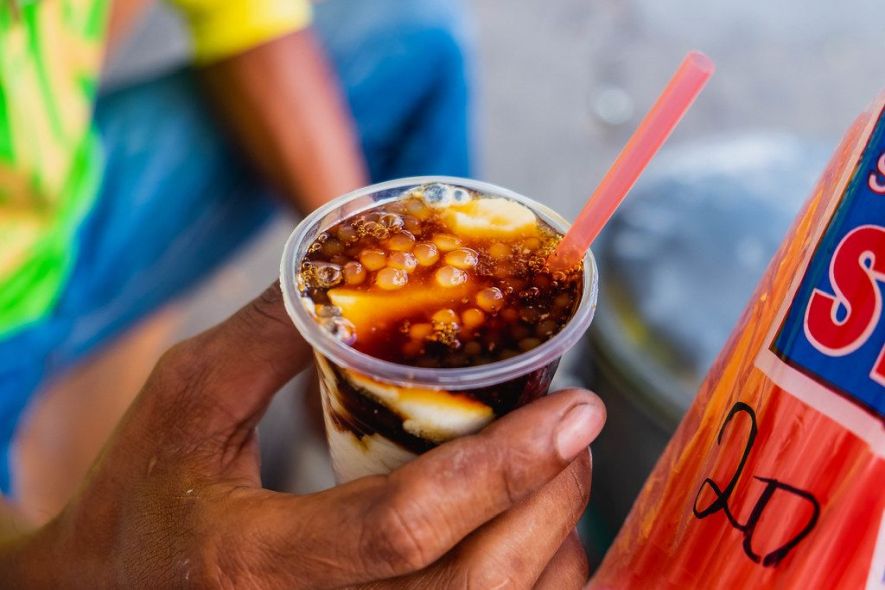 In the morning, look out for a man on the streets wildly screaming “taho!” (Tah-HoH). Taho is soybean pudding mixed with sugar syrup (or arnibal in Filipino) and tapioca beads (or sago).

If you call back to the wild call of the taho man, he will approach you carrying two large tin barrels on his shoulders, balanced on a bamboo rod. He assembles the taho on the spot, so you can tell him how much sugar syrup you want mixed in the taho.

Also, to cut down on waste while traveling you can give him your own mug or tumbler to put the taho in instead of the single-use plastic cups. Taho is a warm, sweet treat perfect for lazy mornings. 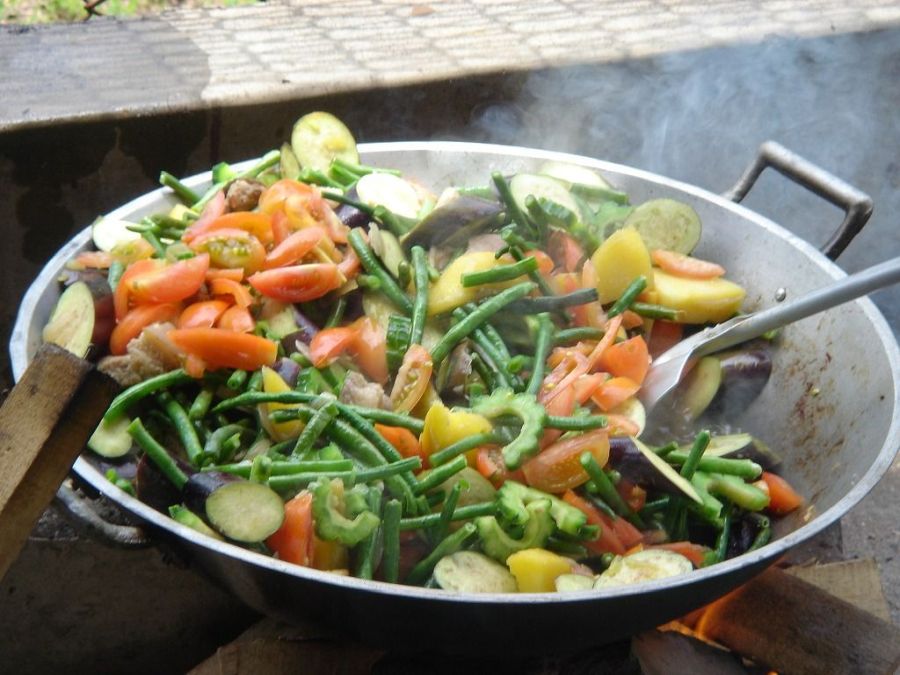 If you find yourself in an area with no vegan or vegetarian restaurant nearby, here are a couple of common Filipino vegetable dishes to look for: chopsuey (Chop-Suy) and pinakbet (Pea-Nak-Bet).

Both are basically stir-fried vegetables, but the difference is the vegetables used and the seasoning process.

Chopsuey is a Chinese-influenced dish of carrots, beans, bell peppers, cabbage, and chayotes. Be wary, as some versions use oyster sauce, little pork slices or shrimp for flavoring.

Pinakbet is an indigenous dish of eggplants, squash, beans, okra, and bitter gourd (locally known as ampalaya). Some versions use bagoong, pork or shrimp as flavoring.

Translations of Food-Related Words in Tagalog

English is an official language in the Philippines, and almost everyone can speak and understand it. Nevertheless, it’s still a good idea to have the Tagalog translations handy for when you need to read an ingredient list or a menu, or when you find yourself in a remote place.

With that in mind, here are some common food ingredients in the Philippines, with their Tagalog translations. These include both vegan and non-vegan ingredients.

*“Viand” (or “ulam” in Tagalog) is used to refer to any kind of food that is paired with rice. In the Philippines, pretty much anything can be a viand.

It can be a stew or a soup, for example. Some Filipinos would even go for noodles as a viand. Yes, noodles with rice. Carbs on carbs. Go figure 🙂 Rice is everything here, so the viand or ulam is equally important. 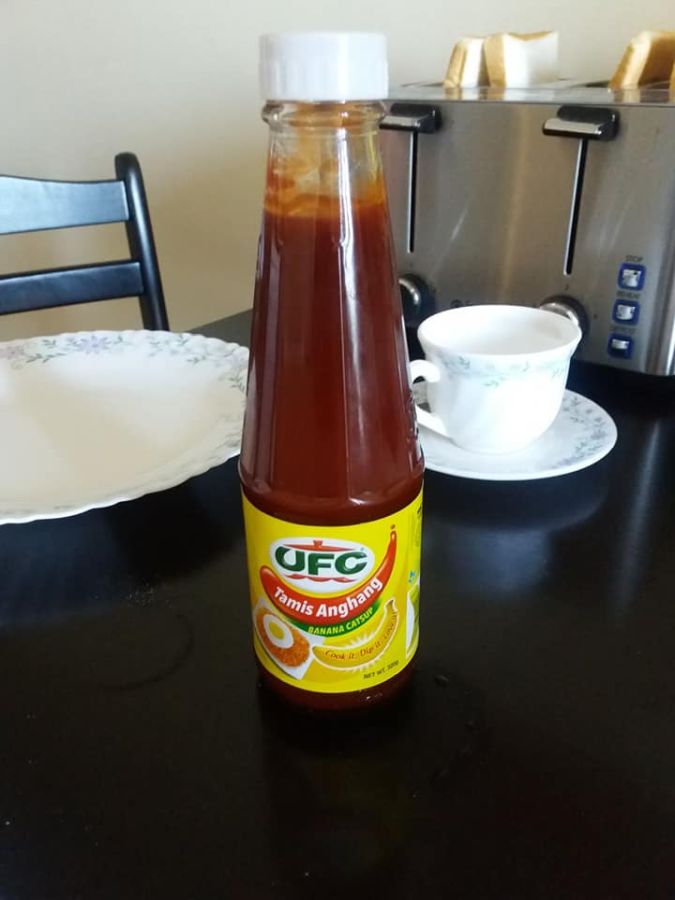 Many brands of banana Ketchup in the Philippines contain powdered milk.

Bagoong (Bah-Go-Ong) - seafood paste, usually made of shrimp or crab. Mostly used in kare-kare or to flavor many Filipino vegetable dishes.

Knorr Cubes - a brand of broth cubes, but often used to refer generically to any broth, whether cubed or powdered. No vegan version is readily available.

Paombong / Pinakurat (Pah-Ohm-Bong / Pea-Nah-Coo-Rat) - different versions of seasoned vinegar. These are mostly vegan, as the seasonings include chili pepper, onions, garlic, and spices.

*There is no direct translation for “I am vegan”.

Following a plant based diet while traveling in the Philippines is an adventure on its own. You can think of it like a scavenger hunt of sorts.

Vegan establishments are on the rise, and many have already made a name for themselves among the locals.

As always, check the HappyCow website or app to find the vegan and vegan-friendly options nearest you.

And as a last resort, ask a local. Filipinos are highly hospitable and will be more than happy to help visitors. Welcome to the Philippines!

MR Maximo is a Philippines-based flight attendant who travels all around the world. She is also a writer with works published online and in print. As the host of the Mabuhai Maxima podcast, she talks about personal development, travel and lifestyle. 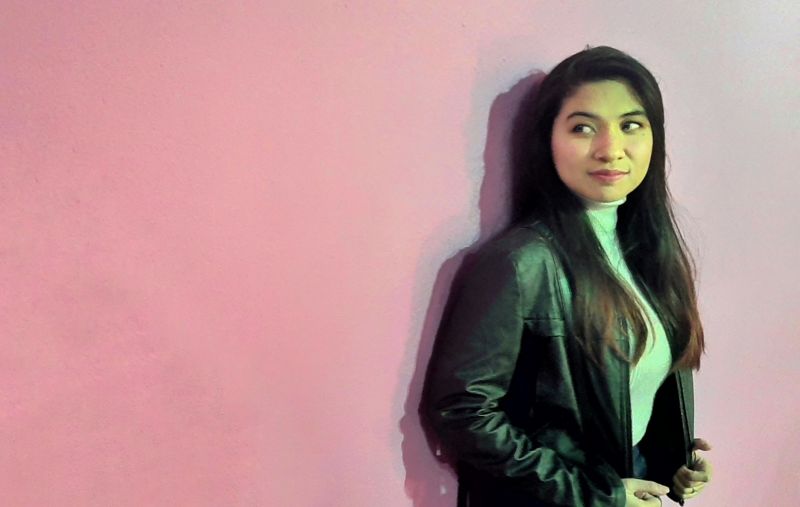 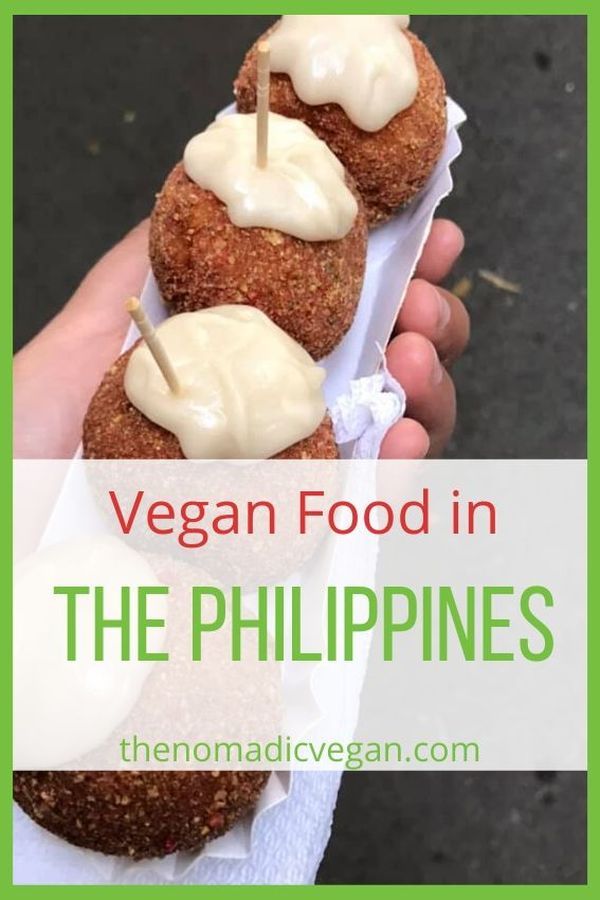 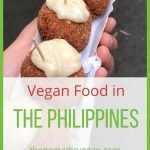