Vegan Pizza Around the World 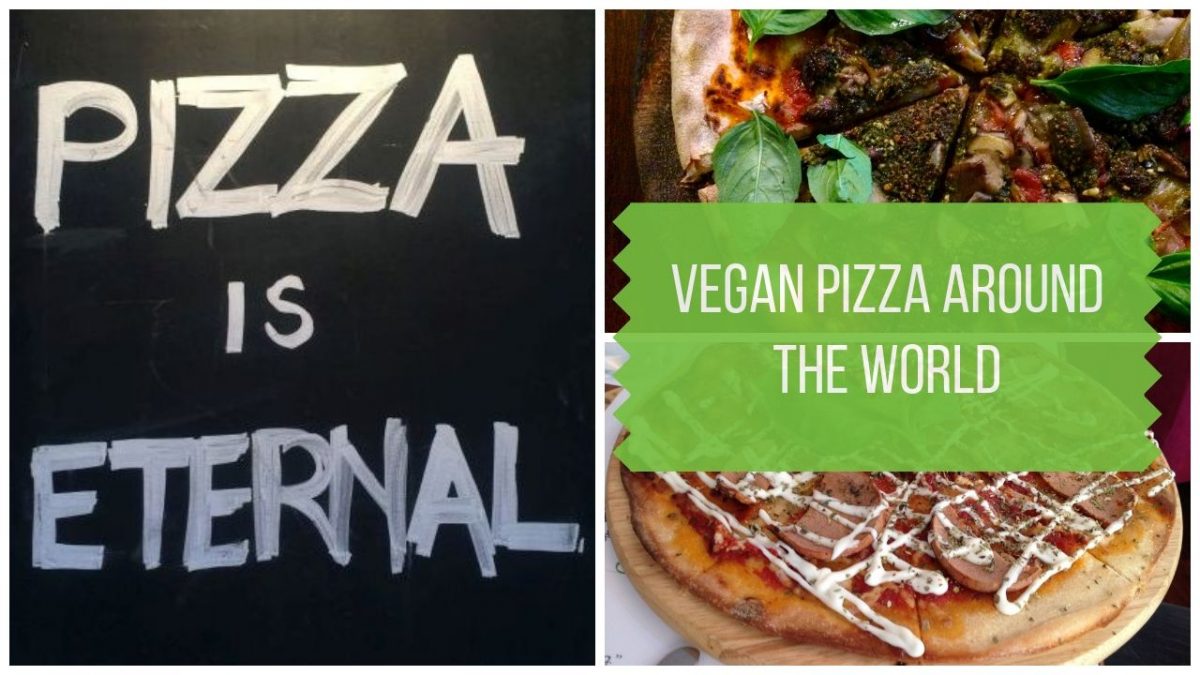 A couple of weeks ago, I had the most amazing vegan pizza at a place called Ay Mi Madre! in Madrid. If you want the full low-down, check out my Vegan Guide to Madrid.

To avoid repeating myself, I'll just give you the super-quick version: There were artichokes (the name of the pizza was "The Artichoke"). There was Violife cheese (definitely a contender for my new favourite vegan cheese).

There was no tomato sauce. That's right, this was a pizza bianca, which meant it was all up to the cheese to carry the flavour as the base of the pizza. Violife delivered. That's how good this cheese was.

This experience got me wondering what other vegan pizzas were out there waiting for me in the big, wide world, so I decided to ask some of my fellow vegan travel bloggers about their fondest memories of the pizzas they'd come across in their travels.

Travel Memories of the Best Vegan Pizza Around the World

For some, their most memorable vegan pizza was their first. Dale from A﻿ngloItalian Follow Us reminisced about his first vegan pizza experience:

I'll never forget the first vegan pizza I ever had. It was at a tiny punk-tinged place in Berlin called "Sfizy Veg". The owners are two Italian vegans who import the best quality ingredients from their home region and create mouthwatering pizzas that I sometimes find myself dreaming about.

The first time my Franca and I stopped there in 2014 we ordered two pizzas. One as a traditional tomato-based pizza topped with a faux gorgonzola, the other was a "green pizza", which means that the sauce base is pesto sauce rather than tomato.

Topped off with a sprinkling of cheese, mushrooms, and faux meat too, the total combined ingredients were out of this world, and the dough base itself was as good as they make in Italy, which is already a million times different to how bases are made in my native UK, or as thick as they come in the USA. 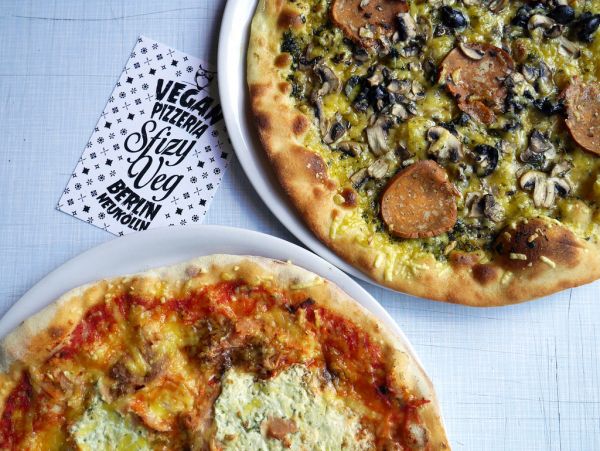 Shivya Nath from The Shooting Star, who has been vegan for just a few months, was also thrilled to find that she didn't have to miss out on pizza as a vegan:

Over 5 months ago, when I decided to take the leap from being a long term vegetarian to cutting out all animal cruelty from my diet (and gradually my life), I knew the one thing I'd miss dearly was cheese. When in doubt, no matter where in the world I was, pizza was an easy-to-customise and indulgent option as a vegetarian. And what's pizza without cheese?

I found my answer on a recent visit to Peacefood Café, an all-vegan haven on the Upper West Side of New York City. Behold, my thin crust pizza, with a base of minced roasted mushrooms, topped with veggies and daiya cheese (made from tapioca and arrowroot flour) - an explosion of flavors on my tongue, and as my carnivorous friend put it, "the pizza is so delicious that it's hard to believe it's also guilt-free." 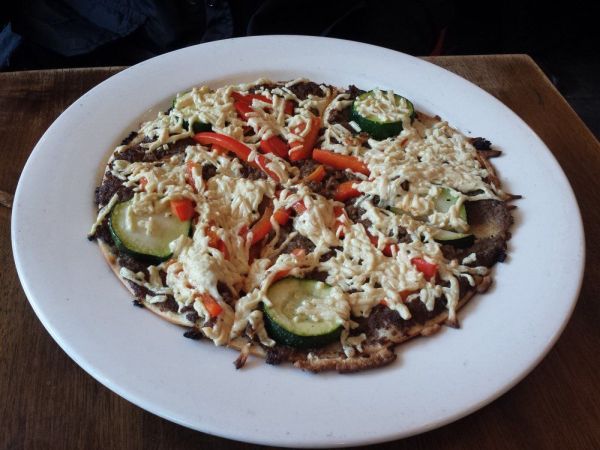 As Amelia from Plant Powered Nomad lamented, a “proper” vegan pizza can be hard to come by, especially when travelling in countries where pizza is not part of the local culinary tradition.

Vegans Café is one of the many vegan restaurants that it's taken me three attempts to get to, but as with most of the ones this elusive... it's well worth the effort to find it open. This was a good vegan pizza by any counts, but it was made even better by the fact that this beauty was in Kyoto, Japan. And it's a proper vegan pizza. One of the downsides of travelling alone is that I could only order one, rather than two to share, so I only tried the creamy vegetable one with the thin crust. And then I washed it down with an ice cream sundae. Perfect.

UPDATE May 2020: Vegans Café has unfortunately closed. But that's OK, because lots more great vegan restaurants in Kyoto have opened in the meantime! 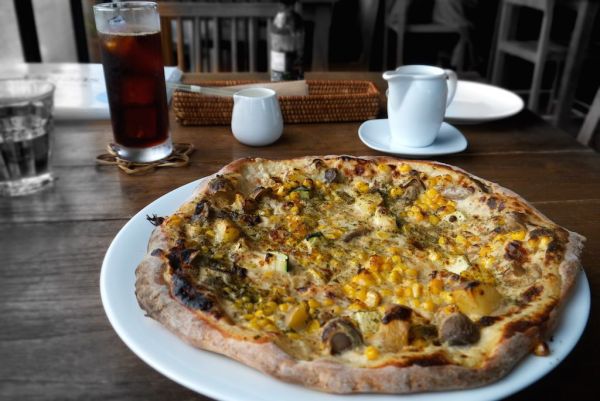 Some travellers, however, have found that pizza doesn't require cheese to be great after all. Like Sam from Indefinite Adventure, for example:

By Hand Pizza in Chiang Mai is the place to come in Thailand's second city for vegan pizza. It's not a fully vegan (or even vegetarian) restaurant, but there is a nice selection of vegan pizzas that occupy their own section of the menu. They don't use any kind of vegan cheese substitute, but the pizzas are not dry or disappointing by any means. The bases are thin and crispy and baked in a handmade pizza oven, and the flavour combinations are innovative and interesting without simply being weird. Be warned, if it's a busy evening, you may have to wait a while for your pizza, as the oven can only take three at a time. It's definitely worth it though! This is just the tip of the iceberg for vegan Chiang Mai - there are so many great places to eat all kinds of food in this extremely vegan-friendly city! 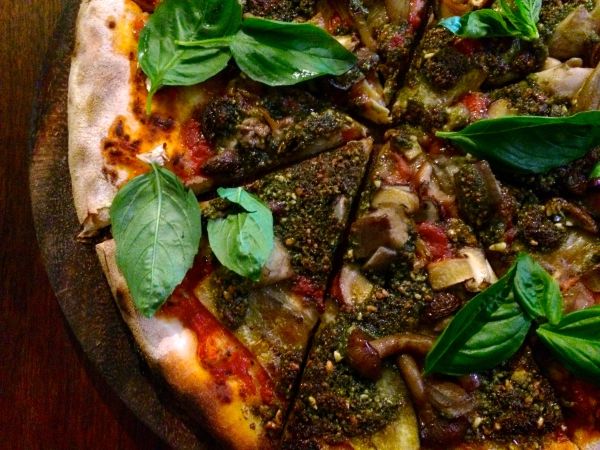 Cody and Giselle from Mindful Wanderlust even discovered that pizza is delicious when topped with hummus!

We haven't yet been to Italy during our travels, but nonetheless we have sampled some pretty incredible vegan pizzas in quite a few countries. Our most recent and memorable positive pizza experience was at Vegan Planet in Cancun, Mexico. Cody and I were skeptical about ordering a pizza in Mexico, but we were so pleased with the first pizza, we ordered another during our second visit. Vegan Planet's pizza was cooked until the thin crust was perfectly crisp, and the tomatoes, and mushrooms roasted. Instead of tomato sauce, they cleverly used hummus to cover the crust, and topped it all off with a generous helping of mixed greens, and macadamia nut parmesan. Truly a pizza as beautiful as it was delicious.

Caitlin from The Vegan Word found the best of both worlds in the vegan Mecca that is Brighton:

Purezza is the first 100% vegan pizzeria in the UK, and alongside vegan versions of traditional pizzas like margherita and quattro stagioni, they also offer more unusual takes, like pizzas on a butternut squash base, hummus base or asparagus base.

In addition to their Brighton location, Purezza also has a restaurant in Camden. Purezza is just one of many great places for vegan food in Camden, one of London's most vegan-friendly neighborhoods. 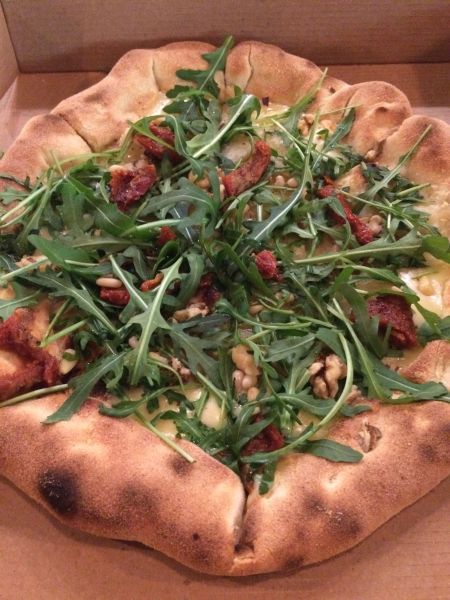 And for Alynda from Vegamundo, her pizza memory wasn't so much about the pizza itself. In fact, she wasn't even sure what toppings were on it apart from pineapple! Instead, what she cherished was the feeling of comfort and contentment it gave her during a trying situation. That's why they call it comfort food, after all!

Here I am enjoying a slice of pizza for brekky at sunrise, at Jakarta International Airport. Because a few days before I had missed my flight to Vietnam due to domestic flight delays, so this time I arrived nine hours before my flight to Thailand would depart. It was such a happy moment and the leftover pizza from the night before made it even better! 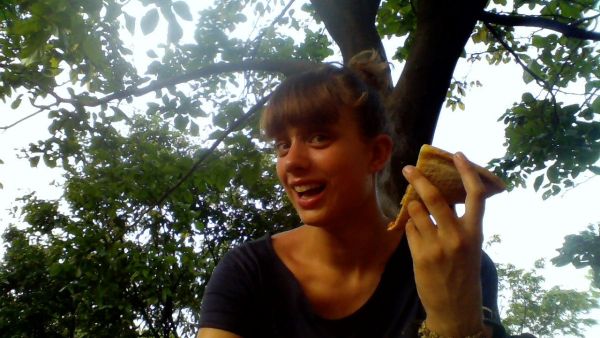 Carolyn of The Healthy Voyager was so excited about all the vegan pizza she's come across on her travels that she shared her memories of not one, not two, but THREE vegan pizzas, from Portland, Oregon, USA to Athens, Greece:

UPDATE: Rosebud Café has unfortunately closed.
Rosebud Café in Athens, Greece is a cool, hip place in the cool hip part of town called Kolonaki. A vegan restaurant, bar and place for live music with a terrific menu and some of the best food in all of Athens.

In fact, their vegan souvlaki was a hit with my non-veg friends who claimed it was better than the traditional meat souvlaki! Ok, so my souvlaki was the bomb and their vegan pizza was incredible! The pizza was bursting with flavor, all made from scratch (including their vegan cheese) making it one of my top 5 pizzas from around the world! The staff is super friendly and I still dream about my yummy meal ; )

Then there's Bella Faccia Pizzeria in Portland, Oregon. Pizza pie for everybody, I was stoked to be able to order a fully vegan, fully delicious, piece of pizza. It’s not every day that I can walk into a pizza joint and get 1 slice. Usually I have to special order it and get the whole darn pie but at Bella Faccia, they know to have it ready and waiting. The vegan is rad with its roasted pepper, tomato & cashew base, topped with marinated tempeh & loaded with veggies. And the crust is boss! Nothing rocks harder than killer crust, ok and vegan cheese, but crust is king. Bella Faccia also offers great salads and a variety of baked goods from Piece of Cake Bakery (lots of goodies for gluten free peeps & vegans). 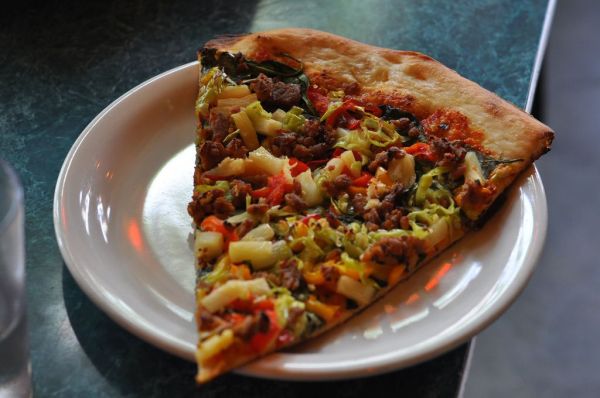 And finally, Masa of Echo Park is in one of the coolest neighborhoods in LA, and the smell of homemade marinara sauce and pizza will knock you off your feet when you walk by. Known for their Chicago style deep dish pizza, the 40 minute wait for that giant pizza cake is worth it. Offering vegan options for both Chicago style and thin crust pizza, as well as tons of other italian dishes, Masa is a must visit in LA to curb your pizza cravings. 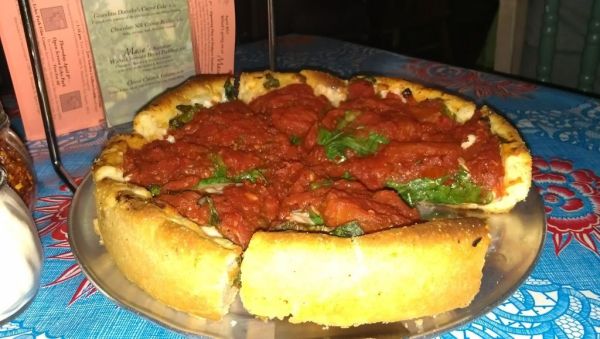 Woah, that was some serious vegan pizza overload! But you know what the crazy thing is? None of us chose a pizza from Italy! That makes me kind of sad, because Italy does, of course, have the best pizza in the world. I'm not aware of any pizzeria in Italy that makes pizza with vegan cheese, but so what? Real, Italian pizza fresh out of a wood-fired oven is so good that you really don't need the cheese. And in fact, just like not all sushi in Japan is made with fish, not all pizza in Italy is made with cheese either.

So, to make amends with my favourite country in the world, I'm adding one more vegan pizza to this post. The one is from a very vegan-friendly, all-organic eatery in Rome called Origano. Their eponymous pizza, "The Origano" is cheese-free and comes loaded instead with basil, mushrooms and every seasonal vegetable under the sun. Now THAT is a pizza. 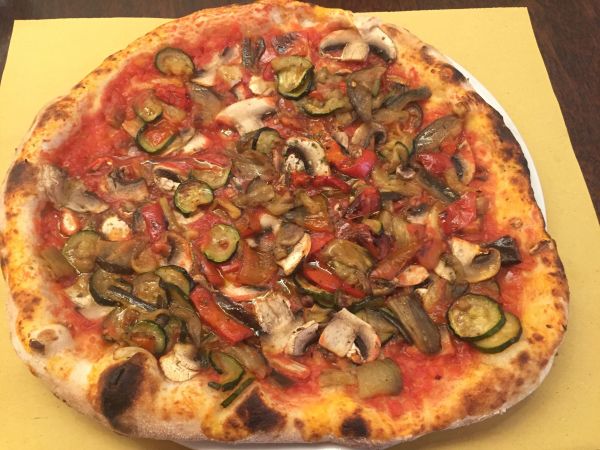