Guest article by Joanna Draus of Your Vegan Coach. 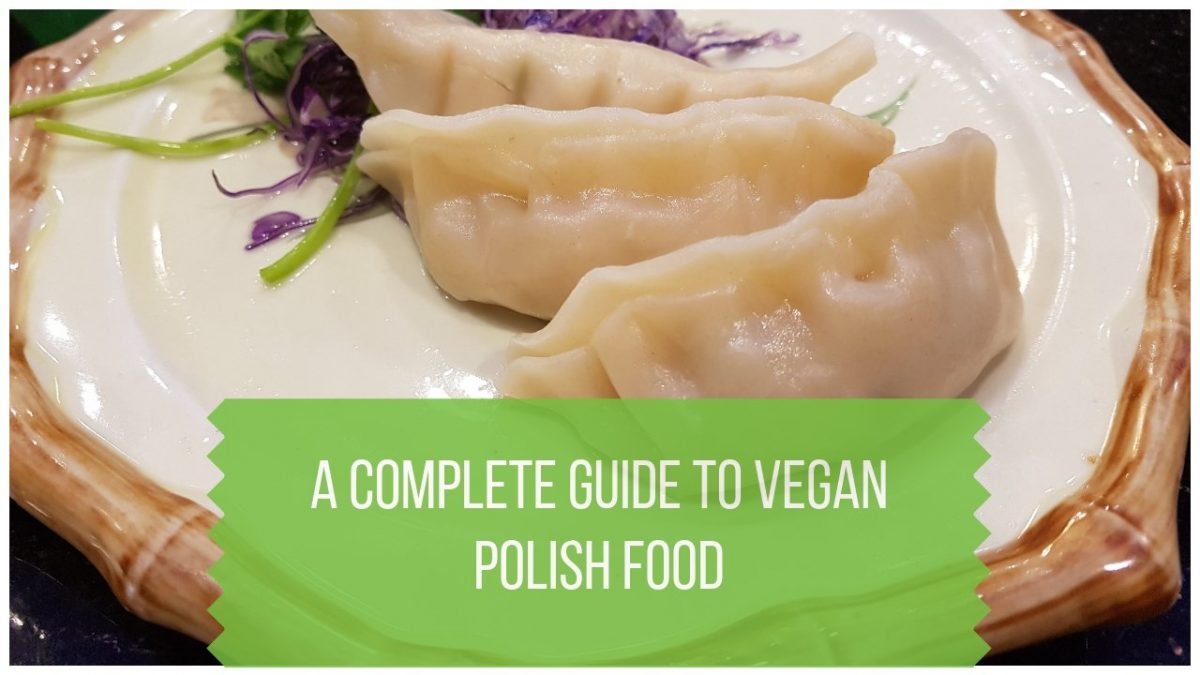 Polish cuisine has a reputation of being a heavy cuisine filled with meat and other animal products, but vegan Polish food is easier to find than you think!

Since meat and dairy weren’t always easily accessible in Poland in the past, lots of vegan dishes have been developed throughout the country. Across different regions of Poland the local varieties and names of these vegan Polish dishes vary.

Some of these foods are still popular and well established in the Polish cuisine of today. Traditional Polish dishes are quite mellow, rich in carbohydrates and warming, due to the country’s continental climate with short summers.

Wild mushrooms and forest fruits such as blueberries and cranberries are also used in traditional Polish dishes. Poppy seeds are a main ingredient in many desserts.

As for the seasoning of Polish food, fresh dill, chives, parsley, onion, garlic and horseradish are very characteristic. So are dried herbs such as caraway, marjoram and estragon.

Fermented foods are also very popular in Poland. The main ones are ogórki kiszone (pickled cucumbers) and kapusta kiszona (sauerkraut). Unlike in some other countries, in Poland these foods are fermented naturally in brine, with no vinegar added. They are a natural source of easily absorbed probiotics and vitamins, including vitamins C, B2, B3, B6, B12, E and K.

The traditional Polish main meal is typically eaten between 3 and 5 pm and consists of a first course, a second course and a dessert. If you’re travelling in Poland and you’re dining in a vegan establishment, I would encourage you to try as many of these Polish dishes as you can.

In addition, sweet soups, known as owocowa or “fruit soups”, are served either hot or cold during summer months.

All of these Polish soups are delicious and can be easily veganized. However, most of the savory soups are prepared with meat broth these days. The fruit soups are of course based on cooked fruits, but they are usually served with cream. Therefore, when ordering in a Polish restaurant, you need to ask first if these soups can be made vegan. 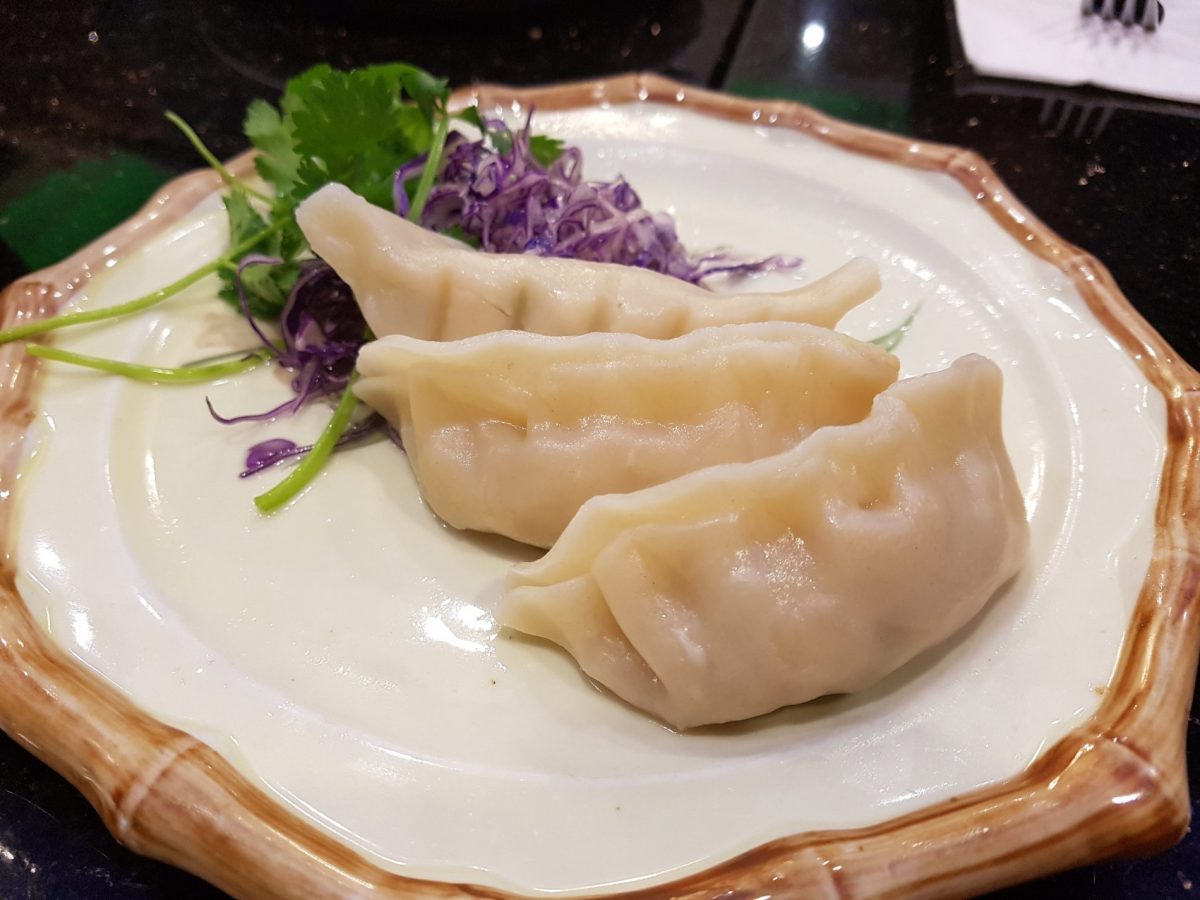 Pierogi is a dish you must try when traveling as a vegan in Poland!

A traditional Polish second course consists of either separate servings of carbs, protein and vegetables or a one-pot dish. The carbohydrates are usually potatoes, kasza (grains) or kluski (dumplings or noodles).

All these are very often vegan in Poland, but it’s best to make sure they are not served with any non-vegan sauces or, in the case of noodles and dumplings, that they don’t contain eggs or dairy.

If you’re not dining in a vegan or a vegan friendly place, ask to omit the protein-based part of the dish, since it will consist of either meat or fish.

The vegetable component can be anything from a hot vegetable side dish to a raw salad. Just see what is on the menu and check if it is vegan.

As for the one pot dishes, the ones most likely to be vegan are placki ziemniaczane (potato pancakes), pierogi (dumplings) and gołąbki (cabbage rolls).

The most popular desserts in Polish cuisine are various types of cakes, but they usually contain dairy and eggs. However, in Poland’s many vegan restaurants you may very well come across vegan variations of these Polish desserts.

If so, I would highly recommend that you try the traditional Polish cakes, such as szarlotka (apple pie), sernik (cheesecake), piernik (pancakes), paczki (doughnuts) and mazurek (Easter shortcake).

Traditional Polish Dishes That Can be Vegan

Veganism is becoming more and more popular in Poland, and you can easily find vegan friendly as well as fully vegan restaurants in most Polish cities. Warsaw, Wroclaw and Krakow in particular have an amazing selection of vegan options.

There are currently over 50 fully vegan eateries in Warsaw listed on HappyCow! However, if you travel in the countryside, it’s very helpful to know about the traditional Polish dishes that happen to be vegan.

Here is a list of common vegan Polish dishes. These are usually either vegan already or can be veganized on request, but it’s always best to check when ordering. 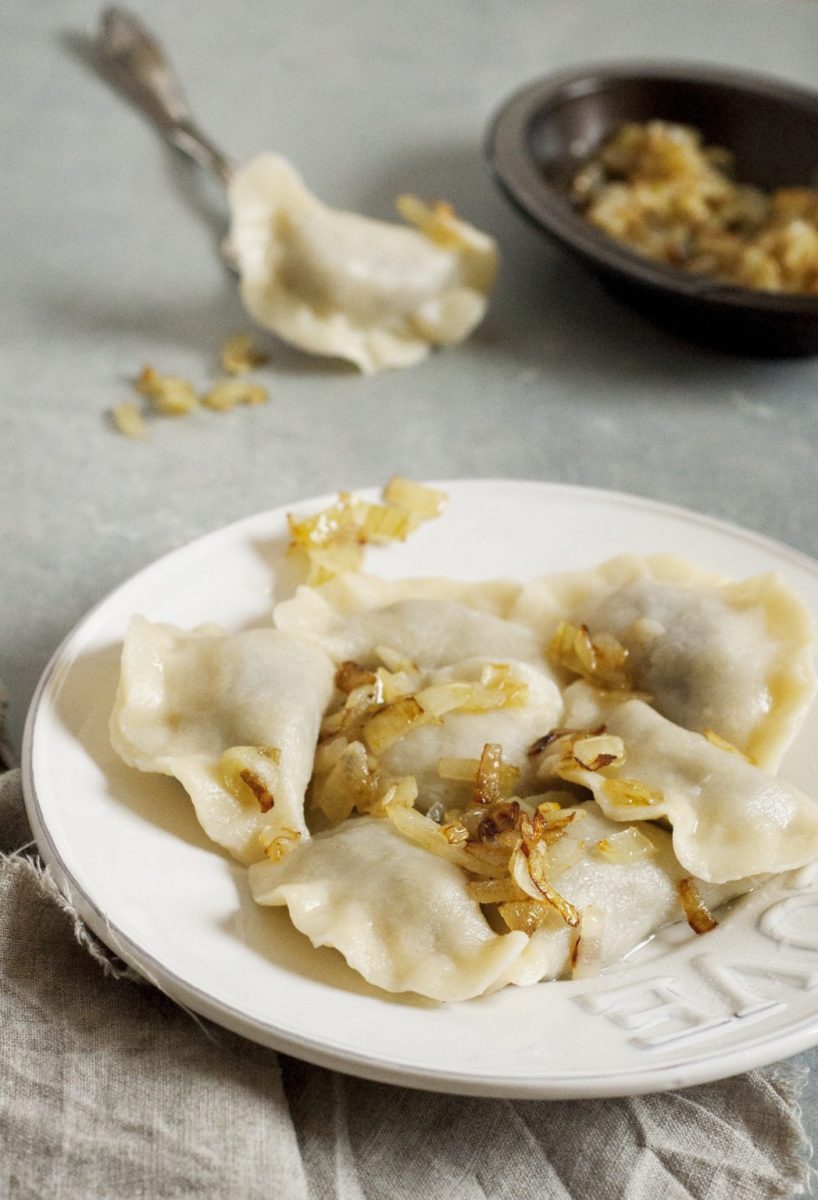 Pierogi are sure to be a hit with anyone traveling as a vegan in Poland.

Pierogi (dumplings) are the most famous of Polish vegan dish and probably the best of them all. They are an absolute must-try when exploring Polish cuisine.

These dumplings are semicircular and come with a variety of savory or sweet fillings, including vegetables, beans, mushrooms or fruits, and can be served either boiled or fried. They are very popular, and you should be able to find them in almost every vegan restaurant.

There is also a good chance you can find some vegan dumplings in a regular bar, restaurant or shop (sold either frozen or fresh). What you need to check, apart from the filling obviously, is the dough.

Traditional Polish pierogi dough is made of flour and water, but sometimes eggs are added. In non-vegan establishments they are also sometimes served with non-vegan sauces, such as cream, sour cream, greaves (diced and fried animal skin) or butter. 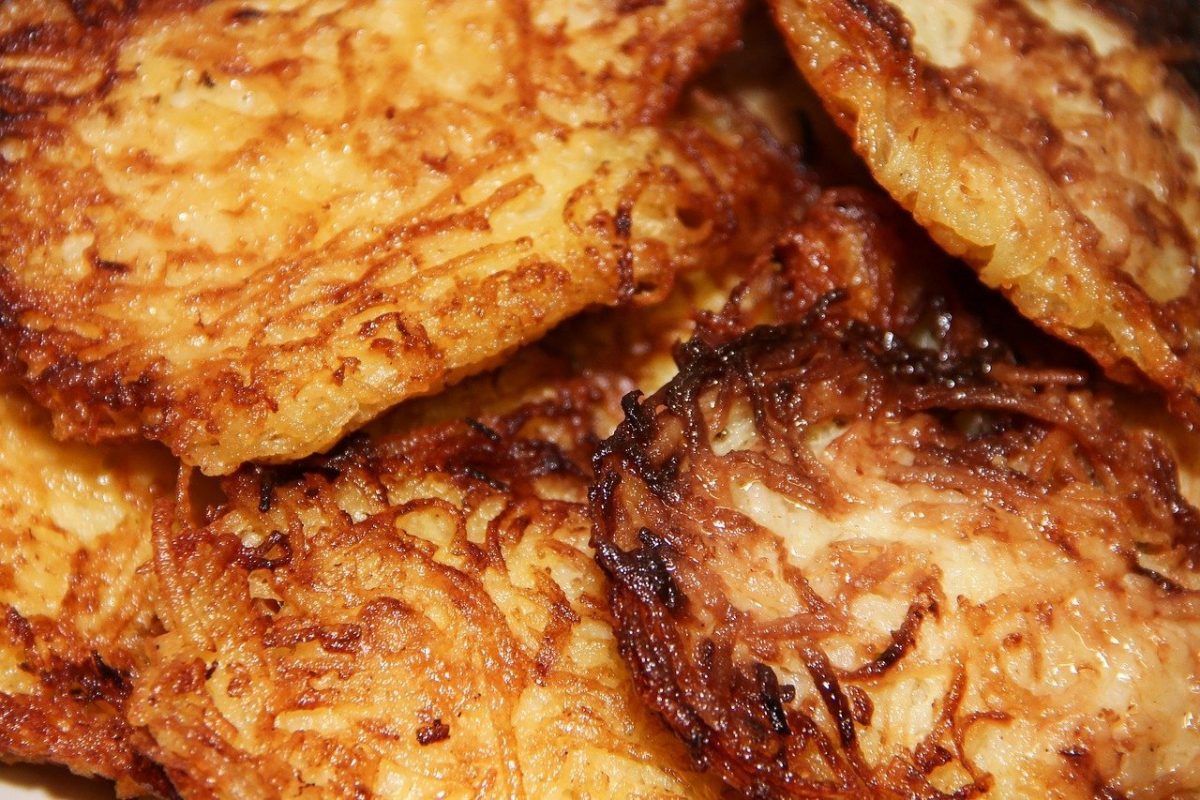 Placki ziemniaczane (potato pancakes) are vegan on their own. Just watch for any animal products they might be served with.

Placki ziemniaczane (potato pancakes) is another Polish dish that is usually vegan. You may have tried them at Ikea, where they’re sold frozen and called “Rosti”. They are also sold frozen in Polish shops, but the fresh ones are much better.

If you buy them in a non-vegan place, you should make sure they don’t contain eggs and also ask if they come with any sauce, since they can be served alone or accompanied with virtually anything from sugar and cream to meat, vegetable or mushroom sauce.

Łazanki is another traditionally vegan Polish one pot dish. It consists of sweet and sour cabbage (sauerkraut), small square-shaped pasta, mushrooms and onions.

Kopytka are yellowish, diamond-shaped noodles made of cooked potatoes and flour. They can be served cooked or fried, either alone or with various sauces. 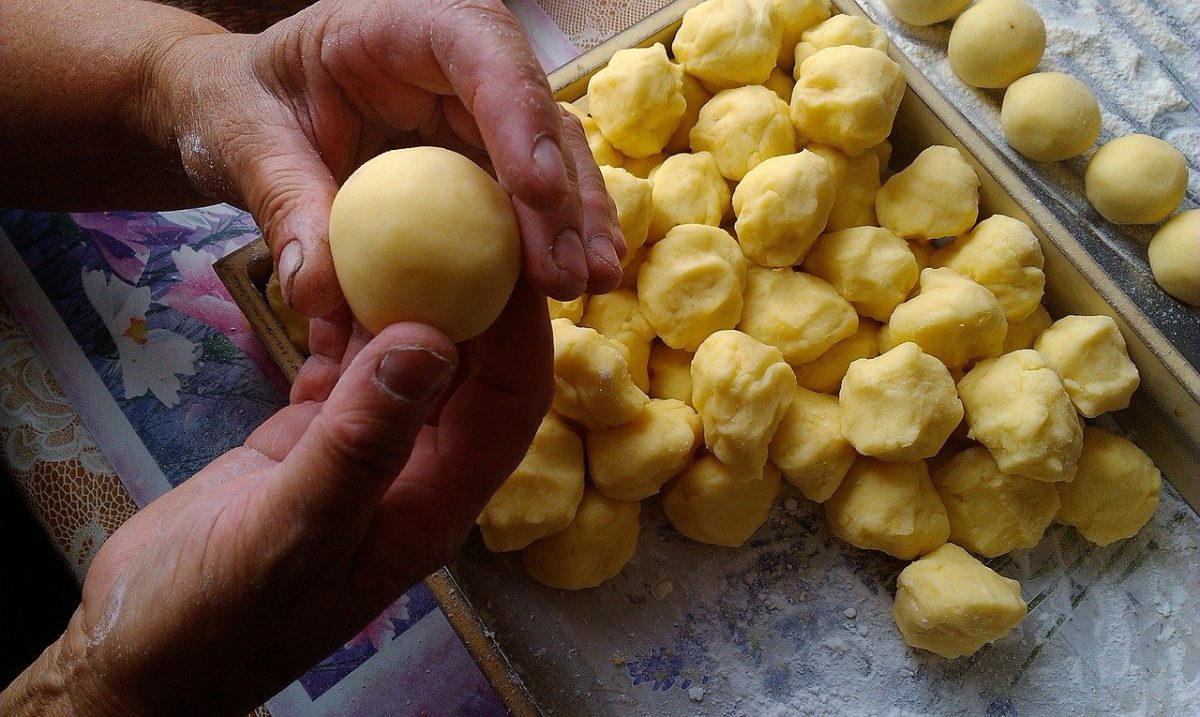 Pyzy is another kind of Polish vegan dumpling made of potatoes. They are round, soft and greyish and do not contain any filling.

Kluski śląskie is yet another kind of Polish traditional vegan noodle that’s originally from the Silesia region, but it’s popular all across the country. They are yellowish and round-shaped with a dent in the middle.

Knedle are a sweet, round kind of dumpling. They are usually stuffed with plums, but sometimes also with other fruits.

Kompot is a thin fruit compote served as a hot or cold drink.

Kisiel is a kind of fruit pudding, which can be served either hot or cold. You just need to make sure it is not served with cream.

Pieczone jabłka (baked apples) are apples baked in the oven with spices, raisins and nuts. To ensure they are fully vegan, just make sure no honey or cream has been added. 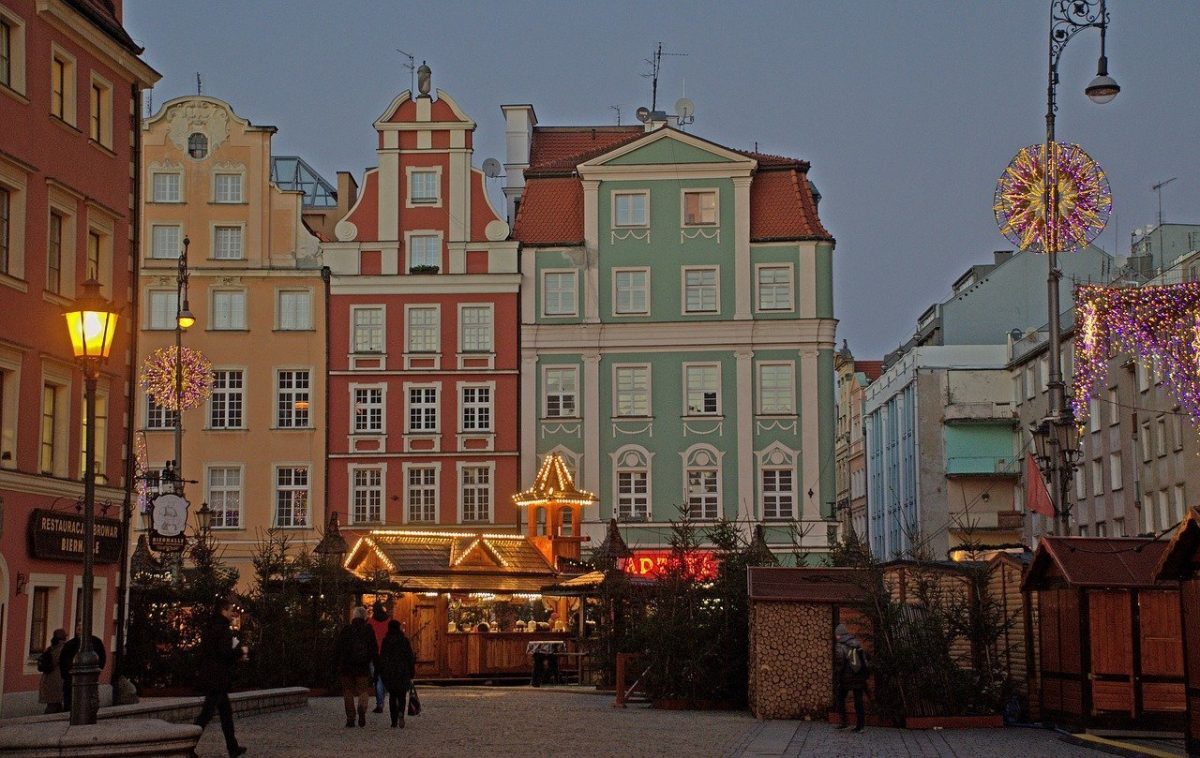 There is also a whole different selection of Polish vegan dishes that are traditionally served on Christmas Eve. The Traditional Christmas Eve dinner is the most celebrated meal in Polish culture. It starts at around 4 pm on December 24th and consists of 12 dishes. It’s a big meal!

Meat is not allowed on Christmas Eve according to the catholic traditions, therefore many of the courses are vegan. Some of them have made their way onto regular Polish menus, so hopefully you will be able to try them outside of the Christmas season. But if you are not in a vegan restaurant or bar, it’s best to make sure they are truly vegan.

Barszcz (borsch) is a clear, red soup based on fermented beetroot juice. There are also some other varieties of borsch, to which beans are added.

Zupa grzybowa is a wild mushroom soup. During the Christmas period, this soup is traditionally made without meat broth.

Uszka is yet another kind of savory dumpling. They are small and stuffed with wild mushrooms and usually served with borsch -- a traditional sour beetroot soup.

Kutia is a sweet, vegan dish made of poppy seeds, nuts, raisins and other dried fruits.

Now that you know about the many plant-based dishes in Polish cuisine, eating vegan in Poland should be a piece of cake. In Polish cities, you will find so many vegan Polish restaurants that you won’t even have time to try them all!

The vegan movement is very strong in Poland and is growing rapidly. Warsaw is number 7 on the HappyCow 10 Top Vegan Friendly Cities in the World list and number 5 on Alternative Travelers’ Top 10 Vegan-Friendly Cities in Europe in 2019 list. And the city of Wroclaw  even has a beautiful memorial to slaughtered animals that has been there since the 1990s!

In rural areas, options will of course be more limited. But if you ask for some of the vegan Poland specialties listed here, you are sure to have a delicious vegan Polish adventure.

Here are some helpful Polish phrases that will come in handy when ordering vegan food: 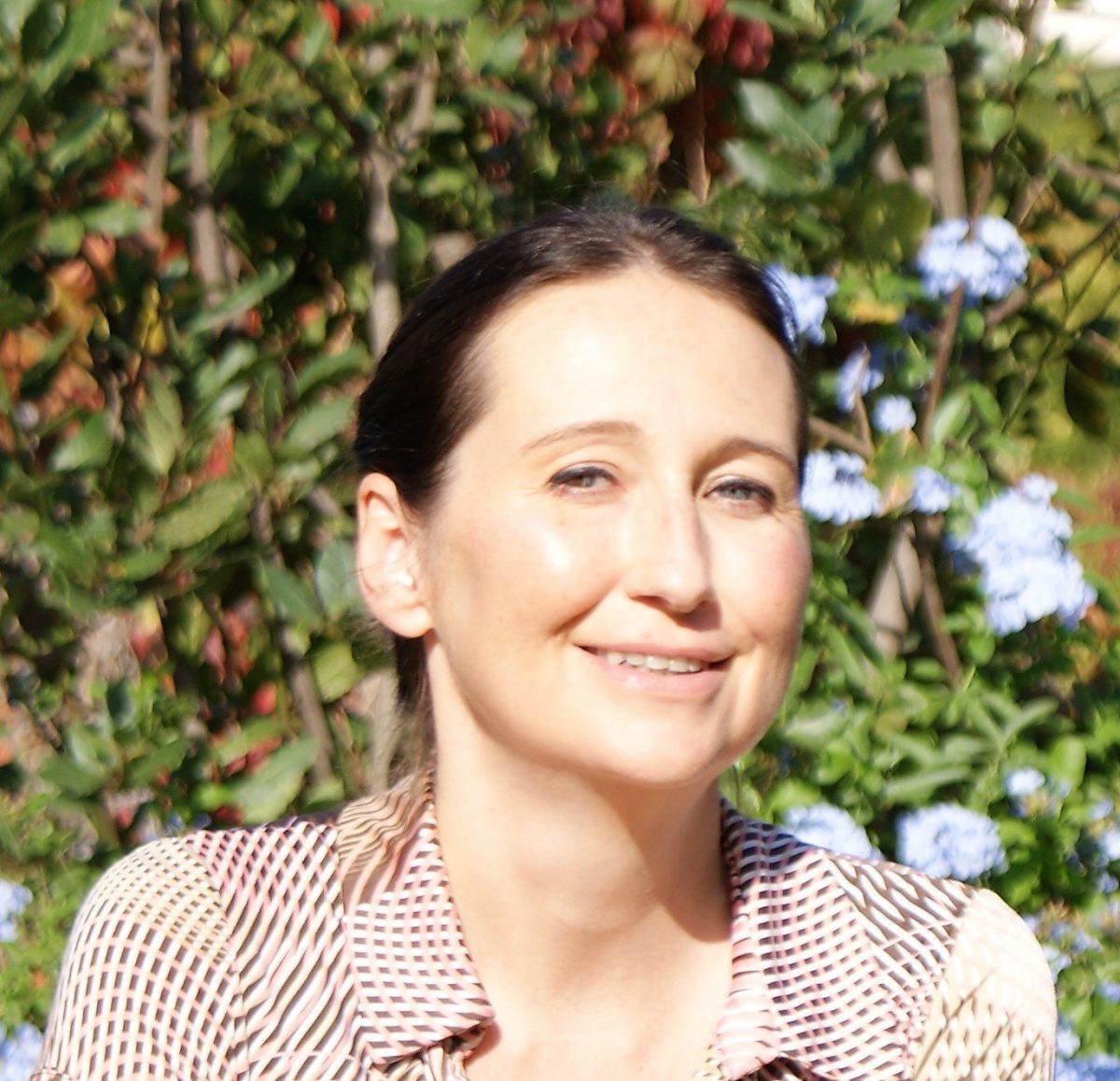 Joanna Draus is a vegan coach, blogger and writer. She’s a mother of three vegan children aged 26, 12 and 12 (yes, vegan twins!) and a Plant-Based Nutrition graduate from eCornell University and the T. Colin Campbell Center for Nutrition Studies.Follow her on Instagram and check out her blog and website, Your Vegan Coach. 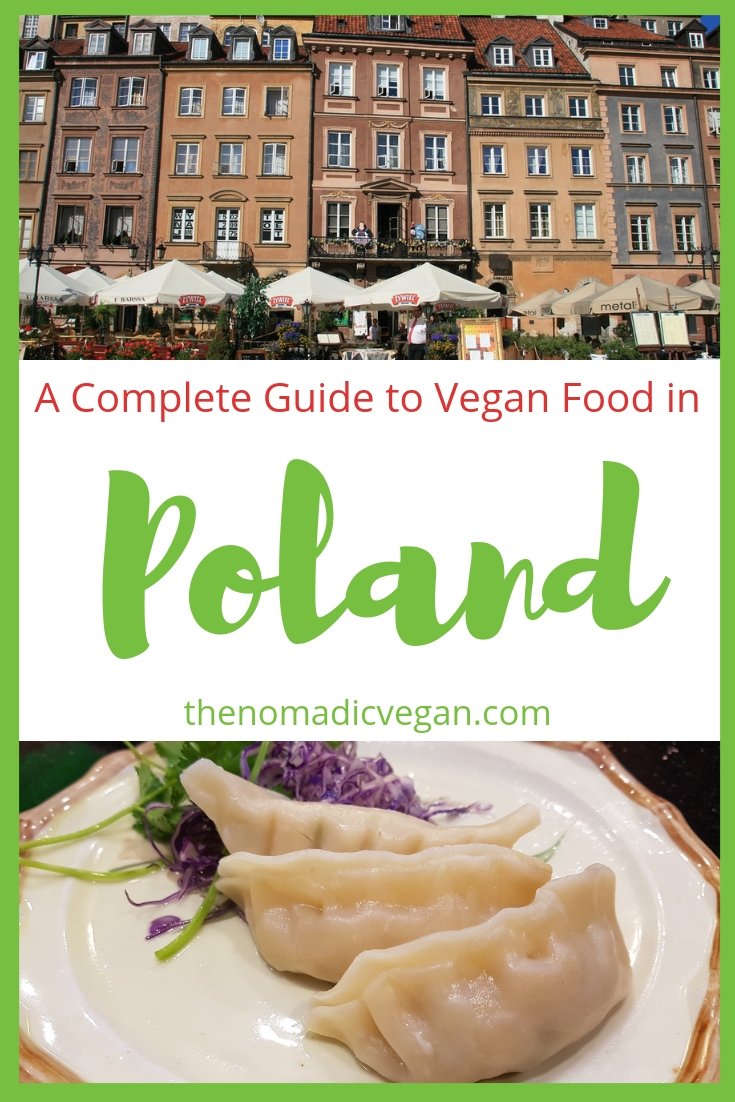