Home Travel Africa An Inside Look at Being Vegan in Rwanda

An Inside Look at Being Vegan in Rwanda 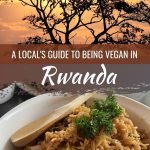 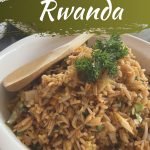 How Easy Is It to Be Vegan in Rwanda?

When I first arrived in Rwanda just over a year ago, I was unsure how I would survive as a vegan living in an African country once again. While I am originally from Guinea in West Africa, I had spent the last 13 years living in China.

Until moving to Rwanda, I had never been a vegan in Africa. I was used to the convenience and ease of eating as a vegan in China, and I wasn’t sure what lay ahead.

However, as it turns out, eating vegan in Rwanda is extremely easy. Africa is the most plant-based continent on earth, with people in some African countries eating little to no meat. Which means that plant-based eating is accessible and affordable here.

Why Plant-Based Eating is Easy in Rwanda

However, the reasons behind this are not ethical ones. The relatively recent economic development of many African countries has meant that meat is still often regarded as a luxury. And it is still much less accessible than in more economically developed countries.

This is due to a lack of investment in the animal agriculture industries and to the persistence of traditional farming methods throughout the continent. But while this is great news for the non-human animals, things are changing.

With some of the most rapidly developing economies on earth, Africa will see a big increase in meat consumption in the near future. We can already see this in South Africa, whose inhabitants consume the most meat per person on the continent – between 60 and 70 kg per year.

According to BBC statistics, Rwandans eat only around 8 kg of meat per person per year, which is relatively little on the global scale. Eating out as a vegan in Rwanda is incredibly easy.

Where to Find Vegan Food in Rwanda

Plant-based options are available at most popular restaurants. In addition, the concept of veganism is much more widely understood than in some European countries (France, I’m talking about you).

In Kigali, entrepreneur Citra Mohammed opened the first vegetarian/vegan restaurant, called Afia Organics. Citra and her team provide healthy plant-based options and encourage Rwandans to consider their health, but also animal rights, as a reason to adopt a vegan lifestyle.

She’s part of a growing number of people in Rwanda that have become vegan and are promoting the lifestyle among locals.

As meat-eating is associated with wealth in many African cultures, including in Rwanda, people often assume that the reason you are not ordering meat or other animal products is because of your budget, not your ethics.

When you do explain the reasons, this can often be met with laughter and the accusation that you are following a white movement. There is little understanding that a plant-based lifestyle is actually closer to African realities than Western lifestyles.

So, while plant-based eating is convenient in Rwanda, the understanding of animal rights and veganism as an ethical philosophy is a pretty new concept.

Animal Welfare and Conservation in Rwanda

While animal welfare for companion animals and farmed animals is a relatively new idea, Rwanda is leading the way in conservation and animal welfare programs for wild animals.

Akagera National Park was founded in 1934, but by 1997, after the Rwandan Genocide, most of the land and animals had been lost to farming and poaching.

The park has now been transformed, with elephant, lion, rhino, leopard, buffalo and giraffe populations all growing. Poaching is almost non-existent in the park.

However, when I was touring the park with my guide, he told me that they now have to track the elephants because of the open border with Tanzania across the Akagera River. Elephants that had crossed the border had come back injured or were sometimes found murdered in Tanzania by poachers.

Now they use helicopters to herd them back whenever they get too close to the border.

There are a number of eco-lodges you can stay at within the park, including Ruzizi Tented Lodge, where I was lucky enough to stay during my last visit.

If you are a vegan traveling to the park, I highly recommend staying here. Not only is it incredibly beautiful, but they also provided some of the best vegan options I have had worldwide, completely transforming their menu to suit our needs. The staff also immediately understood that honey isn’t vegan, which is rare.

Rwanda also has the Nyungwe National Park, where a population of chimpanzees is now thriving. But the true success story for Rwandan animal welfare and conservation has been the country’s ability to revive an almost extinct population of mountain gorillas in the Volcanoes National Park.

While everyone may be familiar with Diane Fossey, her excellent conservation work with gorillas in Rwanda and her subsequent tragic murder, many don’t realize what a success story Rwanda is nowadays when it comes to gorillas.

The country has achieved this success through a form of “extreme” conservation. Not only are the gorillas protected from poachers, but they are also constantly observed and provided with veterinary care by a special team of gorilla veterinary doctors.

In the past, World Vegan Travel has organized vegan trips to Rwanda, with a focus on the gorilla safari experience. Sometimes these are even co-led by vegan author and educator Colleen Patrick Goudreau. They don’t have any Rwanda trips scheduled at the time of this writing, but it’s worth checking their website for any new announcements.

How Tourism Benefits Conservation in Rwanda

In Rwanda, revenue from tourism is channeled into the communities and further conservation programs. Rwanda has proven that these methods are effective. It’s shown that by using humane methods of conservation, and by relying on eco-tourism instead of trophy hunting (like in South Africa, Zimbabwe, Namibia, etc.), populations can recover over time.

When choosing where to have your safari experience, one thing to consider is that many safari parks in Africa allow rich, white tourists to murder endangered animals for a fee. This happens in Southern Africa especially, but also in Rwanda’s neighbors in East Africa, including Uganda and Tanzania.

Rwanda may not have as many savannah animals as other popular safari destinations, but you can rest assured that no trophy hunting is allowed within Akagera Park.

While Rwanda has made massive progress with conservation and the understanding of animal welfare in relation to endangered animals, it’s a different story when it comes to farmed animals.

Meat, and especially dairy, is intrinsically linked with traditional Rwandan culture. While goats are killed for meat, cows are more often raised for their milk, and they have a very important place in Rwandan history and culture. Addressing milk consumption can be seen as disrespecting Rwandan culture.

When travelling throughout the country, you will notice milk bars everywhere. These are small bars/shops that serve only milk to their customers. This is something I haven’t seen anywhere else, and it highlights the strong connection Rwandans have to cows and their milk.

Historically, cattle ownership has been considered a sign of wealth and power in Rwanda. Cows are often given as gifts at weddings or other special occasions.

Giving cows to impoverished families has also been part of a government poverty alleviation program called Gir’inka since 2006.

No other cow holds more importance in Rwandan culture than the Inyambo cow, or royal cow.

These cows are not slaughtered but are used in parades for the king. They are decorated with beads and sung to, they don’t produce that much milk, and they are considered to be a symbol of traditional Rwandan culture.

Industrial Animal Agriculture Is on the Rise in Rwanda

But things are changing. Cows are no longer respected to the same degree that they were in the past. Rwanda is moving away from traditional methods of farming and is investing in modern slaughterhouses. It’s even importing non-native breeds of cows that are more suitable for industrial dairy production.

From July 2016 to June 2017, Rwanda made US$ 22.9 million from beef exports, an increase from US$ 17.6 million the previous year. As investment increases, the number of cows being killed is only going to dramatically increase.

Vegan Education and Outreach in Rwanda

Thankfully, a number of people within the country are trying to raise the profile of veganism. One example is El-Rahim Jaffer, who established the Rwandan Humane Society. A vegan himself, he is encouraging others to adopt the lifestyle.

Prior to the COVID-19 pandemic, he ran the vegan/vegetarian Rwandan group, which met up as often as possible for dinners and discussions. Despite the pandemic preventing these meetups, he is now using his position as owner of

In cooperation with WAG Kigali, the only dog rescue organization in the capital, PETSPLUS is raising awareness about animal welfare and how it can be intrinsically linked with public health. While we have yet to see a massive increase in the number of vegans in Rwanda, there is a growing awareness about many surrounding issues.

Conservation, anti-poaching community initiatives and plant-based eating for health are all important topics here. The success of the vegan movement as an ethical philosophy in Rwanda will depend on the dedication of vegan outreach movements and the funds available to educate.

If you’re planning to visit Rwanda, and especially Kigali, here are my top recommendations on vegan-friendly places to eat in the capital:

Top Restaurants for Vegans in Rwanda

And if you’re planning a trip to any other African countries, check out these general tips on finding vegan food in Africa.

My name is Abdourahamane Ly. I have been vegan for the past five years now and am extremely passionate about animal rights and encouraging more Africans to go vegan. I was born in Guinea in West Africa but spent the last 13 years in China. I am currently in Rwanda spreading the vegan message. You can follow me on Instagram @fulanivegan.
View all posts by Abdourahamane Ly →