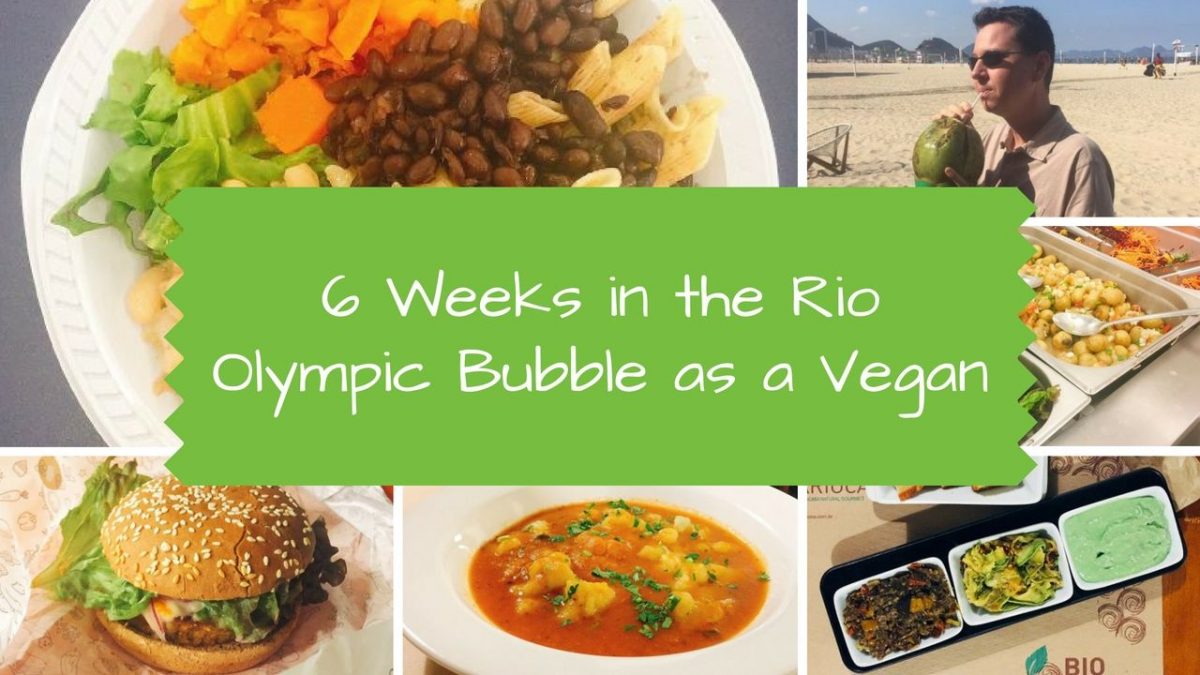 Even though we didn't officially change the name of the blog, The Nomadic Vegan actually morphed into The Nomadic Vegans about nine months ago, when my husband Nick became vegan himself. Yay! Nick has contributed quite a bit to the success of The Nomadic Vegan behind the scenes, but he's never been one to bask in the limelight.

In fact, he likes to refer to himself as "The Quiet Vegan".Well, today The Quiet Vegan is speaking out! If you follow me on Facebook or Instagram (and if you don't, come join the party!), you might know that for the past five weeks Nick has been in Rio de Janeiro, Brazil, working at the Olympic Games. And now, here he is to give you a behind-the-scenes look at what it's like to be stuck in the "Olympic Bubble" as a vegan. Please welcome our very special guest blogger, The Quiet Vegan!

Another Olympic Games has come and gone and I was fortunate enough to be given the opportunity to go to Brazil and work at the Games for the Olympic News Service (ONS).

I had a great assignment covering men’s basketball, I got to experience the wonders of Rio de Janeiro for the first time, and I had fun using some of my elementary Brazilian Portuguese that had laid dormant in the back of my mind for the last 12 years once I switched to other languages. 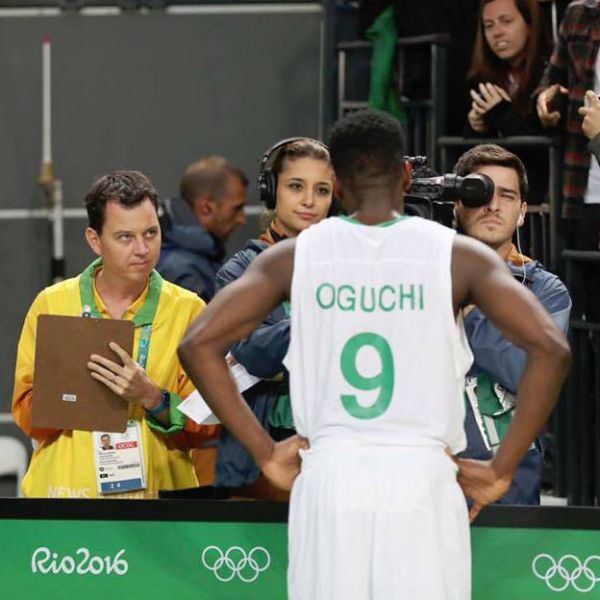 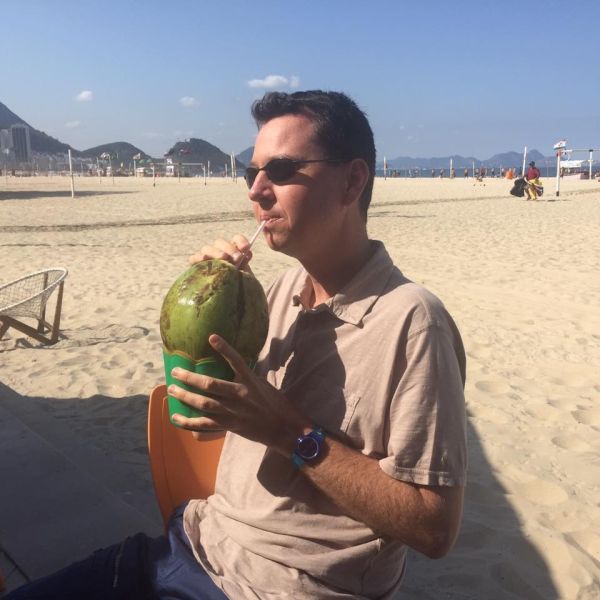 This time, however, was a bit different, as it was my first Olympics as a vegan. The realities of the Olympic bubble, the nature of Brazilian cuisine and the social pressures involved meant that I had far less control over what I ate than I do at home or on our weekend jaunts around Europe. So, what did I eat for six weeks?

During my time in Rio, I ate about 80 per cent of my meals in the workforce break areas in the two venues I worked at: the Main Press Centre and Carioca Arena 1.

Normally, workforce food is not anything to write home - or blog - about. My experience in 16 years of working at these events has taught me that workforce food is generally pretty bland, regardless of whether you’re in a country that’s famous for its cuisine (e.g. Italy for Torino 2006 or China for Beijing 2008), or one that's not (e.g. Russia for Sochi 2014).

Additionally, at two recent non-Olympic events that I worked at - the Glasgow 2014 Commonwealth Games and the Baku 2015 European Games - the trend was to move away from cooked meals for workforce and towards sandwich-based packed meals, which gives you less choice and essentially no vegan options.

All of this meant that approaching my first Games as a vegan in Rio, I had no culinary expectations at all. Honestly, I was just hoping to get by and I was OK with that.

I figured my best case scenario for workforce food was rice, beans and fruit, and the worst case scenario was simply fruit - possibly supplemented by muesli bars if I could find my way out of the bubble and into a supermarket at some point during my 14-hour working days.

Luckily, to my complete surprise, workforce food in Rio consisted of an exceptional buffet and I filled a plate with plentiful vegan options twice a day, day after day and week after week. 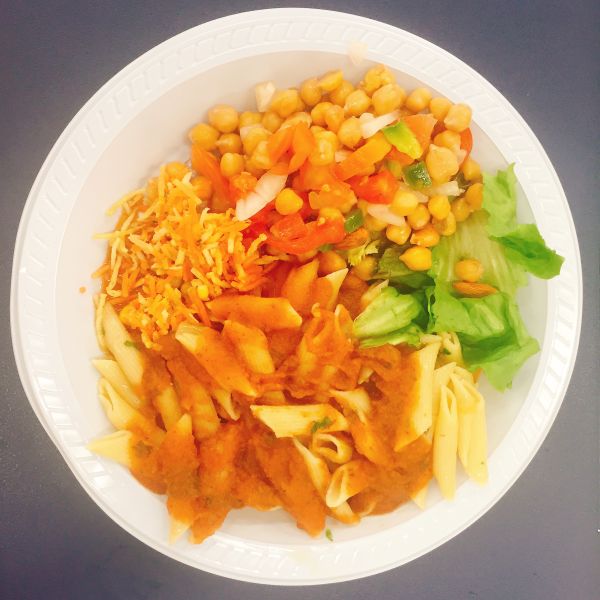 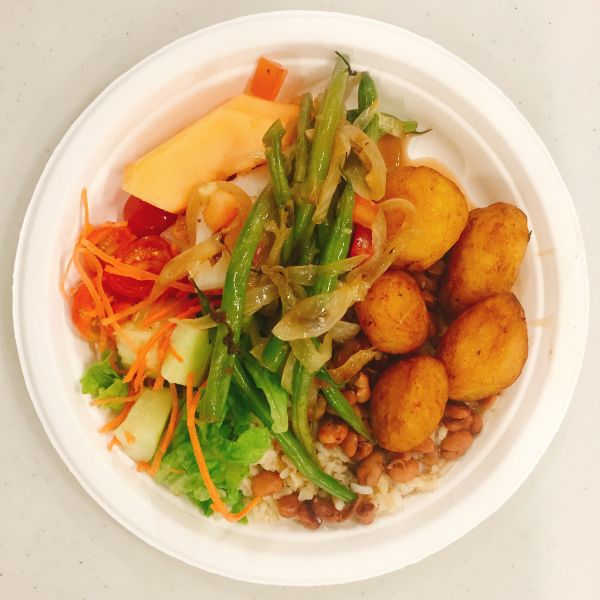 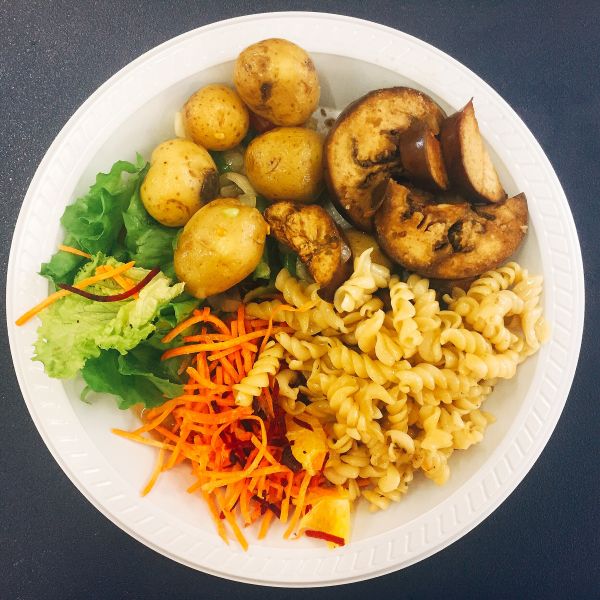 A sample of vegan workforce food at Rio 2016.

It’s true that rice and beans remained a staple for me, as this was offered at every single meal. But I was perfectly fine with that and I also had plenty of salads, veggies, pasta, soup and fruit.

The salads were constantly changing and fortunately drew from non-Brazilian cuisine to give them variety and flavour. Some weren’t vegan, of course (and nothing was really marked, so I had to do some guesswork and ask when I wasn’t sure), but others were and included ingredients such as couscous, chickpeas, black-eyed peas, carrots and other goodies. 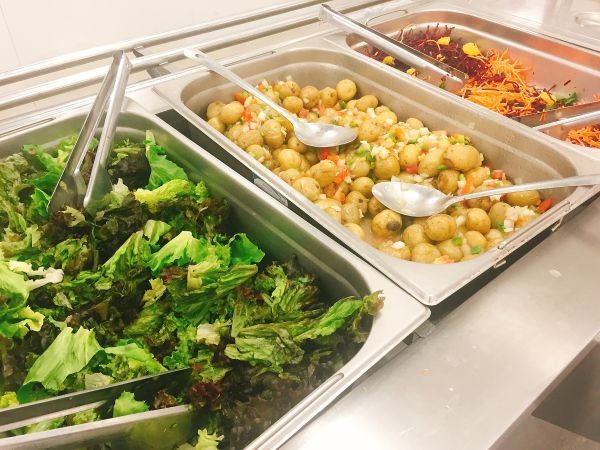 It was the first time at an event that I ate healthy food, didn’t feel bloated afterwards and didn’t put on weight. Beyond eating vegan food, another healthy choice that no doubt helped was drinking water instead of Coke at every workforce meal. I stopped drinking soft drinks about six months ago and was not even tempted by free Coke in Rio, slightly surprising myself.

Because of the nature of my work, getting out of the bubble and going to vegetarian or vegan restaurants in Rio proved difficult. During the pre-Games phase, though, there were a few opportunities to explore Rio and its cuisine.

When I ate at standard restaurants, I tended to order basic dishes like spaghetti with tomato sauce (molho de tomate, often with a huge amount of garlic piled on) or vegetarian pizzas without cheese. These were nothing special but allowed me to go to group dinners and enjoy the social aspect of the Games.

Want to explore Brazil beyond Rio de Janeiro? Check out the surprising number of things to do in São Paulo! Oh yeah, and there's some amazing vegan food there too.

Of the few vegetarian places I managed to get to, my favourite by far was Bio Carioca in Copacabana. It’s an organic vegetarian restaurant and I was grateful that one of my good friends suggested it when we were nearby, and a small group of us went there essentially for my benefit.

All vegan options are clearly labelled and most of the menu changes each day of the week, with some dishes available all the time. I managed to sneak back by myself twice more in the coming days and it was delicious every time. 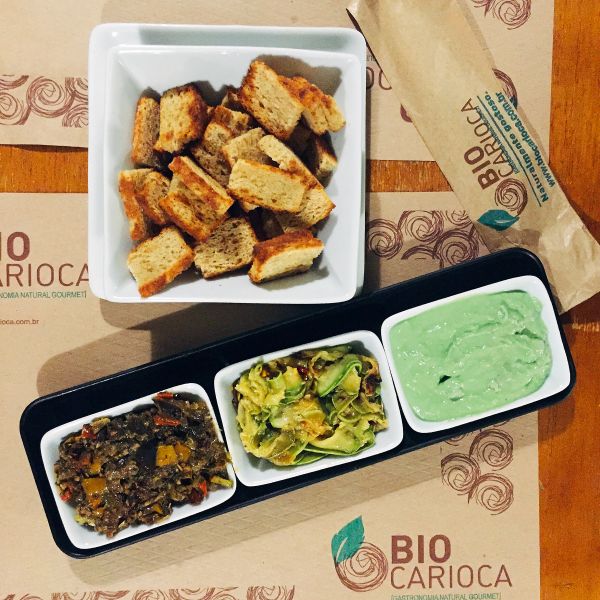 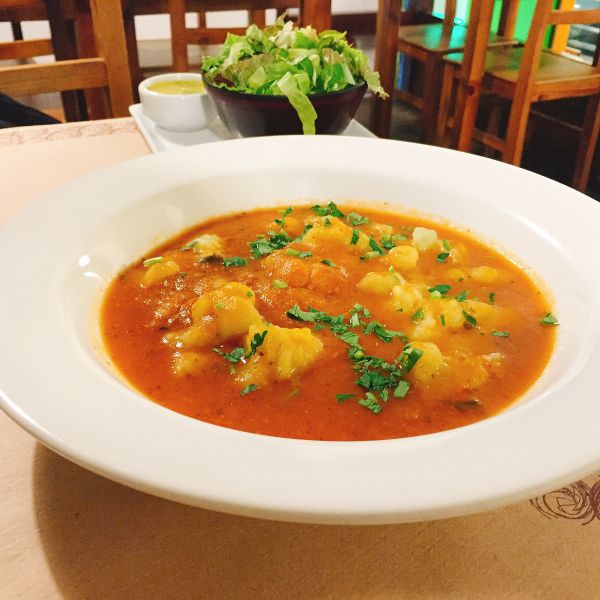 I also went to Rio Vegano, near Bio Carioca in Copacabana, which does a roaring lunchtime takeaway and delivery trade [UPDATE 4 August 2018: Rio Vegan has permanently closed]. There are a couple of small tables inside, so I went in and enjoyed a vegan feijoada, which was essentially beans and rice with tempeh instead of the usual meat.

The final vegetarian place I went to was Hare Burger, a fast-food chain with several locations around Rio that offers a vegan burger [UPDATE December 2019: Sadly, Hare Burger has also closed. But there are lots of new vegan places in Rio these days! Check HappyCow for the latest listings] . While this certainly wasn’t the healthiest or most delicious meal I had in Rio, it’s a great option if you feel like a fast food fix. 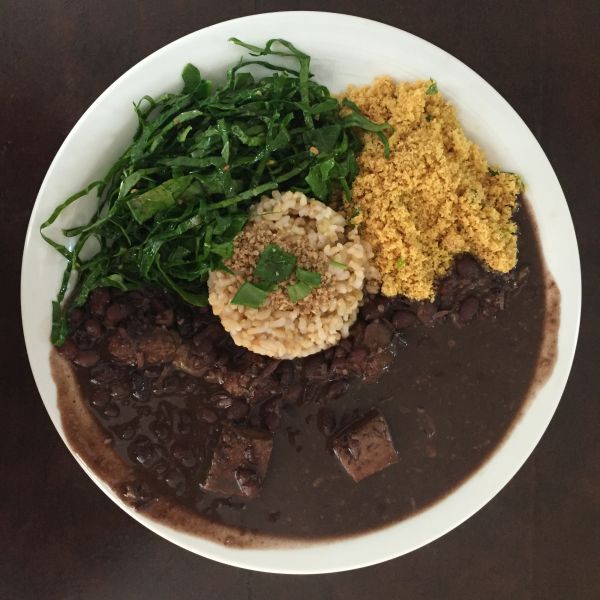 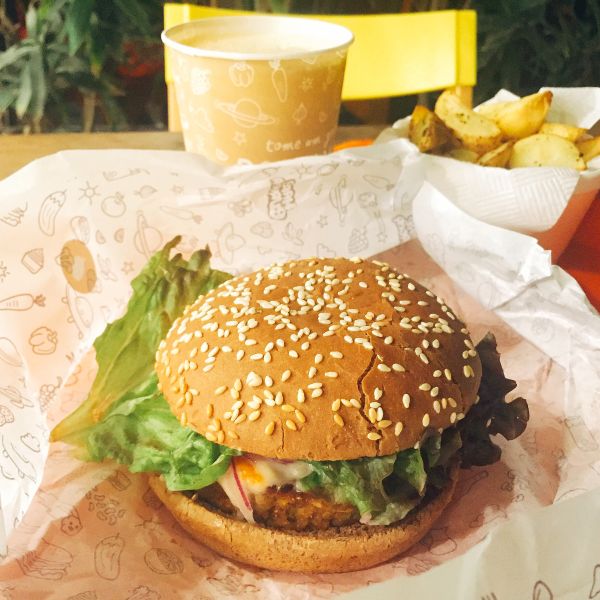 All in all, I couldn’t have been happier with the food experience I had in Rio given the circumstances. It just goes to show that surviving and even thriving as a vegan is always possible, even in the most unlikely of situations. 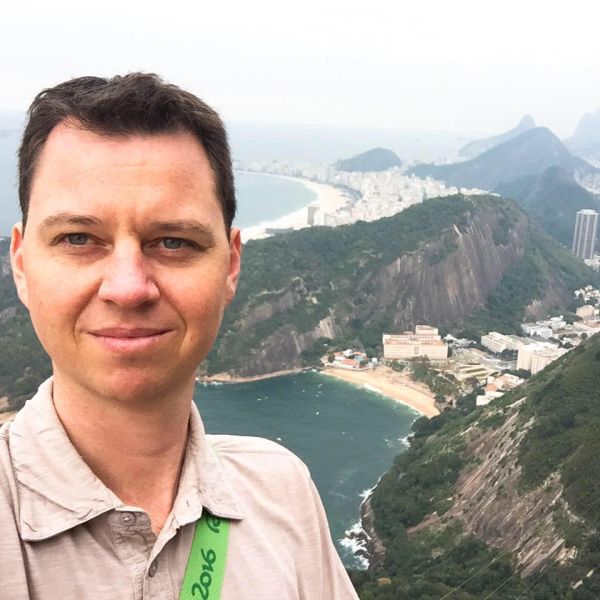 Nick is Wendy’s husband. He studied journalism at university and has covered eight summer and winter Olympic Games for the Olympic News Service as a reporter, sub-editor, news supervisor and project manager.