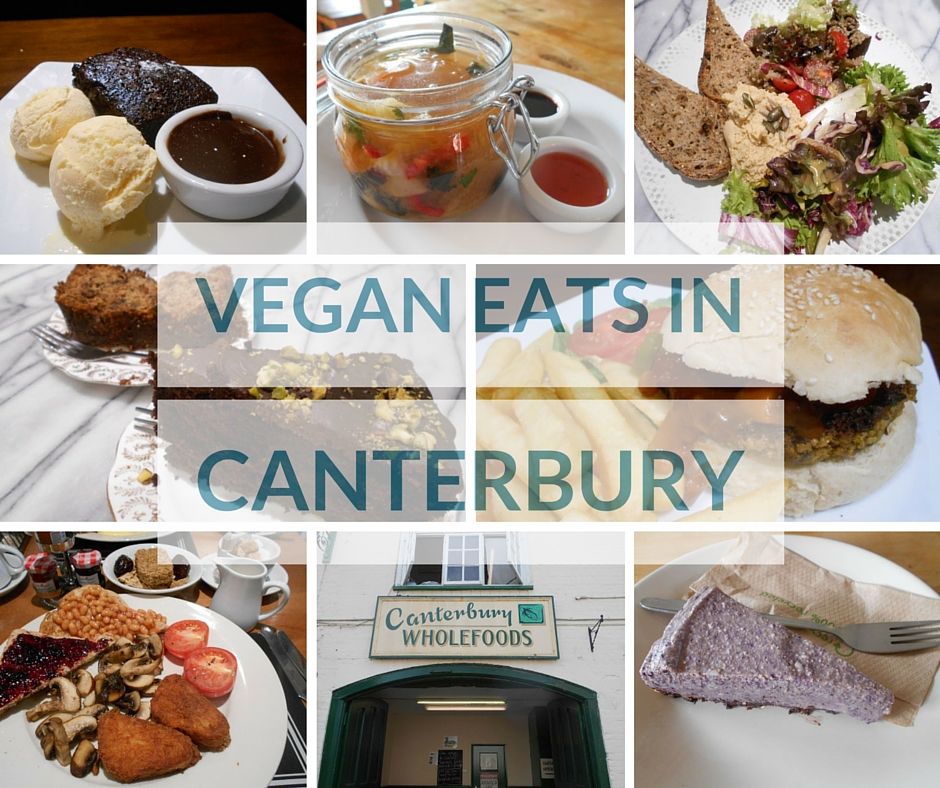 My first experience as a vegan traveler in the UK was unfortunately not very positive. It was an encounter with a server in a pub who seemed to have a real problem with vegans and told me the only thing he could offer me was a carrot.

Well, that experience took place in tiny villages and hamlets in the Cotswolds, and I suspected then that more urban locations in England would have a lot more to offer vegan diners. My weekend in Canterbury most definitely confirmed those suspicions.

Canterbury barely even qualifies as urban – it’s population is a mere 55,000, give or take a few. Nevertheless, this diminutive city is the very epitome of the term “vegan-friendly”.

I felt as if I had stepped into the future, into an age where veganism had become fully integrated into mainstream culture, was understood by everyone, and was no longer viewed as something only for hippies and extremists.

Perhaps you live in a place where this future has already become reality, but for me, Canterbury was my first real glimpse of what a world where vegan is normal might look like. I have to say, it was pretty awesome.

And if you're wondering what else there is to do near Canterbury, check out these 23 awesome ways to spend a day out in Kent. 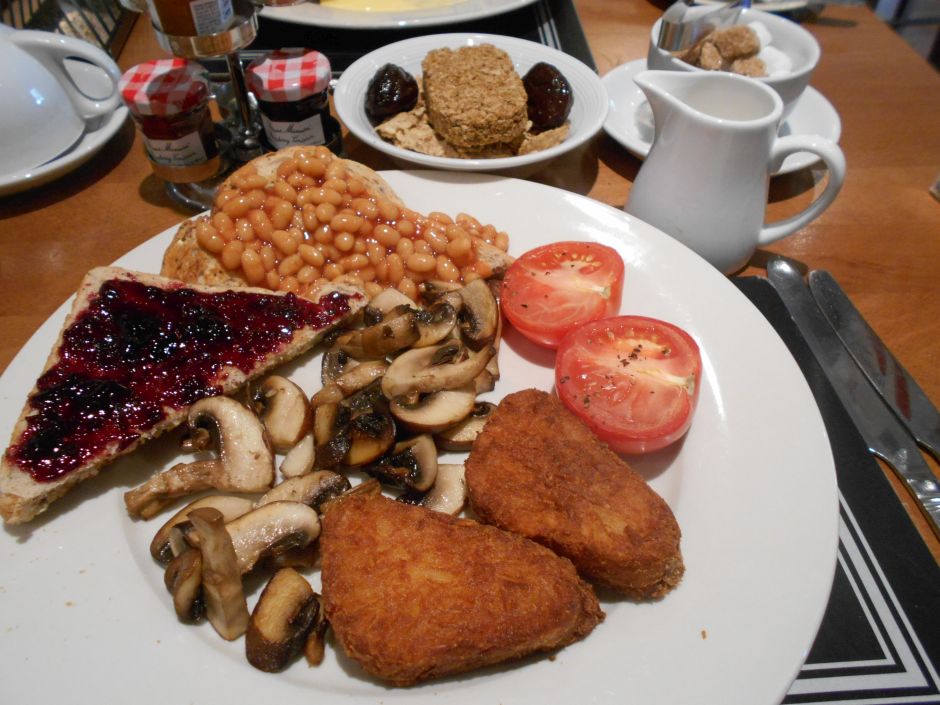 We stayed in this charming hotel above a 16th-century pub that served a full English breakfast, included in the price of the room.

Nick affectionately referred to mine as the "half English breakfast", since half of the typical ingredients were missing (namely the bacon, sausage and eggs), but honestly, it was the largest breakfast I've had in I can't remember when.

With advance notice, they were happy to provide soy or almond milk in place of cow's milk, so on top of all the hot items I also had a bowl of cereal with fruit.

This could have easily kept me full until late afternoon, but with so many great vegan dining options around town to check out, I had to find room somewhere. Ah, the sacrifices I make. 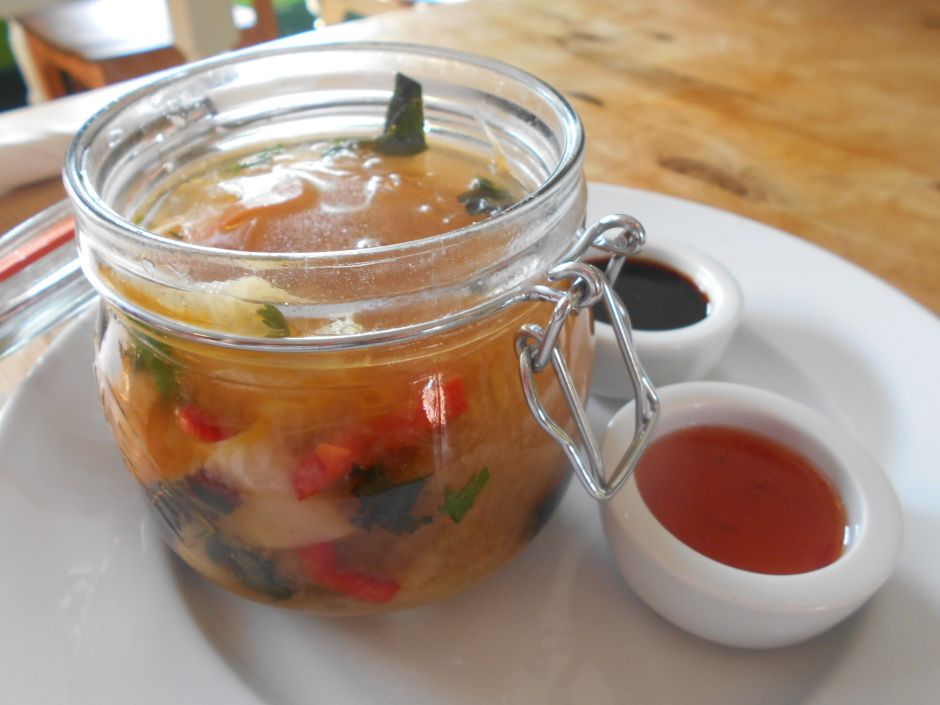 The name "Veg Box" refers to the boxes of vegetables that can be purchased directly from local farmers - what is known in the United States as a CSA (community-supported agriculture) box.

Since the restaurant uses a similar kind of system to source its produce, the menu changes often depending on what’s available/in season, and many of the options are things like Buddha bowls and snack platters that can be improvised with different ingredients.

Since I wanted to be sure to save room for dessert, I went with one of the lighter options – Posh Pot Noodles. This is a bowl (actually a glass jar) of clear rice noodles in miso broth with a mix of fresh vegetables. It comes with soy sauce and sweet chili sauce on the side, so you can season it yourself as you prefer.

There were a number of vegan desserts the day we were there, including no less than three different types of raw cheesecake. I chose a berry one, which had obviously been made with coconut butter because it tasted quite strongly of coconut.

Now, to my tastebuds coconut butter is the nectar of the gods, so I thought this dessert was delicious, but it wasn’t all that much like a traditional cheesecake in taste or texture. 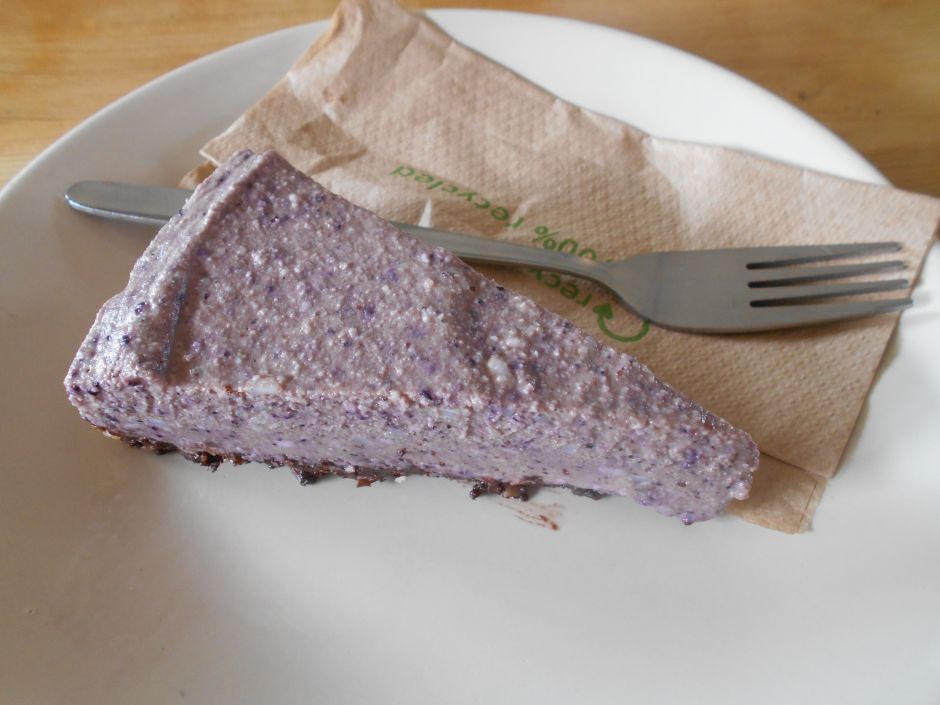 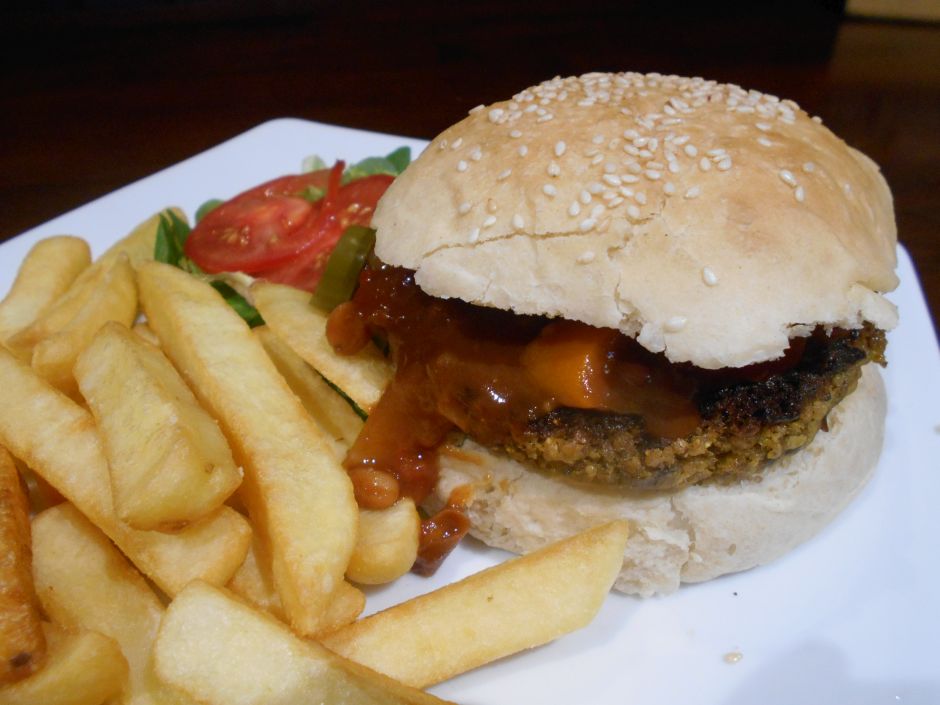 If you’re looking for healthy, clean eating in a friendly environment, then definitely head to Veg Box Café. If, on the other hand, you want to indulge in greasy, decadent pub food washed down with a tall glass of ale (or cider if you’re like me and think beer tastes like piss), then Lady Luck is your friend.

This is most definitely not an organic café above a health food store. It calls itself “Canterbury’s Rock ‘n’ Roll Bar” and is a grungy pub where the familiar base line of “Head Like a Hole” thumps through the speakers, the barmaids sport nose rings and black lipstick, and the patrons while the night away by explaining the hidden symbolism behind their latest tattoos.

It also doubles as a live music venue and hosts bands with names like “Lords of Lonesome” and “UK Vomit”. My 21-year-old self would have felt oh, so at home here.

While there is plenty of meat on the menu, Lady Luck is surprisingly vegan friendly. Vegetarian, gluten-free and vegan options are all clearly marked, and the vegan choices include bangers and mash, a veggie chili dog, mushroom jambalaya and a couple of burgers.

Nick and I both chose the veggie chili burger, which came with a spiced red bean patty and was loaded with chili, jalapeños and hot sauce, served with a token side salad and thick, crispy fries chips. It was a-MAZ-ing.

The burger alone would have been enough to make my night (heck, even just the fries, I mean chips, would have done that), but I just about fell out of the booth when I saw that there was a vegan chocolate brownie on the menu, served with chocolate sauce and dairy-free ice cream. Oooooh yessssss. 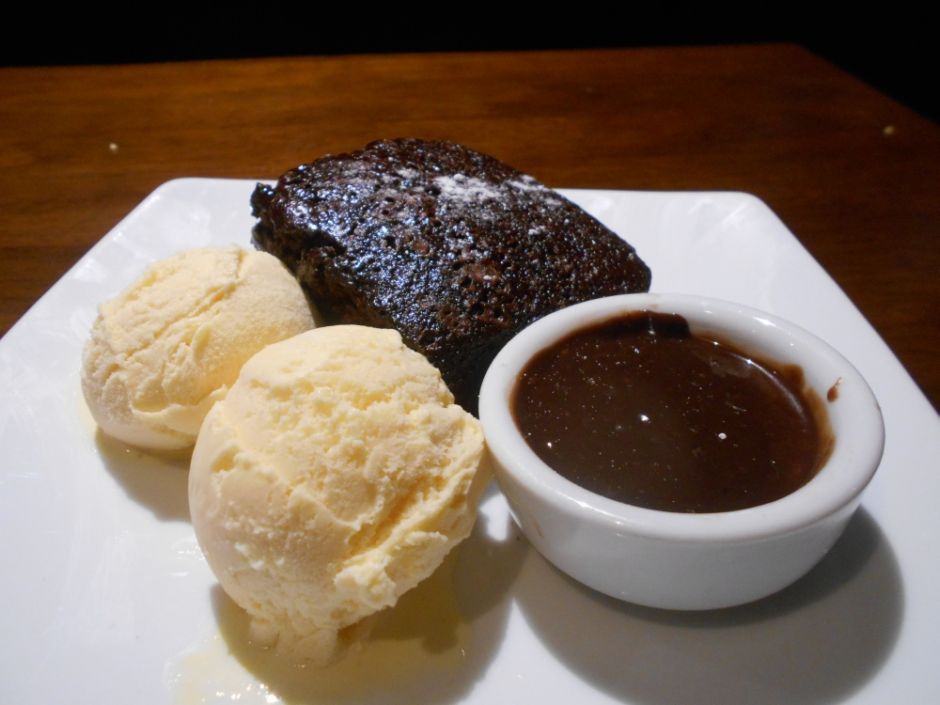 And the chocolate sauce? It’s possible I mopped it up with my finger and licked off every last drop. Who’s going to judge me, the guy with the solar system tattooed on his forearm? 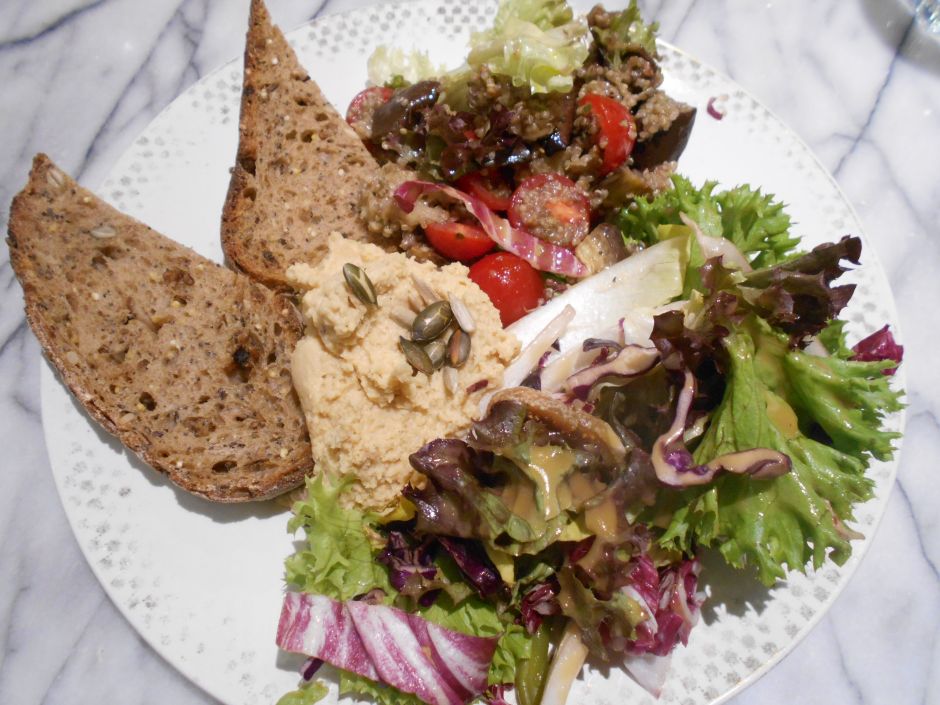 Much like the Veg Box Café, this cozy place on the main drag features salads and soups made fresh with seasonal ingredients, and none of their dishes contain refined sugar or refined flour. While Kitch does serve meat, this seems to be more of an afterthought than a main feature of the menu.

Their daily soup is always vegan, as are the two salads, Superfood Salad and Rainbow Salad, whose ingredients vary depending on seasonal availability. While meat eaters can pay extra to top these salads with chicken or salmon, they are made to stand on their own, and they do so beautifully and deliciously.

I chose the Grazing Platter, which includes smaller servings of both salads as well as a dollop of hummus and two slices of wholegrain bread. It was as satisfying as it was nourishing.

And yes, as I’d already come to expect in Canterbury, the staff at Kitch were experts at making delicious vegan desserts. On the day we visited there were as many as four to choose from!

Nick chose the date and pumpkin seed banana bread, while I eventually settled on a much-too-large slice of chocolate pistachio cake. It was moist, fluffy and pretty much perfect in every way. 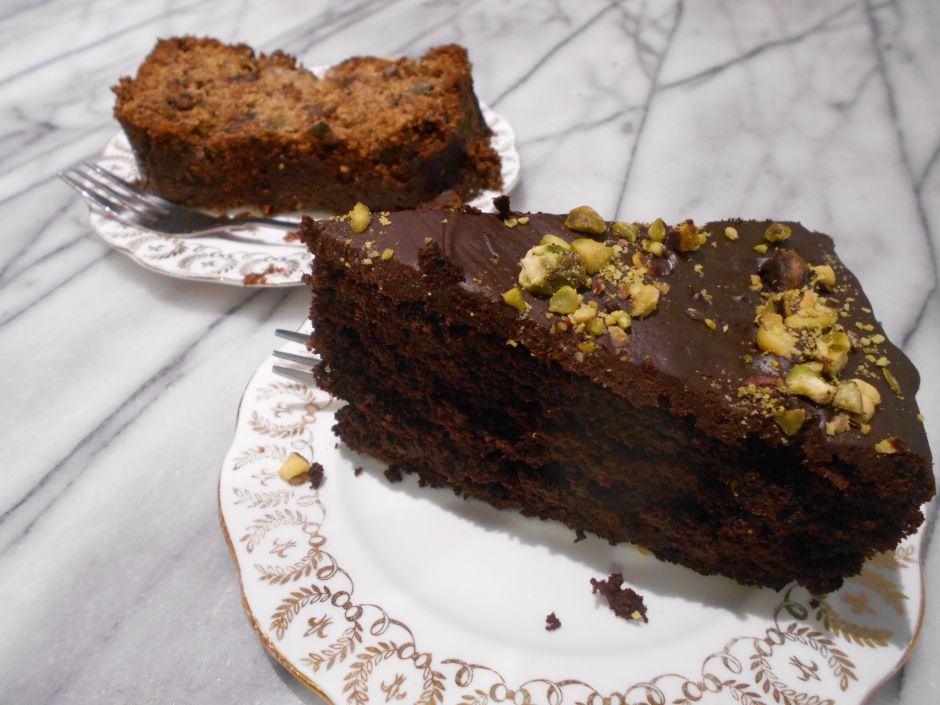 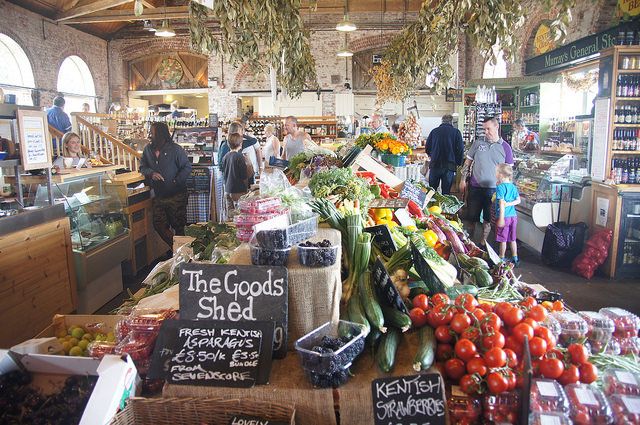 Fresh Produce at The Goods Shed

The Goods Shed is just that – an old warehouse next to the train station that has been turned into a hip farmer’s market with an attached restaurant.

The market was very colourful and was fun to wander around, though apart from all the fresh fruits and vegetables there weren’t as many vegan options as I had hoped.

For a market with ready-made vegan food, you can't beat Camden Market in London.

The listing on Happy Cow had mentioned a raw food stall called the Living Larder, but apparently this no longer exists. There was a stall called Whitstable Larder that did advertise vegetarian, vegan and gluten-free foods, but on the day I visited they didn’t have anything vegan apart from a couple of salads.

Finally, there is the restaurant on a raised platform overlooking the market, which had received a couple of rave reviews on Happy Cow for its “vegetarian platter”.

According to the reviewers, the platter changes seasonally and includes a huge variety of different small dishes, all inspired by British seasonal cooking.

All that was offered to me, however, was a plate of grilled mixed vegetables with a soft-boiled egg and pesto. As I suspected, the pesto was not vegan (nor was the egg, of course), though the waitress said they could serve it with something else instead.

Perhaps I would have been pleasantly surprised had I stuck around, but 14 pounds seemed a bit steep for grilled vegetables, so I decided to head elsewhere.

Other places in Canterbury recommended by vegan locals include:

A Middle Eastern restaurant with plenty of clearly marked vegetarian options, many of which are vegan.

Offers a wide variety of fillings for flatbreads, baguettes, salads and jacket potatoes. You design your own, so there's plenty of flexibility. They also offer a daily soup and hot meal that are vegan.