Seville hosts the most celebrated Semana Santa processions in Spain. The truth is that similar processions take place in towns and villages all over Spain.

But the ones in Seville are justly famous for their elaborate costumes, huge numbers of participating cofradías (brotherhoods) and general religious fervour.

While I’m not really a fan of big crowds, it was a wonderful sight to see, and we were able to get much closer to the action than I had ever imagined we would.

If you’ve never seen images of these processions before, don’t get freaked out by the photos below. The cofradías have been rockin’ the pointy hoods since the 14th century – long before the Ku Klux Klan even thought about burning their first cross. 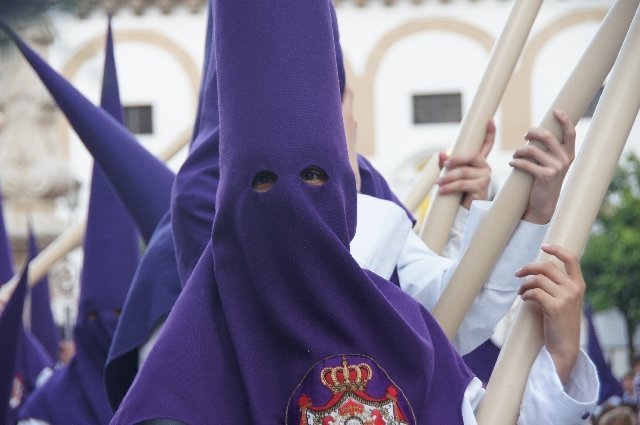 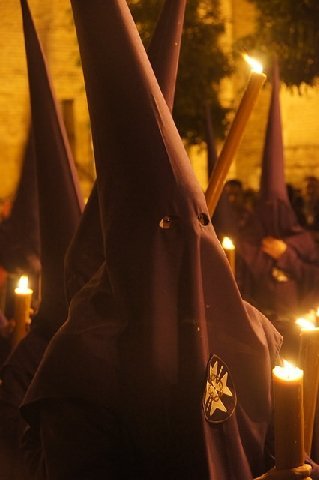 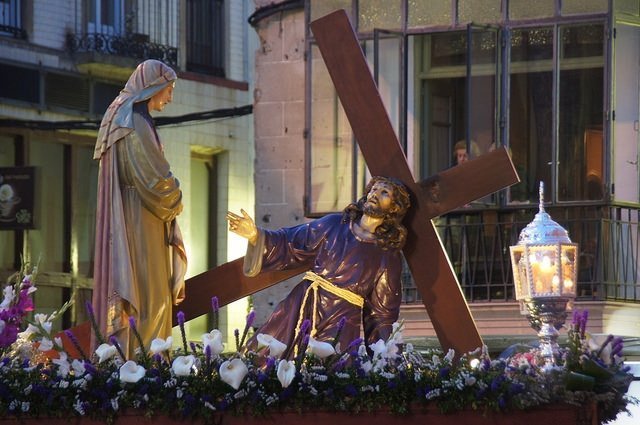 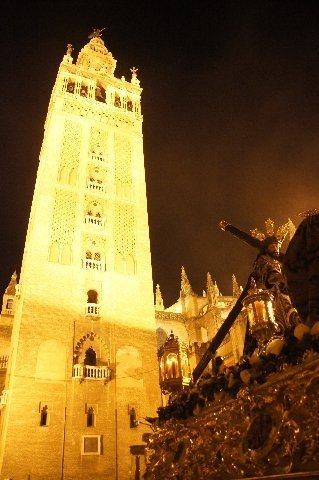 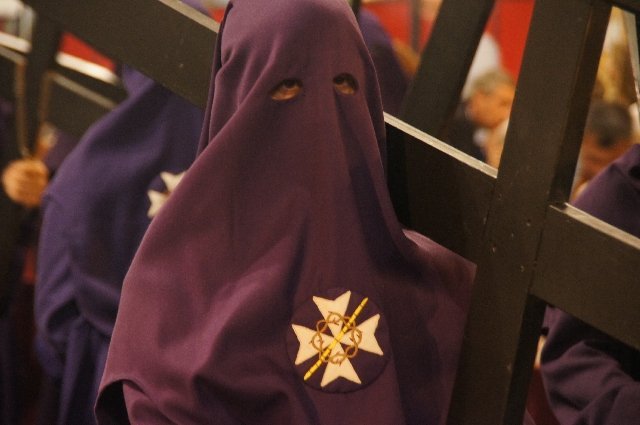 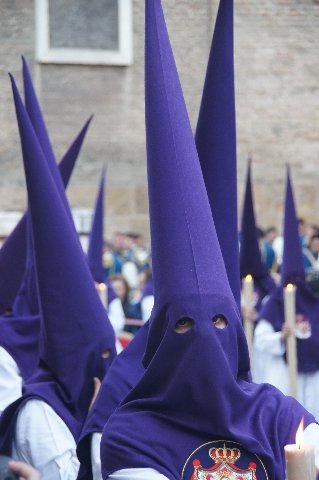 A quick word of advice: if you come to Seville during Semana Santa, just embrace the Semana Santa experience and forget about trying to see the usual tourist sights of the city. Some will be closed, and the crowds will make it difficult to move around.

If you come here at any other time of year, though, here’s a three-day itinerary for Seville that will guide you to the best spots.

In addition to the Semana Santa celebrations, I was also really looking forward to trying out the vegan and vegetarian establishments in Seville. Our bus wasn’t due to arrive there until 4 p.m., though, so I knew we would be cutting it close if we hoped to squeeze in an afternoon meal before the restaurants closed.

As soon as we arrived we made a mad dash for Gaia Bar Ecológico – a vegetarian restaurant very close to the Plaza de Armas bus station where we’d been dropped off – but unfortunately it had closed just a few minutes earlier.

Famished, we then began wandering nearby streets looking for anything that might be open. As it happened, the neighborhood we were wandering in was very close to Seville’s bullfighting ring, which explains why the walls of the few open places we came across were plastered with dead bulls’  heads, photographs of matadores and other bullfighting memorabilia.

While these places did have a few vegan options, I really didn’t want to eat my lunch surrounded by reminders of such needless cruelty and suffering, nor did I want to give my money to establishments that glorified the practice. 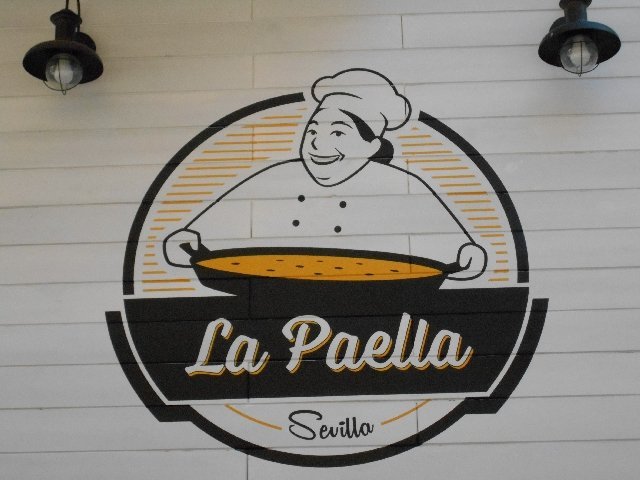 As a last-ditch effort, we followed a sign down a side street to a place called La Paella, hoping that they might offer a vegetarian paella de verduras.

As it happens, they often do serve this naturally vegan version of paella, and in fact they had had one on offer earlier that day, but by the time we arrived there were only two types of paella left, both of which contained meat.

The staff were very friendly and understanding, however, and they really tried their damnedest to find a way to accommodate me.

The girl behind the counter assured me that the stock used to cook the paella was vegetable stock, and one of the cooks offered to take out the pieces of meat and serve me a plate with just the rice.

Someone else came across a tomato in the kitchen and asked if they could chop that up for me. Before I knew it, I was sitting down to a lovely light meal of tomate aliñado (tomato slices with salt, garlic and olive oil) and a small, tapa-sized portion of seasoned rice.

A few large beans had also magically appeared, adding a nice bit of greenery to the paella. 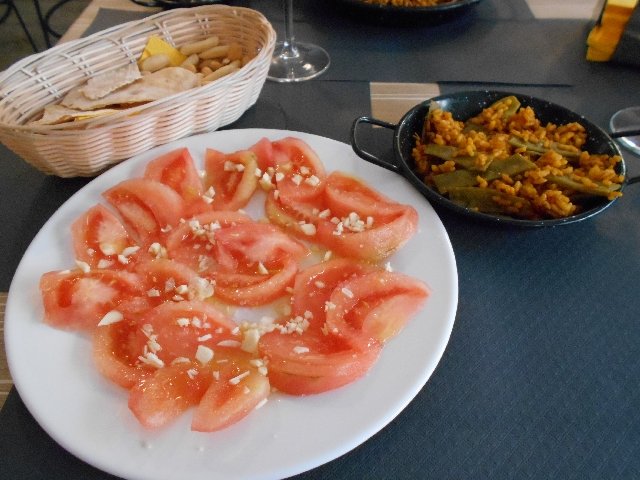 I know that there are many vegans and vegetarians who would never dream of eating rice that had been cooked in the same pan with meat, and maybe I’ll get hate mail for this, but the way I see it we live in an imperfect world, and sometimes we have to choose between less than ideal choices.

On this particular day, my choices were as follows: (a) I could give my money to a place that promotes the slow torture and killing of animals for human entertainment, sit underneath the stuffed carcass of a brutally murdered bull and feel his eyes watching me as I smugly ate my (presumably) pure vegan asparagus, safe in the knowledge that I had not contaminated my body with any meat or animal products.

Or (b) I could sit in a cheerful room decorated with old black-and-white photographs of Spanish villagers eating paella, be waited on by kind and sympathetic servers, and eat a lovely improvised tomato salad and some rice that (gasp!) might have soaked up a bit of animal fat in the cooking process.

When faced with options such as these, I try to follow the rule of doing the least harm, and I’d like to think I achieved that with this meal. If nothing else, choosing the paella certainly did the least harm to my emotional and psychological well-being. 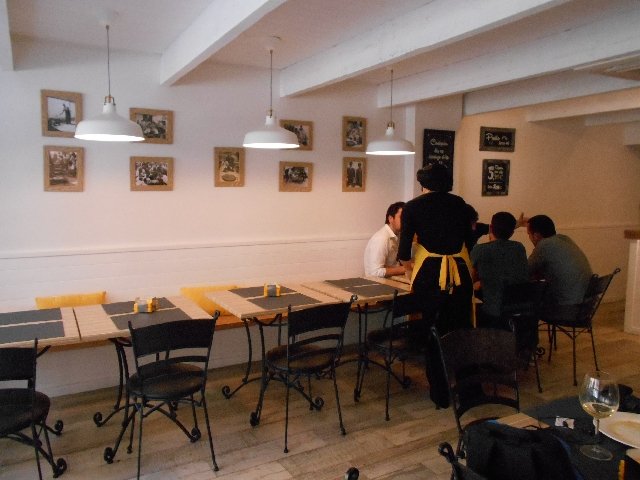 The interior of friendly La Paella. No bull’s heads in sight.

For dinner that night, I eagerly returned to Bar Ecológico Gaia and was not disappointed. The menu included plenty of vegan and gluten-free options, both clearly marked, and I had a hard time narrowing down my order from so many choices.

In the end, Nick and I shared a plate of croquetas that was a mix of two different varieties: apple/cinnamon and basil/macadamia nut. I never would have guessed I’d have so many opportunities to sample vegan croquetas during just one week in Spain!

While all the ones we tried were delicious, I really loved Gaia’s for their very inventive flavour pairings. For any other Americans who have childhood memories of going through the Checkers drive-through after church on a Sunday, the apple/cinnamon ones reminded me sooo much of Checkers’ apple fritters, but without all that grease. 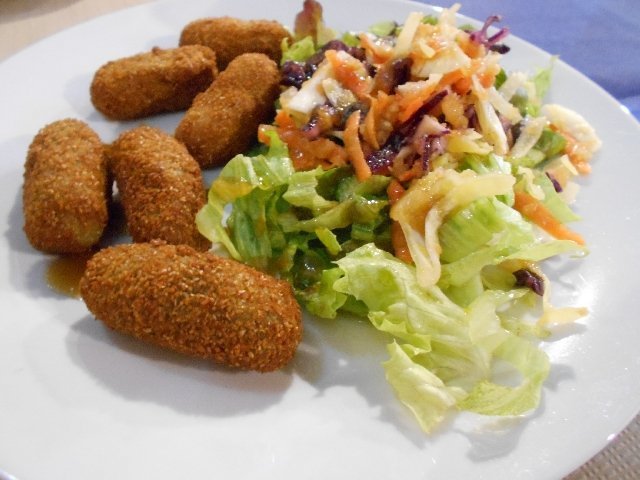 For my main course I had the selection of tofu with vegetables. This included two different types of tofu – one with olives and another one with a smoky flavour reminiscent of bacon. 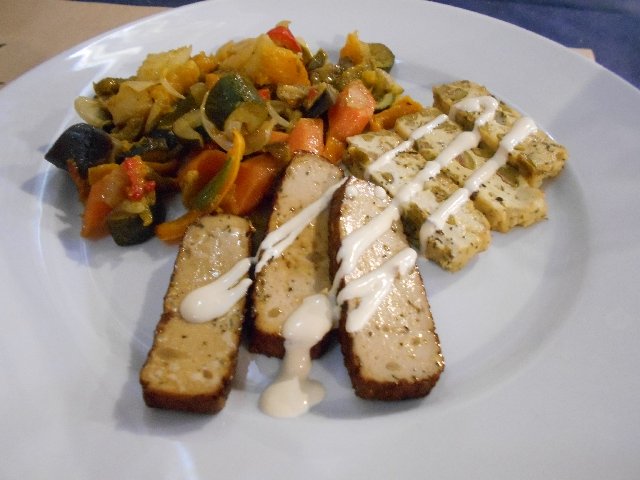 Selection of tofu with vegetables

Both were delicious, and I was also thankful for the generous portion of vegetables after my veggie-poor meals at Shangri-La in Mérida. Nick had the veggie burger (also vegan), which included fries, a salad and two veggie patties (but no bun). 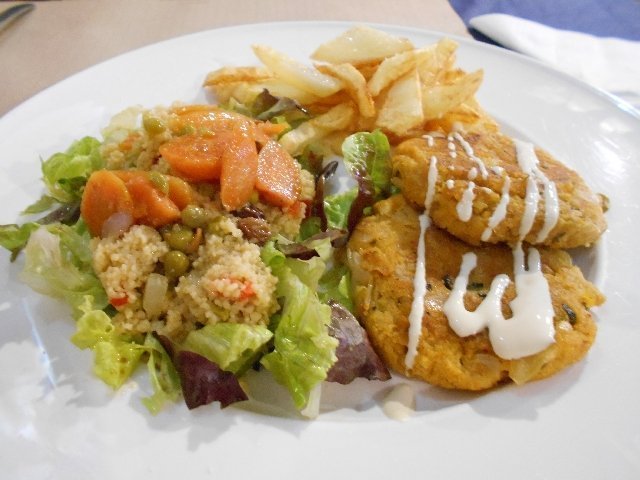 There were several vegan dessert options, and the portions were huge! For some unknown reason, they actually gave us two slices each of the cakes we ordered (I chose the apple plum cake). One would certainly have been sufficient, but did I stop at one? No, no I didn’t. 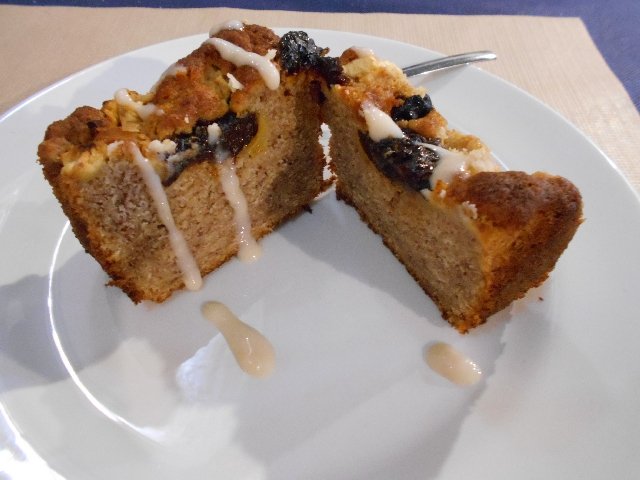 While I thoroughly enjoyed my meal at Bar Ecológico Gaia, it turns out that it’s not really necessary to seek out a vegetarian restaurant in order to eat great vegan food in Seville.

During our wanderings through the barrio Santa Cruz, I was struck by how many vegan tapas were listed on the signs outside the many tapas bars we passed by. I was hoping to go on a bit of a tapas crawl to sample the different ones on offer, but even that turned out not to be necessary.

The next day, we parked ourselves outside one of these places and ordered no less that five vegan tapas from one single establishment – Bodega Belmonte.

Here I sampled the spinach with chickpeas (the daily special), salmorejo (a cold soup similar to gazpacho, ask for it without egg on top [sin huevos]), the fried eggplant (comes with either honey or salmorejo as a sauce), the grilled mushrooms, and the grilled artichoke hearts, each one more delicious than the last. 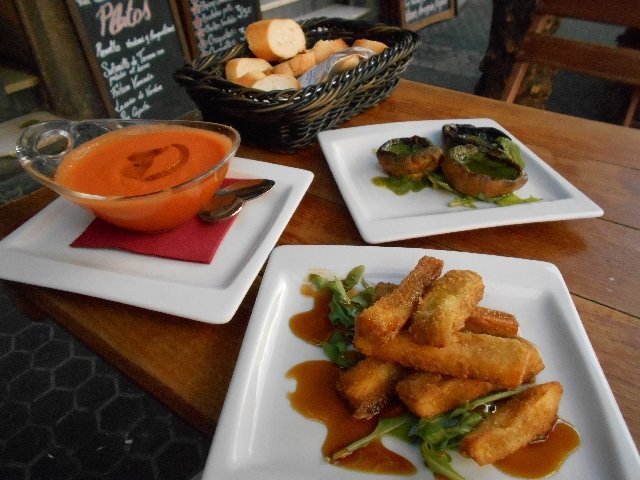 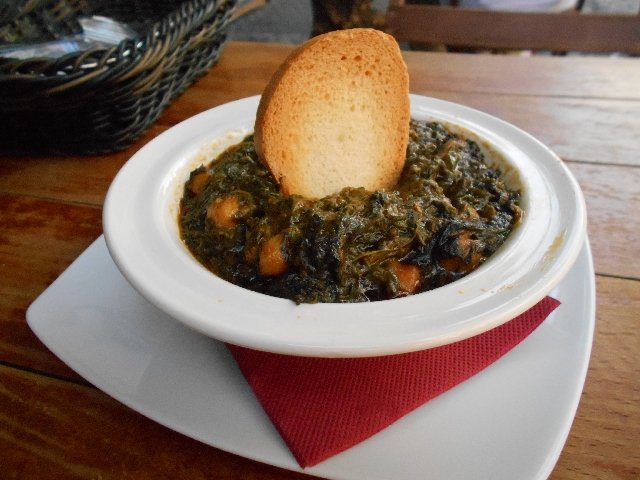 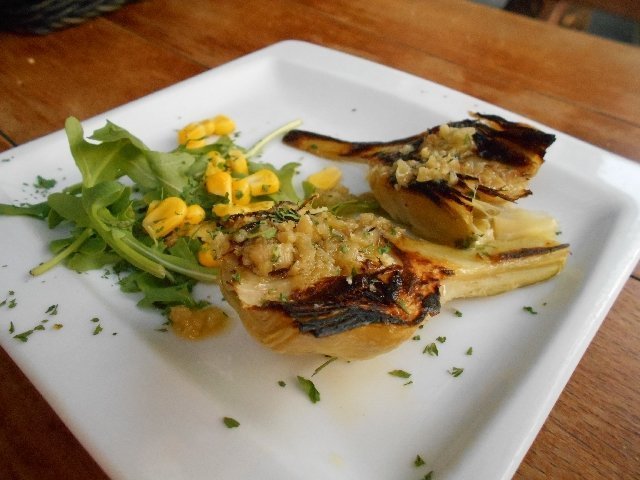 One word of caution: I suspect that the spinach and chickpeas had been cooked with chorizo or some other sausage, because there was a bright orange, oily residue at the bottom of the bowl, and you just don’t get that colour from cooking in olive oil.

The bar next door also offered this dish, so you could try there instead, or check out Vegan Rock – a vegan tapas bar formerly known as Alameda Rock that also reportedly serves espinaca con garbanzos (spinach with chickpeas).

One more word of caution: While putting together this post, I noticed from looking at photos on Trip Advisor that there are, in fact, mounted bull’s heads on the walls inside Bodega Belmonte.

Since we ate at the tables outside, I hadn’t noticed. Ah well, like I said, we live in an imperfect world. The good news is that the weather is usually sunny in Seville, so odds are whatever time of year you visit you will also be able to dine al fresco and avoid the whole bullfighting motif.

So, how do you feel about consuming animal products in cases where it doesn’t contribute to animal suffering? I may regret this, but go ahead, share your thoughts in the comments section below!

To view the map below in Google Maps, click here.