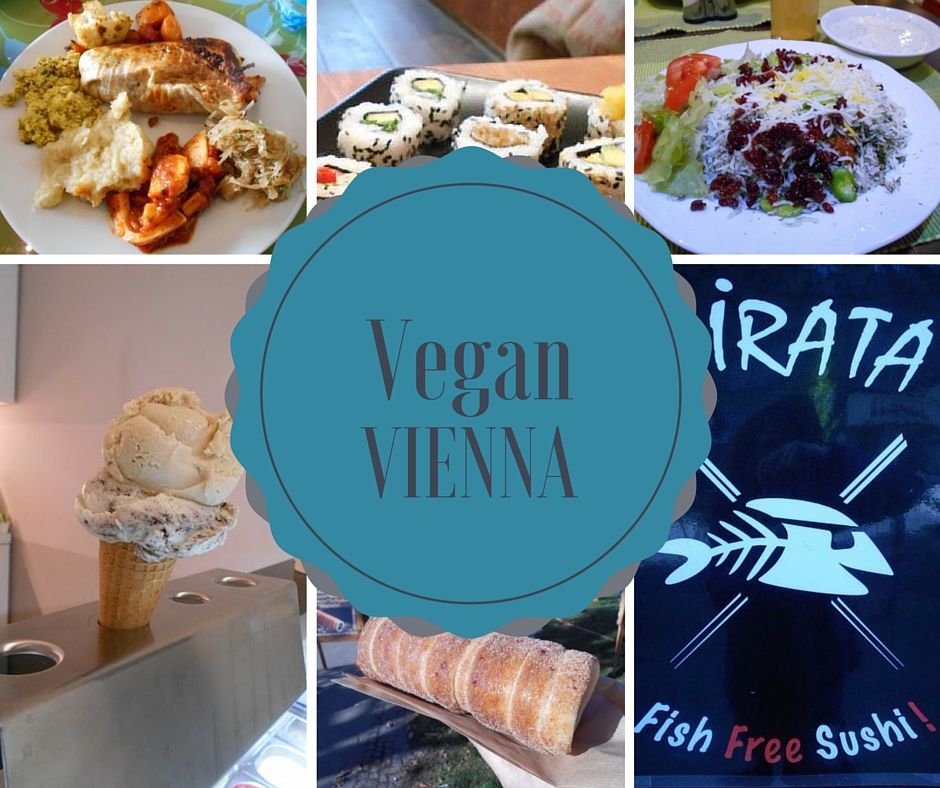 Every time I visit a new city in Europe, I'm astounded by the number of vegan options I find. You'd think I'd be used to it by now, but nope, it still gets me every time.

I guess it's because the vegan movement is so small here in Geneva, Switzerland, where I'm currently based. Don't get me wrong, it is growing, and just in the past few months I've met lots more vegans and vegcurious people here, which is awesome. But Geneva has a looong way to go to catch up with some of its neighbours.

Like Vienna. Now, I'll be honest; Vienna is not really my kind of town. I mean I know it's got plenty of culture and all that, but classical music, opera, flamboyant Baroque architecture...none of it is really the type of culture that interests me.

Luckily, the vegan food scene is fabulous. Not only are there oodles of vegan and vegetarian restaurants to choose from, but the vegan movement has clearly worked its way into mainstream consciousness. I'll give more evidence of this later, but for starters here's Exhibit A: Anker Bakery.

Address: Many locations throughout Vienna (including at the airport)

Opening Hours: Varies according to location. Generally opens very early in the morning and closes around 6.30 or 7.30pm.

Anker is a popular and long-standing bakery chain that's been operating in Vienna for more than 100 years. My first introduction to it was at the airport, where I was greeted by this sign: 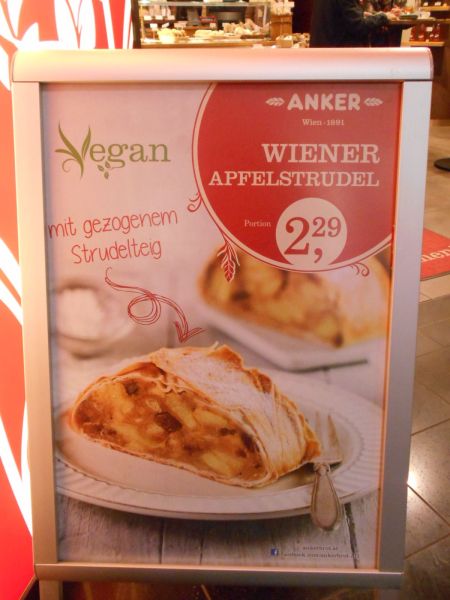 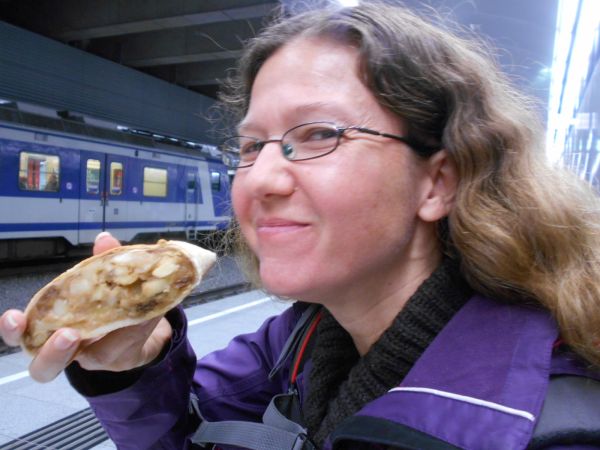 I haven't even hopped on board the train into the city yet, and already this trip is off to a good start. The apple strudel is just one of a number of vegan items sold by Anker – all of which are clearly marked. For those with a sweet tooth, there are raspberry and apple turnovers, and if you're looking for something savoury there's also a vegan sandwich and a vegetable soup, and of course plenty of different types of bread. Very mainstream, and very vegan-friendly.

UPDATE: In January 2017, Pirata unfortunately closed its doors. The announcement sounded like it might not be permanent, though, so it's worth checking their Facebook page for updates. 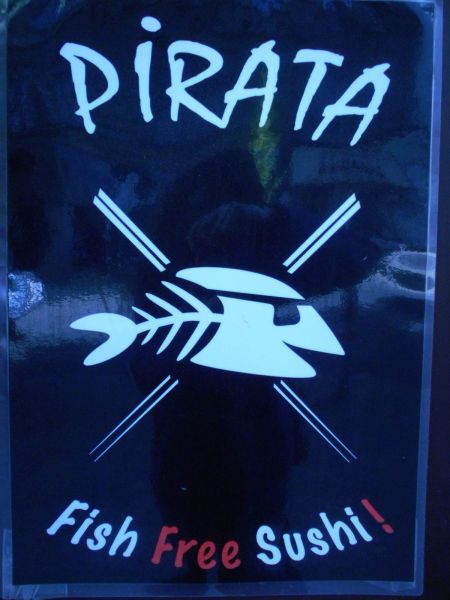 Fish-free sushi! It doesn't get any better than that. Before I became vegan, sushi was my favourite food. As in, if I'd had to eat just one food for the rest of my life, I would have chosen sushi.

And maybe I still would, if eating sushi meant feasting on the gorgeous rainbow of colours and flavours on display at Pirata. This goes waaaay beyond cucumber rolls, taking the art of sushi to a whole new level. 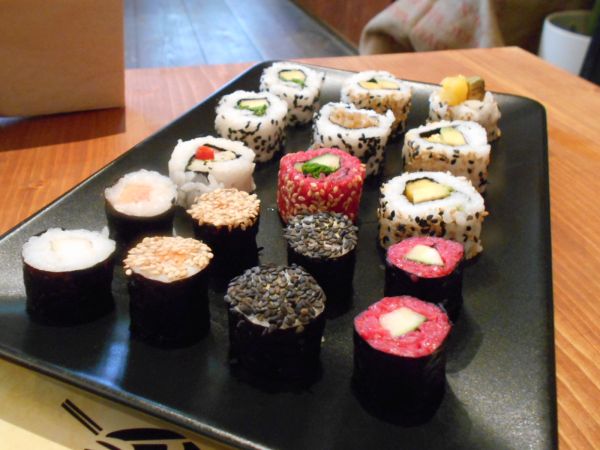 Even though everything is vegan, the owners have chosen to stick with a nautical theme. And why not? Seaweed is a main feature of sushi after all, so why can't we start redefining what “seafood” really means?

The interior is cozy, with just a few tables, but if there's no room you can also order take-away. A wide variety of maki and uramaki roles are on offer, some of which are truly creative.

They also have several different sizes of platters named after different types of boats (from gondola all the way up to air-craft carrier), so if you want to try just one or two pieces from multiple rolls this is a good option.

Note: While the Neustiftgasse location stays open year round, the Margaretenstrasse one closes over the winter. 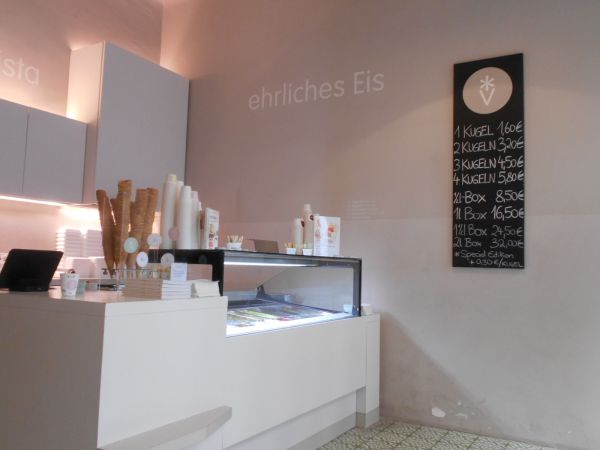 Veganista is a 100% vegan ice cream shop that offers a changing mix of traditional flavours and more inventive ones. And when I say “inventive”, think “rosemary and pine nuts” or “orange, olive oil and saffron”.

I went with the peanut butter and the cookies and cream, and both were delicious. A variety of different plant-based milks are used in the ice creams, and, for those with allergies, each flavour clearly states which kinds of milk it contains. And yes, the cones are vegan too 🙂 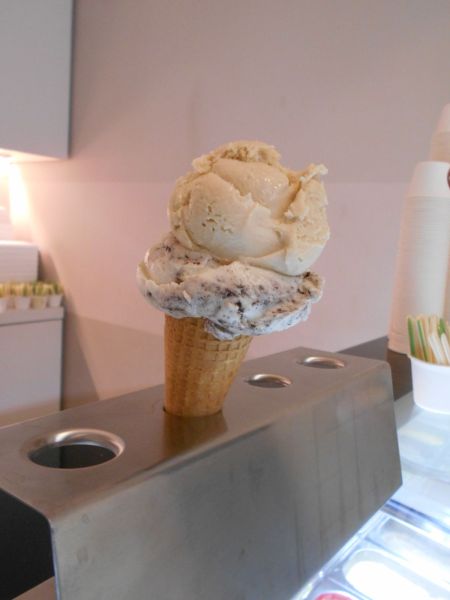 Address: Varies. Will be at Am Hof Christmas market December 2015. 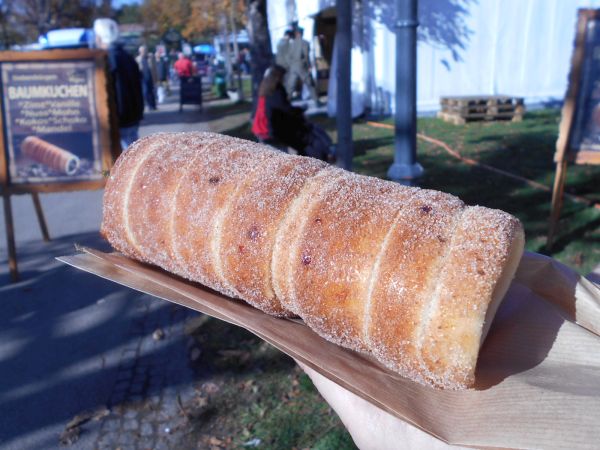 They are a popular sweet treat throughout many European countries, and one that I have often seen at Christmas markets and other events where food stalls tend to pop up.

Every time I asked if they were vegan, the answer was always "no", so eventually I stopped asking. Imagine my amazement then, when I saw this: 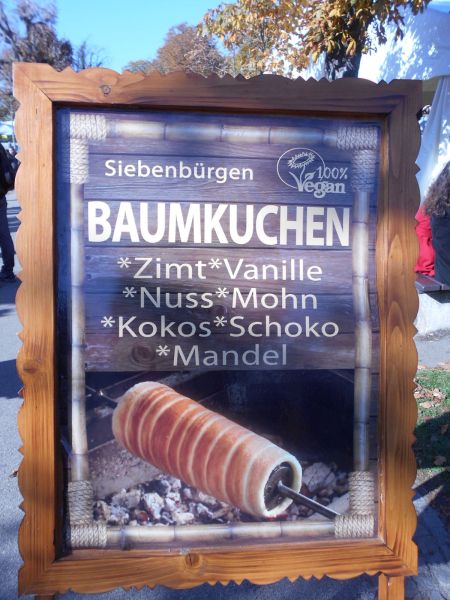 And the weirdest part was, the stall was part of some kind of Austrian military fair that we randomly stumbled into. Mixed in among the camouflage helicopters, tanks, and soldiers handing out recruitment flyers was a stall selling baumkuchen. But not your run-of-the-mill baumkuchen. VEGAN baumkuchen!

Never mind that I had just scarfed down an ice cream cone at Veganista; obviously I couldn't pass up this once-in-a-lifetime opportunity to eat a cake the size of my forearm.

Since it was my first time, I decided to stick with the most traditional variety, with just cinnamon and sugar sprinkled on the outside. If you prefer, you can also have them rolled in chocolate or almond slices.

The stall is run by Andrea Kӓmpf, who told me that her next gig will be at the Am Hof Christmas market. If you're in Vienna to do a bit of Christmas shopping, be sure to look for her! 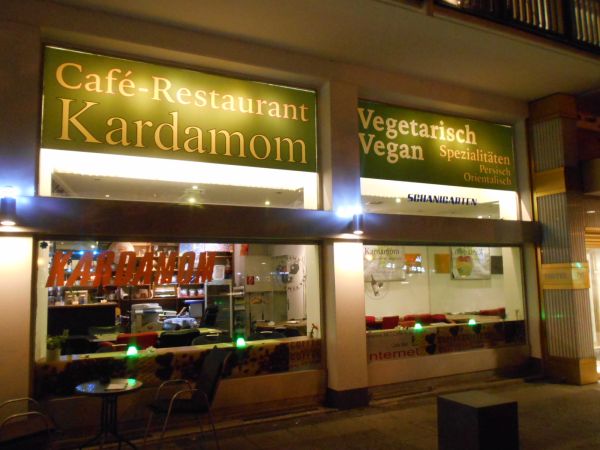 Kardamom is a vegetarian restaurant that serves Persian (Iranian) cuisine. The food is very good, and this is a rare chance to try vegan versions of Iranian fare (judging from the research I've done, veggie food is pretty hard to come by inside Iran).

The only reason I hesitate to recommend Kardamom is that the service is a bit unpredictable. When I first enquired about which items were vegan, the young man behind the counter told me that everything was.

Sceptical, I pointed to the carton of cow's milk sitting on the counter in front of him. He was visibly confused and responded by saying, “This is organic milk”. Oy vey. Oh well, I'm pretty sure he was new on the job, so hopefully by the time you read this he will have learned the ropes. 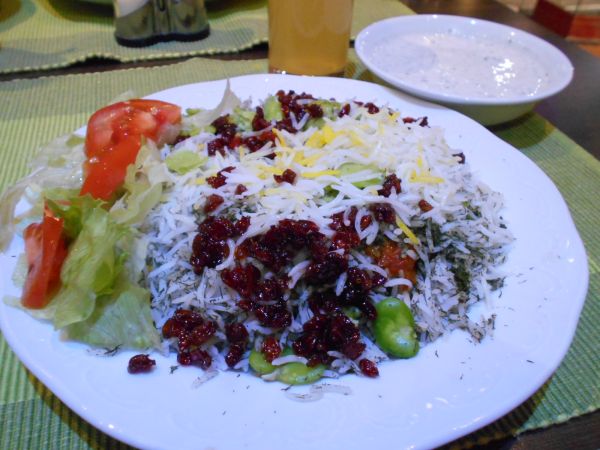 It did seem that most items on the menu were vegan or could be made vegan (the mint yoghurt sauce, for example, can be made with soy yoghurt on request). Exactly what was on the menu was also unclear though, as there were several discrepancies between the two copies we were given.

I had the Persian rice with barberries (these are a tart, dried berry similar to cranberries) and broad beans (pictured above). Though it was not listed in the description, there was also some kind of plant-based meat hiding under the rice. Nick had an eggplant and lentil curry served with rice and mint yoghurt, and we both enjoyed our meals. 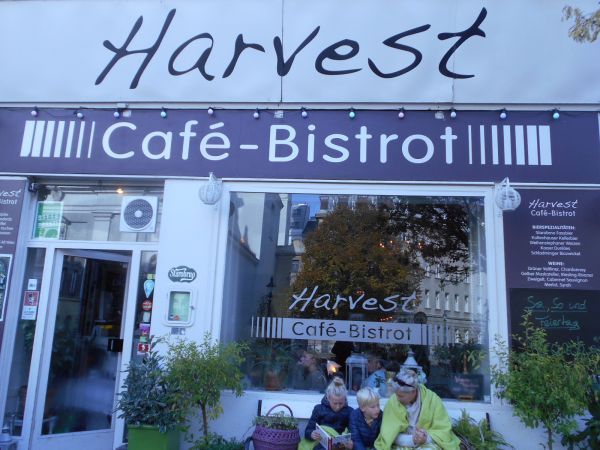 Harvest is an all-vegan restaurant that does an amazing all-you-can-eat brunch buffet on Saturdays and Sundays. If you're in Vienna on a weekend, this is an experience not to miss.

There is a huge variety of cold and hot dishes on offer, ranging from breakfast items like cold cereals, tofu scramble and bread with peanut butter or hazelnut spread, to heartier soups, stuffed burritos and grilled vegetables. Come hungry.

Drinks are sold separately, as are desserts if you have room. When the buffet is on, it's not possible to order from the à la carte menu. 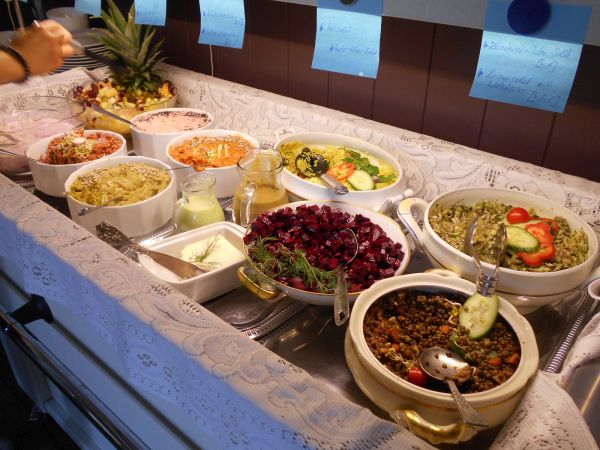 Advance reservations are recommended, as the brunch is quite popular. There are two dining areas – the front room is filled with standard tables and chairs, while the back room is a cosier setting with oversized couches and armchairs.

And now, just in case there was any doubt, here's some more proof that veganism has gone mainstream in Vienna. Exhibit B: 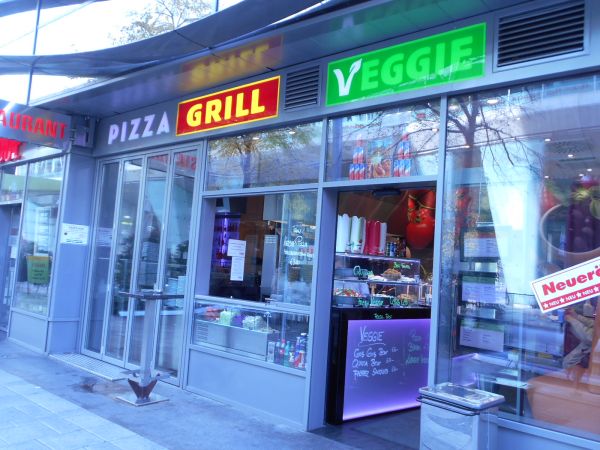 Just another no-name kebab joint. Or is it? Yes, you can see schwarma meat roasting on a spit in the background. But is that what the owners have chosen to show off in their display case?

Nope! They've given the prime position to the falafel, quinoa, couscous and fresh veggies, all prominently on display, and all vegan. We didn't eat here, but if you want to seek it out it's in the Wien Mitte shopping mall, right across from the City Airport Train (CAT) station. 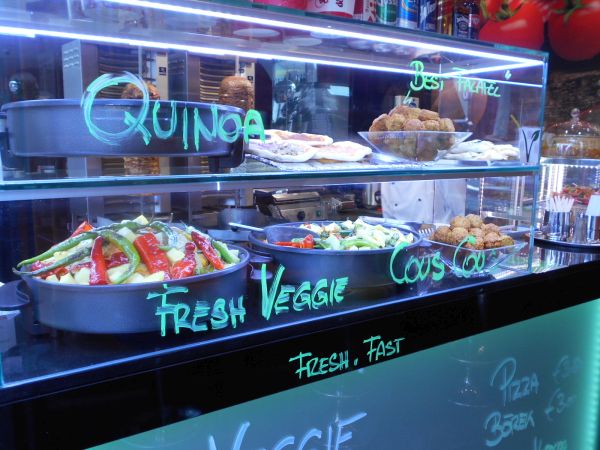 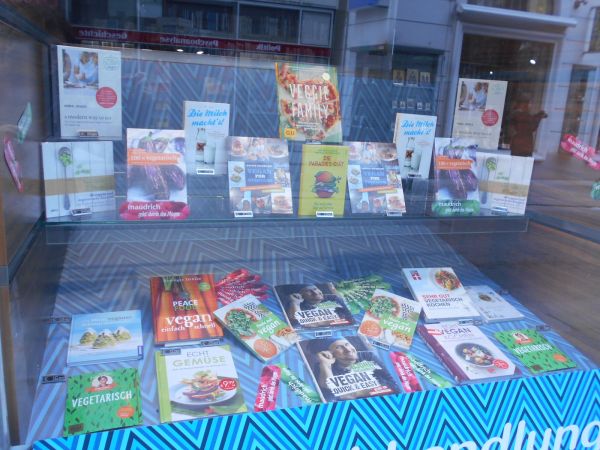 I had to do a double-take as we passed by the window of this bookstore. Mind you, this is a mainstream bookstore selling everything from dictionaries to trashy paperback novels, and yet they've devoted an entire display window to vegan and vegetarian cookbooks.

And speaking of books, fellow vegan traveller and blogger, Caitlin Galer-Unti of The Vegan Word, has just released her book titled "The Essential Vegan Travel Guide". 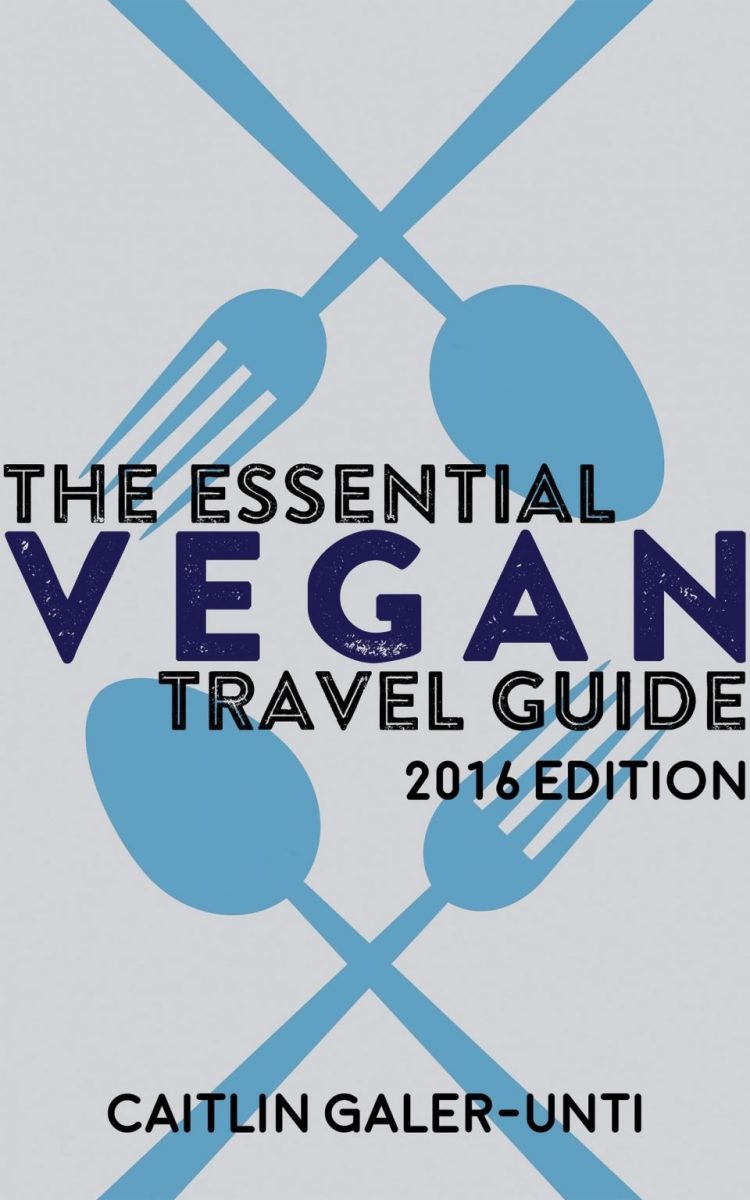 It's a truly comprehensive, 153-page guide packed with loads of helpful tips to cover all aspects of your trip, from doing quick and effective pre-trip research, to packing, to making friends once you get there.

Whether you're a seasoned traveller or a newbie who is nervous about staying vegan while on the road, you're sure to learn some new tricks from Caitlin, who will put your mind at ease with her practical advice and funny, easy-to-read style.

To be honest, I kind of wish Im had written this book. But since I didn't, I'm doing the next best thing by offering you a chance to win a free copy!

UPDATE: The giveaway has ended, but don't worry, you can still purchase a copy on Amazon: