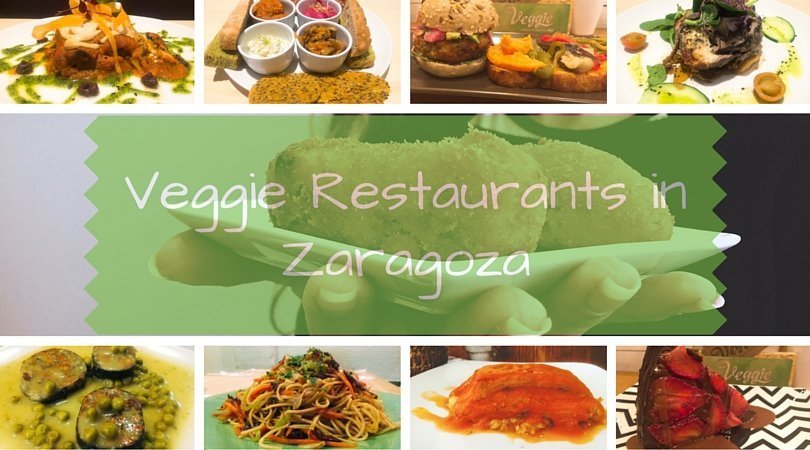 The word is out that Madrid and Barcelona have recently become vegan hotspots in Europe. Earlier this year, Barcelona even declared itself to be a “veg-friendly city” and a “friend of vegan and vegetarian culture”.

But what about Spain's smaller, less touristy cities? Outside of the country's major metropolitan areas, most vegan travellers don't expect to find many restaurants that cater to their needs.

Which is why I was thrilled to find that there at least nine vegetarian and vegan restaurants in Zaragoza, the regional capital of Aragón! I say “at least”, because one of them we stumbled on completely by accident, so who knows what other undiscovered gems Zaragoza might be hiding!

Despite the fact that we passed in and out of Zaragoza a number of times during our two weeks of travel around Aragón, we still didn't have enough time to try out all the veggie restaurants. We gave it our best shot, though, and can definitely recommend the following vegetarian and vegan restaurants in Zaragoza. 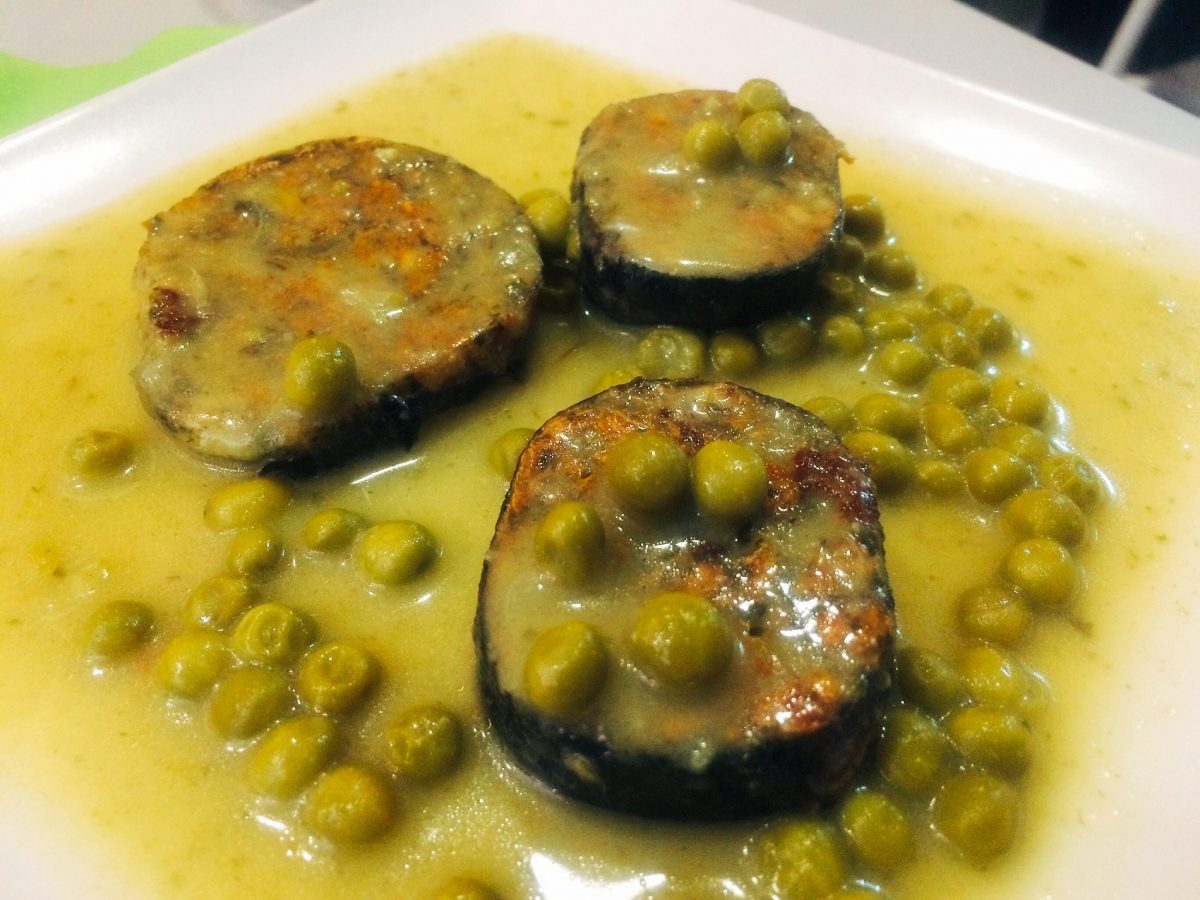 Craving that taste of the sea? This vegan cod fish ("vacalao") just might hit the spot.

This is Zaragoza's only 100% vegan restaurant, though that's not immediately obvious, as they're a bit shy about using the “V” word. The menu is basically a business card holder with each dish listed on a separate card, many of which also include nutritional information about the dish, like grams of protein and number of calories.

The mushroom croquetas were crispy on the outside and soft and creamy on the inside and did not disappoint. The lentil soup was another highlight and was particularly warm and comforting on a wet, overcast day.

And for anyone craving the taste of seafood, the “vacalao” might just hit the spot. The name is a play on words based on “bacalao”, the Spanish name for cod. The “vacalao”, then, is a pretty convincing home-made mock fish that is wrapped in nori and topped with peas and a creamy sauce.

I was less impressed with the tofu empanada, which was rather dry, and the tortilla de patatas (Spanish potato omelette), which didn't taste as authentic as other vegan versions I've tried at places like Viva Burger and B13 in Madrid. Still, El Plato Reberde is a sound choice that serves inexpensive, all-vegan food, including plant-based meats as well as more veggie-focused dishes. 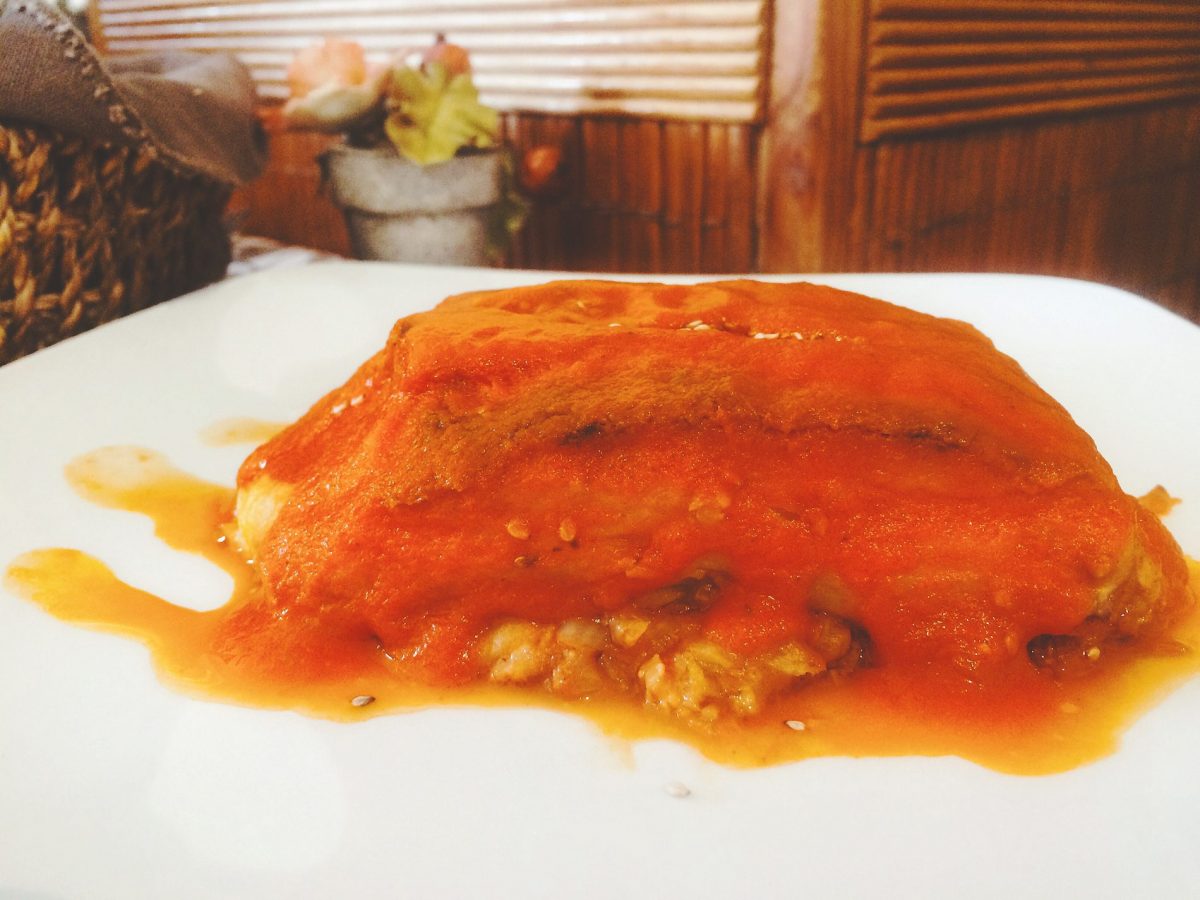 "Pastel" can mean a lot of things in Spanish. This one was kind of like a potato and tempeh lasagna!

La Retama is a small and cozy vegetarian restaurant that is popular with the lunch crowd and serves a set 3-course meal for €15. Be aware that the à la carte menu posted on their website is only for dinner.

If you come at lunchtime, you'll be limited to the changing, seasonal dishes written on the chalkboard. This shouldn't be a problem though; on the day we visited, most of these dishes were vegan anyway.

I was happy to see an adzuki bean soup listed among the first courses, as it's often difficult in Spain to find beans or other legumes that haven't been cooked with animal parts. For our second course we both chose a potato and tempeh pastel, which is often translated as "pie" but was actually more like a lasagna. Which is not a bad thing, of course!

My only complaint is with the dessert. I thought the carob cake tasted a bit too much like a “healthy” dessert, and this is coming from someone who likes healthy desserts! Nick seemed to enjoy his slice though, so maybe I just don't like carob.

Overall, La Retama is a reliable choice for old-school vegetarian food that is both filling and healthy. 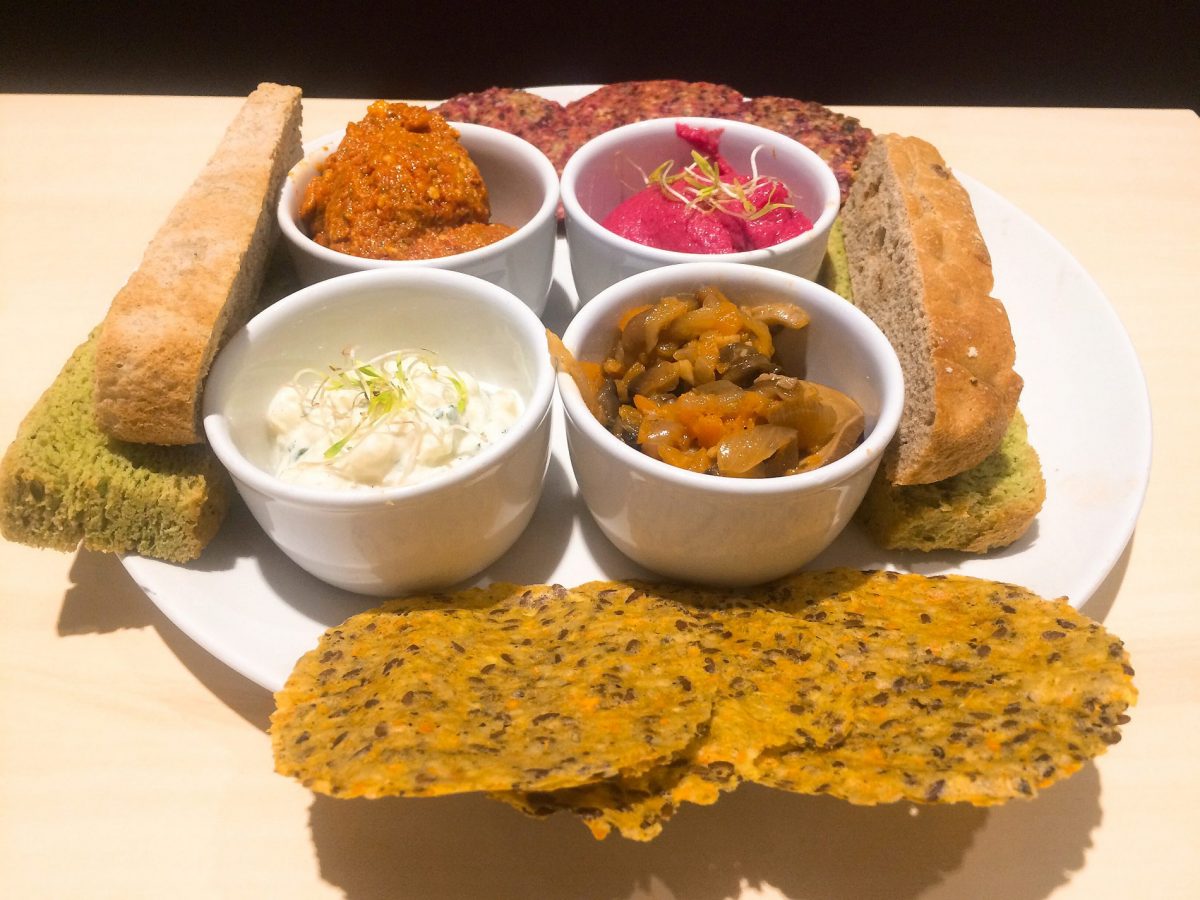 The dips and breads platter at Baobab is sure to be a highlight of your trip to Zaragoza!

Hands down, this was the best of the vegetarian and vegan restaurants we visited in Zaragoza. Baobab is definitely a more upscale, classier establishment than the others listed here, and yet the prices are still reasonable, making it very good value. A main dish will set you back €11-12, and there's also an economical lunch menu on weekdays.

Vegan and veganizable options are clearly marked on the menu, as are gluten-free options. The menu changes according to the seasons. We were there in March and ordered from the winter menu, so I can't guarantee you'll see the same dishes if you go at a different time of year.

We started off with a mix of dips and home-made breads and crackers that were just delightful. This was called “todos al unte” on the winter menu, but there appears to be something very similar on the spring menu that goes by the rather less inventive name of “crackers”.

As our main dishes we ordered the vegan lasagna and the Baobab moussaka. Both ranked among the best versions of those two dishes that I've ever tasted! Whereas most vegetarian versions of moussaka use lentils or a mock meat to replace the traditional meat layer, the Baobab version really shines the spotlight on the eggplant, which is deliciously soft and will melt in your mouth.

Our meal was so filling that I couldn't even find room for the vegan cheesecake! Shocking, I know. This place is deservedly popular, so booking ahead is highly recommended! 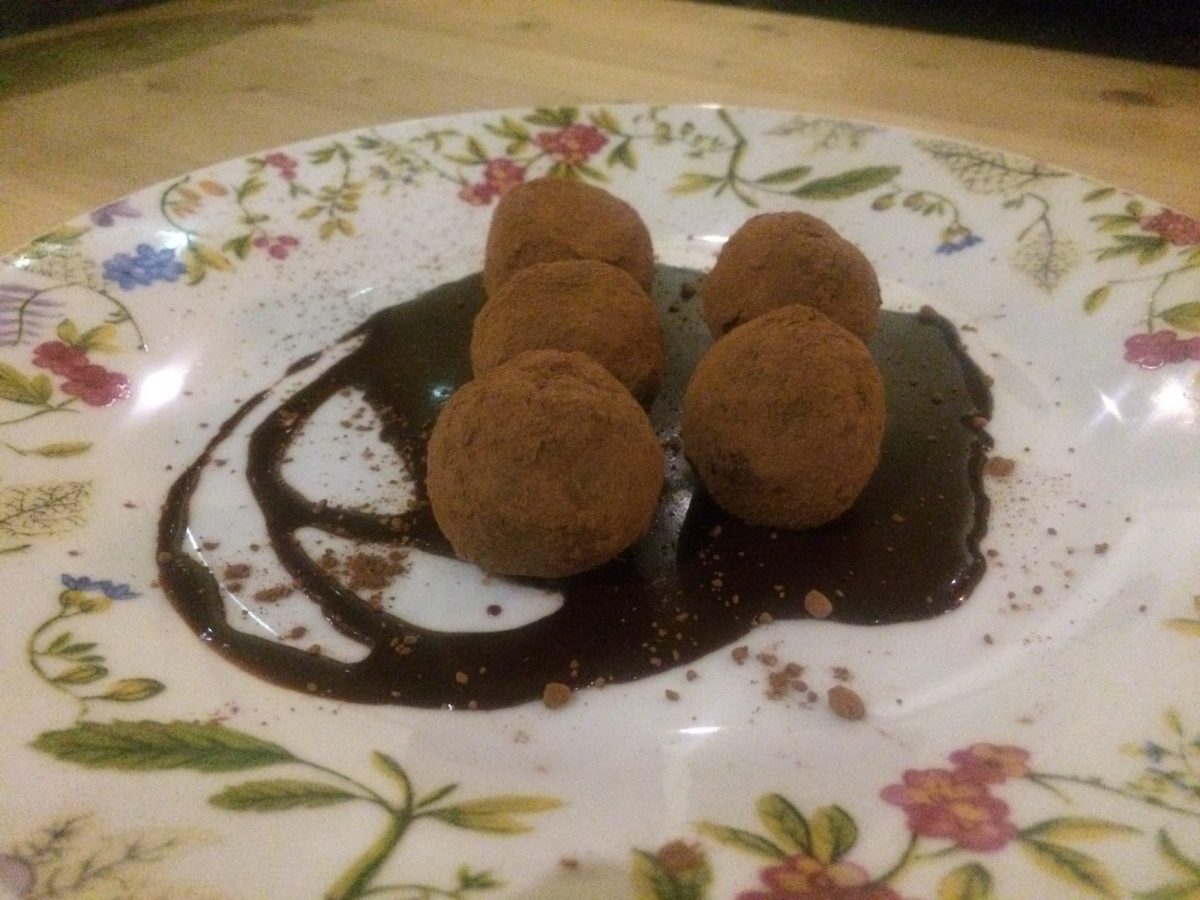 I was a bit intimidated by some of the reviews for Birosta on HappyCow, which made it sound like a hard-core punk bar. Not sure if we would fit in, we decided to try it anyway. Well, the place must have been redecorated since then, because the interior was very pleasant – a world away from what I had imagined.

Even though Birosta is a lacto-ovo vegetarian restaurant, there were plenty of posters on the walls actively promoting veganism. All vegan items are clearly marked on the menu, which focuses on local, organic ingredients. They even list the local producers they work with on the front page of the menu!

We shared a pesto and potato salad as a starter, and as my main dish I ordered "le cook sportif", which was a satisfying and healthy mixed plate of a bunch of small dishes. Note that the dish might not contain the exact ingredients listed on the menu.

For example, mine was supposed to come with broccoli but was served instead with an unidentified root vegetable. In addition to this was falafel, rice with sun-dried tomatoes, tofu, and satay sauce. Everything was scrumptious except the falafel, which was waaayyyy too salty. I kind of wondered if the lid had fallen off the salt shaker and someone had dumped a whole heap in by mistake.

I also wasn't sure what to do with the ramequin of satay sauce, so I gave it to Nick to add to his pad thai. For dessert, we shared the vegan chocolate truffles. They were extremely rich and decadent, so I was glad I hadn't ordered them all for myself.

In addition to the restaurant, there is a small store up at the front that sells vegan cheeses, chorizo, etc. The food here was good and I would gladly go back. Just be aware that, because they depend on local producers, they don't always have everything in stock. 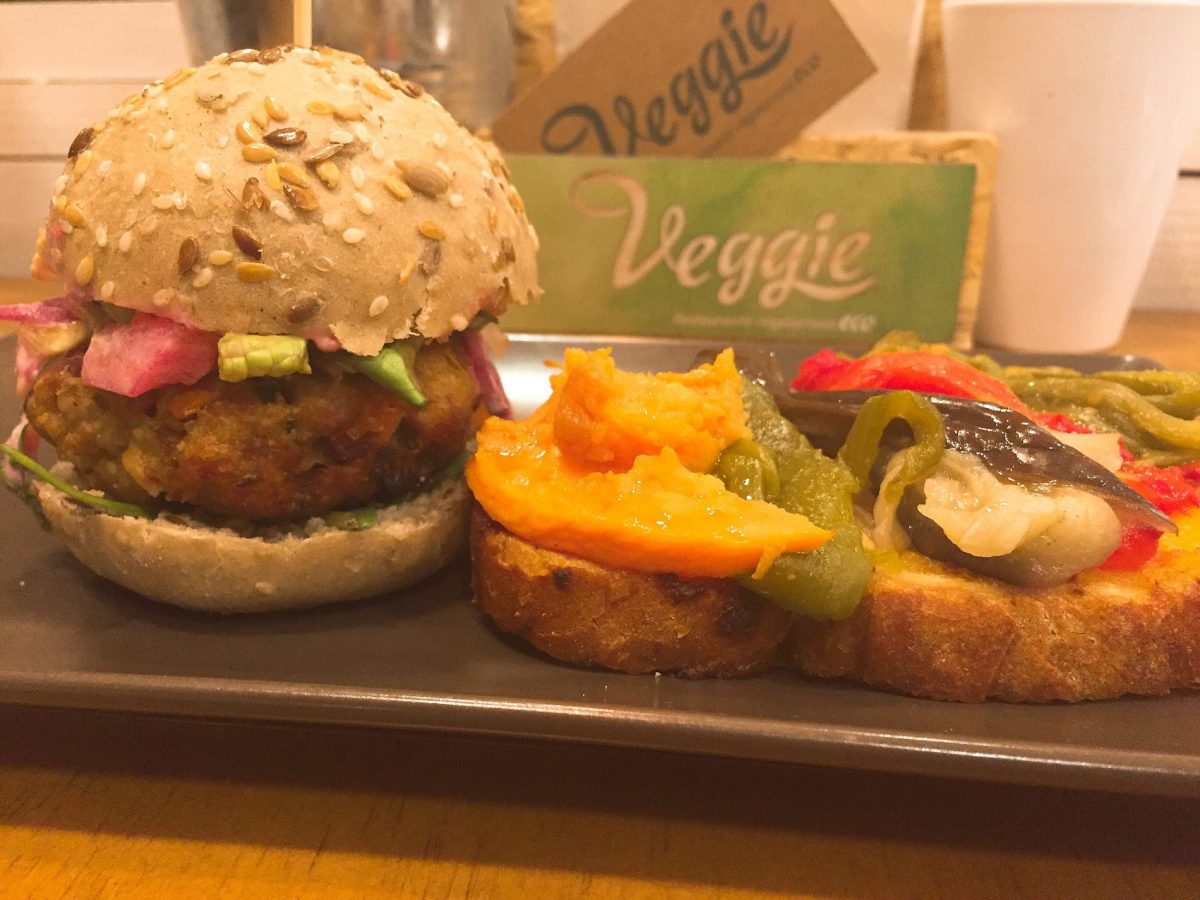 The bar at Veggie has a huge selection of vegan tapas!

This place came as a total surprise to us. We were on a tapas crawl around the El Tubo area of Zaragoza and stumbled upon it completely by accident! You can read all about our tapas crawl here and watch the video on the Nomadic Vegan YouTube channel to see all the scrumptious vegan tapas we discovered.

Veggie does actually have a sit-down restaurant in the back, but since we were in search of tapas, we stuck to the bar area. There is a huge glass display case of small dishes at the bar, and almost all of them were vegan except the croquetas (a bit of a bummer, but at least you can get vegan croquetas at El Plato Reberde).

We chose a slider made with a soy patty, a curry shish kebab, tostadas loaded with a bunch of roasted vegetables, and a slice of chocolate and strawberry cake.

The purpose of our tapas crawl had been to point out some of the naturally vegan dishes that are often served in tapas bars, like patatas bravas, asparagus, spinach with chickpeas, etc. For a list of many more vegan tapas commonly found in Spanish bars, check out my Ultimate Vegan Guide to Spain.

There's no denying though, that it was a real treat to find vegan versions of the dishes that are normally made with animal products. The chocolate cake was the definite highlight and a wonderful way to end our tapas tour.