For most of my life, I had never understood why anyone would give up eating dairy products or eggs. After all, the chickens and cows didn’t have to die to give us their eggs and milk, did they? So what was the problem? And then in 2014, I was shocked and saddened as I began to discover just how much suffering and, yes, killing, is inevitably involved in the egg and dairy industries, whether it be on so-called concentrated animal feeding operations (CAFOs) or on organic family farms.

Let’s start with eggs. Firstly, it is important to realize that terms like “cage free” and “free range” are used by the egg industry to fool consumers into thinking that egg-laying hens live happy lives and get to roam free in green pastures and forage for bugs and worms to their hearts’ content. Sadly, the reality is very different. “Cage free” means just that and nothing more; the hens are not in cages. Most likely, they are raised in cramped conditions in a dark barn with very little exposure to sunlight and have had their beaks and wings clipped without any anesthesia. “Free range” means that the birds are given an opportunity to go outside, but the use of this term is not subject to any regulations on the amount of time spent outdoors, the quality or size of the outdoor area, or the number of birds confined together. In reality, most “free range” hens never make it outside until the day they are sent to the slaughterhouse.

But let’s imagine for a minute that we ARE talking about an idyllic setting where the hens are allowed to roam free on open grassland. After all, these places do exist, and I know of at least one such egg farm near Geneva. So why don’t I purchase eggs from them? Because of this little guy: “Buff Orpington chick” by gina pina is licensed under BY-2.0

Let’s back up a minute. Egg farmers buy their hens as chicks from hatcheries, where they are bred. The problem is, half of the chicks who hatch are male, and they are useless to the egg industry because they, of course, will never grow up to lay eggs. These chicks have been bred to lay as many eggs as possible in their lifetime. They have not been bred to grow into fat, juicy chickens who will be slaughtered for their meat – that’s a whole other type of chicken known as a “broiler”. Since they will not grow large or fast enough to be raised profitably for meat, they are worthless to the industry, and they are killed within a couple of days after hatching. This is typically done by gassing them, leaving them to suffocate in dumpsters and garbage bags, or throwing them alive into a grinder to be ground up into feed for other animals.

If I saw a tiny, newborn chick trapped inside a blender, would I push the button to make the blades start spinning? Of course not! Why, then, should I pay someone else to do it for me just so that I can have scrambled eggs for breakfast? And of course, there is no “happy hens” retirement home for the lucky females who do get to grow to adulthood and spend their lives churning out far more eggs than their bodies were designed to produce. Once they stop menstruating (laying eggs), they too are sent to slaughter. And in case you are wondering, as I did, whether this happens even here in Switzerland, the answer is yes. It is true that Switzerland has some of the strictest animal welfare laws in the world, and yet 2.6 million male chicks are killed here every year, and egg-laying hens are sent to slaughter at the age of 15 months.

And what about dairy cows? During all the years that I ate and drank dairy products, it never occurred to me that cows, like humans, have to give birth in order to produce milk. This makes sense of course, because the sole purpose of that milk is to feed and nourish their young. Every year of her short life (4 to 5 years, compared to her natural lifespan of 25 years), a dairy cow is forcibly impregnated while being restrained in an apparatus commonly known as a “rape rack”. As soon as her baby is born, it is immediately stolen from its mother. If the baby is a girl, she will suffer the same fate as her mother, and after four or five years her body will be so worn out from the constant cycle of impregnation, pregnancy and milking that she will be considered “spent” and sent to slaughter. If the baby is a boy, his life will be much shorter. Either he will be slaughtered immediately, or he will end up living in a veal crate for a few months, unable even to stretch his legs out to sleep, and fed on a diet purposefully deficient in iron so that his meat will be the light, pale colour that consumers find desirable. The veal industry, you see, is a by-product of the dairy industry. 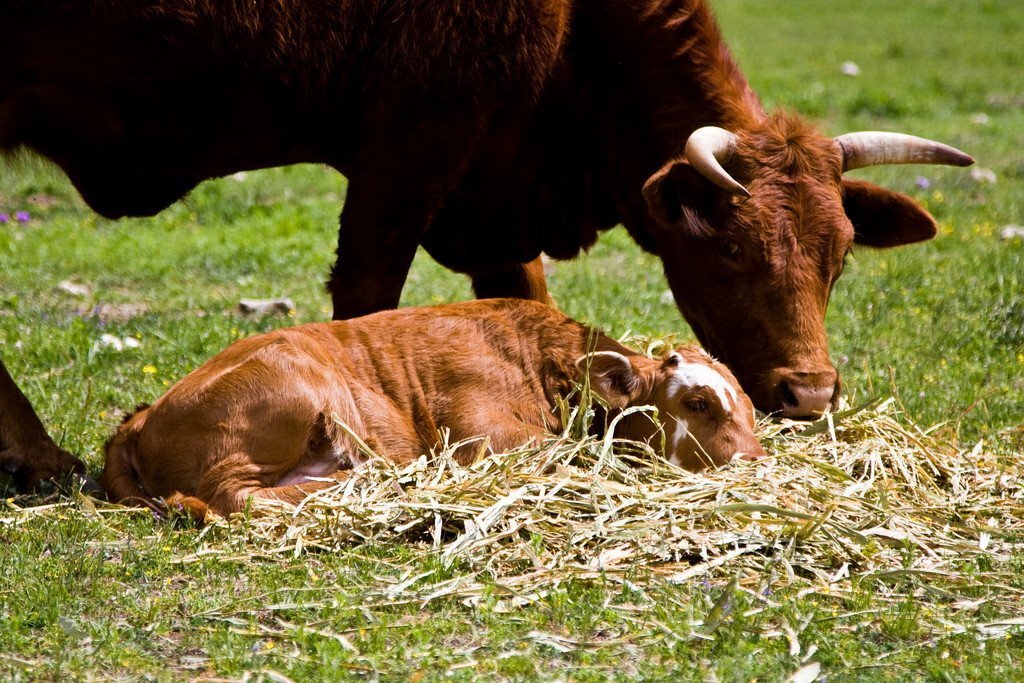 “Baby calf” by Christopher Leonard is licensed under CC BY-NC-SA 2.0

Unlike the products of the meat industry, eggs and dairy products used to look relatively harmless on my plate, making it much easier for me to maintain the disconnect that had blinded me to the truth and blocked the compassion within me. The truth, however, is that no matter how humane a dairy or egg producer claims to be, there simply is no such thing as slaughter-free animal agriculture. Like all business owners, egg and dairy farmers are in it to make a profit. When an animal is no longer profitable, he or she is sent to the slaughterhouse.

Once I discovered the truth behind these industries, I could no longer ignore the fact that I was responsible for the torture, suffering and murder of innocent lives. So, I decided to do what I could to reduce the amount of suffering in this world. I decided to become vegan. It was a wonderful decision that started me on the path towards living a joyful life full of compassion for all my fellow beings on this Earth.