Home This post may contain affiliate links. “Carnage: Swallowing the Past” Shows Why the World Will Be Vegan in 2067

“Carnage: Swallowing the Past” Shows Why the World Will Be Vegan in 2067 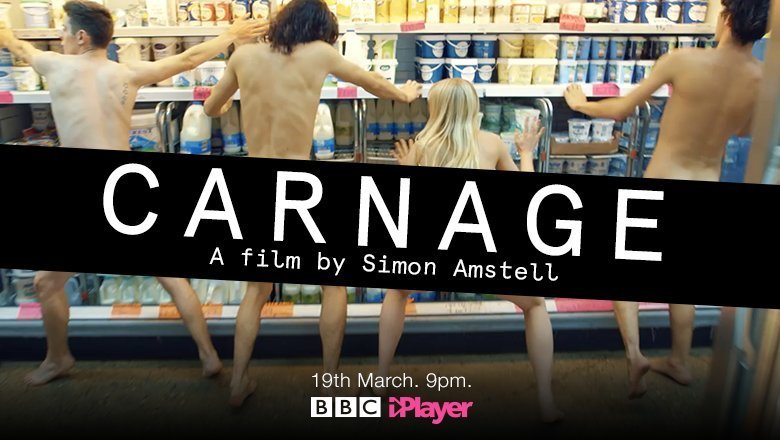 Instead of the usual wanderings across the globe in search of delicious vegan food, today we’re talking about a different type of travel. Time travel!

Strap on your hover board, because we’re going to be traveling through time into the future. And if you dream of creating a vegan world like I do, then you will be thrilled to know that the future is vegan!

At least, that’s the future portrayed in Carnage: Swallowing the Past - a feature-length film released by British comedian (and vegan) Simon Amstell.

The film is set in the year 2067, in a future where human society has evolved to a point where compassion and non-violence is the norm, and eating, wearing or otherwise exploiting animals is no longer socially acceptable. In fact, it’s abhorrent.

Members of the younger generation are horrified to think that their grandparents could have eaten a baby lamb.

Their elders, meanwhile, struggle to come to terms with their carnivorous past. They attend support group meetings to work through the shame and guilt they feel about having once eaten animals and their bodily secretions.

And yet, despite all the sorrow and disgust expressed by the protagonists, the film is most definitely a comedy, and a hilarious one at that. I laughed out loud at the naked vegans dancing in the supermarket aisles to deter shoppers from buying animal products.

hello. thank you for watching #carnage this evening. you know what to do. goodbye.

If you want to get specific about the film's sub-genre, it could perhaps best be described as a mockumentary.

At least, that’s how most non-vegans will see it. For vegans, it’s more like a vision of the future that we hope for and dream of. Of all the vegan films that I have seen, this is the one that fills me with the most hope.

With Carnage, Simon Amstell has done the impossible. He has made a film about eating animals that will make both vegans and non-vegans laugh, and perhaps even bridge the divide between them.

Each of us has our own set of skills, talents and tools we can use to share the vegan message in our own unique way. Amstell’s preferred tool – laughter – is perhaps the most powerful of all.

It’s difficult to bring up the issue of veganism without making non-vegans feel judged and attacked. Comedy, however, makes it easy for people to let their guard down.

Non-vegan viewers of Carnage might think at first that they are laughing at vegans. If they are part of a mixed audience, however, they will soon see that they are actually laughing with the vegans in the room.

And by the end, they may even be laughing at themselves.

Carnage: Swallowing the Past was commissioned expressly for BBC iPlayer, which is currently the only official distributor of the film. If you are in the UK, you can watch it on iPlayer here.

If you are anywhere else in the world, try this link to the video on Facebook. Last time I checked, all the uploads on YouTube had been taken down for copyright violation, but this FB link has been up for a while.

Hopefully, there will soon be a more official channel for the distribution of Carnage outside the UK. Because every human being needs to see this film.

Here’s to a vegan future!