Top Tips for Vegans in Thailand 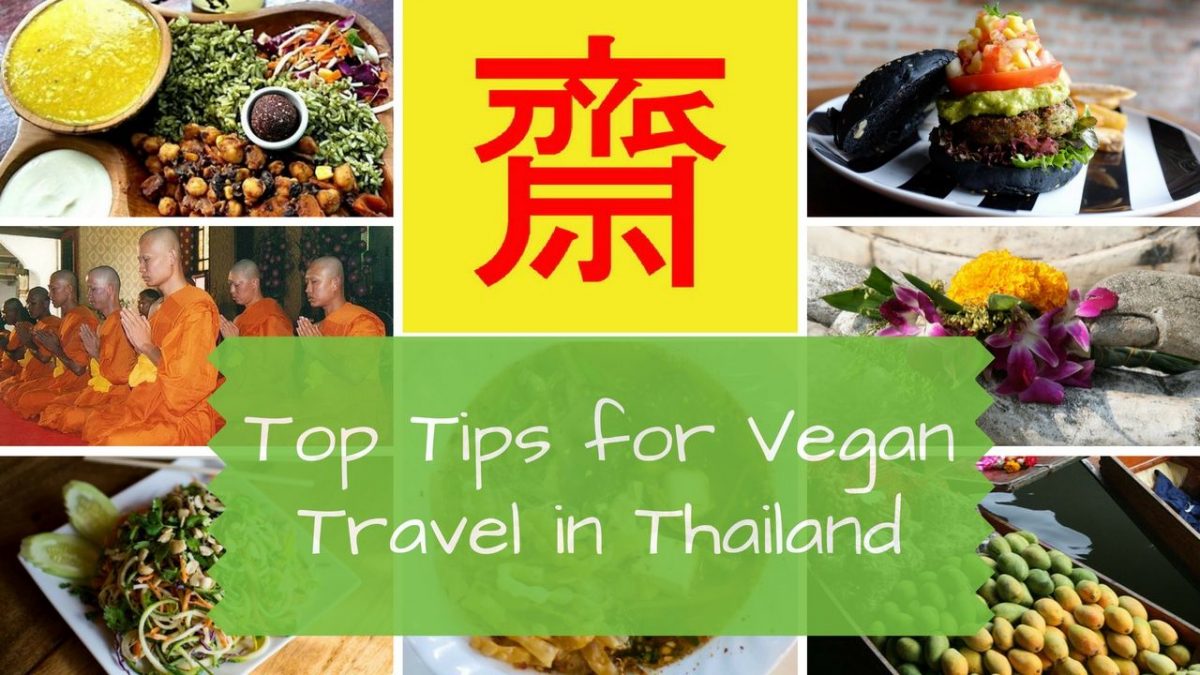 I get questions all the time from readers who want to know what it's like to travel as a vegan in Thailand. While I have traveled all around the country, it was back in my pre-vegan days. So I was thrilled when Dominique Julian offered to share her insider knowledge with Nomadic Vegan readers.

Having lived in both Bankgok and Koh Pha Ngan, Dominique has plenty of insider tips for finding the best vegan food in Thailand, including places that only the locals know about. Here she is to share her tips with you!

Ordering Food as a Vegan in Thailand

Being vegan in Thailand is easy. Fruit stands are at every corner, fresh markets are abundant, and the demand for organic products is growing. It is always possible to get vegan options in Thai restaurants, since their traditional cuisine is mostly composed of vegetables.

While in some countries there is no widely understood translation of the word "vegan", in Thailand this is not a problem. The concept of veganism, or "jay" (เจ), has been around for hundreds of years in Thailand and is connected with Buddhist spiritual practices.

Keep an eye out for red and yellow signs with the word "jay" written either in Thai (เจ) or in the traditional Chinese character (齋).

The latter is widely used by Thais of Chinese origin, who make up the largest overseas Chinese community in the world. To explain your vegan diet to Chinese speakers in Thailand and elsewhere, use this list of common Chinese words and phrases. 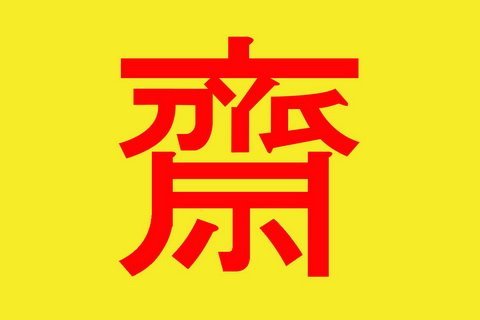 I lived in Koh Pha Ngan for two years, an island in the Gulf of Thailand, where yogis and vegans sing naked on the beach. I am not talking about Haad Rin’s Full Moon Party, but rather the village of Srithanu, a yoga community in the north west of the island.

This is vegan paradise. The local Thais offer vegan options with no MSG to please the health-conscious crowd that flocks here.

If you are in the area, check out ﻿﻿﻿Eat.co - a 100% vegan hub with a chill ambiance, hippy music and a little organic shop. Try their beetroot burger or the dal of the day. If you have the chance to be there during high season, you will be able to enjoy their lunch special, which is always super tasty. 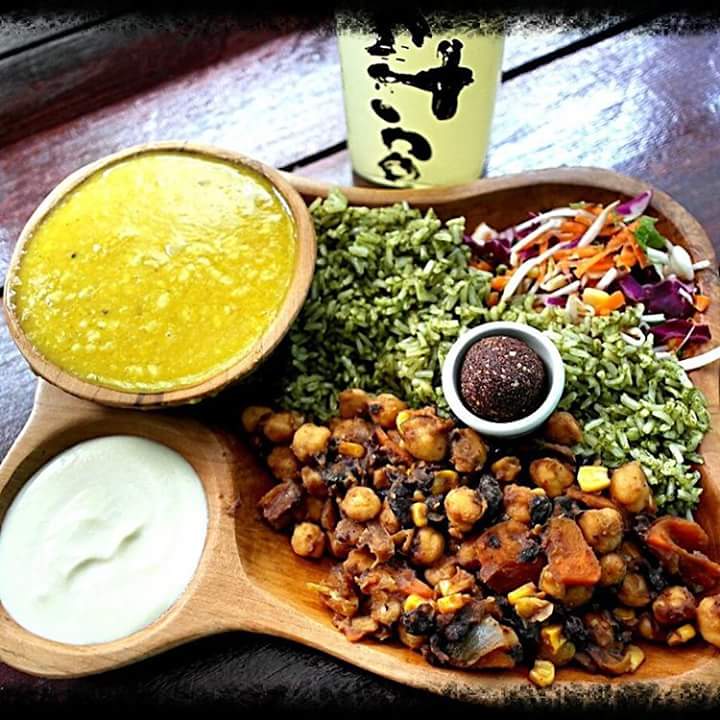 If you like Israeli food, be sure to stop in at The Green Gallery on your way to Agama yoga school. They have the best shawarma sandwich. They also make a copious breakfast with tofu scramble, mock-meat and Middle Eastern flavours. The whole menu is fabulous, so you’ll want to make repeat visits!

My favourite restaurant is Orion Healing Centre. Not only because I created most of the menu when I was working there, but also because I know how the food is prepared.

The restaurant is very busy all year long, so you can be sure that the food is fresh. Try the burgers, the bowls, the salads and the breakfasts! Everything on the menu is delicious.

The place is well known in the UK, because the TV show “The Retreat with Nick Knowles” was filmed there. The DIY SOS star came for a 28-day “vegan detox” holiday, along with 8 other participants in search of a way to improve their health. The results were astonishing. 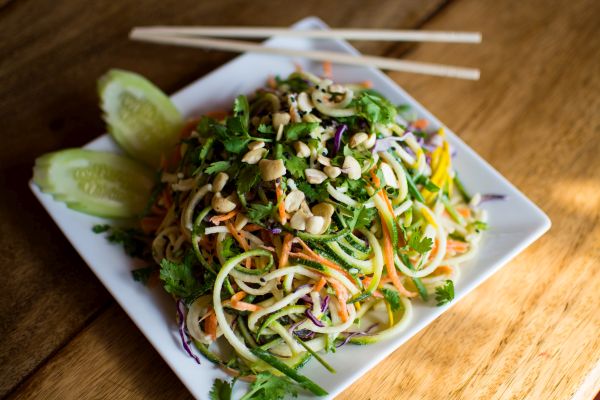 If you like Thai food, you’ll want to make a stop at Big Mountain restaurant. The green curry pizza is divine (ask twice for no cheese to be sure it’s vegan!). I was never able to decide which of their curries I prefer. Thai, Indian, Massaman, Penang, green curry - they are all super rich and creamy.

Another Thai venue I recommend is JJ Restaurant on Hinkong beach, where you can enjoy a meal watching the sunset. The view is just perfect! Try the fresh spring rolls with peanut sauce, the Burmese salad and the Penang curry. I was also very pleased with their veganized pad thai (you have to request that it be made vegan).

Want to help animals during your trip? Koh Pha Ngan is one of several places where you can volunteer with stray dogs in Thailand.

I have also lived in the craziness of Bangkok for almost six months, and in that time I had the chance to visit many vegan hubs. The one that I prefer the most for its food and ambiance is Broccoli Revolution, on busy Sukhumvit road near the Thong Lo BTS (Skytrain) station.

I recommend visiting on a Tuesday, because that’s when they have “2 for 1” specials on all juices and organic wines. Try their broccoli charcoal burger or a meal from the Thai menu. It’s delicious! 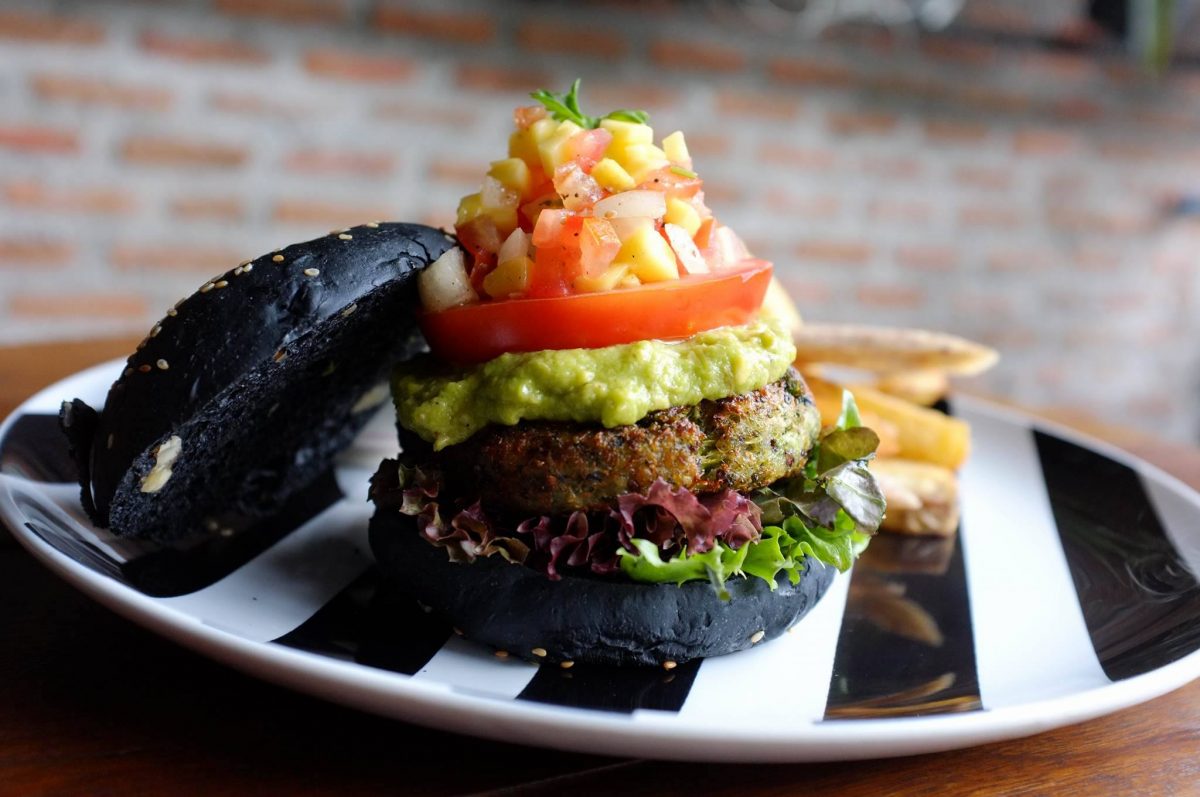 When it comes to Thai noodle soups, its worth the extra effort to travel all the way to the Ari BTS station and visit a vegan food court called Baan Suan Pai (Banana Family Park) that’s tucked down a hidden alleyway.

From the station, take exit 1 and walk 2 minutes towards the Esso garage. Take the alley on the right, just before the garage. Walk to the end of the alley to find the food court.

Chances are that you will not see any farang (Western tourists) there. They will give you coupons at the counter and then you can order from whichever restaurants you prefer.

I love the tom yum noodle soup from the second restaurant on the left (only 40 baht). I usually take a 60 baht plate at the last counter on the right side. She makes all sorts of mock meats that taste incredibly good.

***UPDATE May 2020***: The food court at Banana Family Park has sadly closed. However, most shopping mall food courts in Bangkok have vegetarian stalls that offer at least a few vegan options at rock-bottom prices. Two good examples are the MBK and Terminal 21 shopping malls. 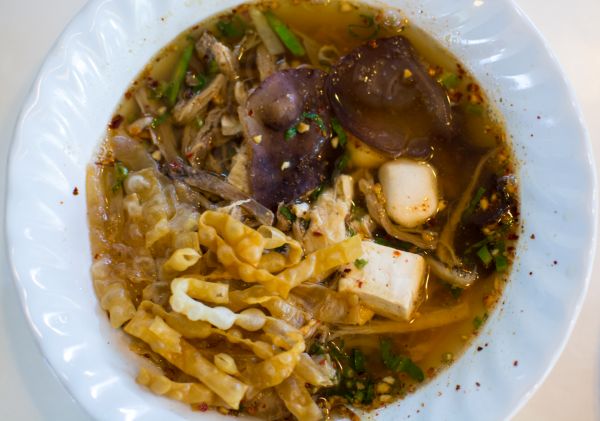 If you like Indian food, try Saras on Sukhumvit 20. There is no meat on the menu, but they do serve dairy products. Make your selection from among the vegan options listed on their menu, or you can even make a special request.

Everything is well marked, but it’s still a good idea to mention to the server that you want your meal vegan. This restaurant is always packed with Indian families because the food is amazing. The vegan dum aloo is fantastic!

If you like hummus and Middle Eastern food, there is an Arab street on Soi 3. Be aware, this is not a vegan area, but it is possible to find vegan dishes there. I’ve been many times to Nefertiti restaurant for a good hummus, baba ganoush, crispy falafels and a super cheap and tasty vegan naan bread.

At Asoke station, you will find May Veggie Home, where you can finally try all the veganised traditional Thai dishes! The spaghetti pat-dhee-maow, the pad thai and all the stir-fried dishes are pretty tasty. 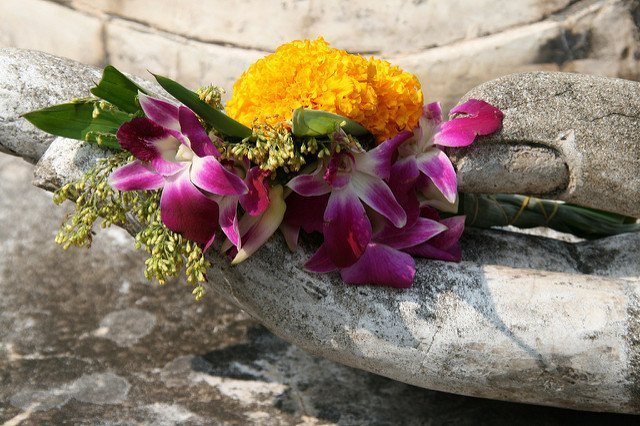 Thanks in part to its Buddhist heritage, Thailand is a paradise for vegans

Also located at Asoke station, Pala Pizza makes the best vegan pizza I’ve ever had. You can get it by the slice, but don’t make that mistake, get the half meter! Call before going to ask if they are making the veggie pizza, because they don’t make it every day.

For desserts, Bangkok vegans are all about Veganerie, but personally I was not impressed. It’s overpriced, and the cakes are just not that good, though the cinnamon bun is to die for. 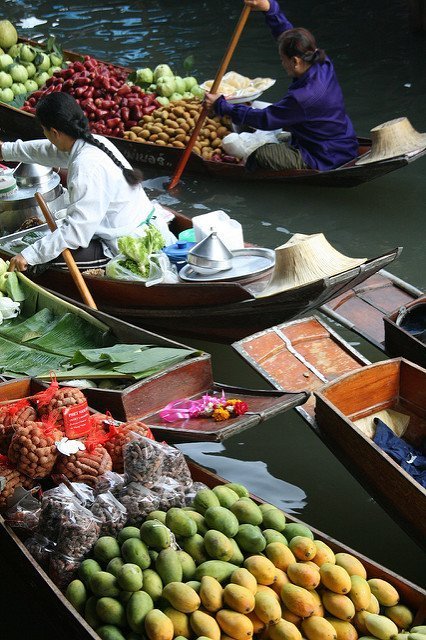 Fruit is always in abundance in this tropical locale

I definitely prefer going to the fruit buffet at the Baiyoke Sky Hotel for “all you can eat” DURIAN! At the 18th floor, there is a 350 Baht buffet that gives you a 1.5 hour to eat as much fruit as you want….and there is durian! If you are still able to walk after, go to the top of the hotel to see Bangkok from above. It’s quite impressive! 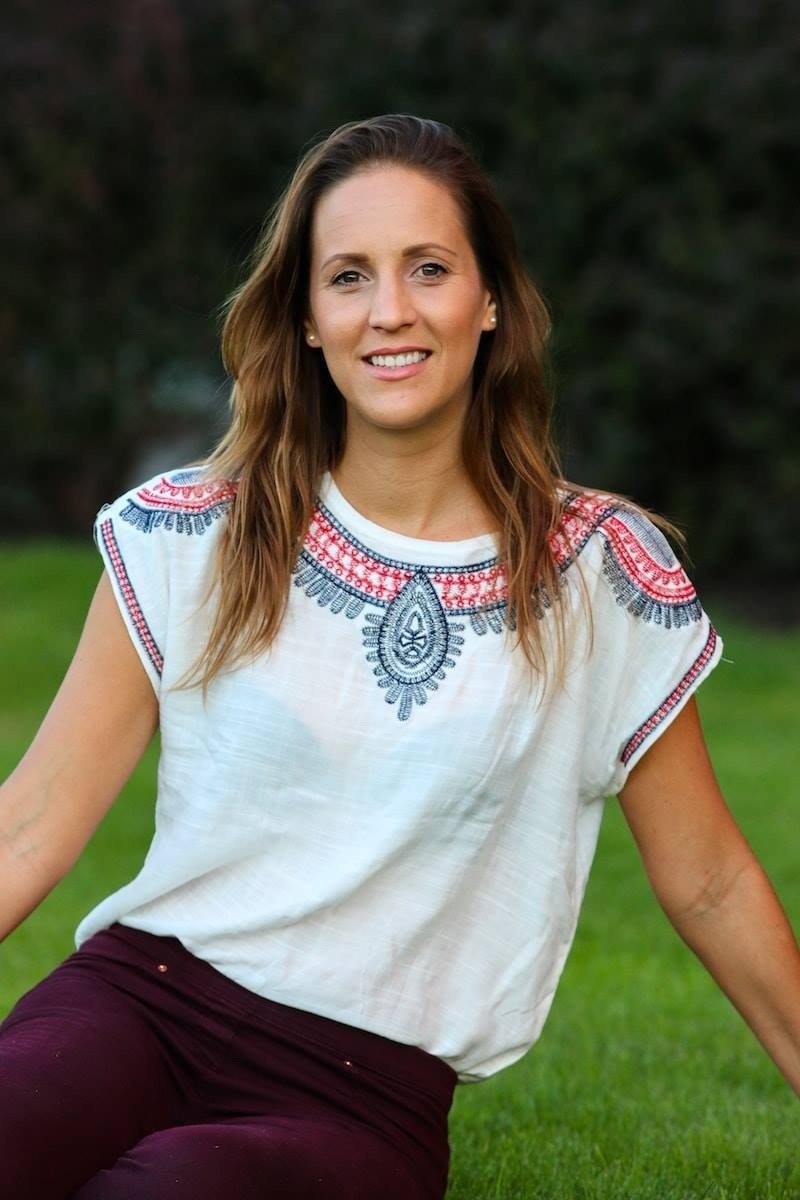 Dominique Julien is a naturopath and health coach who specializes in detox programs. She promotes a healthy plant-based diet to prevent or treat common illnesses. She is the creator of OmDetox.com. 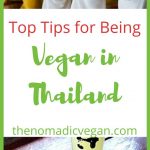 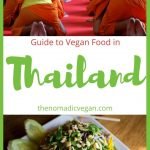