A Vegan Hike along Hadrian’s Wall 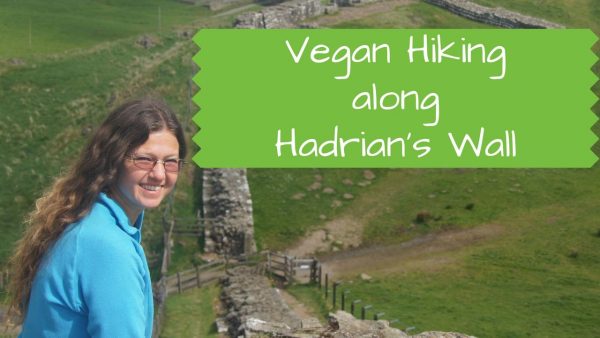 Hadrian’s Wall stretches all the way across northern England and is the perfect destination for a hike through the English countryside. 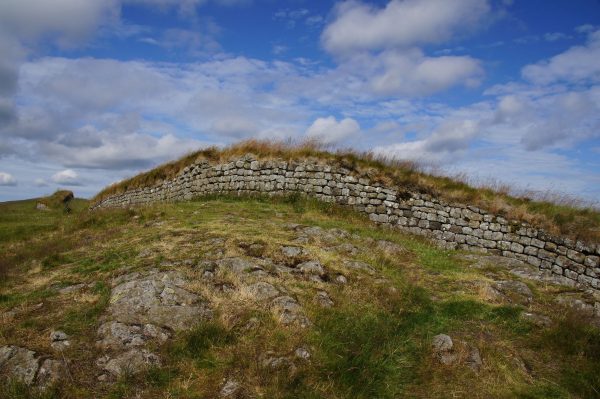 And of course, you can make it a vegan hike!

While there are only a few eateries along the way, they will be more than happy to prepare a vegan meal for you if you give them a little advance notice.

UK supermarkets are also well-stocked with plenty of vegan take-away items, so self-catering as a vegan hiker couldn’t be easier.

Based on my own experience walking alongside Hadrian’s Wall, here are my top recommendations for accommodation, eating out, and self-catering.

Watch the video to see some of the delicious vegan food you can look forward to!

Where to Base Yourself for your Vegan Hike

Hiking the entire length of the wall takes about six days. If you don’t have that much time, the small city of Hexham is near the most famous stretch of the wall.

It makes a great base for exploring different sections of the wall over a two- or three-day period.

By making use of the convenient AD122 hop-on hop-off bus service, you can easily visit places like Housesteads Fort and Chester’s Fort and see ancient barracks where Roman soldiers lived.

Be sure not to miss the communal latrines, which are notably lacking in stall walls or doors!

Milecastles punctuate the wall at every mile (every Roman mile, that is) and are also worth a quick stop. 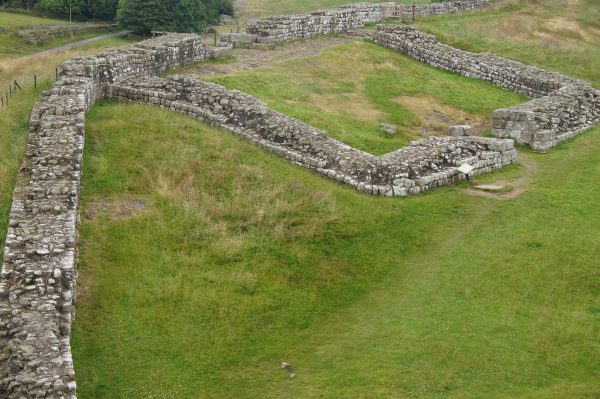 If you only stop at one of these, make it Milecastle 42. Climb up the nearby ridge for a wonderful bird’s eye view of the milecastle, then stop in at the Milecastle Inn for lunch (see the “Where to Eat While on your Vegan Hike” section below).

Where to Eat in Hexham 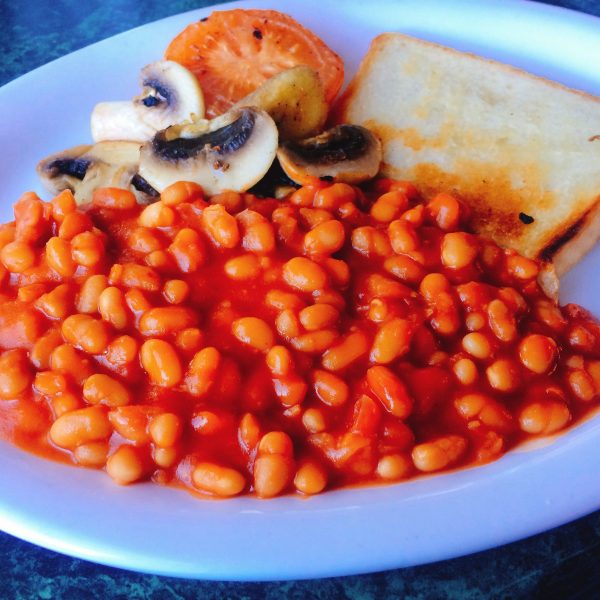 I stayed at this typical English inn, where breakfast was included in the price of the room. Vegan breakfast options are plentiful and include baked beans, mushrooms, grilled tomatoes and fried or toasted bread.

A selection of cereals is also available, but there are no plant-based milks. You could ask when booking if they can provide vegan milk, or just bring your own. Powdered soy milk is very handy for traveling and can usually be found in any Asian grocery store.

The Station Inn is conveniently located very close to the Hexham train station. There is also a large Waitrose supermarket nearby, which is perfect for stocking up on picnic supplies and snacks for your vegan hike. 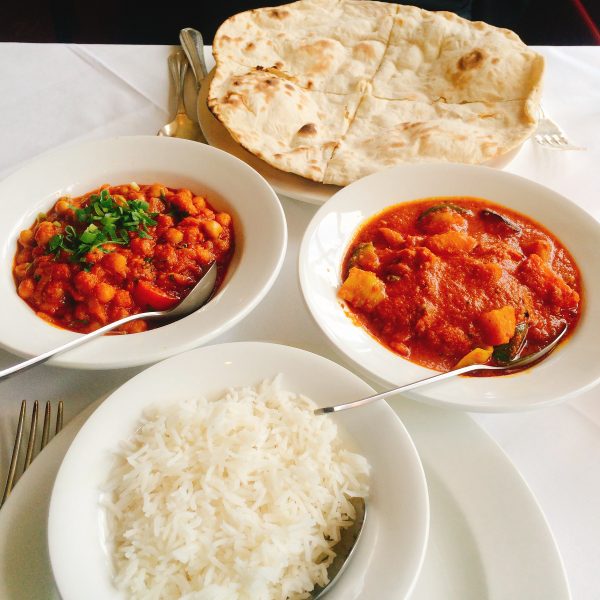 UPDATE April 2019: It seems the folks at Valley Connection are making big changes to their restaurant in Hexham. Their new venture will be an Indo-Latino tapas bar called Cilantro. Check their website for the latest updates.

This Indian restaurant is centrally located right next to the Abbey. The menu of curry dishes is organized by sauce type, and all sauces can be ordered with vegetables instead of meat, so there are plenty of vegan options.

Some curry sauces contain cream or other dairy products, but many don't. Just ask your server, and make sure the kitchen staff cook your dish with oil instead of ghee.

On the menu, the sauces are divided into three sections: mild, medium hot and very hot. Choose a “very hot” sauce only if you really like spicy food.

In addition to the standard curries, there is also a list of traditional vegetarian dishes at the back of the menu. I recommend the channa buna accompanied with roti bread. The latter is more like naan than chapatti and is great for mopping up the flavorful sauce. 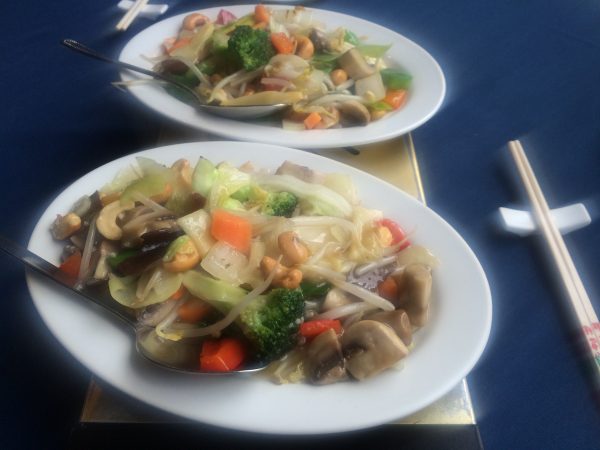 This Cantonese restaurant has 10 or so vegetarian dishes listed on the menu. The food they serve pretty standard Chinese fare.

The “mixed vegetables with cashews in satay sauce” is not as exotic as it sounds, unfortunately. Something seems to have been lost in translation, because this is definitely not the peanut-based satay sauce you’ll find in Indonesia.

Instead, it’s a pretty typical Chinese vegetable stir-fry. It makes for a satisfying and pretty healthy meal, but it’s nothing out of the ordinary.

Where to Eat While on your Vegan Hike 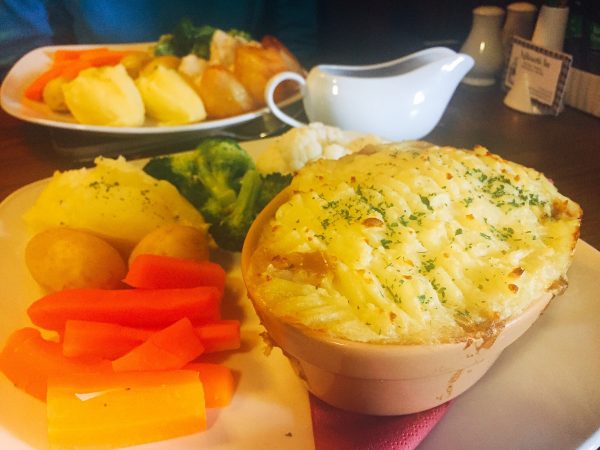 The friendly owners of this inn and attached pub are very happy to cater to vegans with advance notice.

In response to the email I sent, they suggested about five different dishes that they could prepare for my husband Nick and I and asked us which ones we would prefer.

Since we were there on a Sunday, I opted for the veggie version of a traditional Sunday roast. This was a huge plate of veggies with a vegan gravy made especially for me.

Nick chose the cottage pie, which consisted of tofu and vegetables in a rich gravy, topped with mashed potatoes. They even surprised us with strawberries and non-dairy cream for dessert!

The pub has a great atmosphere and is highly recommended. Be sure to let them know you’re coming so that they can prepare something special for you. 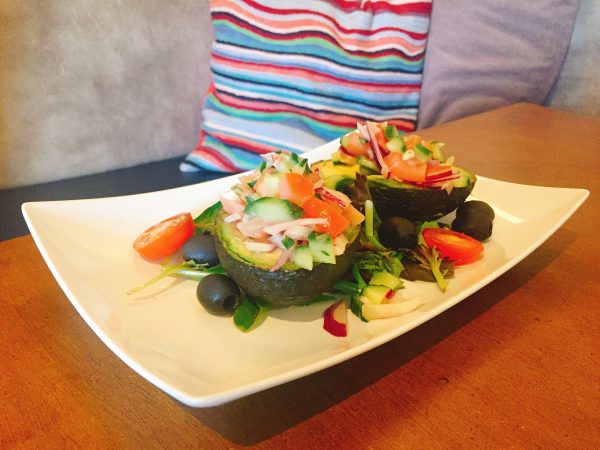 The staff at this inn and pub also enthusiastically promised a vegan meal when I emailed them, though they didn’t specify what it would be.

When we arrived, we were served an avocado salad, which was basically a whole avocado cut in half and stuffed with raw vegetables.

It wasn’t quite what I was expecting, but it was more filling than it looked, so I was satisfied with it. We also ordered from the menu a portion of potato skins, which came with a sweet chili sauce.

After our visit, I was told that their veggie burger is actually vegan, whereas I had initially been told that it wasn’t. The staff did say that they are working on expanding their vegan options, so you may find more choices on the menu when you visit.

So now you're ready for your vegan hike along Hadrian's Wall. Happy trails! 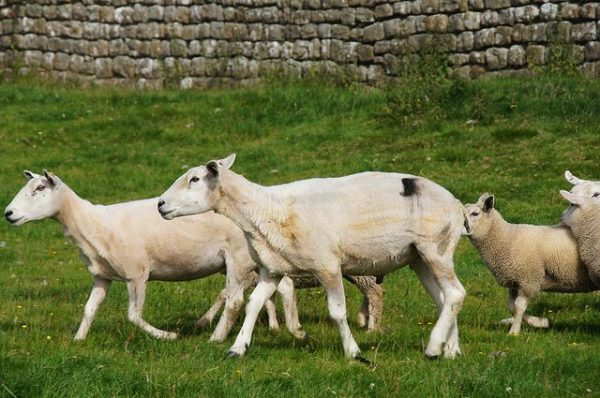 Wanna go for a hike with us?

By the way, did you know that my husband and I host a podcast? Listen to episode #28 of En﻿﻿glish in 10 Minutes to hear more about our vegan hike alongside Hadrian’s Wall and about the Wall itself.