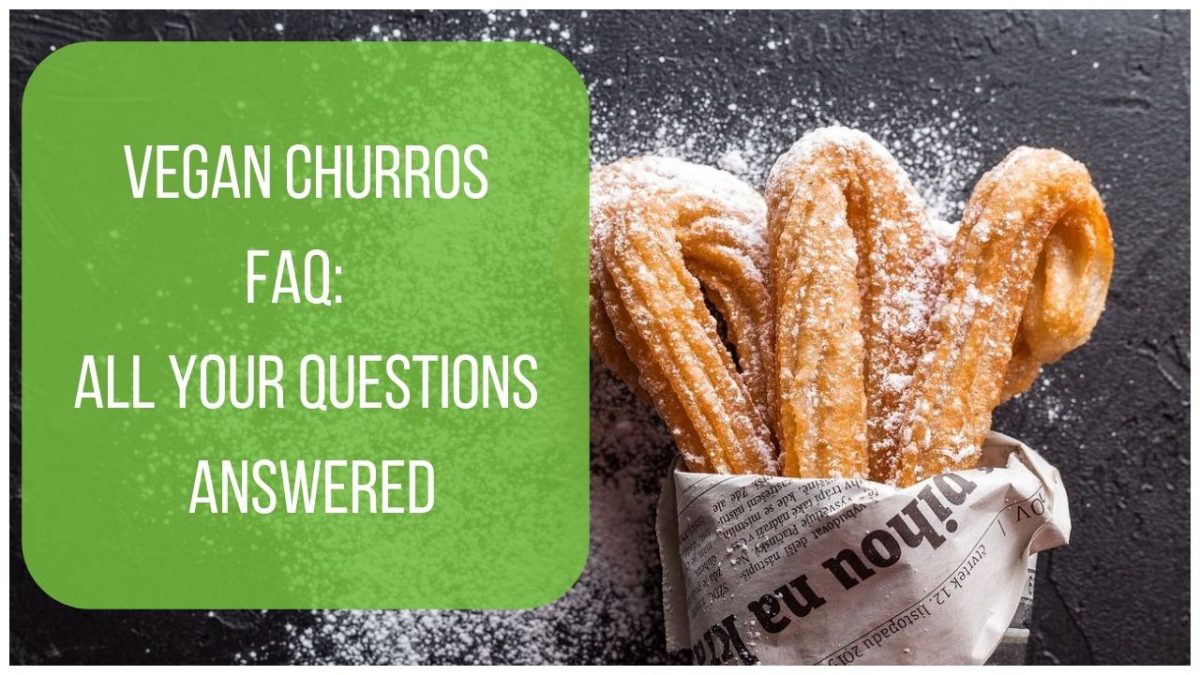 How hard is it to find vegan churros? Much easier than you might think! But first things first. Let’s start by explaining what a churro is, then we’ll find out if it’s vegetarian or vegan.

What is a churro?

Churros are long sticks of fried dough that are sprinkled with sugar, and sometimes also with cinnamon. They are made by piping the dough into a vat of olive oil or another type of vegetable oil that has been heated on medium heat. The dough is then fried in the oil until it’s golden brown and crispy.

In Spain, churros are eaten for breakfast and are dunked in a cup of coffee or, more commonly, hot chocolate. The hot chocolate served in Spain is incredibly thick and is really more like a chocolate sauce than a drink. 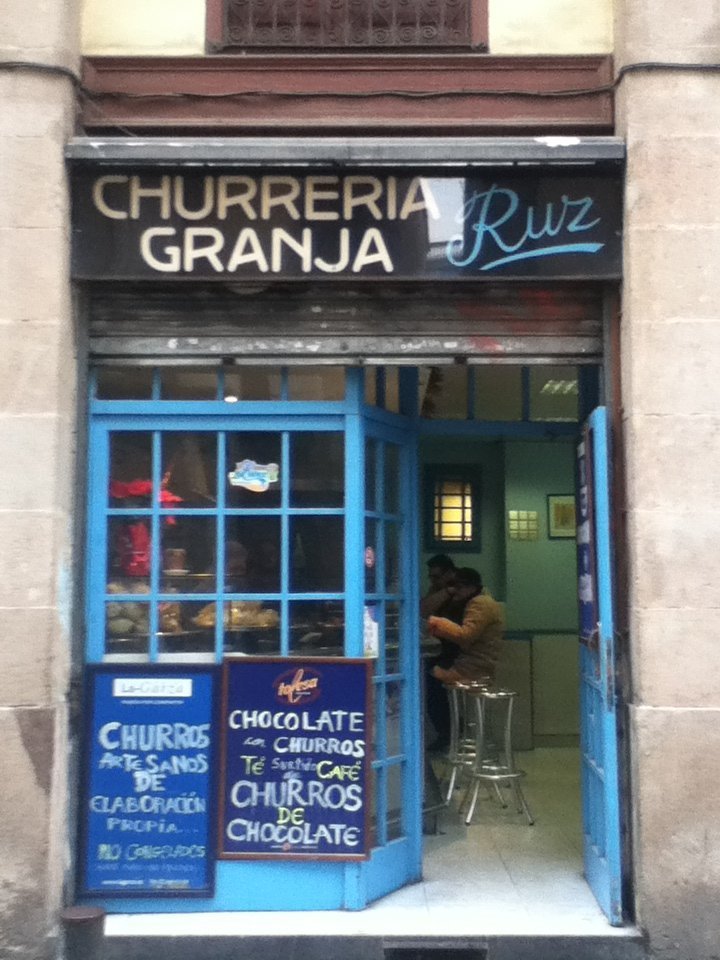 A typical churrería in Spain

However, in Portugal and many Latin American countries, churros are a common street food and are sold at makeshift stalls, especially during fairs and festivals.

In these countries, churros are viewed more as a snack than a meal. They have also become increasingly common in English-speaking countries, including the United States, the United Kingdom and Australia.

Churros are certainly not a health food, but they are a delicious treat enjoyed all over the world, especially in Spanish and Portuguese-speaking countries. You can read more about the history of the churro here.

What is churro made of?

The traditional Spanish recipe for churro dough calls for just three ingredients: flour, water and salt. This batter is piped through a special tool called a churrera, which gives the churros their distinctive ridges. If you’re making them at home, you can just use a piping bag (also called a pastry bag) with a star tip attachment.

Different shapes can be made when piping the churros. In Spain, they are usually either left in long, straight lines or curved so that the two ends touch. But in other parts of the world, you might see two lines of dough twisted around each other to create a spiral shape. 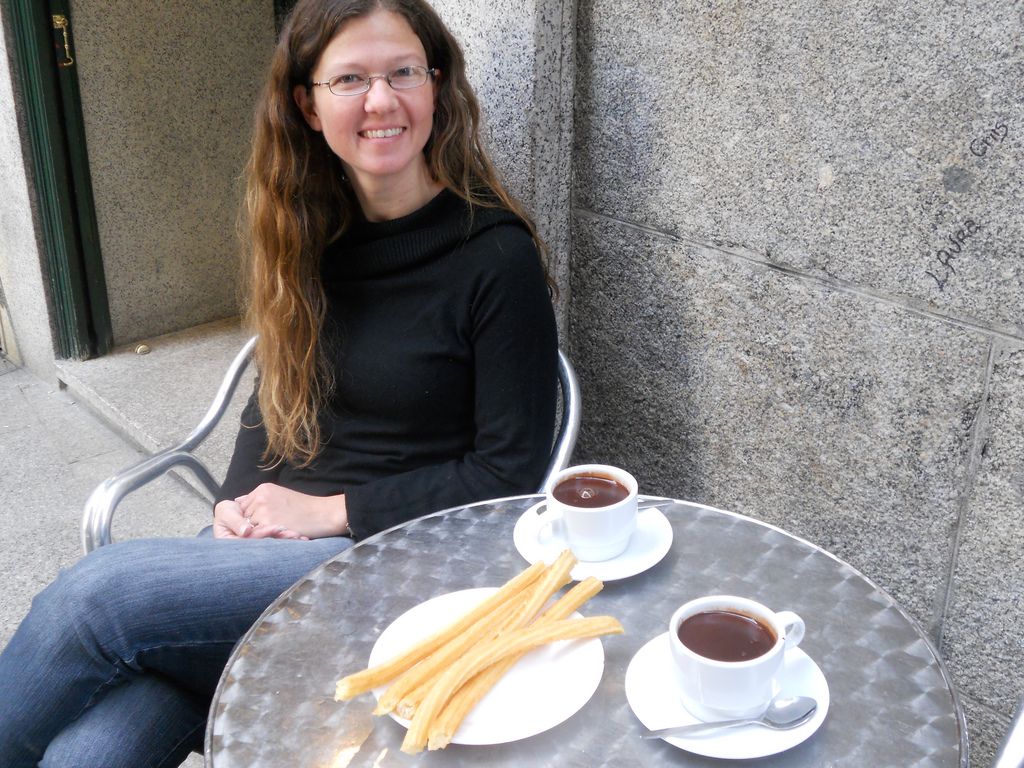 Me enjoying churros in Madrid. These churros were left in long, straight lines.

Churros in Spain usually do not contain eggs. It’s always best to ask to be sure, though. Particularly in Mexico and other Latin American countries, there have been many adaptations of the original churros recipe since it was first introduced by the Spanish during colonial times.

While older, more traditional recipe books in Mexico call for the same three ingredients as the Spanish churros recipe, in recent decades many cooks in Mexico have started adding eggs to the dough, because they find it’s easier to work with. Some even add milk or butter, or both.

What are churros filled with? 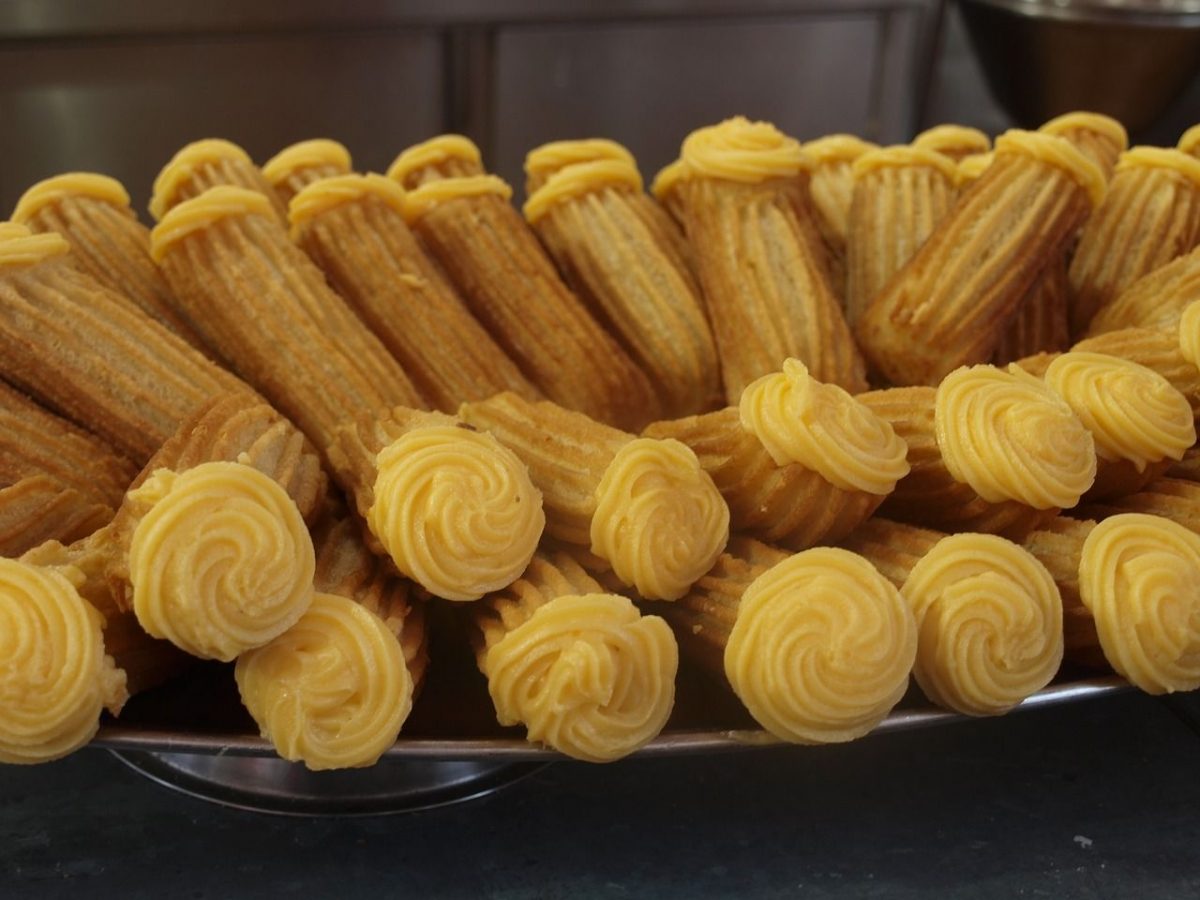 Churros with filling. Most fillings aren't vegan, though you might find guava or other fruits.

In Spain, churros are usually not filled with anything. Instead, the plain dough is dipped in hot chocolate to give it flavor.

But in countries where churros are sold as a street food snack, the tradition has been adapted to make churros more practical for eating on the go. A hollow hole is left in the center of the churro, and this is filled with some kind of sauce or paste.

Often, these fillings contain milk. In Mexico, for example, common fillings include dulce de leche and cajeta, which is sweetened, caramelized goat’s milk. But in Cuba, guava and other fruits are used as a filling, and these are free of all animal products.

You may wonder why this is even a question. Surely there’s no meat or fish in churros?? No, but some cooks in Mexico do use lard (pig fat), which is called “manteca” in Spanish.

So, if churros are made with manteca, then they are not vegetarian. Mantequilla, on the other hand, means “butter”. So, any churros made with mantequilla would be vegan, although they would still not be vegan. Which leads us to our next question …

It’s funny, I’ve come across lots of recipes on the web for vegan churros that call for fancy ingredients like coconut oil, brown sugar, vanilla extract and vegan butter.

But you don’t need any of that stuff to make churros! It really is one of the simplest recipes in the world. All you need is flour, water and salt, some olive oil for frying, and some sugar for sprinkling on the finished product. 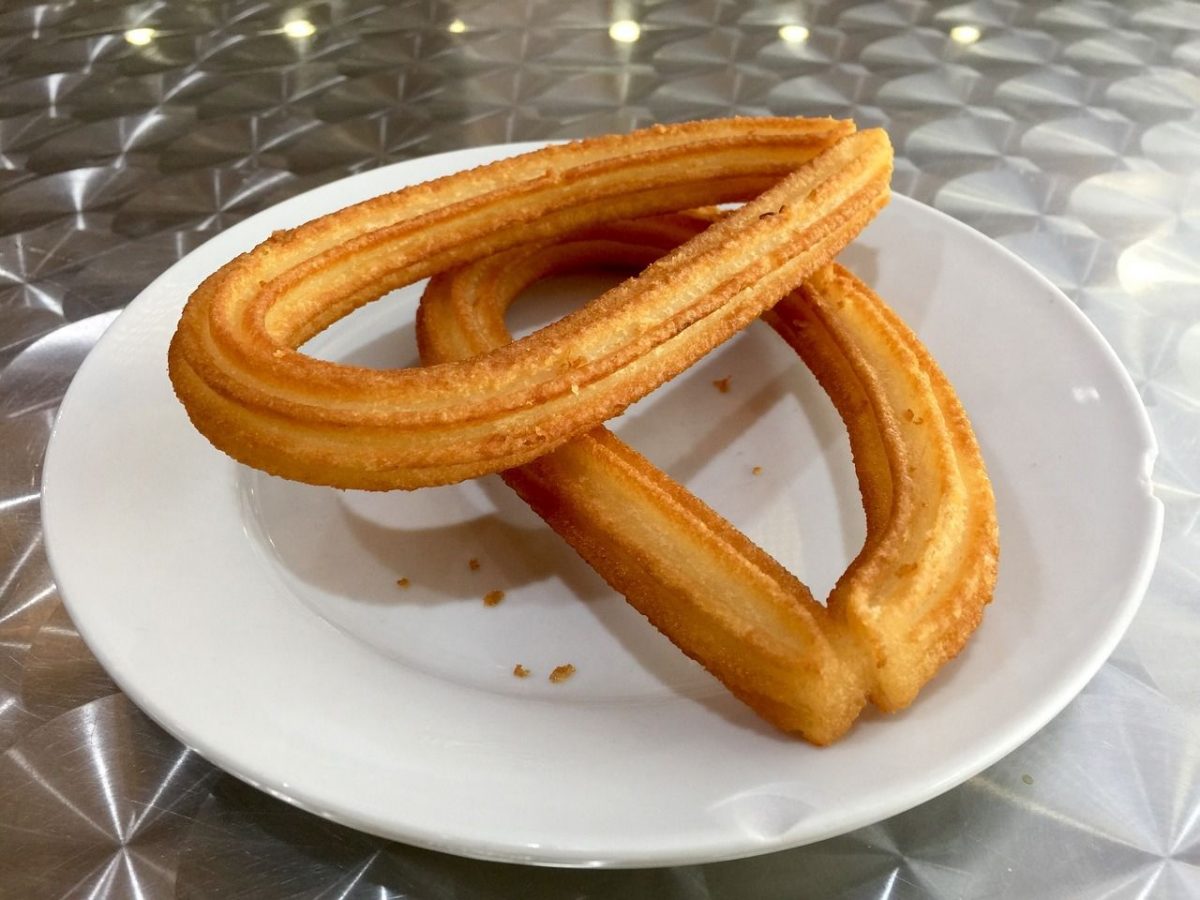 Churros may be vegan, but they're definitely not gluten free.

No. Normally, churros are made with regular wheat flour, so they are definitely not gluten free. There are some gluten free and vegan recipes for churros out there on the interwebs, so you could have a go at making them yourself.

But when eating out, you can expect that any churros you come across will contain gluten, unless you are at a specialty gluten-free restaurant.

Both! Churros originated in Spain, and then the Spanish colonizers introduced them to the New World. They are popular in many Latin American countries, including Mexico, Cuba, Venezuela, Colombia and Peru.

Yes! Tesco, a popular supermarket chain in the UK, has recently started selling frozen vegan churros filled with a chocolate and hazelnut filling. This is just one of many plant-based products that Tesco has launched in the past year.

In the UK, Taco Bell sells churros. Sadly, these are not vegan. According to the ingredients listed on their website, they contain milk.

However, in the US, instead of churros Taco Bell sells something kind of similar called cinnamon twists. Admittedly, these are not as good as churros, BUT they are vegan.

In Australia and New Zealand, Domino's Pizza offers oven baked churros for dessert. Unfortunately, these are not vegan. According to the allergen information listed on the Domino’s website, they contain both eggs and milk.

However, San Churro Chocolateria, which is a popular chain in Australia, does sell vegan churros. Their churro dough is vegan by default, and they also have vegan dark chocolate and vegan cookie butter dipping sauces!

There’s even a menu item called The Happy Vegan, which is a handmade churro bowl rolled in cinnamon sugar and filled with vegan salted caramel and honeycomb gelato, topped with fresh strawberries and smashed Oreos. Yum!

Are churros vegan at Disneyland?

No, the churros sold at Disney are not vegan. According to the ingredients list, they contain both eggs and milk derivatives.

Where can I get vegan churros in Madrid?

Ever since we arrived in Spain yesterday morning, we’ve had an epic two days of eating. It started in Madrid with these vegan churros and hot chocolate from @losartesanos1902 and ended in Oviedo with a vegan brownie and ice cream. ? ? . Tomorrow we start walking the Camino Primitivo, so our meals are about to get a lot simpler. Actually, our lives in general will be a lot simpler, which is kind of the point. I’m oscillating between anticipation and trepidation, hoping that my feet hold out and that my plantar fasciitis doesn’t flare up too much. I’ll be posting stories every day from the Camino, so follow along to see what we find to eat and what we experience along the way! Ultreia!

While most churros sold in Spain are vegan, the challenge comes in finding a vegan hot chocolate to dunk them in. Generally, the hot chocolate sold in churrerías and chocolaterías in Spain contains cow’s milk.

I once came across a place in the Barri Gòtic neighborhood of Barcelona called Churreria Granja Ruz that sold churros covered in vegan dark chocolate. This was a great solution to the hot chocolate problem, but that churrería has sadly closed.

But don’t lose hope! If you go to Madrid, you can have the full chocolate and churros experience there. There’s a lot of hype about how vegan-friendly Barcelona is, but in my experience, Madrid is the best city in Spain for vegans. The vegan movement there is booming!

There is one chocolatería in Madrid that serves a milk-free dark chocolate to go with their churros. It’s called Los Artesanos 1902, and yes, they’ve been serving churros here for more than 100 years!

This place is full of history and has been run by the same family for five generations. Ask for the chocolate negro (dark chocolate). They make two different kinds of churros here; the classic churros and a fatter type, known as porras. Both are delicious! 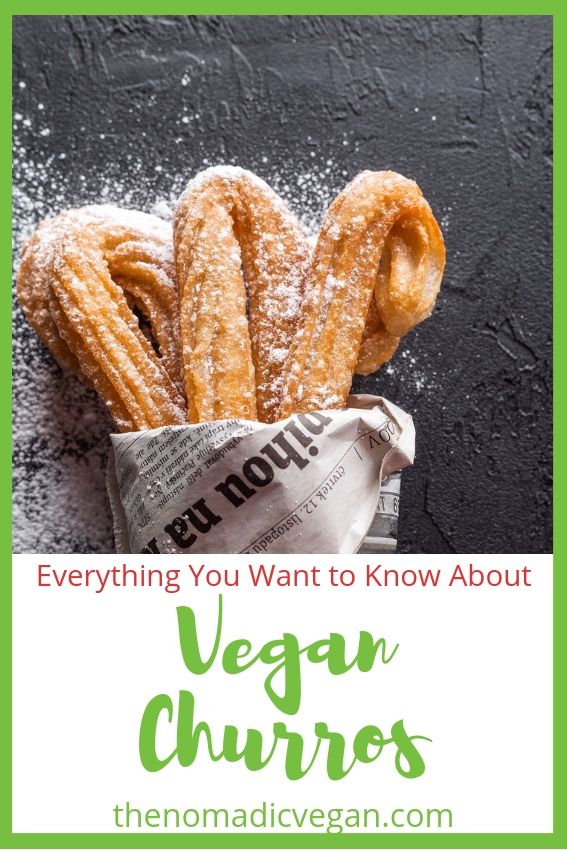