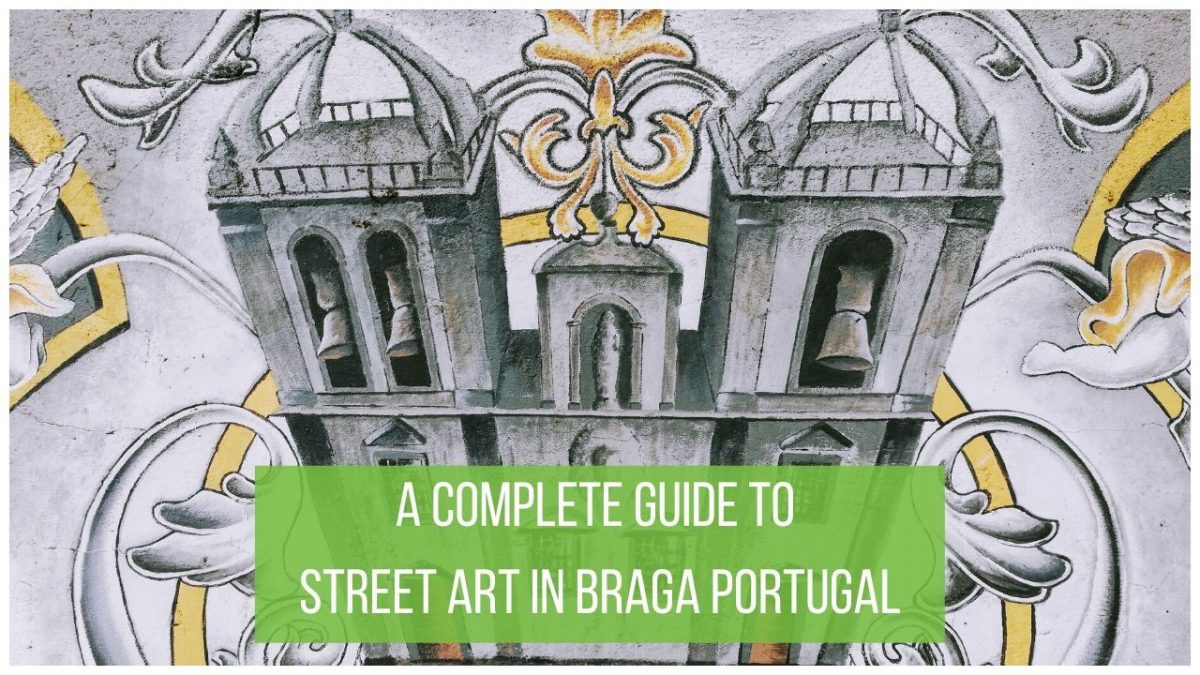 Street art has become a big passion of mine over the past year, so you can expect to see more street art guides appearing on this blog. Granted, a guide to Braga street art might seem like an odd place to start.

To be frank, Braga is definitely not the street art capital of Portugal. Lisbon, Porto, and even smaller towns like Faro and Lagos have more to offer.

And while I do plan to publish articles here about street art hot spots in Portugal, I don’t feel ready to do so yet. It’s just such a massive undertaking! Even though I live in Lisbon, there’s so much amazing art there that I’ve yet to discover.

So for now, let’s start with a city whose art scene is a bit more manageable. The street art in Braga is fairly understated. You won’t see any huge, multi-story murals here. And if you limit your explorations to the historic city center, you may wonder if the city even has any street art.

After spending five days exploring Braga, I’m happy to tell you that yes, it does! And not only that, hunting for street art quickly became one of my favorite things to do in Braga.

Here are six places in Braga that are worth seeking out if you’re into street art. Most of them are just outside the city center, but still close enough to reach on foot. 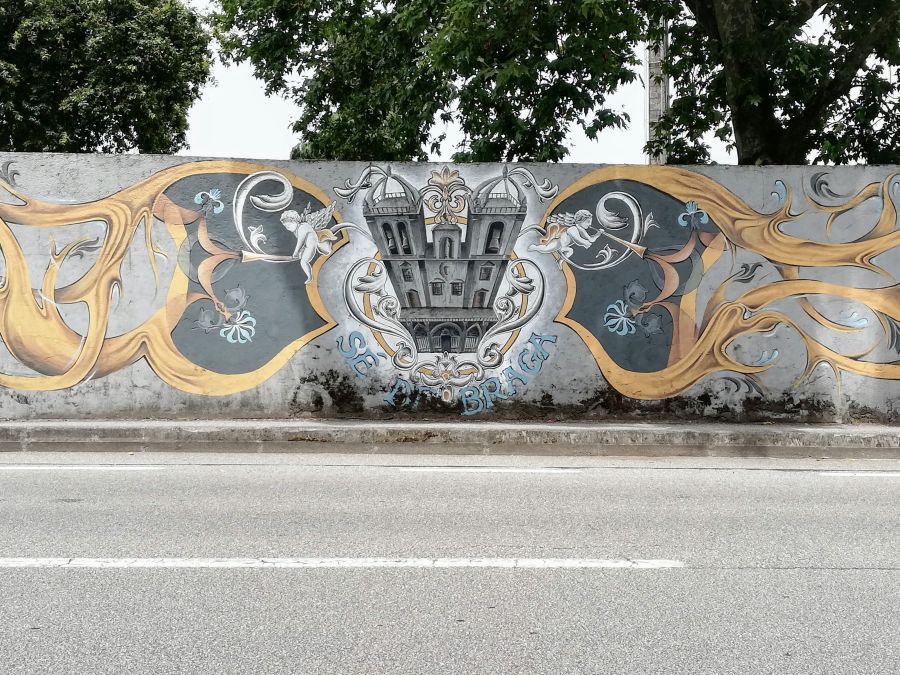 Mural depicting the Braga Cathedral outside the campground

At the entrance to this campsite, there’s a large wall with several murals celebrating the national cultural heritage of Braga.

The city’s most famous monuments are depicted, including the Cathedral, the Bom Jesus do Monte church and the hydro-powered funicular that takes visitors up the hill.

There’s a large mural that I initially mistook for a tag, but it actually spells out “Tibães”, which is the name of a monastery about six kilometers outside of Braga.

Most of the murals were painted by Bruno Guedes, a talented local artist from Braga. Check him out on Instagram. My favorite mural, though, is one of the Braga Cathedral viewed from above. It’s a joint work by Rafael Alves and Eduarda Maia.

This was my favorite street art spotting site in Braga, at least in terms of the artwork. It’s in a terrible location, though, on a curve of a busy highway.

Street art photography here can be really freaking dangerous, so please be very careful if crossing the street or stepping out into the lane to snap a photo. 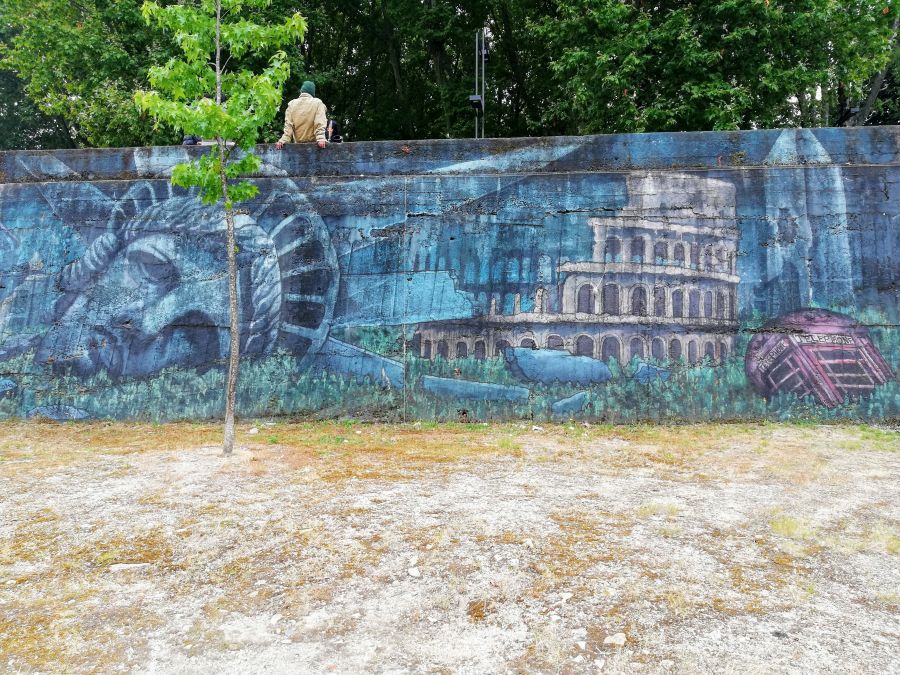 "Disasterpiece" is a commentary on the future of humanity

The Ecovia do Rio Este is a lovely cycling and walking path that runs alongside a small river for several kilometres. At the point where the ecovia crosses under the Avenida da Liberdade, there’s a wall that was painted by a group of artists in 2016.

The overall theme of the wall is “painting the future”, and it includes murals by well-known Portuguese artists like Violant, Smile and Youthone.

My favorite of these is “Disasterpiece” by Violant, which I appreciated even more after I read the story behind it on his Instagram account.

Depicted are vestiges of human civilization lying in ruins, including the Statue of Liberty in New York, the Eiffel Tower in Paris and the Colosseum in Rome. It’s a reflection on how we could have done so much better with what we’ve been given.

But the name “Disasterpiece” also has a more personal meaning for Violant. Whereas most of the other artists painted with spray paint, he works with brushes and rollers. And the old concrete wall, covered in moss and full of holes, made it especially difficult to use this technique.

When all the other artists had left, Violant's mural was still unfinished. He stayed there for another two weeks trying to salvage it. With the help of some materials left behind by Youthone, he managed to create what I think is the best of the whole lot of them.

This mural is pretty small by Violant’s standards, as he often paints on a massive scale. To see a much larger work of his, visit the Quinta do Mocho neighborhood outside Lisbon.

Other Murals on the Ecovia 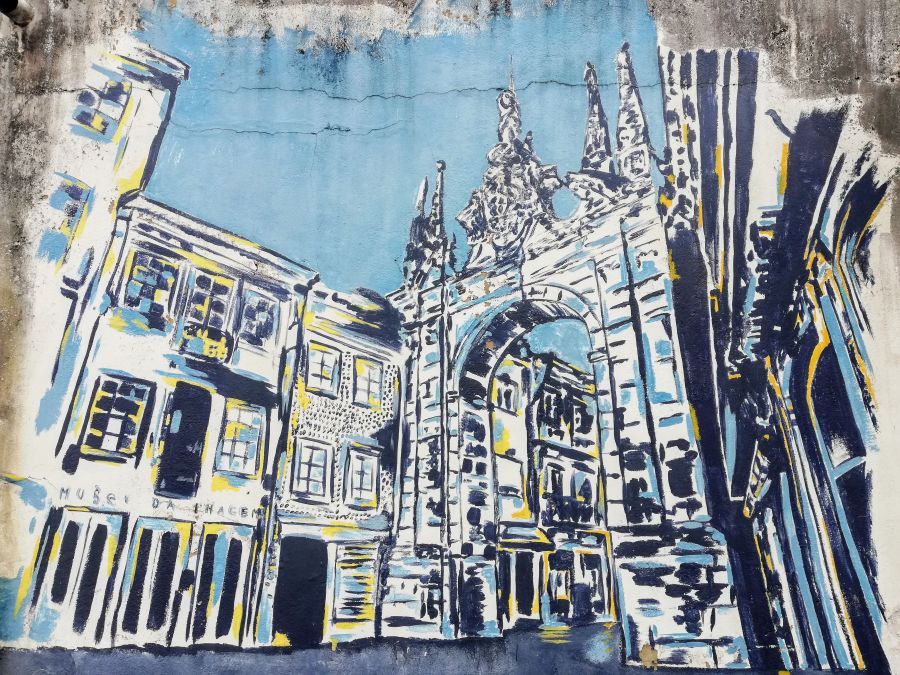 If you walk along the ecovia you will see a few more murals and tags. The only one that really stuck out for me, though, was this street scene featuring the Arco da Porta Nova. I believe this is Bruno Guedes’ work. 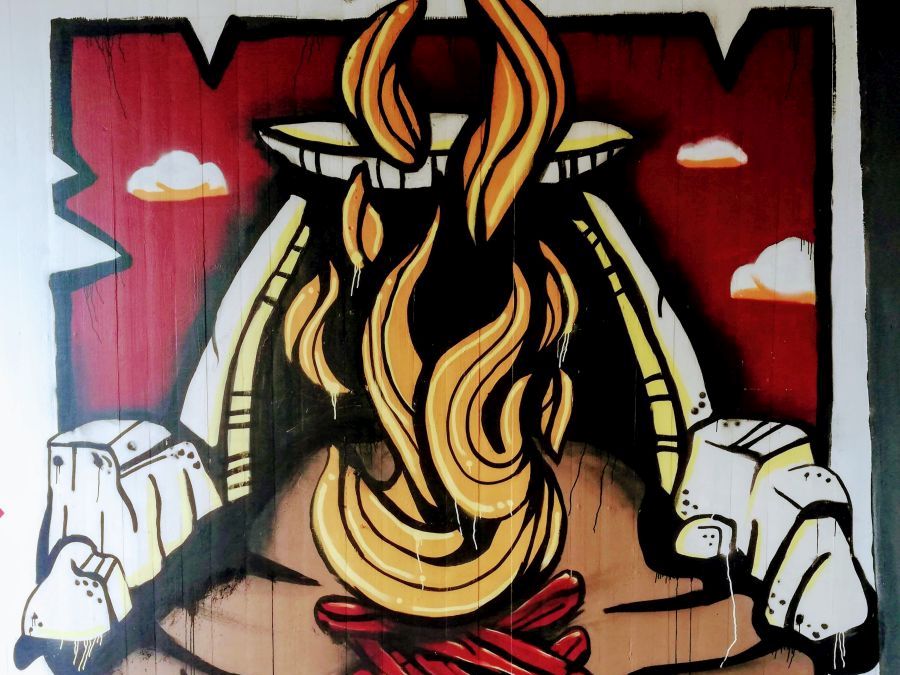 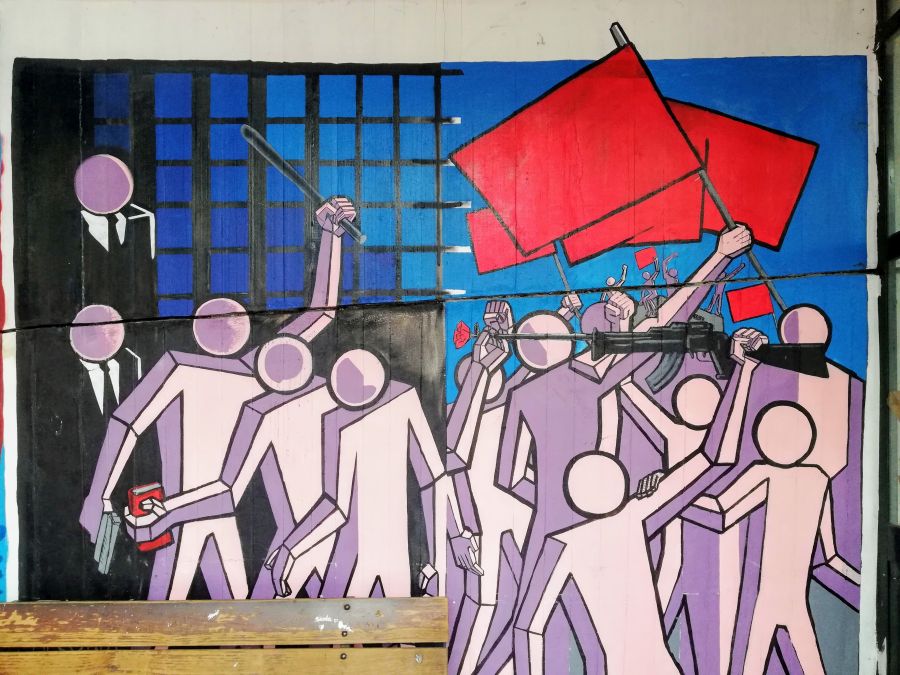 Inside the Braga bus station, there’s a series of murals depicting the entire history of Braga.

It starts with a depiction of the Mamoa de Lamas – a megalithic monument just outside of Braga that dates from around 3000 BC.

The narration then continues through Braga’s successive occupation by Celtic tribes, the Roman Empire and the Visigoths, and finishes with the Carnation Revolution of 1974.

Not all the murals are of great artistic quality (notice the dripping paint on the Mamoa de Lamas), but it’s a cool concept and a great way to learn something about this city’s illustrious history.

There are also a few other murals on the outside wall, although these are more damaged since they are exposed to the elements. The most interesting one is by silkarte, another local Bracarense artist.

It depicts the red and yellow trams that used to run through the streets of Braga from 1914 to 1963. Portuguese trams are delightful, and the ones in Lisbon have become a popular tourist attraction. It’s a shame that the ones in Braga were removed. 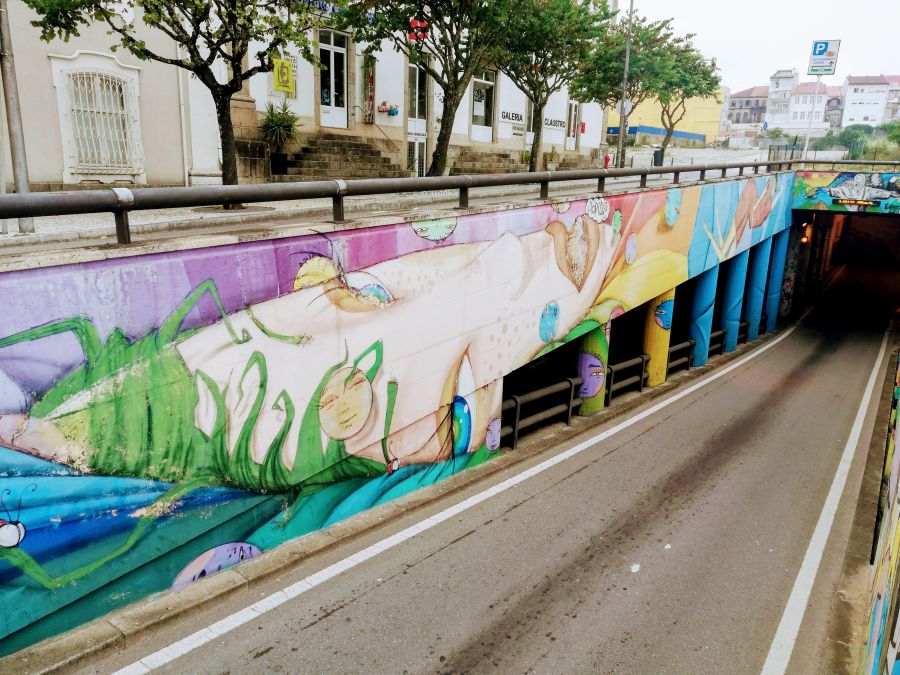 A Utopia mural with his signature female face and bubble heads

The three sites listed above are the best ones for street art in Braga by a wide margin. If you have more time, here are some sites of lesser importance.

The first is a tunnel that leads down into an underground parking lot. It’s decorated by works from two Brazilian artists, Utopia and Marcio Bahia.

Utopia has spent a lot of time in Portugal, and you can see his work all over Lisbon and other Portuguese cities. He has a gigantic mural in Lisbon’s Quinta do Mocho that spans across multiple buildings.

For anyone familiar with Utopia's work, the big-eyed, freckle-faced woman and the little bubbles with faces will be recognizable straight away. He's actually one of my favorite artists, but this mural was painted in 2016, and unfortunately, it hasn’t aged that well.

The woman’s mouth seems to have fared the worst for some reason, but the rest is in reasonable shape. Next to Utopia’s mural is another lounging woman, this one by Marco Bahia. 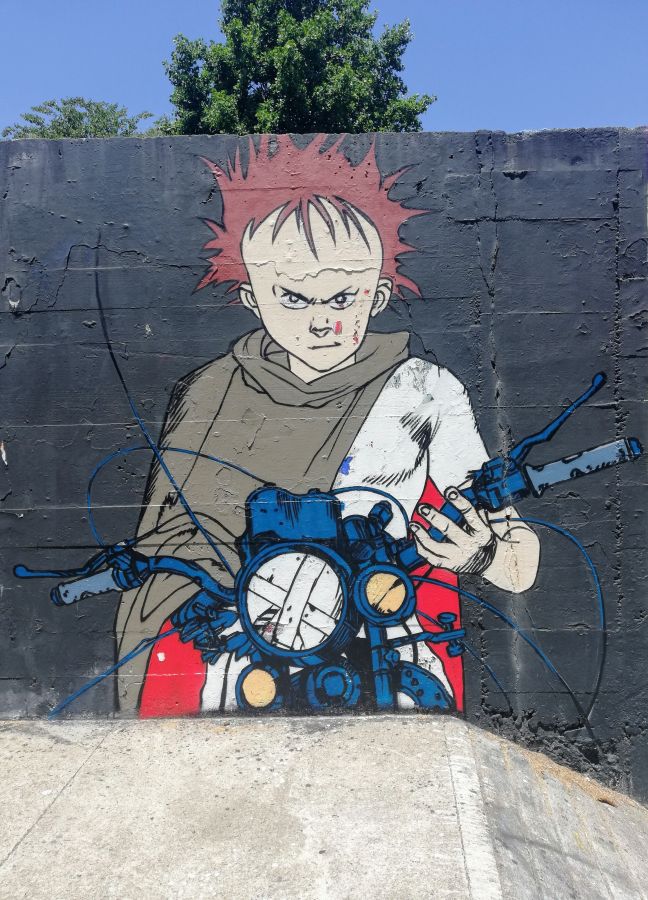 If you visit the Dom Diogo de Sousa Museum of Archaeology while you’re in Braga, step across the street to check out the skate park next door. There’s plenty of street art here, though I found most of it uninspiring.

It’s mostly tags and Japanese manga/animé characters, neither of which I’m really into. Kind of like painted animation lane in Taichung, Taiwan, but not as good.

Still worth a quick look, though. On the hill above the skate park is the Colinatrum Café, which is a lovely place for a drink. 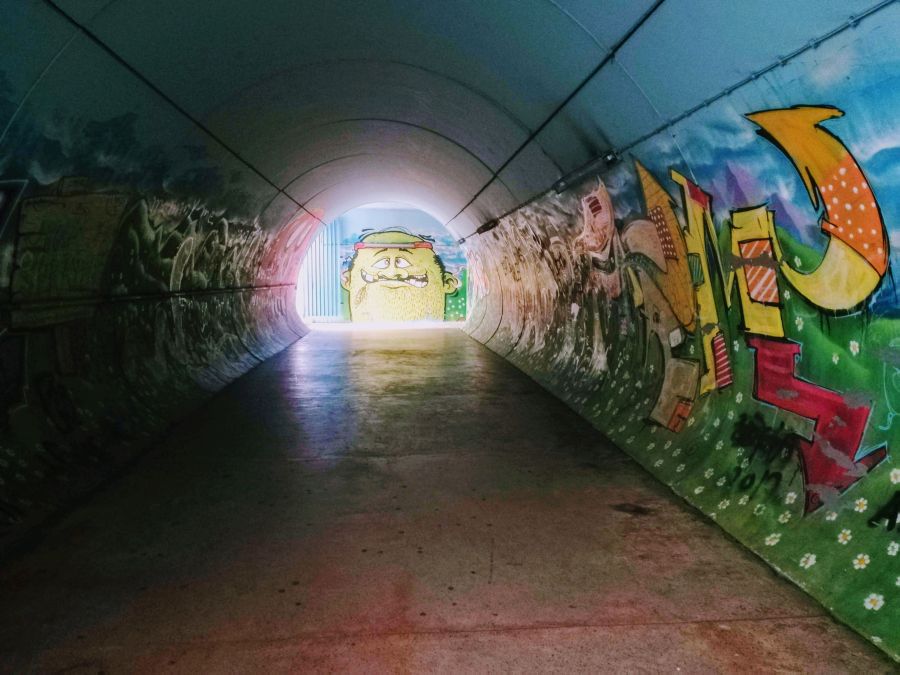 Avenida da Liberdade is the main shopping street in Braga and eventually becomes the N101 highway. At some intersections, there are underground passageways for use by pedestrians.

The two that I found were both covered in artwork, although most of it was quite old (dating as far back as 2012) and was in pretty bad shape. I did appreciate the depictions of a rooster and other farmed animals, though.

And there you have the best of the street art in Braga. If you’re still hungry for more, here are a few more pieces I stumbled on. I probably wouldn’t go out of my way for these, though: 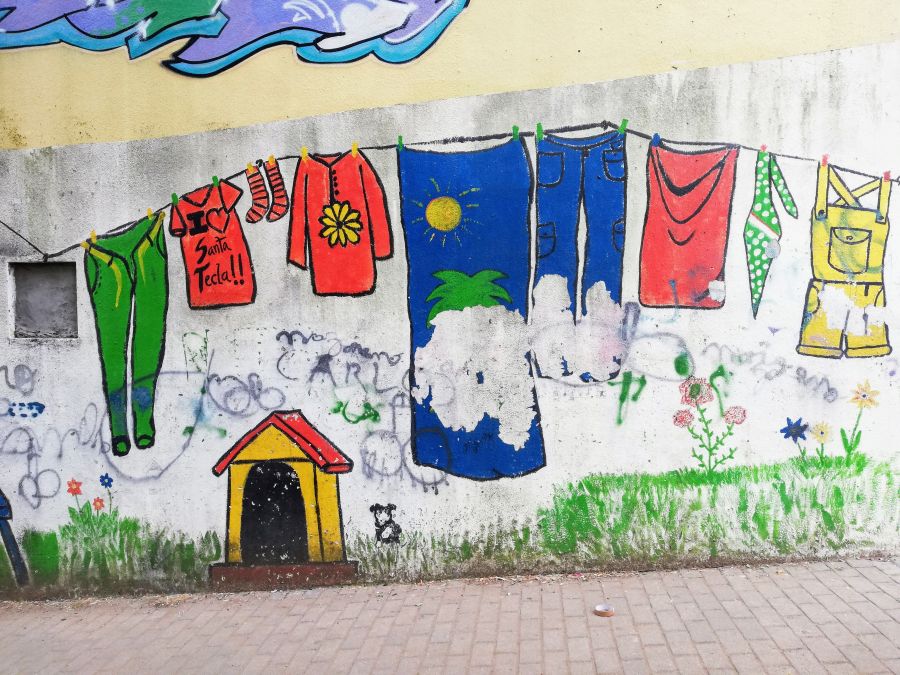 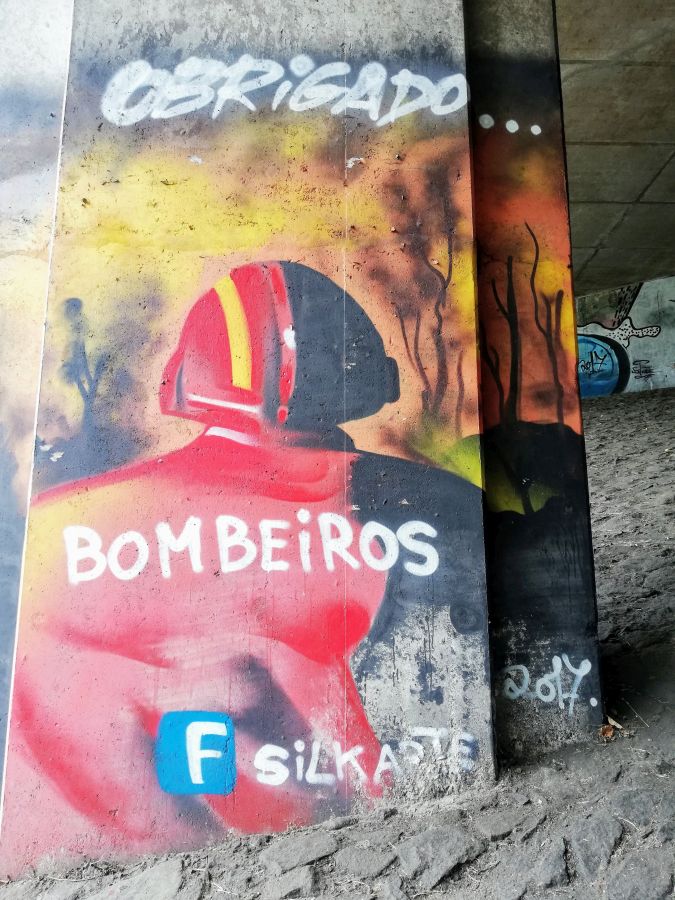 Tribute to firefighters painted by silkarte in 2017, when Portugal was ravaged by devastating forest fires. 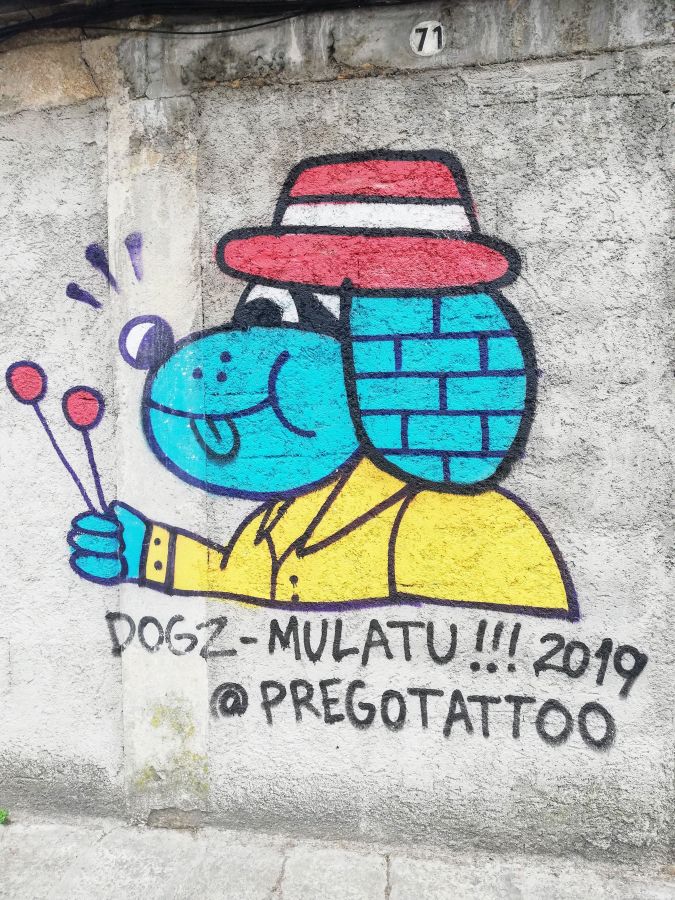 One of few murals within Braga's city center. It's in between the Arco da Porta Nova and the Museu dos Biscaínhos. 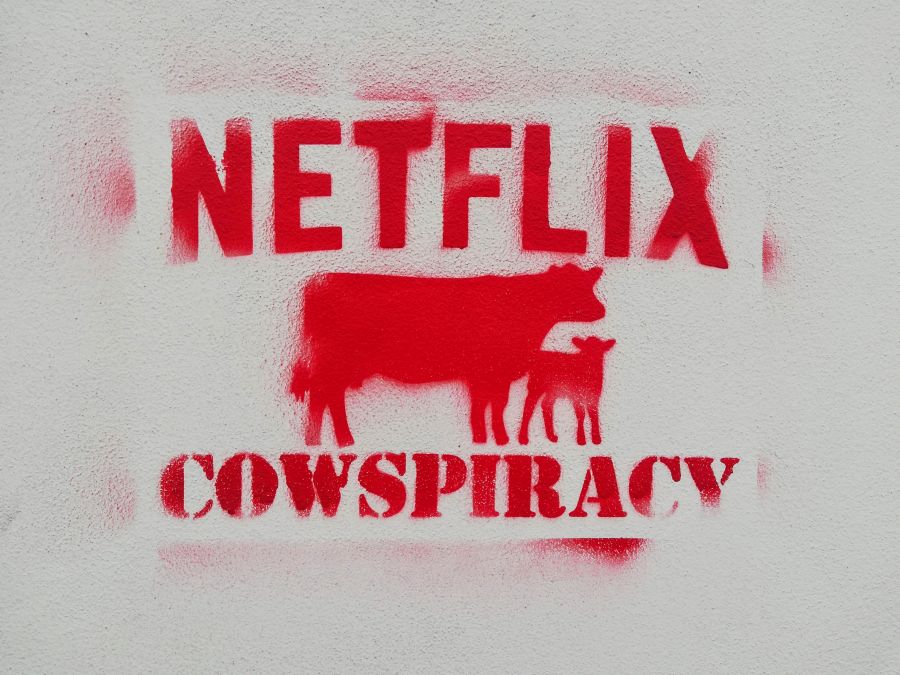 This one is more activism than art, but I was excited to see this plug for the documentary Cowspiracy. If you care about saving the planet and you haven’t watched Cowspiracy yet, go do that right now.

It seems to be available for free on YouTube, at least for the moment. You can also watch it on Netflix.

Where to Stay in Braga 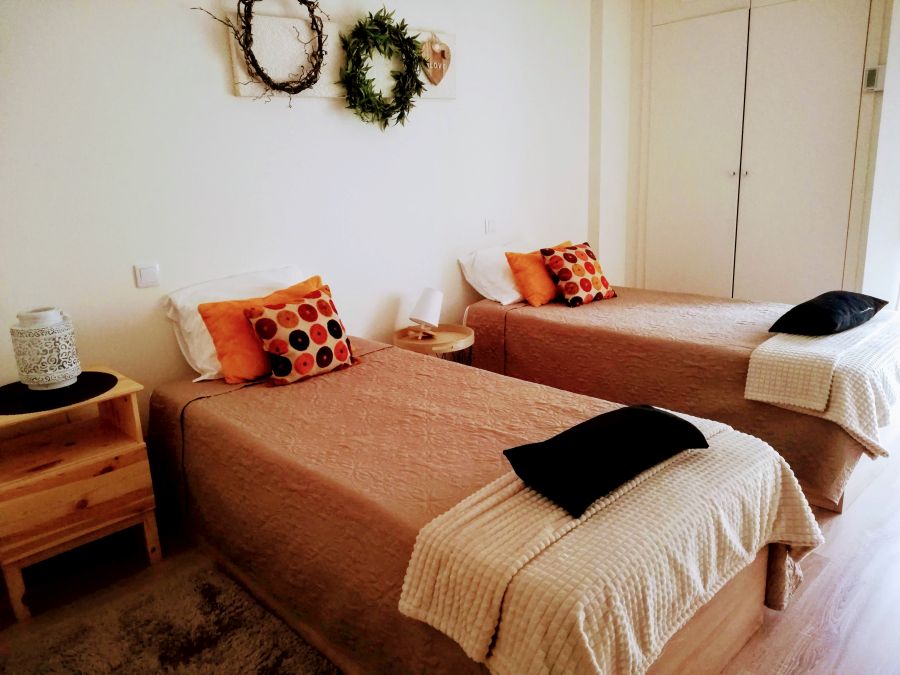 I stayed in this AirBnB apartment, which was great value and conveniently located near some of the best street art in Braga. It’s close to the Ecovia and the underground pedestrian tunnels on Avenida da Liberdade, and about an 18-minute walk from Camping Braga.

And if you're wondering where to eat in Braga, here's a guide to my favorite restaurants in the city. 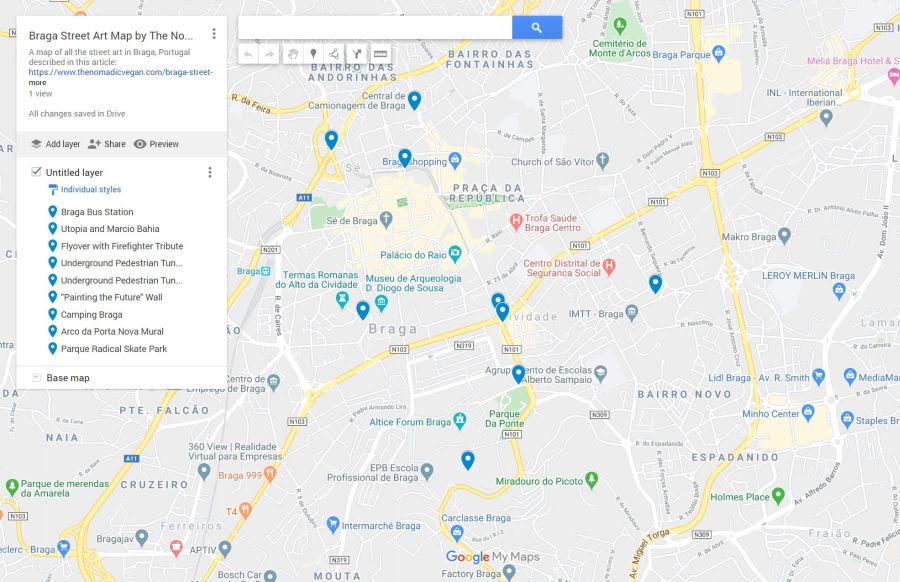 Here’s a map of all the street art spots in Braga, Portugal described in this article. Click here to view it in Google Maps.

Big thanks to Frederico from @urban_art_porto for helping me find some of these walls. Do you know of any that I missed? Let me know in the comments below! 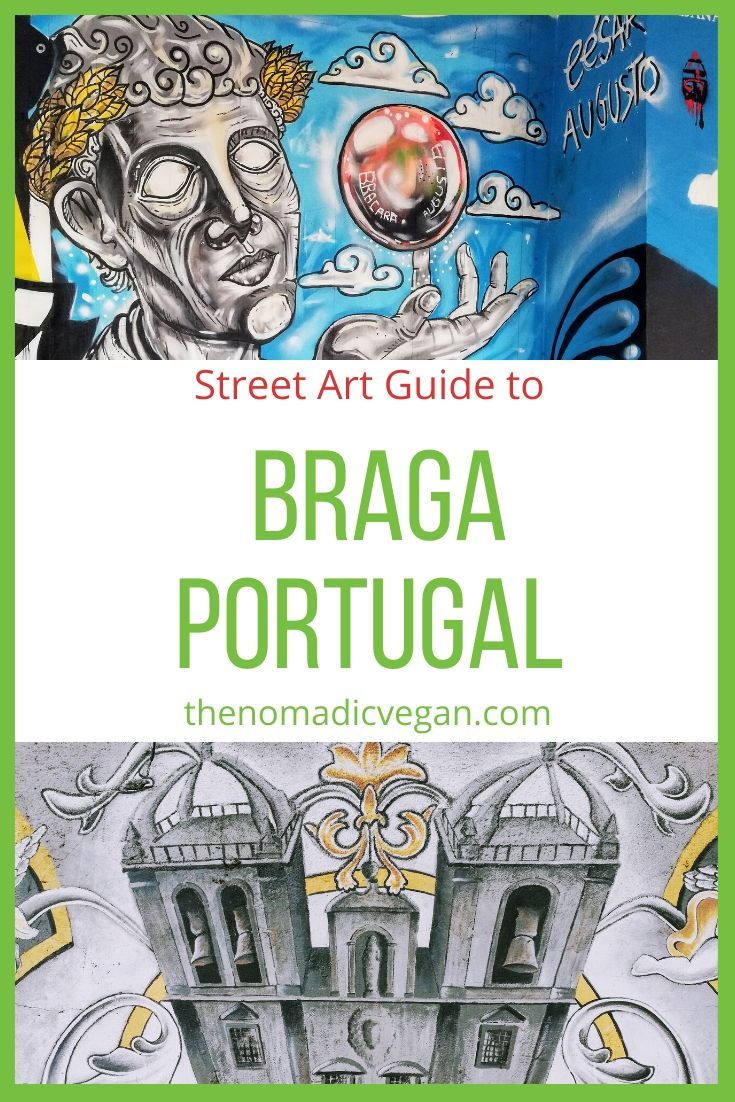 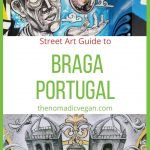